Ha Noi is a city of conflicts and, as such, it is difficult to either get your head around it or to truly feel comfortable with.  Because of this the AmaWaterway’s pre-cruise land extension is a bit of a mixed bag…but only because of the nature of the city.  In other words, “Ya gotta work with what ya got” and, I think, AmaWaterways is doing a very good job.

However, you really need to use that free time to get out on your own to have a true sense of travel and fulfillment. And we have done our best (considering the long flights and short time we had to deal with).

Ha Noi is really a very manageable city as it is small and the roads are well laid out with traffic signals, crosswalks and good signage.  There is much hype about the traffic (thousand and thousands of motorcycles), but it is actually very polite.  And the streets seem quite safe in the areas a tourist might wander as well, so be a bit adventurous.

Last evening we found our way to Quan an Ngon, a rather famous restaurant about a 20 minute walk from the Sofitel Metropole hotel visited by locals and tourists which has a great way to introduce you to street food.  The center is filled with tables (choose inside or outside) and it is surrounded by food stalls with each one having a specialty.  Our group of six decided to opt for a bit of air conditioning (just a bit!) and sat inside.  The menu has a huge variety of foods. 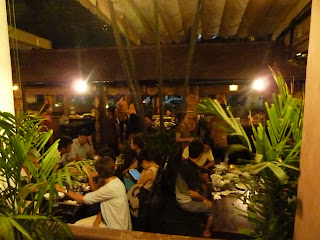 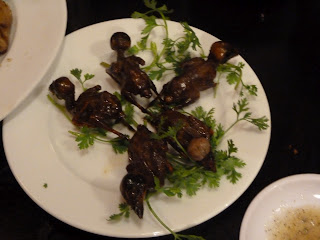 I opted for a starter of Salad with Sparrows…which wound up being sparrows with a little bit of greens.  I really had no idea how they would taste or really how to eat them, but it wasn’t hard to figure out and they were very tasty; smoky and tasting a bit like pheasant (stronger than quail).  I am sure I left bits that the Vietnamese would eat, but I chalk that up to a lack of technique.

This was followed by an absolutely delicious freshwater Crab with Tamarind Sauce.  It was presented picture postcard beautiful and then the waiter did all the work cracking the crab open for me. 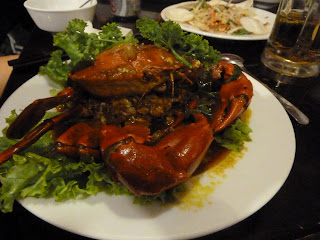 After dinner we took rickshaw (peddle taxis) back to the hotel as the walk seemed just a bit too long after a great meal and, of course, after our 27 hour trip.  It seemed a bit pricy at $4.00, but I was happy to overspend by local standards and get back to the hotel with little effort.  A gin and tonic in the hotel bar and it was off to sleep; knowing the pre-tour meeting was scheduled for 8:30 a.m.

It was then that it hit me a bit hard…and it grew on me throughout today (the next day).  Ha Noi has for centuries had two worlds living in tension with each other.  The posh privileged few and the Vietnamese.  Even in just a few hours in this city you gain a bit of perspective about the resentment and disdain for the French imperialism and colonialism and the “American War”.  But I do not want to get ahead of myself.

After a truly fantastic breakfast with just about anything you would want (Vietnamese or Western) it was time for our orientation meeting.  Our group is just short of 40, but it is broken down into two smaller groups; each with a dedicated local guide.  The whole group, however, has a tour/cruise director that follows the group through the entire 15 days.  As my kids say, “I’m not going to lie”. The orientation meeting was not my favorite thing, but I also understand why it is both necessary and painfully repetitious:  The guests.  Some are seasoned travelers and are ready to roll.  There are some others that make you wonder how they were not advised that this trip might be a bit too difficult for them either logistically or physically or both.

With the meeting done it was time to head off.

Our first visit was the Hanoi Hilton prison.  It was as interesting as disturbing and as eye-opening as propaganda-filled.  While the majority of the prison was demolished to make room for two modern high rises, what remains leaves you with strong emotions.  Built by the French to imprison non-compliant Vietnamese, the conditions were horrific and just to underscore the terror of the place, one of the two guillotines remains with a couple of very graphic photos. 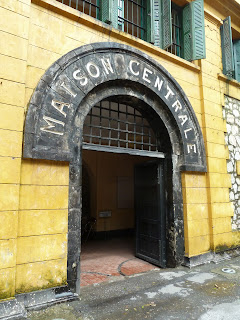 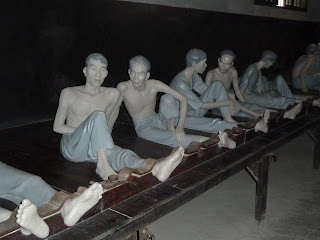 But then the propaganda started with how the prison also housed American airmen, but they were not treated the same way showing us two rooms with black and white marble floors (rather than the concrete in the rest of the prison), an allegedly typical bed (rather than concrete with common foot shackles) and, of course, a small church display…along with photos of American politicians and a video describing the American bombings, etc. (Whispers of the torture were noted, but those areas were described only as torture by the French.)  The conflict arising out of the similarities between the atrocities of the French and the atrocities to the Americans just cannot escape you. 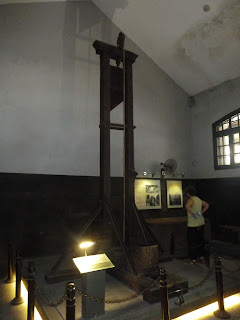 After that it was off to the Ho Chi Min Mausoleum which was, fortunately, closed without notice for the filming of a documentary. (It was interesting to see from the outside, but I did not want to stand in line in 95 degree extremely humid heat to see his mummified body for a couple of minutes.)  After that it was a short walk to the One Pillar Pagoda where we heard more propaganda about what a talented and wonderful person Ho Chi Min was.  I am no scholar on the man, but speaking 17 languages, being a talent in all of the arts, etc., etc. was a bit over the top, though expected. 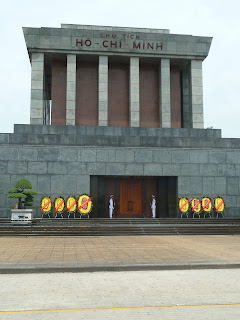 What you readily can sense is the failure to understand the difference between indoctrination and true patriotism.  The English love their queen, but can criticize the royal family.  Americans can blast their presidents, but be loyal to their country.  Here the message is not quite the same. 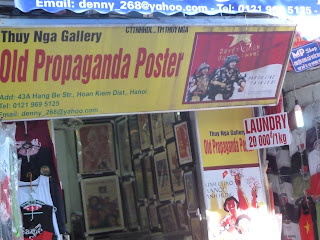 After that it was off to a Confucius temple and a discussion of education before returning to the hotel.

So after the frenetic pace and charming meals of our independent explorations, followed by a rather sobering, but important, morning…and the conclusion that Ha Noi is a “one day, two night visit” and not one which you could really appreciate isolated by tours from a cruise ship (after a 3+ hour drive), it was time to decompress at lunch time.

For some reason I did not get the memo that passport photos were needed for Cambodia so we needed to get some organized.  The AmaWaterways representative was very helpful, but I didn’t want to wait around in the middle of the afternoon to get them done, so we were told of a place ironically right next to Pho 24 so it was an easy short walk from the hotel.  Because this is Vietnam, instant passport photos take 30 minutes, so it was off to a recommended restaurant, City View, on the 5th floor of a building on the far side of the lake. 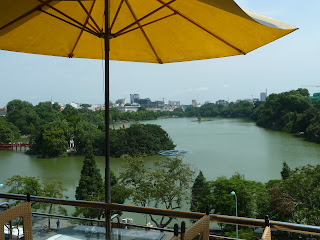 The view was nice, but the food unremarkable.  It is a reminder that while my wife and I are ready to dine “local” and I am willing to give just about anything a try, most people are neither that adventurous nor able to do the same thing.  So while I had squid and my son had duck, my daughter has penne pasta and our friends had a pizza (which, most certainly, would not be found in New York!).  My wife went with beef with garlic sauce; sort of American-Asian.  While I might have been a bit disappointed, the view and comfortable food might be perfect to many travelers.

It was then back to the photo shop and then the hotel for our 45 minute “cyclo” (bicycle rickshaw) ride through the Ancient Quarter of the city.  With incredible traffic which was always moving and never gridlocked we weaved our way through the back streets and main streets getting quick glimpses of daily live for many of the residents of Ha Noi.  If one had more time and a strong desire to spend more time in this city, walking would be more effective.  But for the time we had, we covered a lot of ground and it was both stimulating and relaxing.  (I do wish the driver could say more than “temple” or “market”, but frankly there were too many changes in what you could see to have a substantive discussion about what you just passed.)  So, settling in doing a “tourist” thing worked quite well. 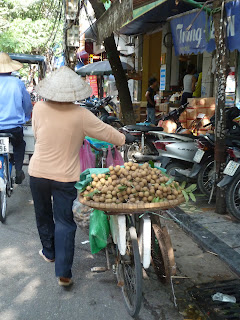 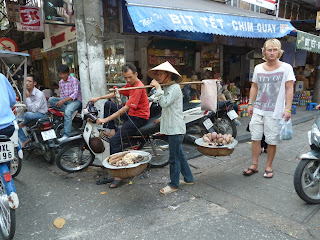 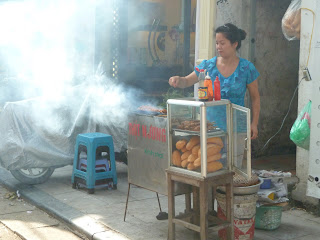 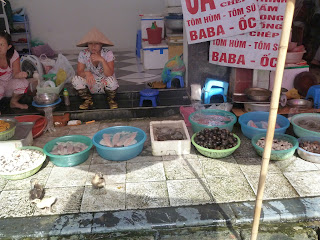 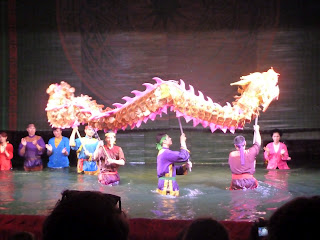 We then were shown a monument to suicide bombers who attacked the French tanks during the first efforts to break away from France before heading across the street to a Buddhist temple (just a little more propaganda about an American bomb killing a 300 year old turtle which was mummified and on display) and then to a Water Puppet Show (which I could have easily missed) before returning to the hotel to collapse both physically and mentally.

Knowing we have to be up and our luggage out for 6:30 a.m. before we head to the beautiful, tranquil and much anticipated Halong Bay, it was an early night.

In short term reflecting on my time in Ha Noi, I am very glad I came here and that I brought our children here.  We all learned a lot, enjoyed new foods, had fun with the traffic, got some really good perspective and feel a bit enriched on a personal level.
Would I, fairly experienced traveler, ever recommend that Ha Noi be done independently?  Only for a very few people.  There have been strong and weak points, but considering what there is to do, trying to make sure that all types (and we are on the younger side…much younger side…of this group’s demographic) enjoy their experience  – within or close to their travel comfort levels – AmaWaterways does a really nice job.
Much has happened…and we are only getting started!