Antarctica and Patagonia: An Adventure on the Seabourn Quest – Part IV (Torgersen Island/Neko Harbor – “The Lifting of the Fog!”)

The eight day of our Antarctic Adventure on the Seabourn Quest started with a dense fog.  It was so dense the first group on the zodiacs needed the ship’s bridge to safely guide them back after exploring the nearby islands.

But, alas, that was not the most dense fog that was lifted.  It was those of the guests.  There was something magical about that evening where the sometimes staid manner of many Seabourn guests were abandoned and the ship became truly energized. But I shall not get ahead of myself.

This day was scheduled for a zodiac tour of the area around the Palmer Station, the United States totally non-military research station.  I was in the last group which was to depart mid-afternoon which became late afternoon as the fog slowed everything down.

Now, while it was nice for me to have a day of leisure…while wondering what, if anything, I might eventually see through the fog…if our tour wasn’t cancelled, what I found to be remarkable is the Seabourn Expedition Team.  Due to the delays and logistics, these talented women and men endured a 12 hour day in cold, moist, foggy conditions and delivered a fantastic, personal, experience for every guest; from the first group to the last.  It is one thing to have knowledgeable guides, it is another to have warm, friendly, caring people focused on every guest having their personal extraordinary experience.

And it is the dedication and personal caring of the Seabourn Expedition Team that set up what was to happen that evening because they took what could easily have been a disappointing day into one that was inspirational.

I used the day to catch up on work and to, honestly, just be a bit lazy.  I missed the talks (two of a total of 35 that will be held during this cruise) on Governing Antarctica and Female Antarctic Explorers.  I knew the contents of the first and am a bit angry with myself for missing the second.

It was finally time to board our zodiac and I was very excited to see the Palmer Research Station that I have been reading about for decades.  But I am not in Antarctica to see buildings and visiting the station was not possible.  Oh well.  But as I, personally, am focused on the wildlife, geology and glaciers that its researchers are focused on, rather than the facility, it wasn’t too much of a disappointment. I mean I did get to see it from a distance and how many people in the world have ever done that?  Perspective!

In an earlier article I had mentioned that being in the first group doesn’t mean you are in the best group…anxiousness aside.  Today proved that point.  While the first group was pretty much fogged out of seeing much, when it was my turn (in the last group) the fog had lifted and the light perfect and wildlife was very visible.  And, of course, since other groups had been out, it was well known where the animals were hanging out…so our zodiac time was very efficient.

First we visited a crabeater seal lazing on an iceberg.  It was not only being able to see this common to the Antarctic seal that was exciting, but the setting; which was breathtaking.

Then it was off to see a leopard seal, one of the top predators of the Antarctic, lazing on a “bergy bit”; looking like you just never want to mess with it.  (By the way, they are identified by their unique spots…but only those on the left side, which is a protocol that was, seemingly, randomly decided years ago.) 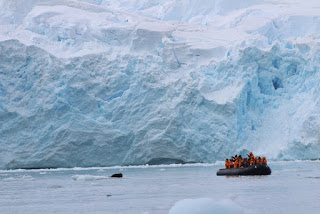 We took a short ride to see some Adelie penguins, whose numbers are plummeting due to the reduction in sea ice, but we will see more in a future landing.

While we were there we saw three elephant seals.

Also seen were kelp gulls, including some chicks, and giant petrels.

At this point you are probably thinking we had a great day and have seen the highlights.  Wrong!  In the evening Captain Bjarne Larsen maneuvered us into a portion of Neko Harbor in Andvord Bay first bringing us close to a beautiful (and huge) iceberg…and then a humpback whale show.  (Many felt bad for the human performers putting on a sparsely attended show in the Grand Salon, but alas for most this was a once-in-a-lifetime experience!) 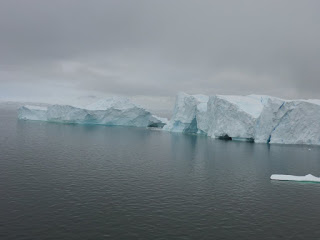 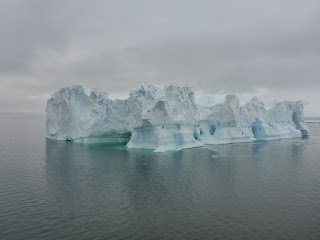 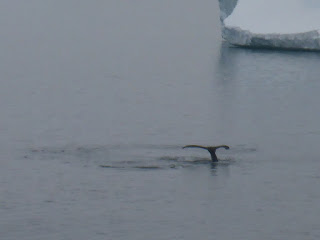 The other Fog had just lifted!  The energy and dynamic on the ship instantly changed.  People that were previously happy to talk among their small groups started talking to the other guests, becoming a closer knit community sharing their emotions.  I just sat back and watched. Magic!

After things settled and people started heading back to their suites (around midnight) I went out on deck and stayed there with a lovely young woman who similarly could not bare to miss a moment of this beautiful truly awe inspiring location with shifting light, fog, water, ice, etc.  I took a couple of photographs, but everything about the experience just couldn’t be captured so I let it flow over me.  At 2:30 a.m. it was, well and truly, time to go to bed.  (By the way, the next day she told me her photos just didn’t do it justice.  Take note when you come:  It’s not about photography.  It’s about “being”, so remember there are times to take in the views…not look through the viewfinder.) 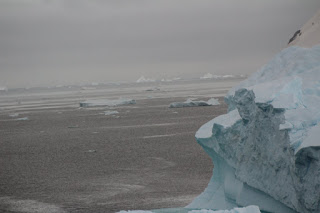 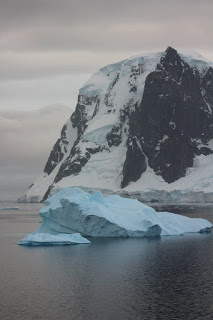 The next morning came way too soon, but then again, I couldn’t wait for it to come.  I was in the second group to board the zodiacs and land at an area that not only had a Gentoo penguin rookery  with many young – even newly hatched and about to hatch – penguins, but a short hike up a hill for just breathtaking views down to the glaciers, water and the Seabourn Quest. 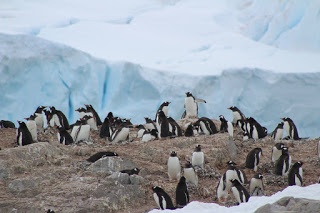 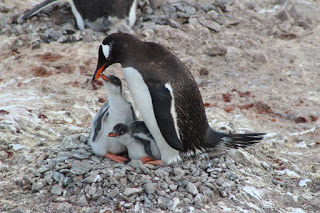 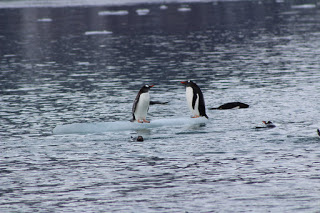 As the temperatures were around 40 degrees Fahrenheit, there were many, including me, that were overheated when reaching the rocky overlook.  While the team was very good at telling everyone to open their Seabourn Antarctic jackets, I think it would have been better to tell guests to leave the very popular downy inner jacket in their suites.

I also think it would be a good idea to teach people how to use walking sticks.  I noticed many people using them the wrong way (like putting them behind or to the sides of them).  A one minute lesson, similar to how you put on a life vest, would be a good idea.

One really cannot capture the colors and scope of view, so I spent a good bit of time just looking.  I did eventually take a few photographs, but trust me:  They do not do justice to the beauty and grandeur of the Antarctic.

I also have an admission to make:  I cheated.  I overstayed my time on shore just sitting and watching penguins.  I needed more time to “just be”.

Upon my return I had a fairly light lunch and then enjoyed a nice soak in the forward hot tub; also soaking in the views.  And with no internet in Neko Harbor due to the height of the mountains that surrounded us, I had a very peaceful afternoon.

At about 5:00 p.m. the Seabourn Quest set sail.  Standing out on deck I came across that same young woman who was so intently taking photographs in the wee hours of the morning.  She turned to me and said, “Look at that iceberg!” to which I said, “That’s the one we saw last night.”  She was stunned.  She looked around and then exclaimed, “We didn’t move.  This is where we were last night!”  Yup.  We had only moved maybe 100 yards and changed orientation.  The message: TAKE TIME TO PUT YOUR CAMERA DOWN!

I dined at The Grill by Thomas Keller where there were two additions to the menu.  My new favorite salad: Celery Victory Salad and then a (relatively) light Cottage Pie.

And the view was, as always, spectacular. 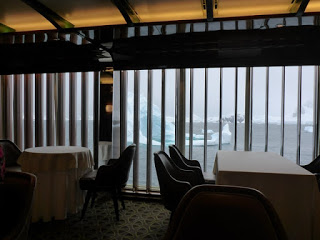 Captain Larsen had planned to navigate the Seabourn Quest through a narrow pass rather than heading out to sea to get to our next location.  He told us to be prepared for some extraordinary views at 9:00 p.m., but when we arrived the winds had picked up and there was too much ice blocking its entrance, so we had to go back to the original plan of heading out to open ocean.

There was a good bit of rocking and rolling late in the evening…and that provided me with a very good, sound, sleep.  It is something I needed as to date I have been getting up early and going to sleep late because I don’t want to miss a moment of my short time in this awe-inspiring place.