Preface:  As I write this I am sitting in my French Balcony Suite on Windstar’s Star Breeze gently rocking on a Sea Day, listening to the waves, hearing and smelling the ocean, and sipping on a Bloody Mary after finishing off my freshly brewed Americano coffee. 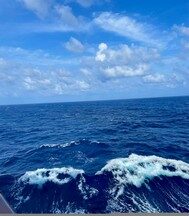 You may be wondering what it is like being in isolation on a luxury cruise ship. Oh, I don’t really mean physically, but rather emotionally, and what my overall thoughts are.

Obviously (at least I think it is obvious) my first emotion was: Damn It! I did everything right.  I isolated for over a week before this cruise. I jump through all the testing hoops. I made sure I had KN95 masks and wore them religiously, including on the ship.

My second thought was:  How the heck could someone who had to be tested before they departed and then at the airport slip through? And then it hit me:  Someone was unknowingly infected literally the day before they were leaving! I have a friend that recently was infected. I tested her for antigens right after she showed symptoms and it came back negative. It was only two days later that a PCR test said she was positive. So, in reality, there is a tiny, tiny, window where neither an antigen or PCR test is going to catch a Covid infection in its infancy.  Oh, The Improbable Weakest Link!

My third thought was one of a bit of disappointment, but moderated by the fact I am isolated in a luxury suite with a staff that cannot do enough for me, excellent cuisine, fine wines and spirits, internet, and, oh yeah, the sounds, smells, and views of French Polynesia.  I also recalled that I wasn’t exactly suffering sitting in my place in Lake Tahoe, California during the lock-downs with the sounds, smells, and views of the Sierra.  Many would consider this an upgrade.  I consider it on a par, as Tahoe sets a high bar!  (I would like Southside, my dog, to hang out with, though.)

My fourth thought was about my being able to stay on the ship rather than be moved to a hotel (probably of dubious quality) somewhere in French Polynesia. I mean I test negative, but ya’ never know!

And then it hit me!  Why the heck am I being so damn self-centered?  All of the non-isolated Windstar guests aren’t having their cruise curtailed in any way. For most of them, it is a trip of a lifetime and I would hate to have negatively impacted that…even though my only sin was to spend time with an old friend reminiscing about the good old days at Seabourn and Windstar’s fantastic future.

And then it hit me again! What about the crew, staff, and officers?  Imagine if this cruise had been shut down? What if some of them were taken off the ship?  Fortunately, that isn’t happening.

To be fair, and I joke about this all the time: This is my job!  I do have a bit of a different perspective and I know this is not my “Trip of a Lifetime” and I haven’t saved and planned and worried and had huge emotions before taking this trip. I don’t have to address the possibly differing reactions of a partner. It is easier for me.  (As I have joked on this trip: This time French Polynesia is so much easier and joyful…because my ex isn’t with me!)

Do I think my positive and chill mindset will change over the remaining 3-4 days? I don’t know, but it wouldn’t surprise me.

So let’s take this (side) journey together and find out together!