Goldring Travel’s Exploring Iceland Again: West Iceland and More – Part I (Getting There & Getting Started)

My third trip to Iceland, this time for Vestnorden 2021, a travel trade show for suppliers and operators in Greenland, Iceland, and Faroe Islands, offered me the chance to visit two other areas of Iceland: The Reykjanes Peninsula  (the location of the show) and West Iceland (my selected pre-show tour).

My journey to Iceland was incredibly convenient…other than the now expected Covid protocols.  But at this point even they are becoming pretty routine.  I just wish the routine was the same everywhere. With different routines in St. Marteen, Greece, and Iceland (other than needing to be fully vaccinated and providing a negative PCR test) it can get a bit tedious…but nothing too difficult. In Iceland you must complete a pre-entry form no sooner than 72 hours prior to your arrival attesting to the foregoing. You then receive a bar code which, unlike Greece, is actually scanned after passport control and your documents are actually checked.  (While Vestnorden was putting some sort of post-show testing in place for its US participants, I opted for the convenience of a self-test with video supervision, which is accepted for re-entry into the United States.

I had two very easy flights (Reno to Portland and then Portland to Reykjavik, Iceland). Once again Alaska Air, for my first flight, departed on time and arrived early with good service both on the ground and in the air.  My seven-hour flight to Iceland was paid for by Vestnorden so I thought I would try to take advantage of Icelandair’s bid for an upgrade. The lowest amount you could be was about $300, so I bid $310…and it was accepted.

I had a three-hour layover (that became 3.5 hours since my flight arrived early) in Portland and figured there had to be a lounge I could use between American Express Platinum, Priority Pass, United Club (since I am a lifetime member) and Icelandair’s First Class amenity being a lounge (which was the United Club lounge). With no Amex or Priority Pass options, I headed to the Icelandair desk for my pass to whatever substitute they had the United Club, which had been closed due to Covid. I was told unfortunately the United Club was closed and there was no lounge. Ugh.

So I wandered over to Terminal D (where I was, of course, flying out of the second to last gate) and along the way I noticed the doors to the United Club open so I went in. Bingo!  The United Club had just opened two days earlier. Not so fast, however! United once again cut my lifetime – that is lifetime – benefits. It went from access without requiring I was flying (you were given a pass to get through TSA when that was established) to limiting me to the lesser lounges when many were converted to Polaris lounges, to requiring I be flying that day to, now, I have to be flying on United or any Star Alliance partner.

But, wait! I had the Icelandair amenity…or so I thought. When I was initially denied entry I was advised Icelandair hadn’t renewed its contract to use the lounge. However, with plenty of time, my additional United Million Miler status and, importantly, a smile, an exception was made and I was in!  The Portland United Club was small but actually quite pleasant and comfortable. And there was actual quality food. Unfortunately, Oregon has some prohibition about serving spirits, so it was beer or wine only.

Icelandair flies an older Boeing 757-200 with seats akin to domestic first-class  non-lie-flat seats in a  2-2 configuration. Happy to have my favored bulkhead aisle (well worn) seat, I was happier when I received some of what we used to expect from First Class. After a glass of sparkling wine I was given a high-quality beverage list with a wide variety of spirits (including an expanded gin list with quality English tonic) and six different wines. After a couple of gin and tonics a three-course dinner was served all at once. Small but tasty grilled shrimp salad followed by a quality fresh (and large) complex salad with cold chicken; far better than what I received on United’s Polaris class flying to Greece.  And the wine was free-flowing.

On the other hand, the movies were about as old as the plane!  I actually didn’t mind as I have been listening to Little Steven van Zandt’s new book, Unrequited Infatuations; a compelling and interesting autobiography from, as most would know him, Bruce Springsteen’s consiglieri and so much more. While he is older, we both lived in the same area and, well, have that Jersey attitude and crossed many of the same paths. Combining that with his incredible and successful efforts to shut down apartheid-exploiting Sun City in South Africa and the freeing of Nelson Mandela and his independent life in politics and rock n’ roll, plus incredibly deprecating humor, I had to force myself to stop listening so I could get some sleep. (BTW, this is one book that you need to purchase the audiobook as his Jersey accent and conversational style has me laughing out loud again and again!)

Arriving in Keflavik Airport, which is about 45 minutes outside of Reykjavik, you go through passport control – which doesn’t care about anything other than your passport – pick up your luggage (and mine was there!) and just as you think you are about to exit the airport there is a second line to have your passport, vaccination card, pre-registration bar code and negative PCR test presented and approved. I guess they do it backwards due to not being able to reconfigure the airport so that it happens first. Regardless, it works efficiently.

And once you are through the process, you can put your masks away and not think about them until your departure…unless you want to.

A 15-minute taxi ride was about US$30; reminding me how expensive Iceland is…and what a great value this seven day Icelandic experience is.  As I was arriving very early morning and my pre-show three day tour of Western Iceland wasn’t picking me up until sometime after 5:00 PM, I booked a hotel room at Hotel Keflavik (where I will be staying during the trade show) for the night before and that night. That way at 6:45 AM I could head right to my room and had a place to relax until I was picked up…and the hotel would store my luggage I wouldn’t need for the tour plus I received  breakfast…and dining in Iceland is crazy expensive!

One thing to note is that Iceland does not have any true luxury hotels. The Hotel Keflavik is the best hotel in this region and pitches itself as a four star property. While the Moet & Chandon vending machine is fun, you must keep in mind that an Icelandic four-star hotel is a three-star hotel in the United States and most of Europe. 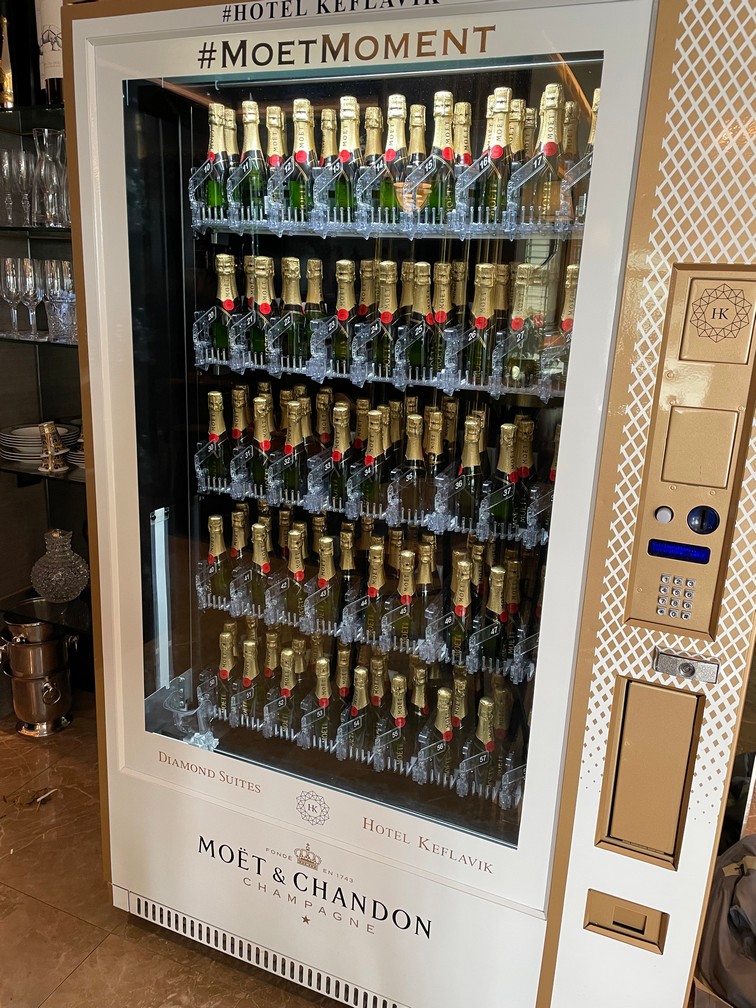 After a shower and a short nap, it was time to explore!  I headed to the seaside and some very strong winds!  With the temperatures in the 40s it was refreshing; just what I needed. While I will be seeing more of Keflavik during the trade show – including heading back to the nearby Blue Lagoon – what I found was a small town (population 18,500) with a good bit of commercial properties and a small fishing fleet.  As it was early on Saturday morning (with sunrise not until about 8:00 AM) I didn’t see but a few people on the streets.  What I did see was a hiking trail up along the cliffs for a pleasant walk, though with the wind and being late into the season any chance of seabird-watching were frustrated. I still found some beautiful views before walking most of the town…which was still asleep when I finished my 4+ mile wander.

I was then picked up for my tour and we were off on a 1.5 hour drive to Borgarnes along with southwest coast of Iceland. Our small group was diverse with most being German or American with one French and one Russian living and working in Italy.  It was refreshing to be spending time in a truly international environment again. It has been too long!

As with every drive in Iceland, it was a truly beautiful, as Iceland’s beauty and diversity never ceases to amaze.

We arrived Borgarnes for dinner at Engledingavik, a quaint Icelandic seafood restaurant. But before we entered the restaurant we were invited into a small house with “a historic doll collection” for a glass of sparkling wine. What they didn’t say was that it was a house filled with really creepy dolls!  I mean all I could think is of being trapped in there in the middle of winter and the dolls starting to attack! 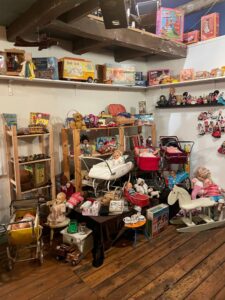 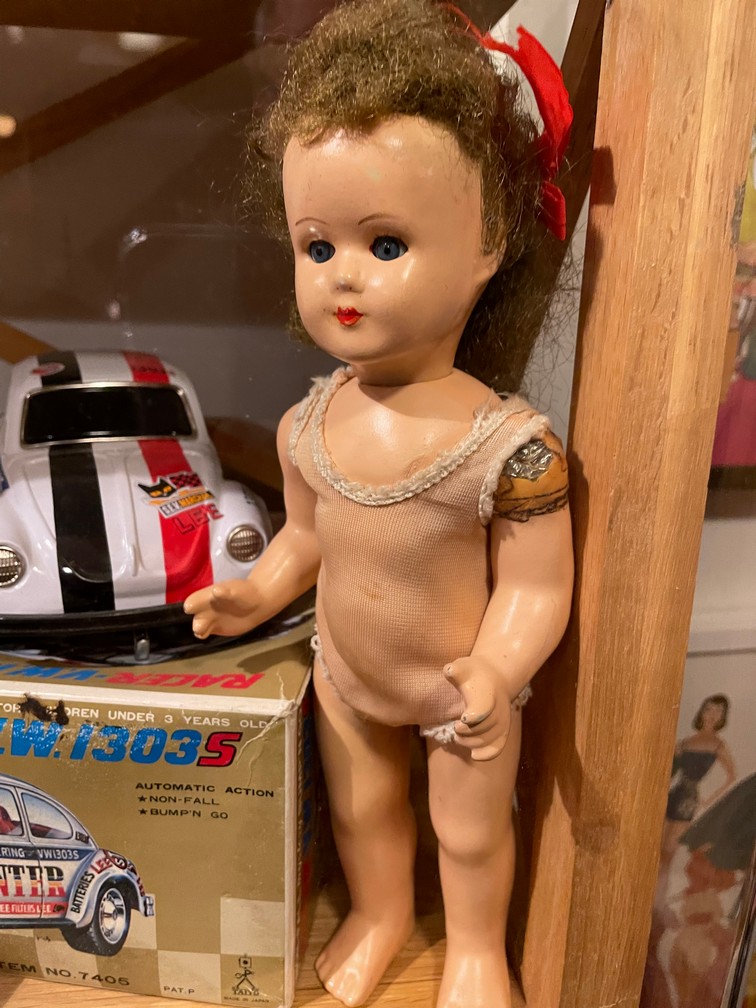 That curious but forever memorable first stop was followed by an excellent dinner. We started with a perfectly prepared and delicious Cod with Risotto and Garlic Sauce followed by very tasty Lamb Chops with Pesto. The lamb was clearly local and had more flavor; almost a bit herbaceous. 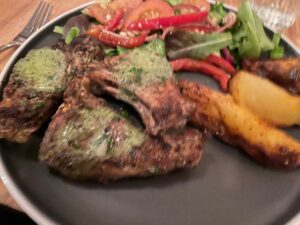 After a quick visit to a local museum it was off for another 40 minute drive to the Snaefellsnes Peninsula for an over night at the Lava Water Guesthouse.

By the time we arrived it was dark and in the countryside it is “dark”. A beautifully lit main house greeted us with the smell of a wood fire and a cocktail (small, but nice, whisky selection).  After a long day, it was time to experience one of the guest houses. It was a little weird that we had two people sharing each house, though we had separate bedrooms. Great for families or couples traveling together.

Considering the distances covered and how late we started we did and saw a lot, with so much more to come!