I have always been fascinated by Quark Expeditions, which specializes in only Polar Expeditions (North and South). Founded in 1991 as an expedition company with many impressive accomplishments including, but not limited to the bringing first group of travelers to the North Pole, making the first non-scientific visit to Emperor Penguin rookeries, and making expeditions to very remote areas of Russia.

Clearly, it was – was – not because of its amazing ships, luxury service, and culinary experiences (I would have been seriously disappointed), but because of its more “Get Out There” approach that was – was – more akin to the experiences of my youth on old marine science vessels and bobbing around in the North Atlantic, for example, off the coast of Maine on the Isles of Shoals or wandering through salt marshes or the Everglades.

And, in order to deliver these extraordinary expeditions, Quark Expeditions has always had some pretty amazing, seriously experienced, “Get Out There” guides…and guides that return year after year!  (A nice touch is that you can access short biographies for each guide on the Quark Expeditions website.)

Oh, but those older ships and limited services onboard kept me from exploring further. I mean the last time I saw a Quark Expedition ship was in Ushuaia, January 2020, when my expedition on the Seabourn Quest stopped there. It was the Ocean Adventurer, a circa 1975 vessel with fixed twin/triple bunks and the not so blazing speed of 12 knotsn.  A totally unfair comparison and clearly delivering a more “rustic” expedition experience or a totally different demographic.

In 2016 when Quark Expeditions was sold by TUI Travel (which was really more focused on UK package holidays and air travel) to Traveltopia things began to change – and changed a lot – because now Quark Expeditions was owned by a company that focuses in large part on expeditions (and other specialized travel) and which also has the financial backing to develop their products.

With its new owners, Quark Expeditions chartered the World Explorer, a near-luxury ship (operated in the Spring and Fall by its owner, Mystic Cruises), built in 2019. This really upped its game both with the quality of the ship and the services provided. Second, it has built its own purpose-built expedition ship, the Ultramarine, which – as of December 2020 – is reading for final fit-out and sea trials.  (I will discuss these ships in more detail below.)

It is with “new” and improved” Quark Expeditions that puts it into the premium expedition market and, thus, of enthusiastic interest to Goldring Travel.

So let’s dive into the newest ships and what the Quark Expeditions polar experiences are like on the Ultramarine and World Explorer.  And just to make it more interesting, courtesy of Quark Expeditions, I will be sailing on the Ultramarine on May 16, 2021, on its 12 night Spitsbergen Explorer sailing…Covid-19 dependent.  (Not to worry! You know me and I always give my honest opinions!)

Because of the singular focus on these Once in a Lifetime destinations, the fact that expedition cruising is not inexpensive (generally around $1,000 per person per day…though some less expensive options are available), and most of the expeditions require at least 14 days of total travel time, Quark Expeditions demographic is generally 50 years and older (but on its older ships the demographic skews quite a bit younger) and only about 10% of the guests are repeaters.

Quark Expeditions, on these two new vessels, is a premium (not a luxury) product, striking a balance between comfort, service, and pricing. As such it is a very, but not all, inclusive product. 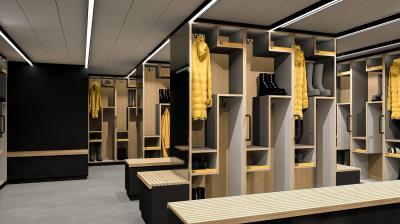 This leads to a water-level marina where its 20 zodiacs – stored just forward of it – are launched. (If you have ever been on a ship where the swell creates issues as you climb up 4-6 feet, you can understand how this will make for quicker and safer operations). You can also board zodiacs port and starboard, so getting guests out for landings is a much faster operation.

Accommodations on the Ultramarine range from 226 square feet plus a 52 square foot Balcony Suite, a 299 square foot plus 70 square foot balcony Deluxe Balcony Suite as well as a few Solo Panorama Suites at 132 square feet with floor to ceiling windows (a great way to avoid the single supplement). Added to that are spacious oceanview suites, including triples, and premium suites including the 563 square foot Ultra Suite with its bath and a half and dining area.  Note: Quark Expeditions offers sharing of suites, so if you don’t mind sharing with a stranger, you can also avoid a single supplement. 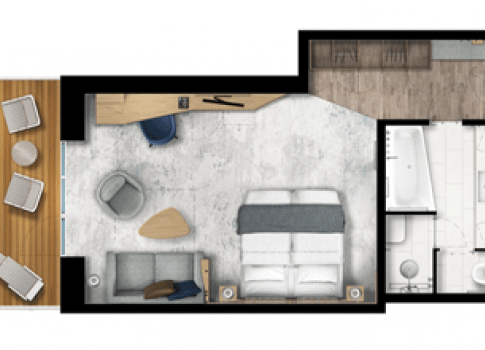 You can expect two zodiac landings or cruises most days during the expedition portion of your journey, but Quark Expedition’s differentiators are the Included Activities and Adventure Options.

Each Ultramarine journey (where permitted) has, as an Included Activity, a 10-15 minute helicopter tour (in groups of 7-9 guests) in one of its two twin-engine helicopters.  You will also have a Polar Plunge and Hiking as Included Activities on both ships.  [NOTE: I am not a proponent of helicopter tours over sensitive environmental areas or which interfere with the onboard experience.  For example, they are not available on the Spitsbergen Explorer expedition I will hopefully be taking]

Adventure Options obviously vary by destination. They can include things such as:

The Shipboard Experience: What is Included and What is Not

Included in the expedition fare:

Items that are not included are:

While there will be Covid-19 modifications, Quark Expeditions has offered buffet breakfast (standard North American fare along with an omelet station) and lunches (North American hot and cold offerings, along with pastas and paninis and some with a more culinary interest, such as pad thai) and a seated dinner including 2-3 appetizers (ex. Vidalia Onion Tart); 2 soups (ex. Hot & Sour Shrimp), 3 entrees of meat, fish, and vegetarian (ex. Pork Medallions, Sea Bass, Quesadilla)  and 2 desserts (apparently with a real focus on chocolate!). Grilled salmon and chicken, as well as steak is always available. Deck barbecues are also offered.
Dining options between meals is not a focus of Quark Expeditions, but snacks, cookies, pastries, and light sandwiches are available.  There is no room service. (Vegetarian, vegan, and gluten-free needs can be accommodated. Due to the galley setup kosher cannot.)
Entertainment onboard is essentially your Expedition Team’s lectures and your fellow travelers, along with such things as a Game Night, Charity Auction, etc. A Library and a small, but fairly well equipped, Fitness Center/Spa/Sauna are provided. On the chartered World Explorer there is also a small casino.
One quirk with Quark Expeditions is that it has Mandatory Transfer packages in addition to the expedition fare. I think they should be included in the pricing, but I guess it is a marketing decision.  Basically, due to logistics when on expedition, there is a need to have everyone together and orientated before arrival at the ship (which can be in a remote location or not easily accessible by standard flights).  On each sailing you purchase a package that includes a pre-expedition overnight hotel stay and a transfer (including air transfers) to/from the ship. Pricing varies by destination from about $995 to $2,500+ per person. It most certainly provides a more seamless and less chaotic experience. But keep in mind that while your hotel is included on the way to the ship, it may well not be included after your return flight.

As I mentioned, Quark Expeditions only operates in the Polar Regions, focused on each’s summer season.
In the Arctic Summer expeditions are available to explore, in broad terms:

Keep in mind that each area may utilize different ships and itineraries.
In the Antarctic summer expeditions visit:

There are, of course, some other unique expedition experiences.

If you are looking for an active, unique, expedition experience that is somewhere between rustic and luxury and which focuses on the most important part of your journey: The Expedition, Quark Expeditions is definitely worth a hard look.

Interested in exploring Quark Expeditions further? Give me a call, drop me an email, or send me a Facebook message!