l have been anticipating my Quark Expeditions journey for a long time…and it is finally here!

Back in 2020, I was contacted by Quark Expeditions about experiencing it’s brand new, not yet even completed, Ultramarine and I was very excited for two reasons:

And now, with the time that has frustratingly passed actually being a blessing, I am heading off to a Northwest Passage Expedition on the Ultramarine (and, in the interim, was able to experience Svalbard on another expedition ship – which definitely gave me a bit more perspective and understanding of the northern polar regions for this journey).

One thing I didn’t really understand before – or even during – my first Antarctica expedition was how important (and emotional) the original expeditions to the region…and the actual people…are to understanding the region.  In retrospect, I know I missed out on some levels and, while I have been blessed with filling them in over my other three journeys to Antarctica, it still bothers me I wasn’t fully engaged from the start.

In the Nunavut and Greenland areas that we will be exploring there are two competing histories: The Inuit people (including those that were “relocated” to the Nunavut area by the Canadian government) and the first European explorers. So this time I am starting out this expedition a bit more prepared and a bit more engaged in the culture, history, and politics right from the start.

What I can now say, as I prepare for this expedition, is that Quark provides excellent documentation, including detailed biographies of each person on your expedition team.  (There are 18 expedition team members on this journey.) The documentation is all electronic, but very well presented. (No fancy presentation box, etc.) I feel that I have been kept well informed and have more than enough information to get me excited rather than wondering about what will be happening.

And, Quark appears to be pretty fleet on its feet when it comes to unexpected changes…something that is happening often nowadays, as the travel industry gets back on its feet.  You see, the plan was for me to fly to Toronto, Canada to meet up with Quark for an overnight at the Sheraton airport hotel and then fly to Resolute, Canada up in the far north in Nunavut, Canada (an area that covers the majority of the Canadian Arctic archipelago; formed in 1999 by being carved out of the eastern portion of The Northwest Territory as the traditional lands of the Inuit people.)  See what I mean about me being more engaged in the culture, history, and politics right up front!

But plans changed due to – you guessed it – aircraft issues. Aside from Air Canada changing and then canceling my flights, so I had to rebook on United, it seems the air charter company couldn’t fulfill its obligations to Quark. (Apparently, there are three planes of sufficient size that can land on Resolute’s “runway” and this particular charter company owns two of them…and they are having “technical issues” – broken?) so…Quark – being nimble – was able to secure a charter flight but not from Toronto and not to Resolute!

I pause!  It was – if you can believe it – a relatively uneventful trip from Lake Tahoe to Toronto, other than having to endure a 3:00 AM wakeup.  Both of my flights actually arrived early and my luggage arrived with me!  In fact, as terrible as the Toronto airport is known to be, it took me only 30 minutes to deplane, get through Immigration, grab my luggage (which was waiting for me in baggage claim), and be at the curb waiting for the shuttle to the Sheraton…which, unfortunately, took the same amount of time to pick me up.  (Even still, can you believe I made it from the plane to the hotel in literally an hour? I am still stunned! LOL)

At check-in, I was provided a very detailed updated itinerary for the next 12 hours…including the air charter company and flight number.  (Nothing was omitted. Amazing!)  My instructions also included my checking in with Quark Expeditions, which had a full team present.  (Quark is headquartered in Toronto.)  It is a three-step process: Turn in your required documents (proof of vaccination, PCR test results, health form); take an antigen test; and, finally, get your parka.

Quark is still hyper-focused on avoiding any Covid issues. So not only did I have to present proof of being vaccinated and a negative rapid PCR test taken within 72 hours of boarding the ship, but was – during check-in – given an antigen test along with a Mandatory Mask Mandate for pretty much anytime other than when outside.  Yes, that includes on the bus, plane and ship even though everyone has been vaccinated and Double Tested.

I must pause and state that scientifically, after the vaccinations and all of the testing, the masking is not actually going to do much of anything.  But it really comes down to two things: The Canadian mask protocols and “better safe than sorry” (especially when we are going to be interacting with remote indigenous people).  Regardless, by complying, I get to journey to the Northwest Passage and engage in this very special cultural experience.  And, to be honest, the biggest hassle is going back to remembering to grab a mask before I leave my suite.  There is no question, I feel better knowing the chance of any real issue impacting my, or anyone else’s, expedition is minimal…so the “cost” is minimal, if any.

Back to the journey!

I was up at 3:00 AM (just like the day before, Ugh) for a quick light breakfast and a 4:00 AM three-hour bus to Niagara Falls, New York for a flight to Kangerlussuaq, Greenland.  So I had to, after clearing immigration into Canada only hours earlier, clear back through US immigration!  It would have been two hours, but US Immigration (oh were they a testy bunch) took over an hour to clear two of the three buses.

We arrived at the Niagara Falls International Airport (yes, there is such a thing) to find our National Airlines Boeing 757 waiting for us on the tarmac.  After an interesting “al fresco” security check, we boarded. The plane was so old it still had tv monitors hanging from the ceiling above the aisle, but it worked, was clean, the flight attendants were nice and it did offer a few online movies along with breakfast sandwiches. (Nice paint job too!) 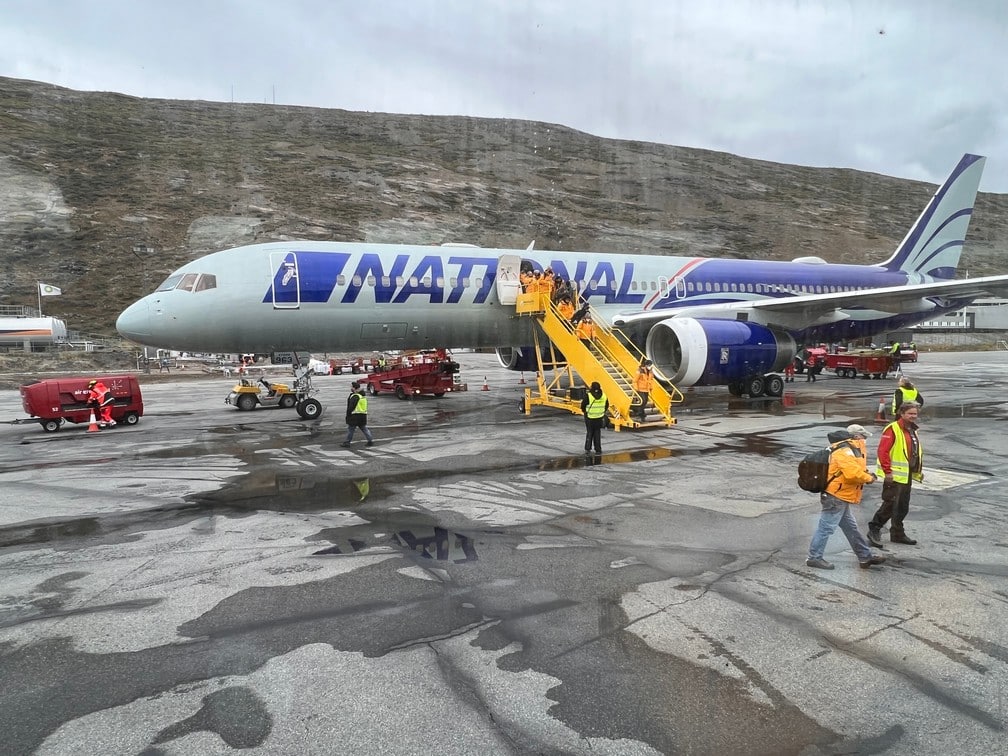 It was a three-hour, forty-five-minute flight to Kangerlussuaq, Greenland.  (The total population of the entirety of Greenland is approximately 58,000 and only about 500 live there.) This international airport was even smaller than Niagara Falls – essentially a landing strip – where we were met by a hodge-podge of buses to take us on a 20-minute ride over marginal roads to the rustic pier.  We were then greeted by a very enthusiastic group of Quark Expedition Team members…and quickly transferred by zodiac to the Ultramarine.

Instantly I was impressed. Not only by the quality of the expedition team, the deck team, and the overall positive attitudes, but the ship itself.

Before I get into why the Ultramarine is far better in person than it seems on paper (and that is pretty darn good), let me get back to the itinerary change…or should I say a change from the changed itinerary? (It is an expedition after all!)  After boarding at the southernmost point of our expedition – where we will also end our journey – we were to be heading north to where we were supposed to start, but we are not – as the second itinerary said – traveling North. Instead, we are going to travel due west back to Canada to re-enter it so that we are “legal” when we head north to near our original starting point of Resolute (actually, Beechy Island).

Suffice it to say, lots of mostly electronic paperwork, but Quark Expeditions not only had detailed instructions printed out and waiting, but on the back side of the instructions were images that you could follow if the words weren’t enough. Bravo!

So, second itinerary change in place, on Day 2 we will visit a Canada-located indigenous community on a small island just off the coast of Baffin Island…where Quark is literally flying in the immigration officers.  I look at this as a bonus as this visit was not originally planned and, for me it is a very interesting start to our culinary, cultural, and nature expedition.  (Did I mention this is an Inuit Culinary Expedition with two Inuit chefs onboard? I will be joining a Tundra to Table dinner during this expedition…but, as with so much, more on that in another article!)

Fortunately, due to the speed of Ultramarine, the overall itinerary, and Quark Expedition’s desire to put the expedition experience to the fore, there actually will be very little that I will miss.  But also, as you should know from my prior travels, there may well be a lot to see as we travel north!

Upon boarding the ship, it was an immediate escort to my suite. I am in the lowest category of Balcony Suite and, to be honest, without seeing any of the larger suites, this is one of the best-designed suites I have been in. (I will give you a detailed description in my next article.)

After unpacking my carry-on and backpack I took a quick wander around the ship and could feel three things: Quality, Expedition, and – and this shocked me – some real Luxury being delivered from a truly premium expedition product.

But, as we arrived onboard around 5:00 PM, it was a quick evening.  After an Orientation Lecture it was time for dinner, which was – again – surprisingly better than I expected…

and then, exhausted, time for bed.

Oh, you thought that would be the end of my “Getting There”? Nope.

Ironically, at 3:00 AM (three times lucky!) there was an announcement: Northern Lights! So it was out onto my balcony for a quick, and magical, light show. 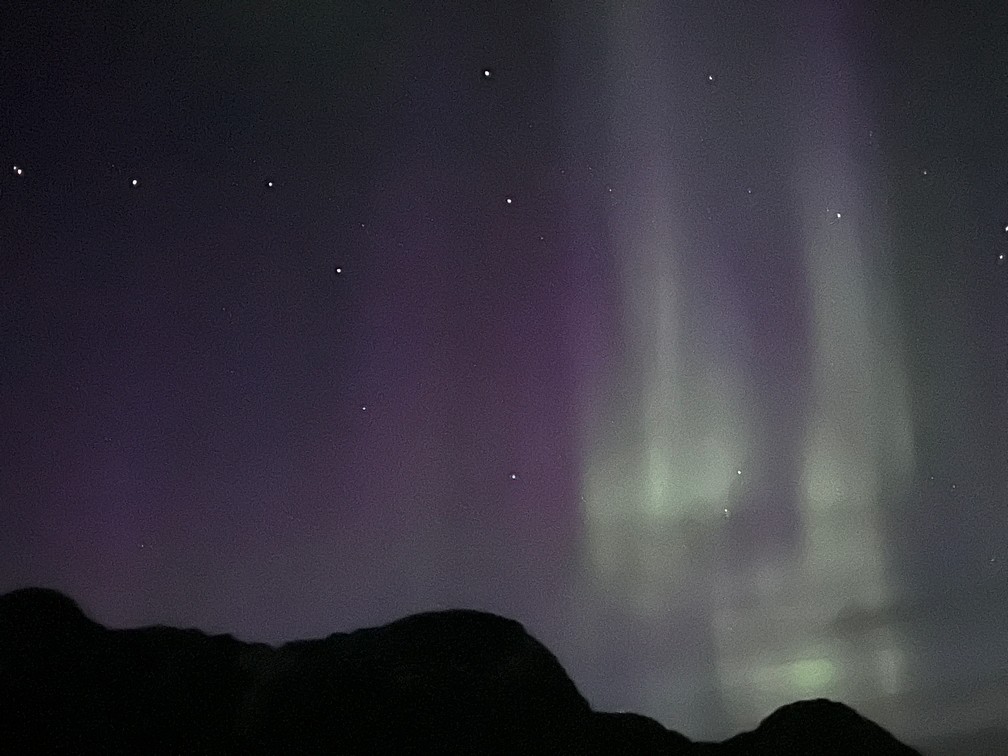 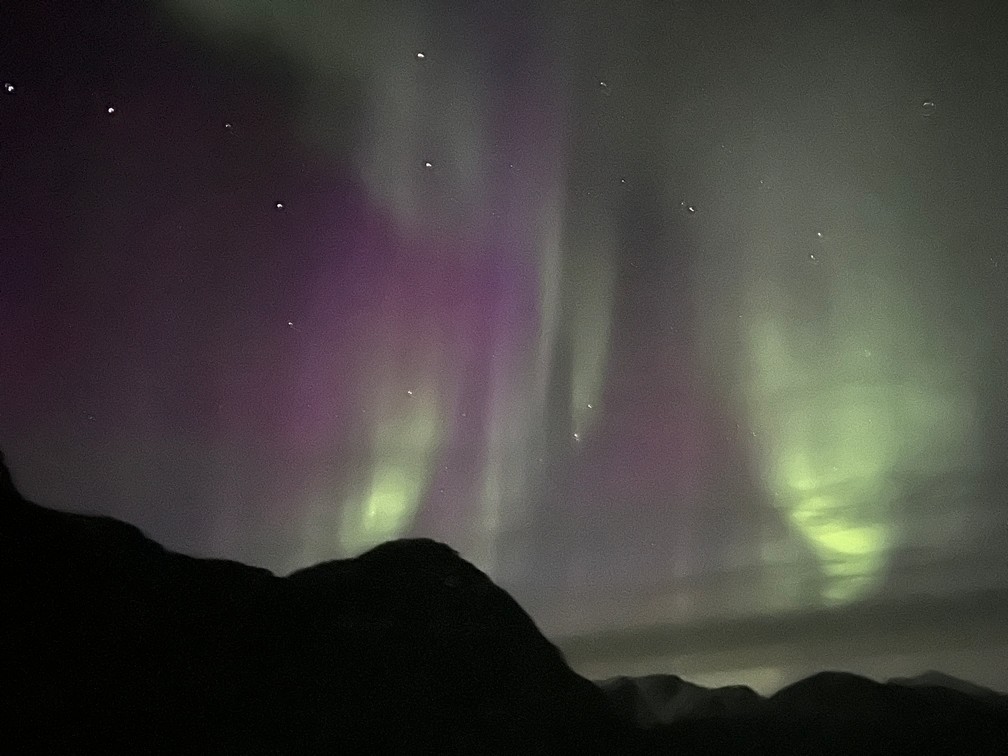