Our first full day onboard Quark Expeditions’ Ultramarine was basically an orientation day, not unlike those on an Antarctica expedition. After two days of travel, plus a very early morning Northern Lights experience, it was good to have some downtime and adjustment rather than jumping right into the expedition.

By the way, this is why I am not a fan of the flights over the Drake Passage for a quick four days in Antarctica.  It is offered by Silversea and Quark Expeditions. It probably works for those that want to tick off having been to Antarctica, but not for those who want to be immersed in “the experience”. And, not surprisingly to me, a number of my clients that had thought they only wanted to tick Antarctica off their Bucket List have returned, some more than once.  Just something to keep it in mind when making your decision. 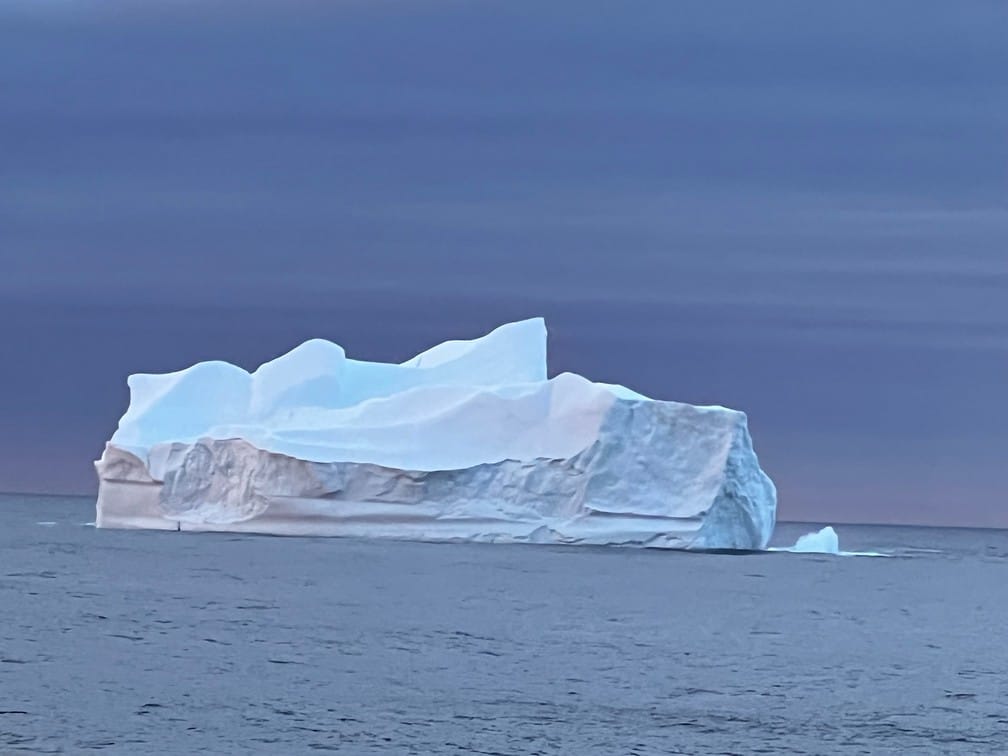 As you will see, if I did a theoretical “fly over” I would have missed centering myself, understanding the Quark Expeditions’ approach, some incredible beauty, some wildlife, and a wonderful cultural experience…all in the first 36 hours onboard Quark Expeditions’ Ultramarine.

As impressive as the Ultramarine is on first impression, the Expedition Team – 18 in all – was introduced, during our orientation talks, are even more so.   I felt confident in them even before I boarded the ship because Quark Expeditions provides you will a fairly detailed biography of each of the team members in your pre-expedition documentation.  The experience and diversity are truly remarkable, as is the number that have been sailing with Quark for years. It is truly an homage to the “expedition” in Quark’s name and reputation as a true expedition company.

Another initial experience worthy of note is the truly ever-changing itinerary proposition; with a very interesting – more detailed than I have experienced before – explanation of why based on the changing ice, wind, weather and current maps.  I am very comfortable with going wherever the ship goes, though a few guests have truly researched where they “need” to go and are a bit emotional (but not rude or overly so) about it. For me, it more instills how challenging finding and sailing the Northwest Passage not only is, but was in centuries past.  And, of course, how challenging living in this area is…and it is still the end of summer!

Our second itinerary change (third itinerary so far) – along with a hope to go even further north than the original and second itinerary suggested – was explained along with a bonus visit to the indigenous community of Qikiqtarjuaq, Nunavut, Canada was announced. I am quite pleased our flight issues have turned things around a bit, so that we have an introduction to Inuit culture right at the beginning of our expedition.

During our orientation, there was an announcement:  Pilot whales.  So, without hesitation, the entire lounge emptied onto the decks…followed by the presenter saying, “OK, we will take a five-minute break.” LOL

I did miss seeing a beaked whale and a whimbrel (a bird way out of its range) later in the day, as I was working; but some were fortunate to see this fairly rare species of whale and wayward bird.  (Remember what I said about days at sea: There is a lot of wildlife!) 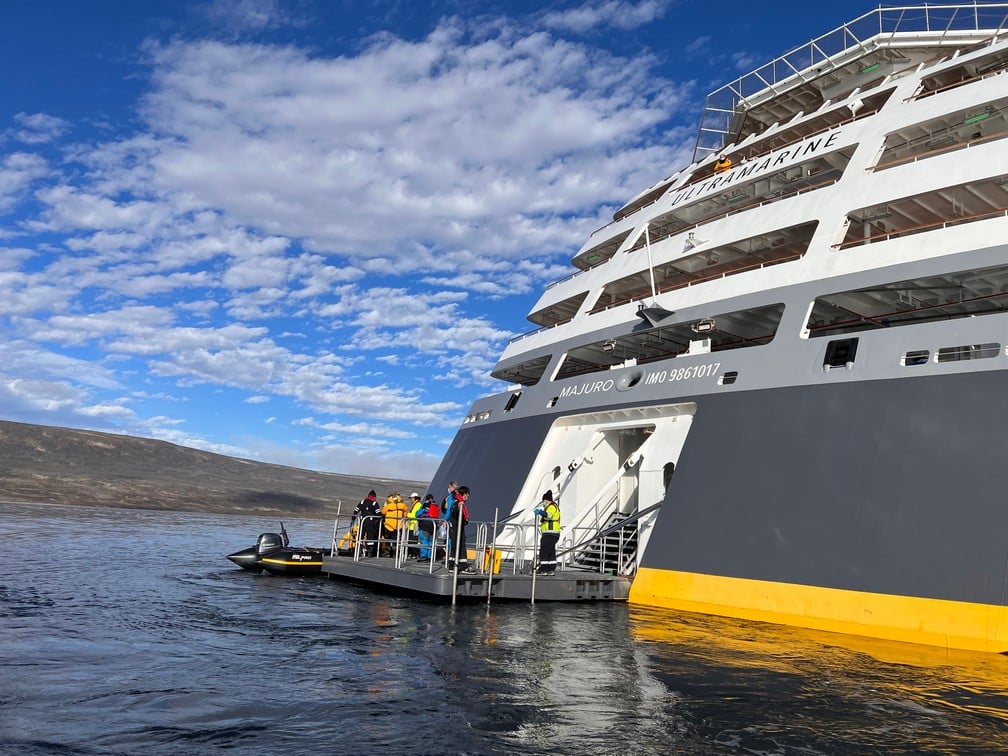 Our second morning brought us to Qikiqtarjuaq; a small island named Big Island, something that is a bit ironic since it is within sight of the truly big Baffin Island. A short zodiac ride to shore brought us to this small Inuit community, where we were split into groups.  Our local guide (a shy man who moved there as a child 53 years ago) and our Expedition Team guide who is actually an expert working with Inuit communities and engaged in the politics of protecting and assisting them led the way.

We took a leisurely wander through the town, learning about how the 600 or so residents live, work, and go to school. Culturally, the only “Southerners” (probably not a compliment”!) are the community’s two nurses and the teachers. It is something that, with the average age in Inuit communities being only 25 (due to population growth), efforts are being made to change through better education and creating opportunities.

After reaching the community’s highest point, where a large cairn (stacked rocks that identify the area as being populated) was located, and taking in the view, it was time to head to the Community Center…and why I love to travel. 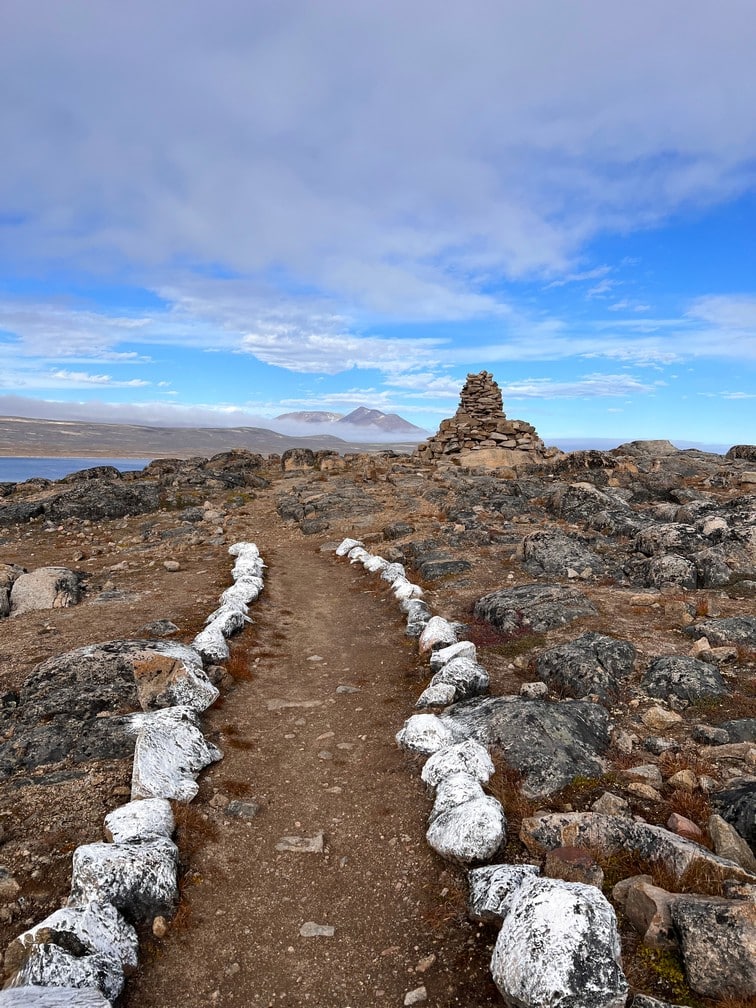 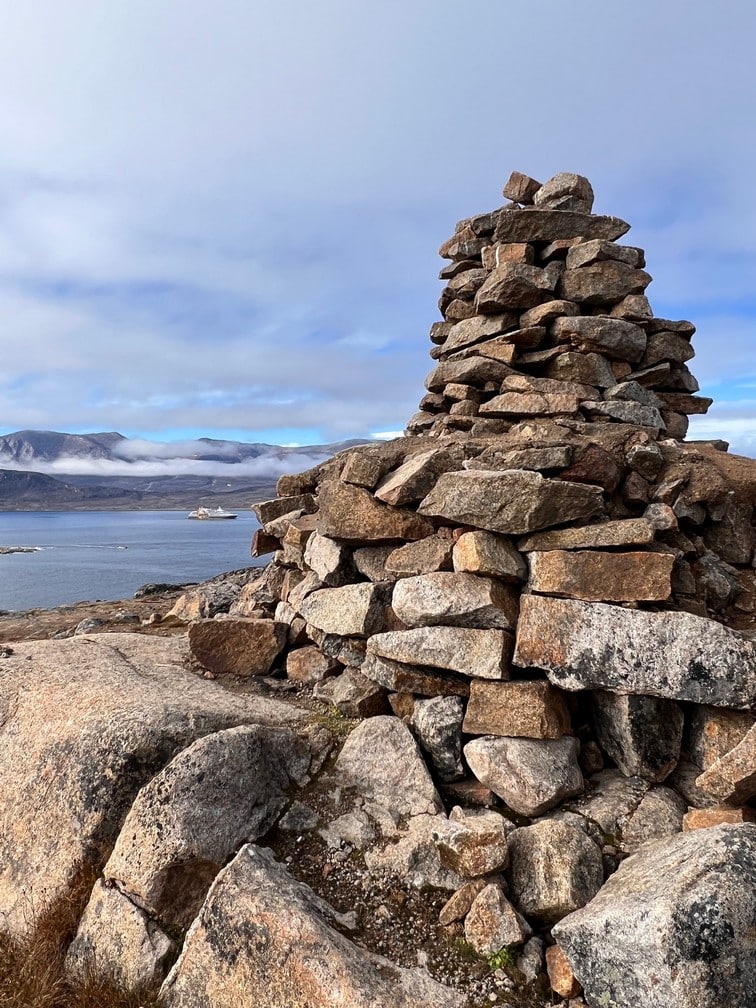 On my way there was a group of small children walking with their teacher. When I said, “Hello”, the teacher asked me if there were any Inuit onboard and, because this is an Inuit Culinary experience, I said that there were two Inuit chefs. She didn’t smile or express any emotion when I told her; she just took it in.  Interestingly stoic. 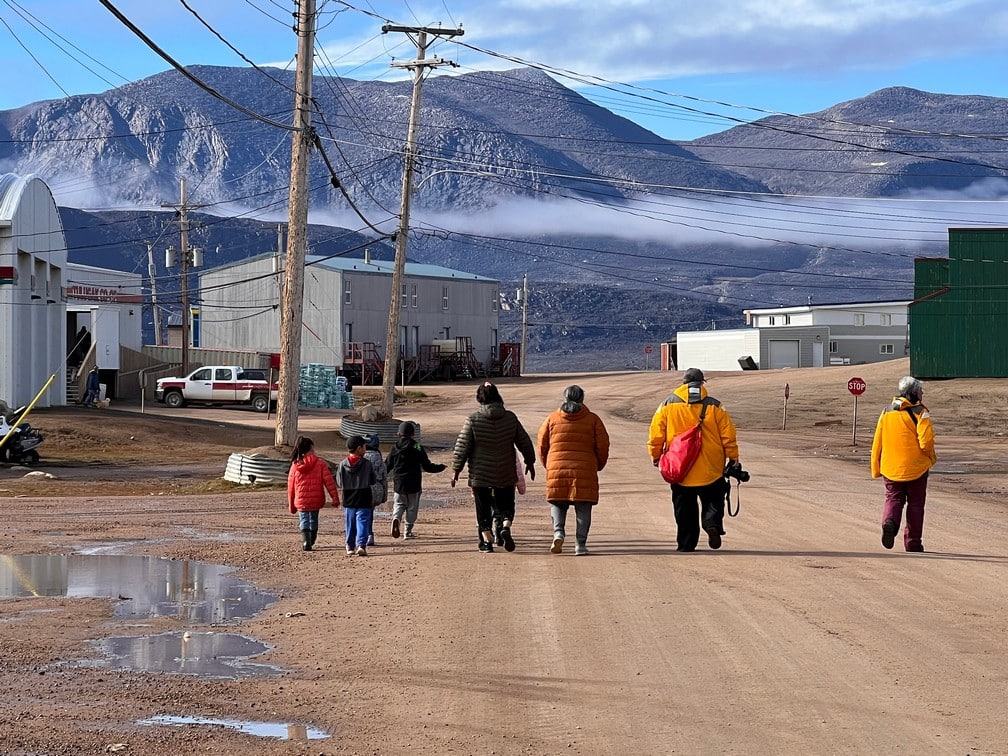 Eventually, more and more children and teachers headed out towards the shore. Alas, it was a field trip…to see our ship. Pretty exciting stuff for this isolated community!

As I was about to enter the Community Center I had a brief conversation with a local man, probably in his late 20s. He liked my glasses and it went from there. I asked him what sort of seal skins were being stretched and he said Harp Seal, but more proudly bragged that he had a few of his own.  Modern glasses to ancient-based seal skins.  A short, but friendly and informative, chat. 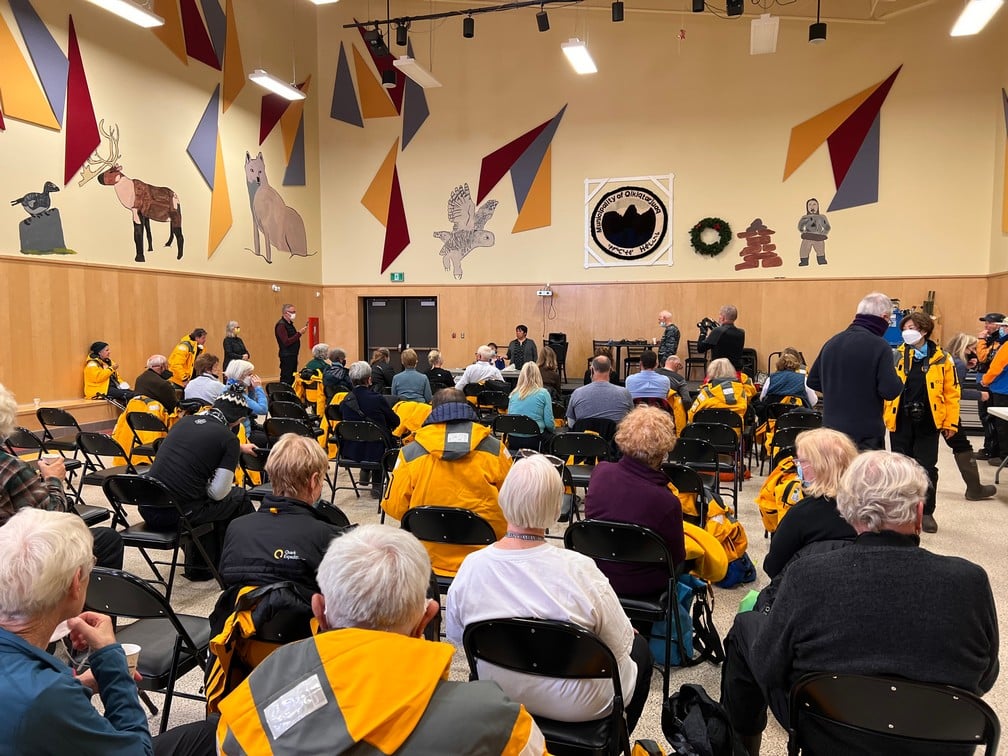 Inside, the government official for the area gave a charming and proud introduction and we were invited to enjoy some local tea and two types of local bread called bannock: fried and baked on a stovetop. The latter had a wonderful, sort of campfire/smoky flavor.  (There were also a few local craftsmen offering a few items for sale.) 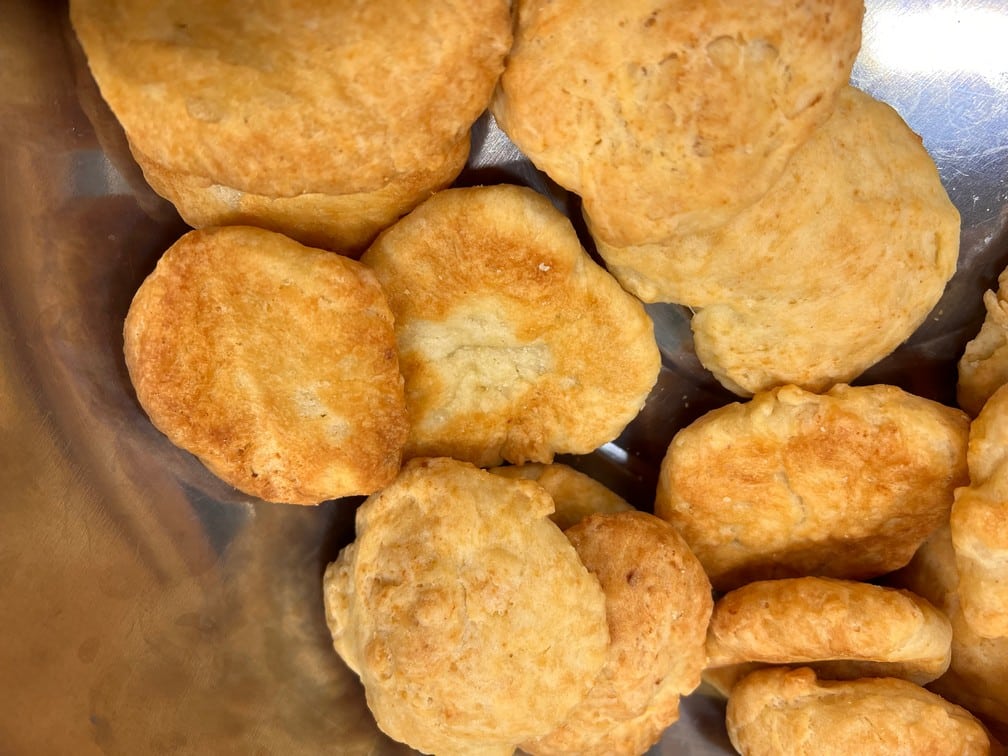 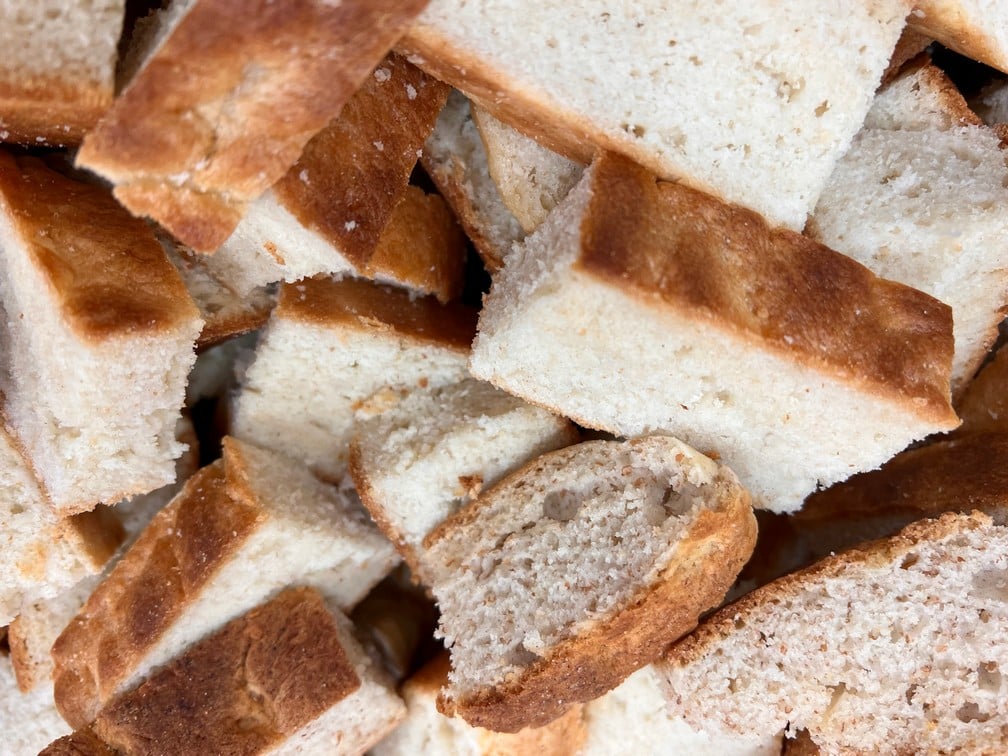 And then the “magic”…at least for me.  An elderly woman, who spoke no English, through an interpreter, explained life in this area and a bit of her perspective on things. As she was speaking it struck me how slow she and everyone else talked. There is no rush.  Why would there be?  Sometimes the simplest of things make the biggest impact.

But that wasn’t the truly memorable moment.  As this elderly woman was showing how to light a kudlik, or heating stone – the old way of heating homes (now it is either oil or propane) – I…of course it was me…asked what sort of oil was used; expecting to hear it was whale or seal. Nope. Canola oil!

I found my way back to the zodiacs for a short ride around the area. There wasn’t much to see other than remnants of an old sled dog facility and bits and pieces of past huts and equipment, for everything is saved there that can be. All else (other than tires and metal) are brought to the dump outside of town and burned. It is apparently a good place to see polar bears, but alas not this day. 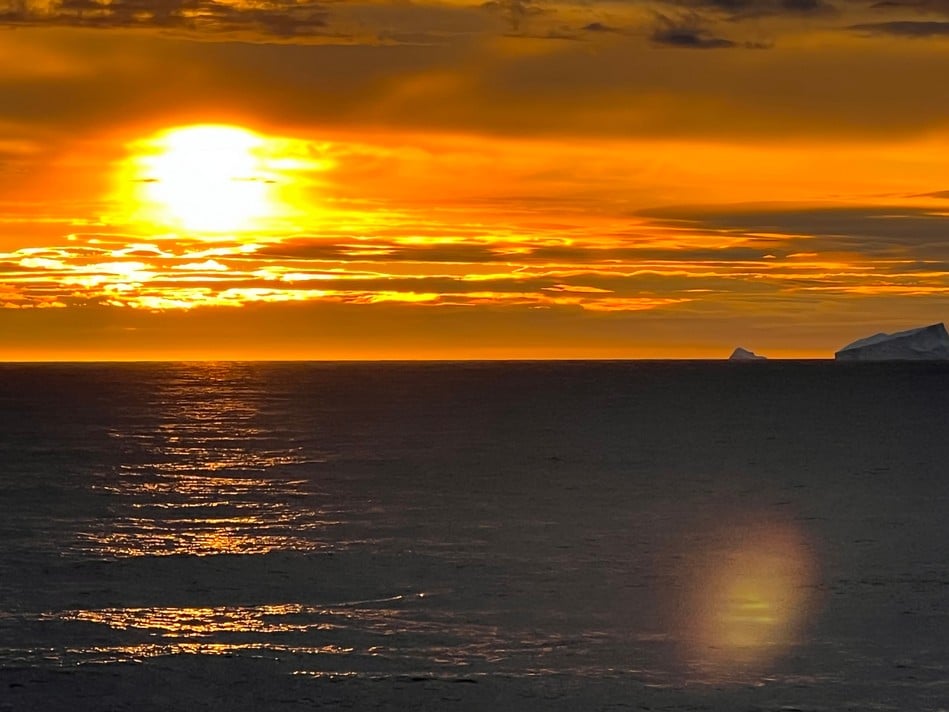 It was then back to the Ultramarine – which used its dynamic positioning to shield us from the increasing ocean swell – for a leisure lunch, a short nap…and an amazing sunset to end my second day onboard.