The third day of the Goldring Travel 2016 Culinary & Cultural Cruise on the Seabourn Quest was a scheduled sea day…and the second was unscheduled, as due to high winds and heavy seas the port of Londonderry could not be reached and even the contingency plan of tendering in Greencastle, Ireland and busing it to Londonderry was frustrated as they closed the port.  (Things go so rough, that later in the evening two of my closet drawers were literally thrown out of the cabinet and onto the floor.)  But with the Captain hiding the Seabourn Quest behind a few islands, things settled.
All most certainly was not lost.  A cocktail party in my suite featuring Seabourn’s new Mixology Cocktails as well as champagne, wine and…well, it is Seabourn…whatever else the guests wanted was had.  With wonderful passed canapes including lobster and foie gras, and I believe every officer that had more than two stripes as well as Chef Andreas and the Cruise Director in attendance, it was a lovely – if not a bit rocky – time.  And, to be sure, Captain Geir-Arne Thue-Nilsen charmed everyone, as usual. 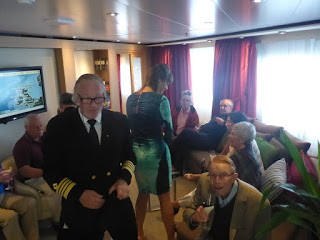 It was interesting to see which of the normally extra cost, exclusive, cocktails were ordered and how many simply enjoyed champagne and wine.  At bit of everything for everybody…It is Seabourn, of course! 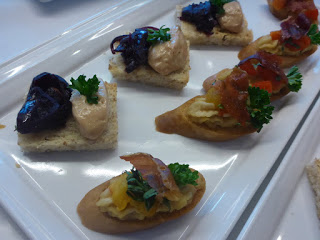 With the second, unscheduled, sea day I did something I never do:  I stayed in bed and watched movies all day.  Not such a bad idea!  And, most certainly, with my hectic schedule it was something that was – on that particular day – my luxury…delivered.  It was then time for my second dining experience at The Grill by Thomas Keller.  It was fantastic in every possible way.  And there is a lot of food…really well prepared food delivered impeccably! As I said when The TK Grill was announced:  Order the chicken!
Next up after two days at sea was Stornoway, Scotland, the main city on the Isle of Lewis in the Outer Hebrides.  It is a sleepy little town with a small fishing fleet (salmon and lobster mainly) a small Victorian era castle.  It was a lovely sunny day and a great little place to have a long walk…I walked well over four miles.  And, of course, I used the Pokémon Go app to identify places and to lead me to others.  It really is a remarkable little thing.
Having skipped breakfast, I stopped at the Tea Room for a full Scottish breakfast (a/k/a full English breakfast) midway through my walk.
My efforts to visit the fish mongers was frustrated by it being a Monday, as the fisherman generally do not head out on Sunday night (and the seas, of course, were a quite rough as well).  But then there was a bit of magic.
Early in the morning, at the recommendation of Chef Andreas, I stopped by The Stornoway Smokehouse.  It was, frustratingly, closed.  But as I was finishing up my time in Stornoway I thought I would try again…and it was open!  It has a small storefront, so I did not expect much.  I was greeted by Ranald Fraser and I asked if I could see the smokehouse.  He said I would have to speak with his father and was, after a brief consultation, invited into his office.
Alasdair Fraser, the father, seemed tough and disinterested, as he explained he had much to do as his daughter was getting married on Saturday.  I coyly asked him for just five minutes of his time, to which he replied…in typical Scottish sarcasm, “When?”.  I said now and he shook his head.  I then asked if he was happy his daughter was getting married to the guy.  Alasdair smiled and rose from his chair.
He showed me the tub where they salt the kippers and then smoker.  The more questions I asked the more enthusiastic he became, explaining the types of wood he uses to smoke dependent on the fish and how he moderates both smoke and temperature.  He explained that he smokes fish for many of the island’s businesses.
And then he said, “Let me show you something”.  And with that he pulled aside some smoking racks which revealed a brand new white door with a sign above it:  THE OLD KILN; which I thought strange.  But behind the pristine door was another old wooden one which, when he opened it, exposed an old brick kiln; the last on the island which he uses to smoke his fish…and only his fish.  The smell was fantastic, but not as memorable as the pride in Alasdair’s eyes when I turned back and looked at him. 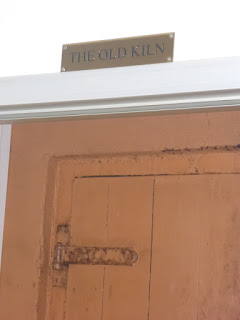 After saying my very sincerely thanks I asked if I could purchase some of “his” salmon.  The piece I purchased, Ranald explained, was near the tail, so because of the way the fish is hung in THE OLD KILN the portion near the tail would be saltier than the portion more mid-body.  (I have not yet indulged…but the famous Food & Wine Tasting on the last sea day of our cruise will happen soon enough.
After that wonderful experience it was time to start preparing for tomorrow’s first big Goldring Travel Culinary & Cultural event:  A very exclusive whiskey tasting at the Highland Park Distillery followed by a gourmet pub lunch quayside.
If you would like more information or would like to book your Seabourn cruise, please give Goldring Travel a call.
United States:       (877) 2GO-LUXURY
United Kingdom: 020 8133 3450
Australia:             (07) 3102 4685
Everywhere Else: +1 732 578 8585
Or email me at eric@goldringtravel.com.