The little things can make or break your experience or your relationship with anything.  This Seabourn Quest cruise from Rio de Janeiro, Brazil to Buenos Aires, Argentina, in many ways, is about “the little things”. 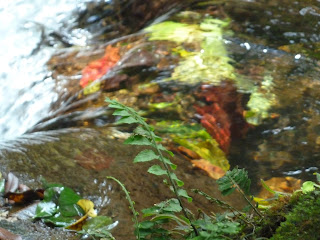 While my other posts during this cruise are more focused on events, there are some folks on this cruise that are just plain miserable and, in fact, seem focused on finding things to complain about.  They don’t care about the why or how, but merely “I paid my money and it is all about me.”  It is not about the person next to them, the staff or even the problems associated with traveling in South America; and, especially, Brazil.

And more than twice I have found myself essentially saying, “You are on the wrong cruise.  Did you discuss what these ports or what Brazil was like with your travel agent?  This is southern Brazil.  Seabourn cannot create tours, options and facilities that do not exist. (Seabourn’s tour descriptions make it very clear that there will be limited English spoken and that there is “limited tourism infrastructure”.) How is it that it is  Seabourn’s fault or, for that matter, mine…and I am not even your travel agent? You sound like you should be taking a cruise in the Med instead.”  Why the last comment?  Because that was invariably where their last cruise was.

The Brazilian ports we have visited so far (and there is another “bonus” one tomorrow…which I will get to in a moment) have been somewhat “rustic”.  Ilhalbela, Brazil was a small, underdeveloped, port with very limited tour activities.  As we travel south, Paranagua, Brazil was even less developed (probably better to say devolving – as I will explain) and Porto Belo, Brazil has great marketing, but not much to offer (especially on a cloudy, misty, windy day).

While most guests seem quite content and are enjoying their experience, there are a few vocal ones looking for an audience…or at least a guy that is wearing a Goldring Travel shirt or hat…to complain to.

In my last article I discussed our very pleasant time in Ilhabela.  To listen to these other folks it is obvious that they were somewhere else; not the same place I was.   Actual comments: “The waterfall was too small.  The beach was not as nice as another one I saw.  We only had an hour there.  Why didn’t Seabourn offer more tours?  Why did the ship stop there?” (Added to list of comments are the ones mentioned by the guests that took the rainforest “trek” which Seabourn noted involved “considerable activity”, was “vigorous” an involved “extensive walking” but found it far too challenging.)

When you travel, especially to more remote areas, you must look for the little things…because that is where the magic is.  (You know about Bar San Paolo and the beautiful rainforest flowers and water from Ilhabela, right?)

Our arrival in Paranagua, Brazil was delayed for hours.  Why?  Somebody in Brazil decided at the last minute (like upon our arrival) that the Seabourn Quest should be able to fit into dock space that was smaller than the required minimum.  (There is no auto-parking system and with tidal flows and wind, the constraints Seabourn gave is what needed to be followed; not ignored because some guy sitting in a small Brazilian town didn’t want to follow them.)  The first solution:  Tender to another pier…which just happened to be coated with sugar and the guests would have to climb a ladder.  Finally, hours later, the second solution, moving the freighter Mimosa happened and we arrived along side.

Seabourn, obviously had to cancel the tours and the operators weren’t able (or willing) to run them later.  But the transfer busses were there and I was on the first one.  Let me say that Paranagua has been in decline for, let’s say, 100+ years.  It would seem that there was nothing there.  Most of the guests sort of scratched their heads, said there was nothing and headed back to the ship after quickly looking at the “recommended” Mercado (market). 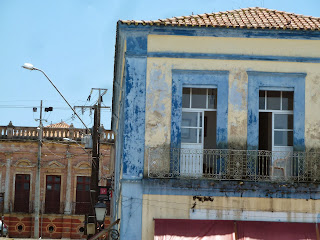 What I experienced was far different.  I saw the little things and I saw some happy people.

Getting off the bus I saw a woman and asked where there was an ATM.  While doing this I saw a woman in a samba outfit.  The woman said that there would be a samba dance at 1:00 PM.  OK, I have 45 minutes to get some cash, wander the Mercado and be back for the samba.  I walked into the Mercado and asked a man who spoke no English where an ATM was (miming the sliding of my card into a machine).  He happily left his stand and walked me to the door leading to the bus stop across the street.  Of course the ATM was broken, but as I was wandering another man offered to help (again speaking no English) and he took me to the same ATM.  Very courteous people in a ramshackle town!

Back to the Mercado that looked empty, old and of no interest.  Until you looked for the little things.  A shop selling beans and spices.  A beautiful display of bananas and coconuts.  Fruit.  Little things. 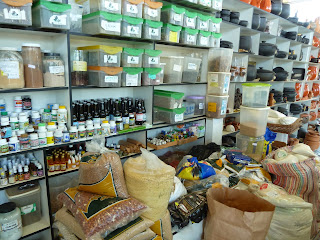 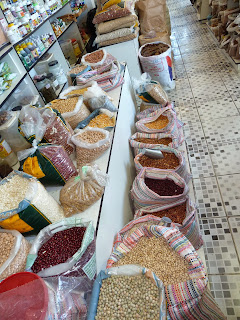 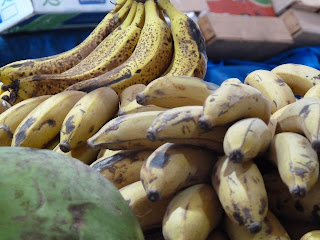 And then it was samba time.  A very elderly woman, who proudly had made herself up, and was regally dancing under small tent with a small band.  She was mesmerizing. 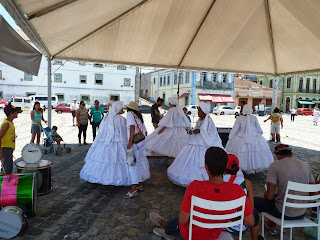 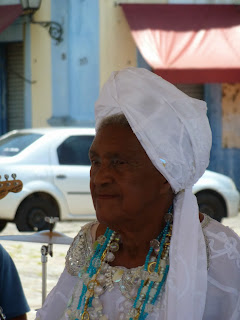 I will never forget her face or her stature.  Little things.

In and out of the various Mercado with small shops, mostly abandoned or closed.  A woman making baskets.  Little things. 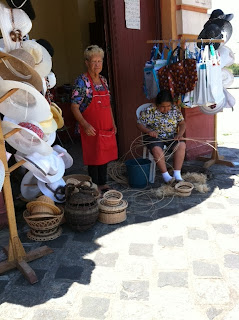 And then there was one…right on the main street (such as it was – cobblestones for the most part)…with its peachy orange façade and nothing indicating it was any different from the others. I hear some noise and walk in about five steps.  It is a food court with tables in the middle and about 10 small restaurants ringing it.  Each table has a colored tablecloth which designates the restaurant that services it.

We pick Restaurante Bom Gosto (Good Taste) because the staff is working hard, but look like nice people…and the tables are packed.  The waiter sees we are struggling with the menu and says, in a friendly tone, “English menu?  I have one.”  I order Caiparinha de Cachaca and a combination which included rice, black beans, manioc, yucca flower, shrimp, crab, breaded fish, shrimp croquettes, mussel ceviche, fish paste, French fries and, of course, fried banana…plus condiments.  (OK, I ordered a beer as well.) 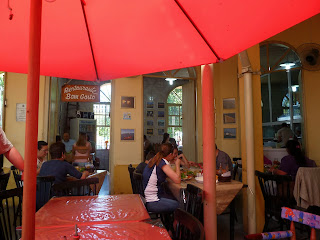 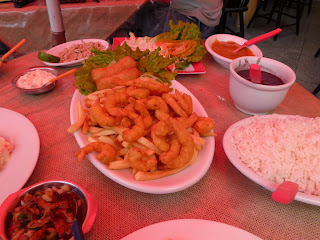 People sit down next to us.  They spoke a little English and were nice enough to explain some of the nuisance as to how to eat it.  The only other people seen were locals.  A really good local lunch with the locals was had and I was happy. 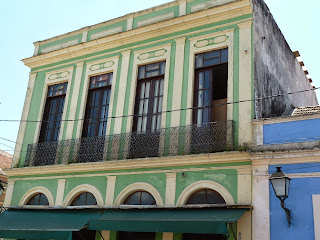 And as we walked back to the transfer bus I saw some rather interesting buildings to photograph.  Little things.

Once on the bus I heard the complaints about the port and just said I had a nice time in a town that probably was vital 125 years ago.  I won’t be back, but I can’t say I was sorry we stopped in this remote part of the Brazilian coastline.  Who knew?  Now I do!  Little things.

After we are back on the ship I hear (privately) that Brazil has decided we are probably not to go to Porto Belo, but are to go to Rio Grande…but the officials aren’t sure if it will be the next day (when were to be in Porto Belo) or the following day (which was to be our sea day).  But, alas, we can’t leave the dock until there is a cruising plan, so there we sit along side an ugly commercial dock.  Finally a decision…a surprising one:  We are going to Porto Belo.

We arrive the next morning in Porto Bela; a tiny beachside town that looks nothing like the brochures.  The tender ride in was a nightmare.  A couple complained about everything from the wait time for the tender (ours was honestly less than 5 minutes) to their water glass not being filled, to the waterfall was too small, the tour options should have been different, etc. (yes, those folks).

It is a cloudy day and honestly there ain’t much there.  I walk and find a rowboat sitting on the sand with the tide out.  It interests me and I take a photograph I really like.  Little things.

There is a small shop selling tourist handicrafts and gifts.  I pick up a souvenir of cachaca and a gift.  Little things.

We later are talking to some friends.  They found a little café and one woman went over to smell some gardenias.  The woman in the café got a pair of scissors and cut two flowers off for the women.  Little things.

Upon arriving back at the ship we decide to have a light lunch because this afternoon is the big Goldring Travel Food & Wine Tasting.  I figure this is the best time to conduct my hamburger/hot dog test.  As I order Daniel, the hotel manager, comes over to tell me that Brazil is being Brazilian (my words!) and the ship was not cleared to leave the country in Porto Belo, so we have to go to (you got it) Rio Grande anyway!  That may delay our arrival into Montevideo; thereby delaying or cancelling the Ensemble Travel Group tour and wine tasting…or not.

I see my old friend Luca, who will be taking over as Hotel Manager, in Buenos Aires.  I go over to say hello and tell him I am conducting my hamburger/hot dog test.  He teases me because I had a poached egg the other day that was not good and wanted to be sure I was happy this morning.  (I was).  He knew exactly what I was doing.  He said, you know it is the little things like being able to prepare simple dishes that expose the weaknesses.  He goes on to describe how hard it is to get a good plate of spaghetti with olive oil and garlic in Italy; explaining the sauces can cover up sloppy cooking.

Seabourn easily passed the hamburger/hot dog test. (And, yes, I check the details out every time I am onboard!) Little things. 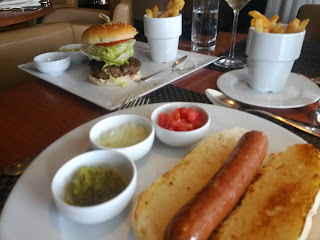 It is now about an hour or so before the Food & Wine Tasting and I stop by Restaurant 2 to see if everything is in order.  (Of course it is.)  All of the staff is smiling, excited, running about and then Chef Raphael stops them so they can meet to go over the menu to be sure all is done properly.  (I am politely invited out…because there are secrets.)  Little things.

So I guess if you are looking at the “Big Picture”, this cruise has had, so far, three small marginal ports and some logistical nightmares.

But if you look at the “Little Things”…there is Magic.