Celebrity Silhouette vs. Royal Princess - Which Is A Better Value For The Upscale Cruise Guest? Part III: Treating You Right From The Start

The ambiance on the Celebrity Silhouette is significantly different from the Royal Princess.  To me it is a simple matter of “Class versus Mass” and, as I ask some of the passengers on this cruise that have been on both lines, and there are many, not surprisingly the vast majority say that Celebrity is far superior.  (Obviously, if they felt Princess was they would now be on the Royal Princess, right?)  It is their reasons for concluding it that is of interest.

But now for my thoughts.  I will  get to other passengers thoughts later in this cruise.

We arrived at the port very early as our flight was at 6:00 AM; so early that everyone still had not disembarked the ship.  So we had to wait in line…very near the front of the line.  But when the doors opened Celebrity had everything running smooth as silk.  We were through security, processed, and SeaPass in hand in less than 15 minutes.  We then were directed to a seating area and shortly thereafter was onboard the ship.

After being greeted with a glass of “champagne” I asked were we could sign up for the Ultimate Dining Package and was directed to the Grand Cuvee (main) Restaurant.  Very efficiently we were signed up, had our reservations (at our chosen times…without compromise) for each of the next seven nights.  Having combined this with our Pre-Paid Gratuities and Premium Beverage Package, a fairly seamless experience without any “nickel and diming” was – again – to be had.

We were then off to the spa, where a massage on the first afternoon at sea was arranged with no issue (other than this is the first cruise with Canyon Ranch being the spa operator, so the question of my 14 year old daughter having a massage without a parent present in the room was raised – more on that later!).

As I seem to have hit the jackpot of CDC (Center for Disease Control) inspections, the Celebrity Silhouette was having one, so our embarkation lunch at Bistro on Five was a bit delayed.  While we had our dining package so it was included, Celebrity waived the $5.00 per person cover charge for all of the other diners.  Our lunch included a very nice cream of tomato soup (not too creamy) and an excellent Salad Nicoise.  The waiter brought over an excellent (and totally unneeded) banana, Nutella and pistachio crepe for dessert. There were some quite unique wines offered by the glass.  I enjoyed a Gruner Vetliner from Austria.  (By the way, I will be talking about the wine selections later.) 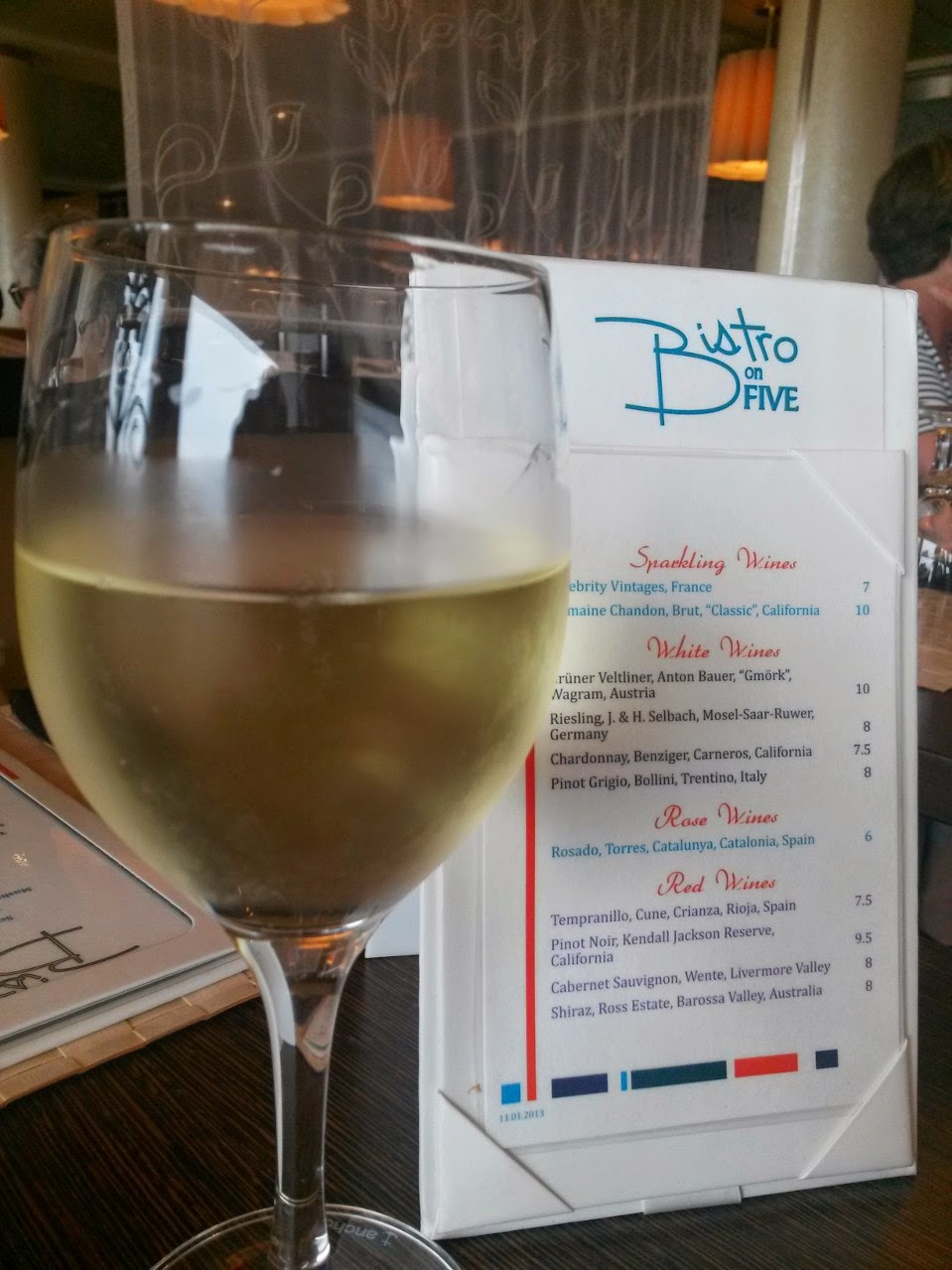 After enjoying our lunch, my daughter and I arrived at our stateroom (8279) which was very conveniently located near (but not at) the midship elevator and separated by nicely designed walls to eliminate any chance of noise.  It is a standard Celebrity Solstice-class stateroom, but with a very large balcony angled so that we have a great view both to port and aft.  As it started to rain heavily, we decided to just chill out on our balcony while we waited for our luggage to arrive.  Because the balcony was so deep we were easily able to sit out, recline the back of our chairs and wonder if this is going to be Spring Break Part Deux (as last year it rained virtually every day).


While out there pondering how I could have made it a week on the Royal Princess with a tiny balcony that would have to sit sideways on…no less that Princess was treating me, as their guest, to a view of a lifeboat…I stood up, looked to forward and saw the Royal Princess.  How did I know?  It was the giant bright red television screen overlooking the pool that was easily visible from about a half mile away.  I had forgotten that “feature” that I am sure would be a turn-off to most, if not all, upscale cruise guests.  (Movies Under the Stars is a nice feature, but television and blaring lights and sounds of all sort all day; not so much.)

After a few telephone calls, we venture out and wander the ship.  I am not going to repeat all of the various spaces, which you can discover searching my articles on the Celebrity Solstice, Celebrity Equinox and Celebrity Silhouette, but suffice it to say Celebrity has created some of the most elegant and subtilely creative spaces at sea which not only attract your eye, but breaks up the larger number of people into smaller, more manageable, groups.  (I note the Royal Princess holds about 25% more people than the 2,800 passenger Celebrity Silhouette.)

Speaking of my fellow passengers, this is definitely a more “bargain hunter’s cruise.  It is the last Caribbean cruise as the next cruise is a transatlantic crossing on the way to the European season.  You can tell the staff – while working hard and always being pleasant – are ready to get to Europe and the passengers are definitely more on the budget plan.  (The specialty restaurants are fairly quiet, the shops and casino are quiet, etc.)

We have an early 7:00 PM reservation in Murano, the French and most formal specialty restaurant.  While we are first asked our stateroom number rather than our name, that quickly changes as the staff recognizes me from prior cruises.  What was very nice was watching the waiter figure out how best to interact with my fairly shy daughter. (Can you imagine one of my offspring being shy?) They eventually have her so much at ease that she actually started ordering for herself!  The food was excellent:  Goat cheese soufflé, diver scallops with truffles in a puff pastry, Dover sole (prepared tableside) , Lobster Murano (prepared tableside), an excellent cheese course (eight different French cheeses), Grand Marnier and chocolate souffles…and a petit fours.

Our dinner was delicious.  The ambiance was beautiful.  The restaurant is quiet (save when the door is opened and you hear the singer in the lounge outside – that does bother me!).  (I did notice a decline in people on this cruise – as opposed to last year’s March cruise – dressing for dinner.  Hawaiian shirts in Murano is just inappropriate and while Celebrity should restrict it, “technically” it is a buttoned shirt with a collar, so it is more of a failing of being on a more mass market cruise than the cruise line.)

We decided to make it an early evening (having gotten up at 3:15 AM for our flight), so we headed back to the stateroom for a drink on the balcony (Glenfiddich for me, Vitamin Water for my daughter) looking at the sky and hoping for sun the next day and then a good night’s sleep.

The next morning I went to Michael’s Club to check out the Captain’s Club Elite continental breakfast.  It was just that; nothing more…and very quiet.  So I headed up to the buffet for a light breakfast.  What impressed me was one particular staff member (I wish I caught his name).  I was juggling my Microsoft Surface, my dish and a coffee cup as I went to pour my coffee.  He stopped what he was doing, ask me if he could pour my coffee, took my cup, asked me if I wanted milk, and then took my plate and escorted me outside to a great spot overlooking the ship’s wake.

Little things like that do make a difference…especially on a larger cruise ship.