My short day in Bali (the Azamara Quest was scheduled to depart at 2:00 p.m.) was, at my design, to be that of a tourist.  I know.  I know.  Eric being a “tourist” is not possible. Oh, but it was…and I am not doing it again!  (But as you will see, if you look…and take a moment now and again…there is beauty and knowledge to be found, even while being the typical tourist.)

Even though this my first time in Bali everyone I have spoken to has led me to one conclusion:  If you are not surfing, drinking, hanging on the beach (or all of the above) or staying in a luxury hotel there isn’t much worth doing in Bali.  So, as I had the day and the opportunity I planned on doing one of the most touristic things I could:  An Elephant Safari.

My guide and driver pick me up at 8:00 a.m. and takes me to the Elephant Park in Ubud, which is about 1.5 hours away and in the mountains.  Driving in Balinese rush hour traffic (chaos) was interesting, once we made it out of the city, we had some very interesting discussions about the Hindu religion (all of Indonesia is Muslim except for Bali), architecture and philosophy.  We even got into a discussion about the Chinese influences and how Cambodians have combined Buddhist and Hindu religions.


As we got out of the ramshackle towns we encountered some beautiful scenery with lush rice paddies.

And then we arrived at the Elephant Safari Park…and I am trapped in tourist hell.  What did I get myself into?  Did I do this for any reason other than to warn others NOT to do it?  It doesn’t matter because here and I and I shall dutifully fulfil my mission to complete my elephant safari.

Let’s just say my “safari” was little more than the same elephant ride you get at the Bronx Zoo in New York City, but it lasts 30 minutes, the foliage is more lush and, believe it or not, there is more car noise.  I have included two embarrassing photos.  (I figure if I voluntarily put them out there I will be protecting myself from any future blackmail attempt.) 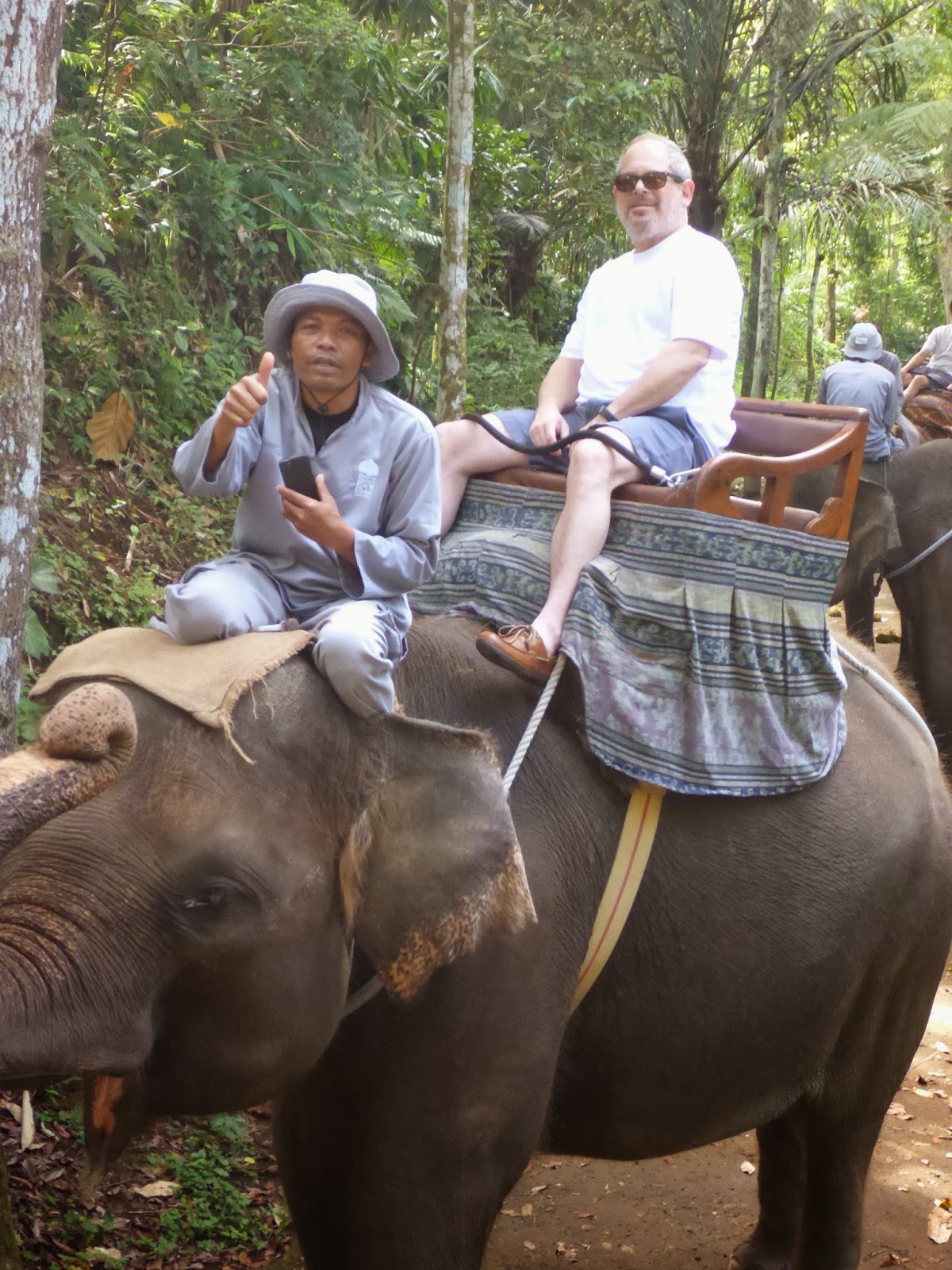 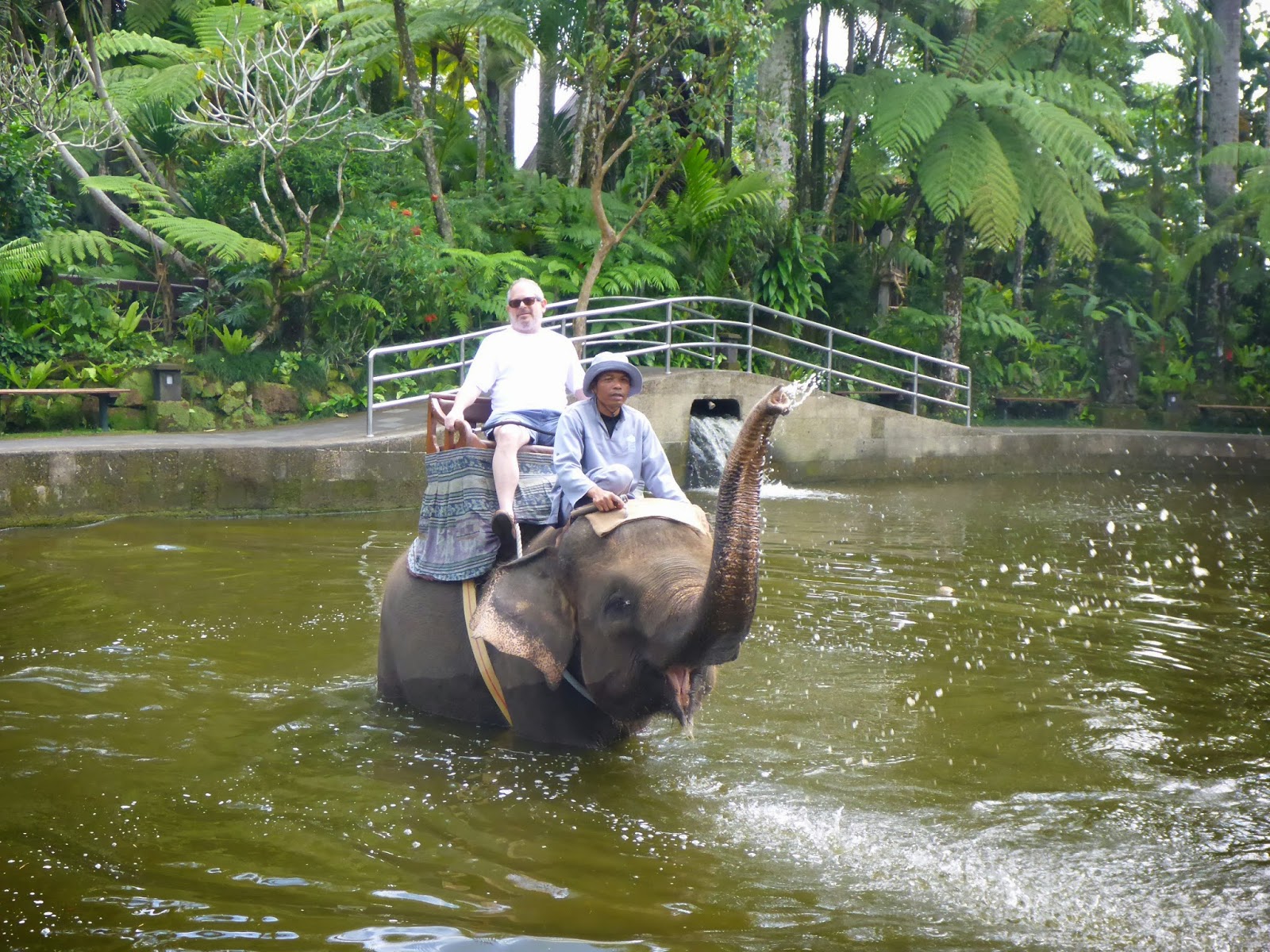 That done, we left as quickly as possible.  I said I wanted to stop at some place for local Balinese food, but it was still morning so not much was available.  I was so looking forward to trying some Balinese roasted pig, but that was not to be.

However, my guide asked me if I liked coffee.  I said yes, so we stopped at Kopi Luwak Negari.  I thought it was a coffee shop, but it actually is a very well laid out tourist stop where you can learn about and, of course, purchase the world’s most expensive coffee, Kopi Luwak.  (Jack Nicholson’s coffee in The Bucket List.)  Wandering along a path guided by a local girl I am told about the different types of coffee plants, shown specimens of each, and then various dried coffee and tea products with a couple of cages with not so happy civits nearby. (Civits are similar to mongoose in appearance.)

So what’s with the civits?  You see Kopi Luwak coffee is Balinese coffee beans harvested from the poop of civits.  Supposedly the civits only ingest the best fruits from the coffee plants, but they cannot digest the inner bean.  However, their digestive tract infuses special enzymes into the coffee bean giving it a very rich, but smooth, flavor.

I am then brought to a table to taste a variety of beverages from ginger coffee to rosella tea to, of course, various coffees.  It was, for me, a fun tasting topped off by a specially brewed cup of Kopi Luwak coffee which, honestly, was the best cups of coffee I have ever had.  (Of course I bought some, but it is very expensive, so it will be a one-off treat when I am home.)

It was then back to the Azamara Quest after a hectic morning…followed by an announcement the ship’s departure would be delayed until 4:00 p.m. due to some late arriving cargo….and all I could think about was how I just missed out on the Balinese pork. Oh well.

As we sailed out of Bali there was a sheen of oil on the water and the smell of diesel, but shortly after the pilot disembarked the seas cleared, the ship started to roll just a bit and I lied down on my very comfortable bed with door to my balcony open with the smell of the sea and the sound of the waves…and promptly fell asleep.  I had one of the best naps of my life.

Awoken at 8:30 p.m. by my steward I shook myself, got dressed and headed up to Prime C for dinner.  I am not a steakhouse kinda guy, and I was not terribly hungry, but for research purposes only I have a very good veal schnitzel and creamed spinach I a very beautiful restaurant. (More on Prime C in another article.)

I was excited for the next day:  Komodo Island, home of the Komodo Dragons; actually a very large (huge) monitor lizard.  Honestly, as beautiful as the island is, and it is beautiful, it was an expensive, crowded and disappointing “tour”.  But as they say, “It was the only game in town.”

Azamara Club Cruises organized things quite well, but between the number of people going and the fact that there was another ship, the Balmoral, also anchoring off the island, there was nothing to do but go with it.  Each group was given a guide, a park ranger (armed with a stick to protect us!) and a local person to escort our group of about 15.  I do not know how they determine which group does what, but there are short, medium and long walks and I , fortunately, was in a long walk group so we had the opportunity to see a bit more of the island than most.

But before getting to that longer portion of the walk it was more of jockeying for position as we walked along a fairly narrow path with groups leapfrogging their way down the trail after stopping to point out a tamarind tree, a lemon basil plant, etc. I made sure I was at the front of the pack and has an interesting time chatting with the park ranger, enjoying the views and spotting a couple of wild pigs and various birds and butterflies.  I turned to the ranger and asked, “Is this how you turn a 10 minute walk into a 1.5 hour tour?”  He gave a big smile and started laughing.  I had a new friend.

My ranger pointed out the scat (poop) of the local civits but said with a smile not to bother with it since coffee does not grow on Komodo Island!  He also confided in me that with all of the people (and there were hundreds and hundreds of them) there was no way we were going to see any Komodo dragons anywhere but at the Watering Hole.

And then the moment of truth.  The thing I had been waiting for.  The Watering Hole.  And there, with a number of rangers standing with their sticks at the ready…three lazy Komodo Dragons that I will, lovingly, refer to as “Stunt Dragons”. 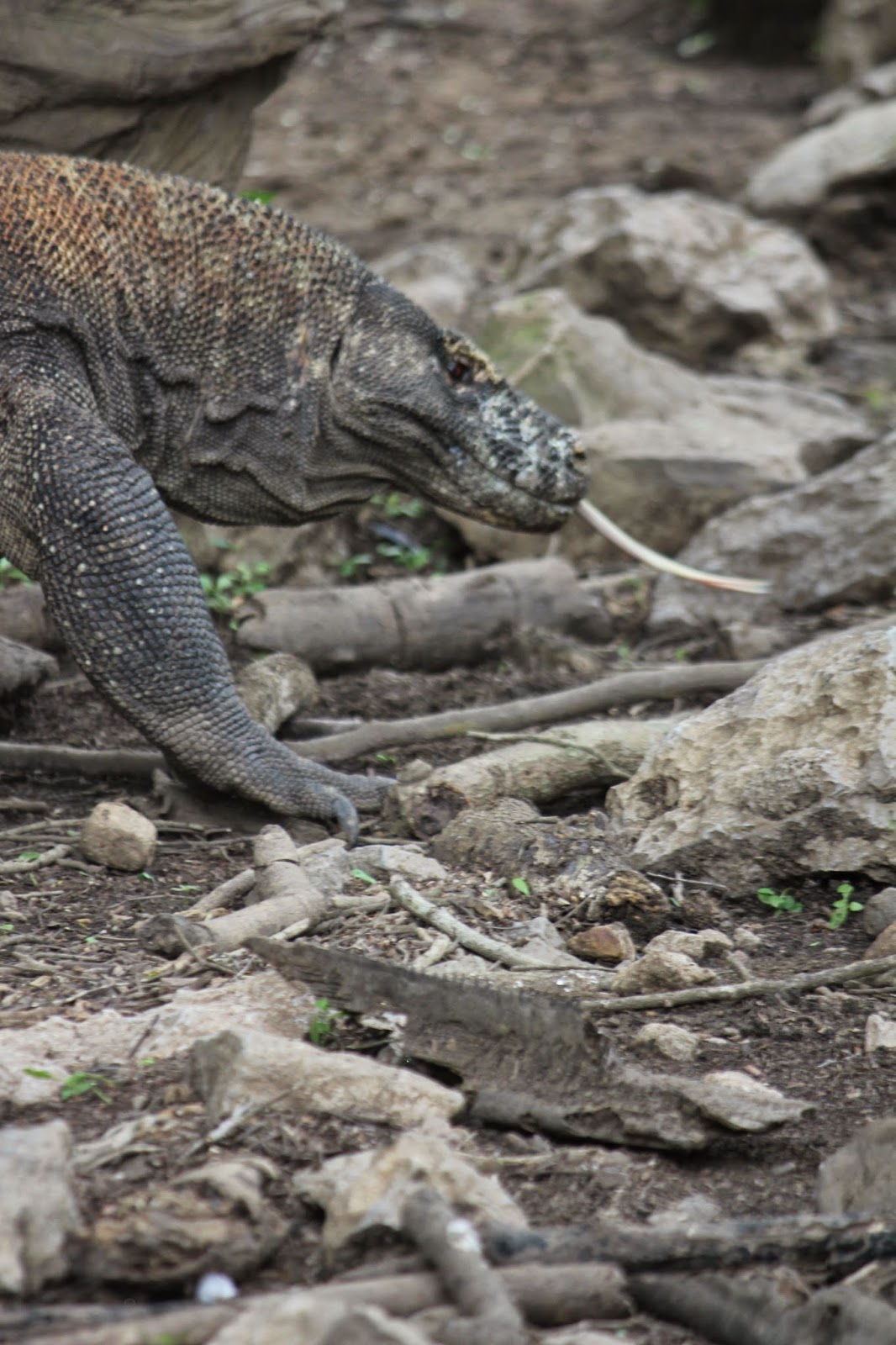 I got some really impressive photographs, but will only tell you that I was not in fear for my life and was not in need of my fervently protective armed-with-a-stick ranger.  (Don’t tell anyone!)

After stories of how someone was killed by a Komodo Dragon many years ago and how they eat their babies, etc. it was time to face the real danger of the day:  The dozens of souvenir stands you have to pass by in order to get back to the tender!

By the way, I asked and there is really nothing else you can do on Komodo Island…at least with the short amount of time we did have there.

After getting back on board the ship and a very light lunch I found my favorite spot on the Azamara Quest:  The Thallostherapy Pool, which you can get to through the Spa on Deck 9 and which overlooks the bow of the ship, but which is also protected from the wind by a large glass windshield.  This area is a great space available to all suite guests (and other passengers for a charge), creative seating from linen cabanas to swinging chairs…and bar service. It was the perfect place to enjoy the sailaway from Komodo Island.