We arrived in Sydney, Nova Scotia to a thick fog.  As the highlight here is the scenery and I had a tour scheduled to drive a portion of the Cabot Trail things were looking a bit dodgy.  The downpour of rain shortly before arrival didn’t make me feel any more confident.  But…as we arrived, the fog lifted in areas and from time to time there was a slight glimmer of sunshine.

We disembarked for an early 8:30 a.m. departure so that we could get ahead of the tour busses that would go a portion of the way we were.  Our guide was Diane, of Tartan Tours.  She was great and we not only learned a good bit, we had a ton of laughs.  Her minivan wasn’t posh, but it just didn’t matter because our time with her was so enjoyable.

We headed out of Sydney proper (which is not too difficult!) to encounter Cape Breton Road Rage:  another car on the road.  There are very few people here and even less when you get out of the town.  The views were spectacular and things like taking a small cable ferry a couple of hundred yards, cars heading the other way stopping so that you can turn in front of them, were unique. 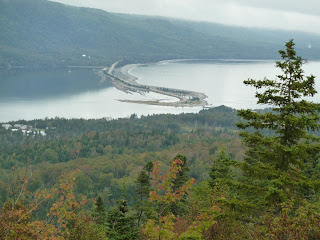 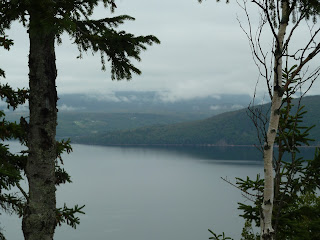 With the fog lifting a bit more and then pretty much disappearing, the contrasts and lighting was great for photography.  It was one of those times I wish I had my old black and white film camera.  That said, there were some really colorful views, but with the extremely cool summer and the amount of rain recently, we missed most of the fall colors…which should arrive there in a few days.

As we drove we stopped here and there, eventually stopping at the Keltic Lodge…where the tour busses stop, the cruise ship guests have lunch, and then return to the ship.  I wasn’t really hungry yet and wasn’t really thrilled with the menu so we headed out to Neil’s Harbour before lunch.  If you dream up a quaint fishing village with the hills rolling down to the sea, the brightly colored boats bobbing in the water and the lobster traps stacked at season’s end, you will see Neil’s Harbour.  That was our turnaround point, because we just didn’t have enough time to drive the entire Cabot Trail.  However, as we started back, we stopped at some of the most beautiful lookouts.  Spectacular. 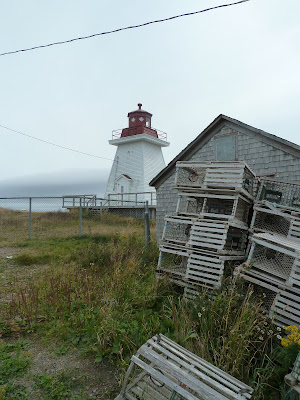 During my chats with Diane I told her I wanted to eat where the locals eat; not a touristy or posh (for Cape Breton) spot.  She said we could try the Coastal Waters Restaurant.  It is about as local as local gets with an old, dark, rather barren, interior.  “OK Goldring, you had to open your big mouth?”  “Why yes…Yes I did!”  And was I happy that I did.  As we drank our local beer and waited and waited, from the kitchen came a purported “cup” of seafood soup.  It was huge, but it tasted even better.  One of us, obviously not knowing, ordered a bowl of seafood soup.  That creamy elixir of tastiness not only could have easily served four people, 18 freshly steamed mussels ringed the bowl (tureen?).

But for me it was steamed mussels to start.  It was $6.99 for a regular portion, but they had a special:  two pounds for $9.99.  They lied.  They served me a large bucket of mussels that weighed much more than two pounds…and they were delicious.  (And, yes, I did finish them.)  However, that was only my starter!  They were followed by the absolutely best fishcakes I have every eaten.  Simple fresh fish held together with just enough potato and lightly spiced.  The portion was, again, enormous…and coupled with a giant cup of maple syrup/brown sugar baked beans. 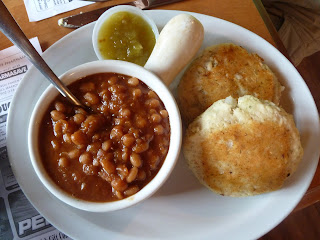 What this meal did was tell me a lot about this very rural, very secluded, coastal island and really allowed me to appreciate not only the natural beauty, but the beauty of the people as well.  Diane fit right into this mold.  The foggy, gloomy, day turned into one of my favorites with a comfortable minivan, with a great person as our guide, gorgeous scenery and great seafood. (Or you could have taken the ship’s tour in a bus driven up from Halifax.) 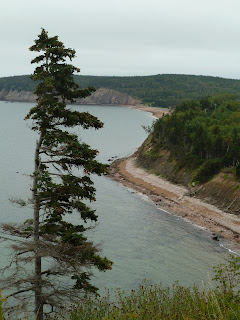 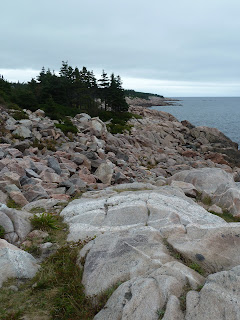 After returning to the ship, a nice soak in the hot tub was interrupted by someone else entering our space.  And then I heard some of the silliest complaints and said, “Well, if it bothers you so much, why don’t you just cruise on another line?”  The person instantly and excitedly replied, “Oh, it doesn’t bother me that much.  I would never change from Seabourn!”  Huh?  So what was the point?

Folks, when you travel nothing is perfect.  I am certain I could have sulked because the sun wasn’t shining.  I could have turned my nose up at that minivan. I could have complained that a few mussel shells were broken in that bucket.  But if I had, I would have missed that fantastic lighting, one of the funniest and good hearted guides I have ever had and a meal that was the essence of what simple cooking that allows the ingredients to be the star is about.  And, of course, I was then back on a Seabourn cruise sipping champagne in a hot tub as we set out to sea.

The day wasn’t perfect, but my day was.