I was anxious to see what my first full day on SeaDream
Yacht Club would be like.  I was “up and
out” early, so I sat by the Top of the Yacht Bar with a table admiring a
fantastic view.  (We had been told that
the sail into Bonafacio, Corsica is beautiful so to be on deck by 8:45 a.m. to
see it.  Not a problem, as I had my spot
by 7:30 a.m.)
My focus, however, was less on the island, but the
yacht.  What I observed was a ballet with
the staff working as a team (I was later corrected that they are a “family”)
providing different styles of service to each guest as they perceived the
guests wanted to be treated.  It was
interesting seeing how the felt out each guest as they arrived for
breakfast (especially so as to myself,
as they all knew that I was coming and were concerned about making a positive
impression.)
Once I told some of the
staff to call me “Eric”; not “Mr. Goldring” I started to have a hand put on my
shoulder when asked “May I get you another vodka and tonic?”  It is amazing how much a light touch can draw
you in.
On the other hand, if someone does not like physical contact
it can be highly offensive, so how does the staff figure it out?  As one of the staff later said to me, “You can’t
teach five star service.  It has to be
intuitive.”  I loved that for two
reasons:  (1) It means SeaDream makes
sure its staff is “intuitive”; and (2) SeaDream isn’t trying to hype its
product to be more or different than what it really is.  It puts you at ease quickly…regardless of
your preferences. 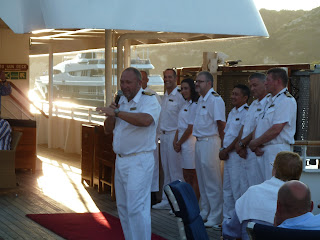 So, before I get into the details, the short version
is:  My first full day has given me the
impression that the staff on SeaDream Yacht Club “get it”.  They smile. They tailor their approach based
upon each guest’s desires.  They work as
a team.  They are focused on the
details.  They are very proud of what
they do.  And along those lines, I don’t
think I ever heard the staff using the word “I”, but “we”.  I could be wrong, but the message is very
clear:  SeaDream Yacht Club’s management
lets the staff nurture not only the guests, but each other.
Now, back to my day!
As I was sitting watching the world go by it struck me that “al fresco”
is an enormous aspect of SeaDream.  The
“yacht” is set up to easily handle all of the 114 guests (yes, the ship is as
full as it gets!) for al fresco dining with comfortable all-weather wicker chairs
and varnished wood tables (with white linen dependent on the meal) spread among
four interconnected areas; which keeps things intimate and more private. 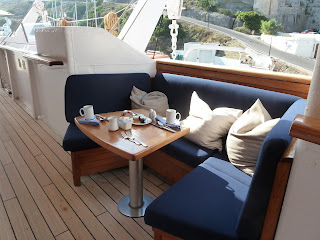 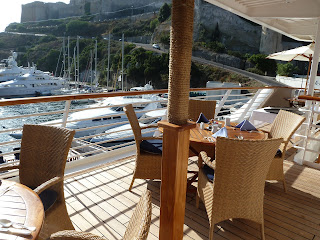 Breakfast official starts at 8:00 a.m. (Early Riser coffee
and Danish is available from 7:00 a.m.)
I order two nicely cooked poached eggs and sausage with a bagel and
smoked salmon.  The nautical themed
coffee mugs are a nice touch.
I see a truly beautiful Bonafacio come into sight and then we
docked at the entrance to a very busy yacht harbor with yachts and superyachts
lining the quay.  But my yachting
experience will have to wait because I have decided to be a “tourist” and take
a SeaDream excursion consisting of a boat trip around the island and then a
walk around to upper town (a tram ride away).
I was surprised at the limited number of guests taking the tour…and the
other tour was cancelled for lack of interest…but the folks that did go were
very nice and enthusiastic.
We are met by an energetic woman I can only describe as a
Corsican Julia Child.  She was, thus,
quite entertaining.  The tour was
entitled “train and boat”; we got the boat, but there was not train.  There was a short tourist tram pulled by a
faux engine/tractor up the very steep hill to the top of the old town.  The tour was worth taking, though honestly,
if I was a bit more responsible I could have read up on what she had to offer
in a few minutes.
But the boat ride
showing off the spectacular coastline and her guiding us through the narrow
streets was appreciate; especially
because she told us to have a peak in a shop called Roba Nostra.  To her surprise she mentioned that there is a
typical Corsican chestnut beer, Pietra, and our group just ordered a
round.  (It wasn’t bad; much lighter in
body than I thought it would be.) 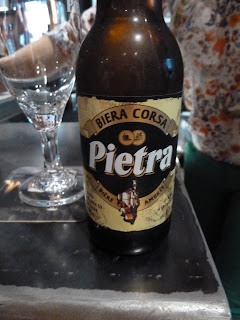 As the tour of the old town was finishing up she said we
would walk down the hill to the marina (where I planned on wandering
later).  So, not wanting to climb that
steep hill on foot, I asked if the tour was pretty much over; resulting in a
number of us ending it early and staying in the old town.  By the look on the faces of the folks walking
up the hill it was a very good idea!
One couple and I started chatting and took off on a
wander.  Having seen pretty much only
touristic restaurants, and really liking the looks of Roba Nostra, we walked in
– dozens of jamon and salami hanging from the ceiling: 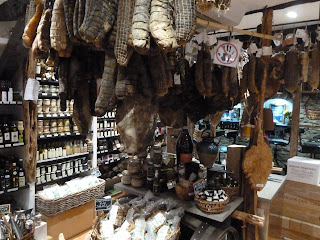 The woman
recognizes me, looks me straight in the eye and says, “Charcuterie!” and walks
to the rear of the store where there are a mere four tables.  So I followed.  The menu had three items on it in
French:  Charcuterie, Fromage and
Combination.  We were told that they serve Black Pig, which is particular only to Corsica.
You know we went for the
combination…along with a wonderful Corsican rose, Clos Canarelli.  I am not sure how long lunch lasted, but
every moment was enjoyable from the food to the wine to the company. 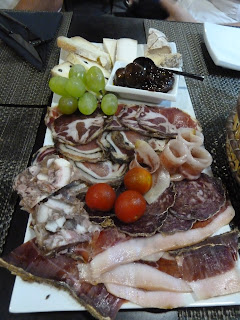 As we started our decent down the hill we saw a man, who could
have been either of us guys, sweating and looking like if he had to take
another step up the hill he would pass out.
He gave us the look like, “Why the hell did I do that?”  And we saw that look from others, both men
and women, as we sailed down the hill.
After a short stroll through the yacht basis (filled with touristic and
overpriced shops and restaurants) we knew we did it right.
I also thought that those who thought just getting off the
ship for a quick wander would say Bonafacio is not worth a visit…but they
missed what the place is really all about.
(It is not a port I would work a cruise around, but I wouldn’t discourage
visiting it again.)
Back on SeaDream II I headed to the hot tub which is located
on the aft deck, under cover, next to the pool bar and with a great view
aft.  It was quite enjoyable, but more of
a warm tub than a hot tub.  A waiter came
around offering everyone a mango/mint drink that was very refreshing.  Nice touch!

After a bit of work and some relaxation it was time for
Dinner with the Captain.  On SeaDream the
dinner is not a formal affair.  In fact,
I don’t think that is even possible.  We
dined al fresco at the Top of the Yacht Restaurant. 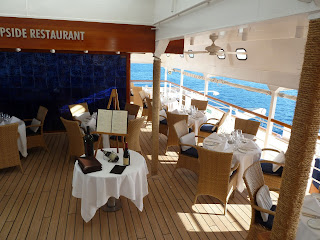 Captain Terje Willassen is charming, lively, always
smiling man who was a wonderful host and makes his love for SeaDream Yacht Club
more than evident.
But the highlight of my dinner was the woman sitting to my
right.  She is Kuwaiti’s first female parliamentarian
and a dynamo.  Obviously I do not agree
with everything she said or her perceptions on various topics, but the key to
understanding the world is to respect and understand from where those positions
are coming from.  I, possibly not so
subtly, peppered the conversation and, to be sure, we both really enjoyed
it…as, it seems, did the entire table.
Captain Terje even commented that it was nice that he didn’t have to
worry about carrying the conversation.   (For those who assert cruising/yachting is
not “travel” – and you know who you are – I love travel!)
After dinner I retired to the Top of the Yacht Bar for a
couple of whiskeys and some fun conversation.
And the bar stays open as long as there are guests present; and this
night it was well past 2:00 a.m…and all I saw from the staff were smiles and
heard, “May I get you another…?”