The Seabourn Quest’s arrival into Kirkwall, Scotland, the largest town in Orkney; an archipelago of islands in the far north., marked one of the highlights of the 2016 Goldring Travel Culinary & Cultural (Food & Wine) Cruise:  An exclusive tour and tasting at Highland Park Distillery followed by a gourmet pub lunch. 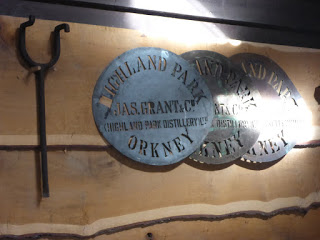 The day started out with torrential rains that, but for the annual Goldring Travel jackets, would have left everyone soaked as we made our way from the ship to our private Highland Park bus waiting to pick us up.  After our wet Scottish welcome the weather fortunately cleared…not exactly into a sunny day, but most certainly sufficiently dry!

Our tour started with the typical introductory movie…and that was all that was typical.  Our tour of the Highland Park Distillery, which is both ancient and beautiful, was in depth and very interesting; led by James…who you could instantly tell has done this for years and loves his job.

But the real enjoyment came after the tour where we had a truly exceptional tasting of eight (8) whiskeys starting with an unaged whiskey (also known as “white lightning” or moonshine), and following then Highland Park’s 12, 15, 18 (declared “the best spirit in the world”), 25, 30, 46 year old and then a 60+ year old whiskey (pretty much priceless at an estimated 9,000 GBP per bottle).
While the first seven were enjoyed in Highland Park’s private tasting room, the 60+ year old whiskey (which I describe as subtle and smooth as your most comfortable pair of slippers) was properly presented and relished in the Eunsun Room.
After our Highland Park experience, it was time to head off to the quay in Kirkwall for a gourmet pub lunch at Helgi’s; a true Scottish pub renowned for its exceptional Scottish fare.
Goldring Travel’s guests enjoyed such delicacies as a platter of smoked mussels, scallops and salmon, cauliflower and smoked cheddar soup, Bubble and Squeak with Scallops and fish & chips (though some did order hamburgers!), combined with local beers, stout and other beverages.

And I could not resist the Sticky Toffee Pudding.  (I ordered it with cream, but the waitress, with a sparkle in her eye said, “You want it with ice cream”.  I said, “I do?” and she replied, “You do!”  She was, of course, right.)

After lunch a stroll around Kirkwall completed our day…and a great day it was.

The next day brought us to the lovely little town of Ullapool, Scotland; a hidden gem introducing us to the Scottish Highlands.  With a soft rain being omnipresent, one would think the place dreary and dank.  It was, quite to my surprise, anything but!

I disembarked the tender and went into the local information tent.  There I was met by an utterly charming, if not incredibly cheeky, woman with a little grey woolen cap, bright eyes and a huge smile.  I asked her if there were any hiking trails…and this Irish transplant let me know it was going to be an interesting day.  (And, of course, her cohorts did nothing but encourage her banter.)

She handed me a map for the Ullapool Hill Path telling me there is a very nice loop trail.  It, very clearly, showed a “Start Here”, but noooo, that was not where I was to start; Edel insisting that I was to start behind the town’s gas station though the map showed no entry point and no trail there.  This led me to believe (sort of) I was being set up as an innocent tourist being taken advantage of.  (Next thing I thought was that she would be telling me where I could find the nests of some wild Haggis.) And the laughs just kept coming.  Our “discussion” was interrupted by a very rude man from the ship who insisted she call him a taxi; though in this tiny town the taxi wasn’t going to be available until mid-afternoon.  His selfish urgency could have ruined the moment, but Edel told him to wait until she was finished with me…and she wasn’t finished!  (I ran into him the next day as well…and he has “rude” well practiced.  Oh well, his loss!)

I was also told of a walk down by the river which, if I put everything together, would eventually lead to the “Start Here” rather than the gas station…and so I went off.

But before I describe my hike, I want to pause and mention that many times I hear an urgency of “What tour should I take?”; especially in small or otherwise unfamiliar ports.  I believe that in most cases those tiny and unfamiliar ports are hidden gems and the places that we, as travelers, are supposed to embrace.  Ullapool and its people oh so perfectly prove that point!

I headed off with one couple from my group (now friends who have done many cruises, including Seabourn World Cruises) and found the river and an amazingly beautiful path with wild strawberries, raspberries and cherries as delicious snacks – of course picked at a height above that of a dog…for obvious reasons) as the wildflowers and omnipresent natural beauty amazed us; the soft rain and light making everything look that much prettier and the colors more intense. 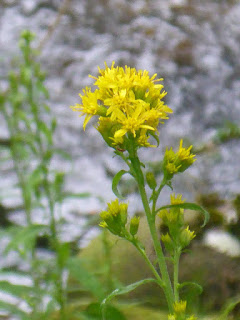 At the end of the river path we headed back towards town and saw the infamous sign for the actual start of the Ullapool Hill Path.  Saying goodbye to my friends it was a really wonderful hike up the “hill” (known as a mountain, except, I guess, in the Scottish Highlands) with yet more beautiful wildflowers, thick patches of heather and as I got higher, fantastic views.

But just to make sure I wasn’t too full of myself having climbed this “hill” just as I was about 90% of the way, one of the Seabourn waiters, Dawid, comes bounding up behind me hardly breathing.  He was kind, however, and walked the last bit with me at a pace probably a bit slow for him. 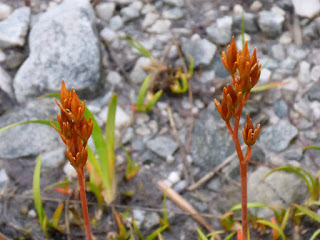 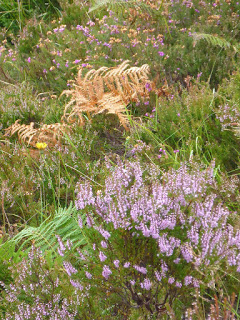 As we headed back down, I asked him which way he came.  He said from the left (my having come from the right) and eventually – returning his way – I wound up behind – yes, you guessed it – the gas station.  But we did discover that the only “loop” trail would have involved another three hours or more of hiking and put us miles from where we wanted to be.
Dawid needed to get back to the ship and I needed to stroll through town and find a local, greasy, chippy.  And I did, ordering up fried haggis and fried black pudding with an Irn-Bru (a disgusting, but very popular, orange colored Scottish soft drink that my children love).

So with my Scottish delicacies I headed back to the Seabourn Quest tender…or so I thought.  There was Edel ready to once again pounce on this gentle soul.  “What are you doing with an Irn-Bru?! And what’s that you are eating?”  Round 2 of banter began, but ended when she said, “If it wasn’t raining so much I would take you for a ride and show you the area.”  I said “Let’s do it anyway.”  And we did…right after she threw out my haggis and black pudding!  So for about an hour we drove along the water’s edge and viewing this absolutely beautiful area and with wonderful local flare. 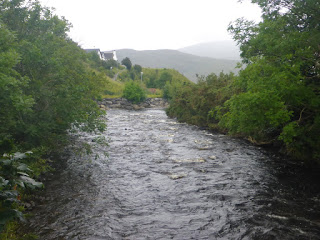 My time in Ullapool had come to an end, so with a fond farewell, I returned to the Seabourn Quest after an absolutely fantastic day.  After arriving I heard a number of complaints that due to the rain and clouds the tours to see the Scottish Highlands were disappointing.  Now I don’t expect most Seabourn guests to hike a mountain, or hop in a car with a total stranger, but chatting with the locals can be far more rewarding and a far more personal experience than listening to a tour guide on a bus.  At least it is for me!