Today the Silversea Silver Discoverer was to arrive in Singapore after her dry-docking and sail off, with me aboard, of course, to Indonesia.  Well…Ship Happens!  Not happening. At least not today.
After my morning adventure (discussed below) I returned to my Noel Coward Personality Suite at Raffles Hotel here in Singapore to gather my things and head off to the ship where she was supposed to be docked at the Marina Bay Cruise Center.  Instead I gathered two letters: One from the hotel and one from Silversea Expeditions.  (Yes, you should complete all the pre- and post- cruise information when completing your guest registration.  And this is why!)
The letter from Silversea explained that a “technical problem with our engines” occurred as the ship was existing the dry dock and that I should stay in my hotel for an additional night and that Silversea would pay for the hotel and my meals.  After a bit of confusion with the port agent telling me I should move to another hotel, the Raffles front desk advised that Silversea had been in touch directly and confirmed it would reimburse me for my extra hotel night.  (Yes, Raffles hotel staff is excellent!)
I am baffled by at least a couple of comments I have heard of angry with Silversea and also expecting the cruise to be of the same length (as if the next guests should have their cruise shortened).  This is an expedition cruise which, as I will discuss more in later articles, requires flexibility and an appreciation that not everything goes according to plan. You don’t know if the [fill in what animal you are so looking forward to] will appear or if wind or seas will keep you from exploring that island.  It is part of what an “expedition” is!
So, with that, I do not yet know what the “technical problem’ is, but what I do know is that I could focus on the disappointment or I could explore more of Singapore.  I went with the latter! (I am, of course, hoping the problem will be corrected for a departure only a day late.)
This morning I decided to head out and explore two more ethnic communities in Singapore.  The first I walked to was Kampong Glam, the Malay or Arabic neighborhood.  It was interesting to walk through, but there wasn’t much excitement.  That may have been because it was earlier in the morning, but it is worth a wander if you have the time.

The second community, which was truly vibrant, is Little India.  The sights and sounds were fantastic.  Also, the architecture became more ornate and fun to admire. 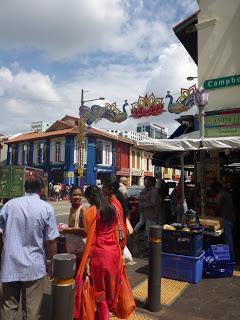 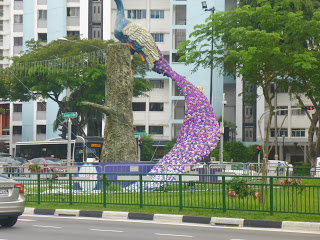 It was also about this time that I figured I should have some India cuisine.  As I walked I enjoyed a puff pastry filled with curried lamb, potatoes and vegetables.  But that was just a snack. 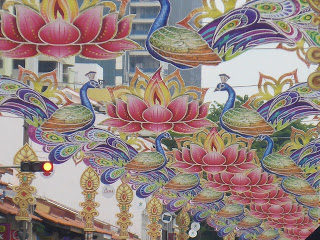 With literally dozens of eateries crowding the sidewalks, which one to choose?  Obviously the one with a number of locals eating and chatting with smiles on their faces and plates of delicious looking food in front of them.  So I walked into this tiny restaurant called Mubarak and I simply asked the kind man behind the counter to give me what he felt was their best dish.
I pulled up a plastic chair at a table on the sidewalk and he went to work, but not before giving me a delicious ice tea with lemon with flavors like I have never experienced.  (It was actually hot tea to which ice was added, so it was quite fragrant when served.)  A few minutes later curried chicken with rice, okra, roti and poppadom.
As I mentioned, when I returned found out about my delayed departure.  So to be sure things were organized properly I went to the Raffles Hotel front desk and spoke with Jovie; an absolutely charming and intelligent young woman.  I asked her for some non-touristic things to do and that lead to a wonderful discussion about the US election, how it could happen, what it meant to me and internationally, etc.  Exceptional!
As we chatted she mentioned that there is another culture that is unique to Singapore:  Peranakan.  They are Chinese that settled in Southeast Asia long ago, also called the Straits Chinese, and are culturally distinct from the “new” Chinese immigrants.  And then she asked me if I like different foods, especially really spicy foods.  Ya think?  So a reservation was made at True Blue, apparently “the” Peranakan restaurant located in the heart of the Peranakan Katong District.
But with much of the day still ahead, I went for yet another walk, passing a synagogue, Singapore Art Museum, dozens of luxury shops and some unique architecture; picking out some of the older experiments and seeing how their concepts found their way into some of the more modern behemoths that seemingly are everywhere in Singapore, and people…lots and lots of people.  But the air became thick with humidity and the skies darkened, so I headed back to Raffles Hotel for a rest before the skies opened…but I wasn’t the only one thinking that.  Getting a taxi was a bit of a challenge, but I did get one!   And boy was I glad, as the skies opened with a few huge cracks of thunder!

The skies cleared just in time for my short walk to True Blue.  The restaurant entrance is beautiful and inviting.  As I went to open the door a charming hostess assisted me and, after confirming my reservation, sat me in the middle of the restaurant (rather than, as normally happens when you dine alone, in some corner).  Very welcoming. 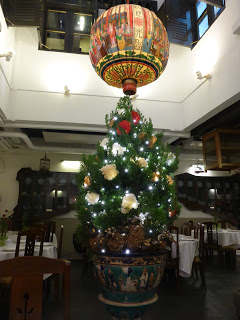 The waitstaff is quite attentive, but my waiter was both very helpful in navigating the menu and in pushing certain dishes.  He did mention, not too subtly, that certain dishes were enjoyed by Anthony Bourdain, Andrew Zimmern, René Redzepi (the chef/owner of Noma), etc. who have dined here. After completing my education and our friendly negotiations, it was time to eat!The first dish was the star of the evening.  It is called Ayam Buah Keluak (Chicken with Black Nut). It is a very rich, earthy and spicy dish that focuses on the black nut; actually the nut of the Kepayang Tree.

These large nuts are cleaned, soaked in water and then buried in ash, banana leaves and earth for 40 days to ferment the nut meat and render it non-toxic.  It is then scooped out, mixed with a variety of earthy and hot spices and returned to the nut shell.  Then it is cooked with the chicken in a spicy broth. You eat this by mixing some of the Buah Keluak with rice and broth and eat with the chicken.

I have never tasted anything like it.  Earthy, spicy, hot and, somehow, comforting.  I did not notice, until after a few mouthfuls, that the top of my head was in “full spicy sweat mode”.Next up was Crayfish in Spicy Paste.  It looked great and was cooked perfectly, but honestly I should have had that first as the flavors of my first course just overpowered it.

My third dish (and starting to get full) was Kari Ikan (Fish in Vegetable Curry) that was outstanding and a great, but different, kind of spicy.  It was just beautiful to see as well. 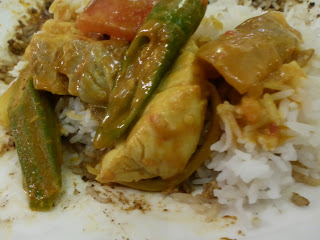 My last dish was designed to cool everything down, Banana Flower and Cucumber Salad.  Again, fantastic and refreshing flavors.

Ending my meal was Durian Mouse.  I mean ya gotta try it, right?  I have had durian before, so I knew what I was in for.  I could smell it before it came to the table, but it was really enjoyable and a great way to clear one’s palate of the spicy meal I just had. (Oh, I did go right back to my suite and brush my teeth afterwards.)As I walked back to Raffles Hotel I could not help but think back on my culinary and cultural time here in Singapore. Pretty incredible in so many ways…as is the respect and celebration of so many cultures in one small place.  Yes, there are some tensions, but somehow the cultural politeness of the people of Singapore helps them navigate their differences for the betterment of their country.  Now, what about that Silversea Expedition cruise on the Silver Discovererer!