In my continuing analysis of how Crystal Cruises measures up as a “move up” from premium cruise lines and as a “move over” from other luxury cruise lines, my November 13, 2015 cruise on the Crystal Serenity continues…

Having explored Lisbon and Madeira in Portugal and a good bit of the Serenity, we set sail for the Canary Islands (which, by the way, is part of Spain).  Our first stop was Santa Cruz, Tenerife, which is not exactly the hotbed of culture or cuisine (and is better know as a cheap warm holiday destination for Europeans).

Because the Crystal Serenity does not go to bed after dinner, with the lively piano bar, Avenue Saloon,

and the disco, Pulse,

both in full swing until at least 2:00 a.m. we had a rather late night (for research purposes only!)  so the next morning was a bit slow; starting with another lovely breakfast on our balcony.

With no real “must do” highlights we decided to simply take a walk…a long walk…exploring the town, old and new.

One of the more interesting site is the Audiorio de Tenerife, which is a very attractive structure with a small cafe if you are interested. 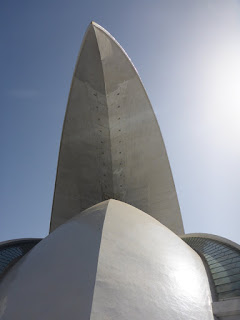 Passing an old fortress we came upon a couple of private/public swim clubs which you can tell would be jam-packed if it was summer.

And then it was onto a what I thought would be a lovely garden, the Palmetum.  The woman that greeted us was surprised and happy to have American visitors, which she said was very rare.  And we were off on a winding uphill path with over 400 species of palm varieties and many other plants in a beautiful setting.

And then, when you reach the top of the hill, the brochure explains that what you are walking on is actually a landfill that was abandoned in 1983, but which is still “fermenting” and the black pipes you see here and there are used to release methane gas…and the water you hear trickling all around you is from the nearby sewage treatment plant. I actually recommend supporting Palmetum, and similar projects, as it is a environmentally responsible way to address our waste problems.  (Just stay on the path! LOL).  Seriously, take a look at the photograph of Santa Cruz, Tenerife above which was taken from the Palmetum.  An architectural masterpiece and a very popular swim club sit by a garden, but would otherwise be adjacent to a garbage dump.

After a walk through town it was time for some lunch before heading back to the Crystal Serenity. Admittedly I was struggling to find a non-touristic place for lunch…and then I saw, ‘er um, heard a place with only Spanish being spoken:  Restaurante El Lateral 27.  Friendly waiters who spoke just enough English for us and good, local, food (though a few things I wanted they were out of).

It was a lovely lunch and then our waitress said we needed a digestive afterwards.  Why not?  Well when she arrived with a literally florescent green glowing liquor with two large brandy snifters with ice I knew I was in trouble.  Tasting like a cross between limoncello and sambuca this licor de hierbas could have been the highlight of the day…and the need for a nap immediately thereafter! 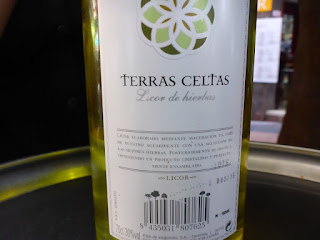 When we returned to the Crystal Serenity Santa’s elves were hard at work getting ready for the holiday season.  It was actually kind of fun seeing how each day more and more decorations seemed to magically appear.  Alas, it was a little early for Christmas decorations for me, but those on the next cruise might well find late November to be “The Season”. 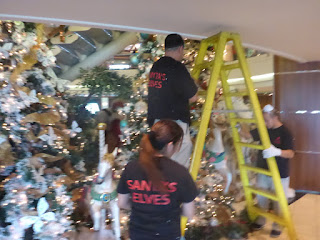 That evening we tried out Prego, Crystal Serenity’s second alternative dining venue.  Honestly, it was fine, but I left a bit underwhelmed (as I did after dining in Prego on the Crystal Symphony a few years ago).  Maybe it is because I have had too many great meals traveling through Italy or that I live in the New York area with so many great Italian restaurants.  That said, there were some real highlights including the “signature” mushroom soup served in a bread bowl.  A disappointment was the “signature” lasagna – which was unlike any lasagna I have ever had (and it is not exactly an upscale dish).

Giving it another chance, we dined at Prego again.  Again, it was fine, but not impressive.  The beef carpaccio and risotto were excellent.  When you order pasta (in my case fettuccine) you have the option of the type of pasta and of various sauces. While my pasta was clearly high quality and tasteful it was dried (not fresh) and I was given a green pasta (assumedly spinach) because I ordered it with pesto.  I did not order or want spinach pasta…but I ate it.  The pesto was good and the addition of coarsely chopped pine nuts was nice.

Another niggle:  Dessert offers gelato and then calls it ice cream.  I asked the waiter and he said they are actually the same.  They are not!  Gelato has far less butterfat, is creamer and thicker with less air. In an Italian specialty restaurant that is just not acceptable.  (It was ice cream and it was good, but not gelato.)

Speaking of ice cream in a positive way, Crystal Cruises excels when it comes to ice cream!  At Scoops, its complimentary ice cream bar, a variety of Ben & Jerry’s ice creams are available each day in either a waffle cone or cups.

Our next day brought us to Arrecife on the Canary Island of Lanzarote, Spain; a curious volcanic island that appears to be on the map of bicyclists and triathletes as well as those interested in its volcanic history and beaches.  But for me, I wanted to explore the island’s unique wines!

We headed out, only to have another long wait for the Crystal shuttle buses (seriously, first up they should be running constantly) and then, after some negotiation, hired a taxi to take us to the famous lava fields; opting to avoid the bus tour.

As we headed out of town I sight I did not expect:  A Volkswagen Westfalia Vanagon campermobile almost identical to mine; though in far worse shape! 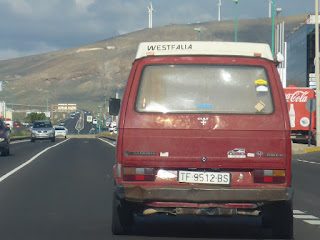 Soon we began to see some very low growing grape vines (not dissimilar to those you see on the island of Santorini in Greece.  However in Lanzarote the vines are protected from the salt air and ocean winds by low semi-circular walls made of volcanic rock and are planted in very thin soil covered by volcanic dust.

The wine would have to wait as we headed to Timanfaya National Park.  What I didn’t know is that you are required to take a bus tour of the park, which is narrated in various languages (be sure you get on the correct bus) and takes about 30 minutes.  (A tip:  The lines into the park can be hours long, but buses and taxis can skip the line.) 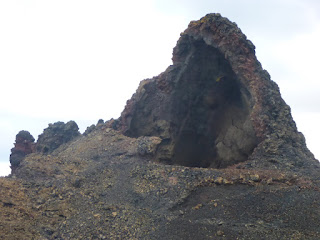 It was interesting enough, but the touristic “pour water down a hole and watch it steam” and watch chicken cook over another hole (which you can then buy and eat) kinda put me over the edge.  One of the few “been there, done that” environmental experiences I have had.  Now, if I could have explored a bit it could have been a highlight!

And now, finally, the wine!  Our taxi driver took as past a few wineries to La Geria for a wine tasting of the various offerings.

Fortunately, we arrived in between buses so we were able to taste some of the rather interesting and higher quality wines, rather than the cheap stuff doled out in tiny plastic cups to the later arriving throngs…who must have also just been to the volcanic fields. 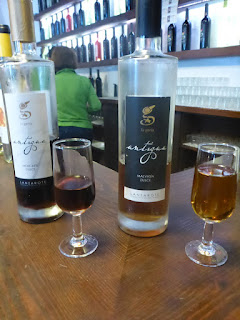 The Moscatel Dulce was actually quite good and a bottle found its way home with me.  Ya never know!

Our taxi dropped us off in town, which was not terrible inspiring.  I said, “That’s it.  There has to be something down one of the side streets!”  and with that I turned down the first alley and saw it: Museo del Vino!  And the tapas crawl began!  (Again, ya never know!) 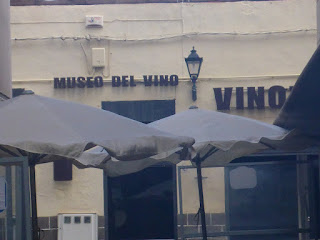 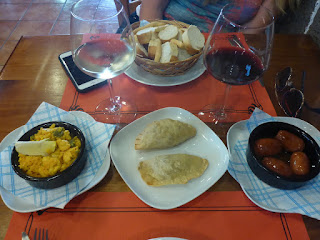 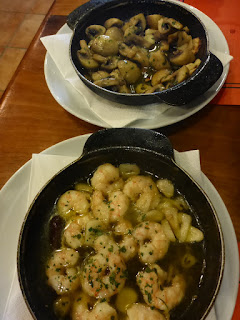 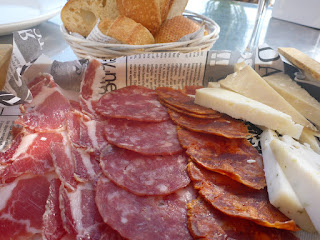 It was then back to the ship and time to enjoy a sea day before arriving in Malaga, Spain.

Unfortunately, I encountered a major service flaw in the Main Dining Room. It was a one-off situation, but worthy of note.  We needed to have our assigned late seating table moved (not an issue) and our butler took care of it seamlessly.  When we arrived we were quickly escorted to our new table and was told it would be our table for the remainder of the cruise.  The service is was fine and the food quite good.  We were happy.

However, the next evening we arrived and “our” table was occupied so they put us isolated, in a corner, with my view being a mirror…although it was a table by the window.  Making matters worse our table wasn’t properly set with glasses, etc. missing.  An oblivious assistant waiter came over to serve bread and when I asked that he not until the table was properly set, I got a good dose of “attitude”.  However, once I made it known that was totally unacceptable (not that I should have), we probably had the most cheerful, competent and friendly waitstaff of our cruise.

I have always said that the service makes the dining experience far more than the food and this night was proof of that.  There is no such thing as perfection and a true luxury cruise line can turn that push of your “hot button” into a success…or a disaster that sticks with you.  Fortunately, Crystal addressed the issue quickly; so with our service actually outshining our cuisine (which really was wonderful) Crystal Cruises turned was could have been a disaster into a positive.

For your Food & Wine Lovers:  Look forward to my next article!  Crystal really sparkles in that one!!

Interested in booking a Crystal Cruise? Please give me a call:

Or email me at eric@goldringtravel.com.