Before getting into the Food & Wine and travel experiences, I thought I would go through a number of first impressions and observations concerning things that I, or others, did not think of…or at least did not think through…before starting our river cruise on the AmaCerto.  They will give context to the articles that follow.  (Answering them up front may well enhance your river cruise or, at least, your decision as to whether a river cruise is right for you.) 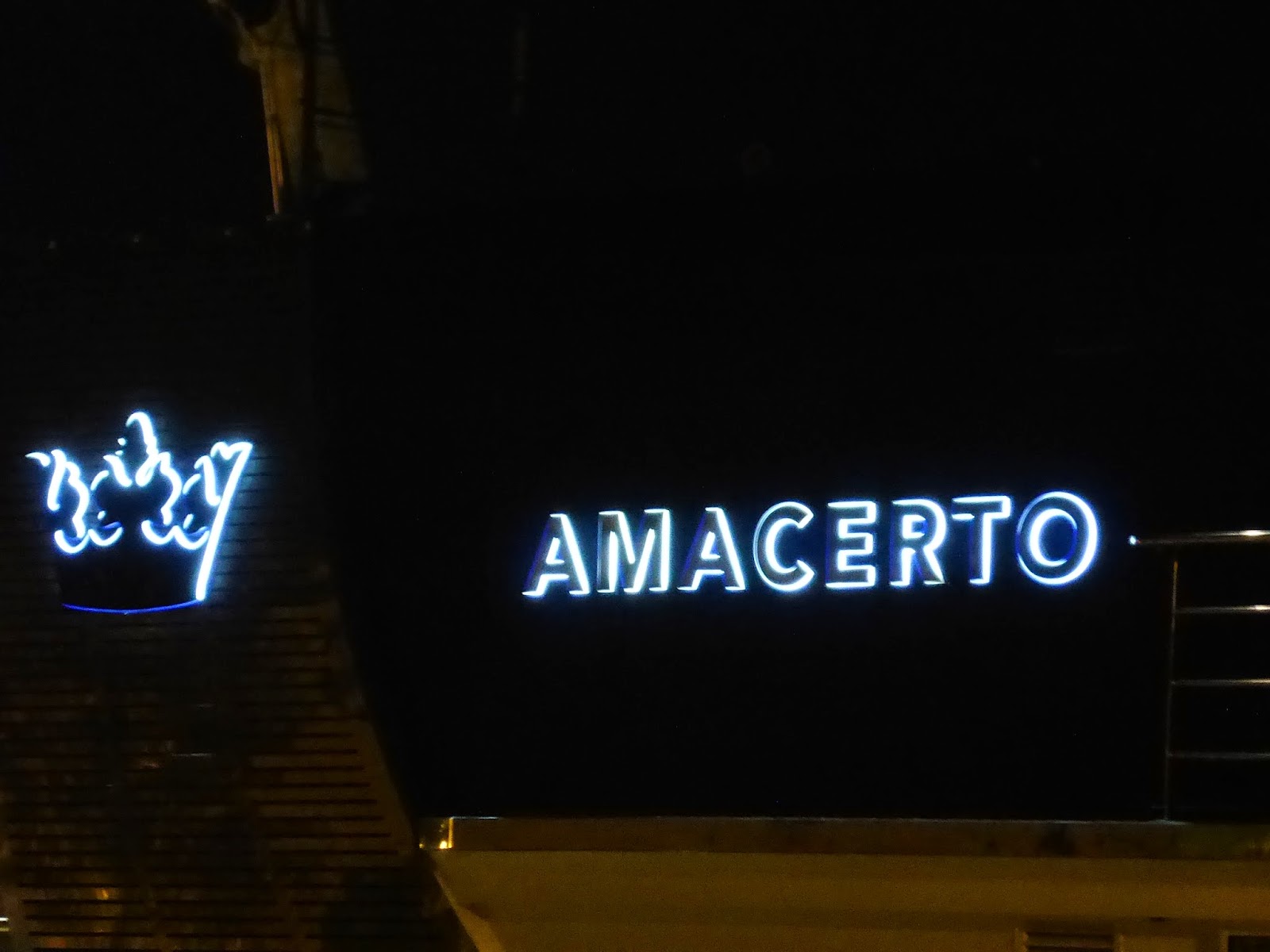 1.  Rivers?  We are traveling from Amsterdam to Budapest, but the vast majority of people on this cruise really had no idea what rivers we were traveling on or how or when we change rivers.  We are sailing on the Rhine, Main and Danube rivers.  We travel upstream (against the current) all the way to the Main River (pronounced “Mine”) where we will eventually pass the Continental Divide and then be going downstream as we will be on the Danube.
2.  Countries?  We are visiting Netherlands, Germany, Austria, Slovakia and Hungary including the capitals of Amsterdam, Vienna, Bratislava and Budapest.  I am quite confident many people on this cruise don’t realize Slovakia is on this busy itinerary.

3.  Locks?  Yes, locks.  Lots of them.  Sixty eight (68) of them.  The lazy curves in the river they show you on the brochures are there, but there are plenty of concrete walls you can reach out and touch as our ship traverses lock after lock (especially on the Main River) raising or lowering the ship 10+ feet at a time.  (And there are industrial parts of the rivers which are passed through as well.) Between the process of pumping water in or out and waiting for other ships, it takes a good bit of time that isn’t always scheduled as the locks work on a first come-first served basis.


4.  Docks?  Unlike ocean cruises, there times when you dock you are going to be tied up to other ships where you (or they) will walk through their lobby or over their sun deck.  It sounds strange, but it works quite seamlessly.  What else does this mean?  It means you may want to keep your stateroom curtains closed as the neighboring ship is literally right in your face!  Also, because the river height varies greatly, when the river is lower you may be tied up to a bulkhead (wall) so you will not have any view.  But, of course, other times you do have a beautiful scenic view.  What you will not experience is much in the way of cruise terminals or security lines. (Even your boarding card is literally a cardboard card.)

5.  Speed?  As the AmaCerto gets underway I immediately notice one thing I did not expect…and, thinking back, I have no idea why not:  The ship moves much faster than I thought it would.  Visions of virtually drifting down the river are crushed, as the AmaCerto goes upstream fighting against a current increasing to about 6 knots.  And then there is the other thing that strikes me:  We are traveling a long distance and it takes a lot of time and speed to get there. Not to worry, there is plenty of lazy cruising too!

6.  Time in port?  While there are ports where you will spend the better part of the day, usually you spend only a few hours in port…sometimes only in the evening.  We are traveling 1,811 kilometers (1,125 miles) in essentially 12 days so we really do need to keep moving.  While many of the ports are small walkable towns, there are only a few times that long leisurely lunches or hours of shopping are going to happen.  But, it is quite doable (as I will write later).  I have noticed that the timing of the ships in port are well manages, so that the small villages might have two ships in port so as not to overwhelm them.
7.  Tours?  The vast majority of tours are included in your cruise fare.  There are a few that are “limited edition” tours which simply means they are capacity controlled.  And there are a few that are extra cost.  While it is early days, the overall the AmaWaterways guides are friendly, professional and knowledgeable.  This is a huge help when you are taking a brief tour as you come away feeling like you learned something without rapid fire facts being shot at you or you are told nothing.  And they are focused on getting you back in time for the next meal, so those luncheons off the ship aren’t going to happen too often unless you make them happen.

So now, let’s talk about the onboard food and wine experience!

Onboard an AmaWaterways river cruise is a culinary experience, but with a focus on its overall market; not necessarily the foodie or wine buff, though efforts are made to keep them happy too.  What do I mean by this?

AmaWaterways is very good about offering local fare and wines while also offering a menu that both the common North American palate and vegetarian palate can also enjoy.  So, for example, while cruising in Netherlands Dutch meatballs were offered and while cruising in Germany pork schnitzel and spaetzle (thin pan fried breaded meat and small flour dumplings), marinated beef with pickled red cabbage and Reuben sandwiches, among other German fare, are offered. Fish is a regular offering, along with a vegetarian option, with steaks, salmon and the like (as well as really good potato wedges!) always availoable.  Usually, but not always, at least one of the wines offered with the meal is from the region but it always pairs well with the menu.

Other things that AmaWaterways does well on the culinary side of things:

–          There is always having gluten-free options both in the Restaurant and for light breakfast, snack and light lunches in the Lounge.

–          There are always a really good selection of cheeses and breads available at meals…and I mean really good on both counts!

–          The soups are almost uniformly excellent with no flour fillers; and when it says “cream” it usually doesn’t mean milk cream but creamed vegetables and/or a foam of cream.

There are regular “surprises” late morning such as Rudesheimer coffee on the way to Rudesheim and German Fruhschoppen (beer, three kinds of sausages, bretzels, potato salad and more) on our way to Bamburg.

AmaWaterways’ wines are generally quite acceptable and inoffensive (which is good), but it also creates a bit of an unusual phenomenon.  As close to 99% of the guests are quite satisfied with the wines offered complimentary at lunch and dinner, there is almost zero demand for some pretty wonderful extra-cost wines.  While I know they exist because I made some selections for my Food & Wine Tasting onboard later in the cruise, getting a wine list was a bit of a challenge.  And when ordering one it sort of surprises the staff as, with limited space onboard, the wines are essentially stored in a separate area.

What is interesting is that it is AmaWaterways policy that your wine glass be truly filled at lunch and dinner.  AmaWaterways wants you to feel like complimentary is, in fact, a compliment and not a point of frustration.

A criticism:  Other drinks are paid for and are by a carefully measured shot.  So for me to have a “normal” Glenfiddich the 6.50 Euro price is actually 13 Euros, or about $16.50 per drink.  That is a bit steep.  But the bartender is nice and is as accommodating as he can be.

There are also complimentary wine tastings offered both as a tour and as an evening tasting.  In Kitzingen an evening wine tasting in one of Germany’s oldest cellars is offered, which most everyone found as a fun hour or, led by a costumed “leader” and the wine princess of the neighboring town.  It was a cute introduction to the various wines of the region (if not the best). 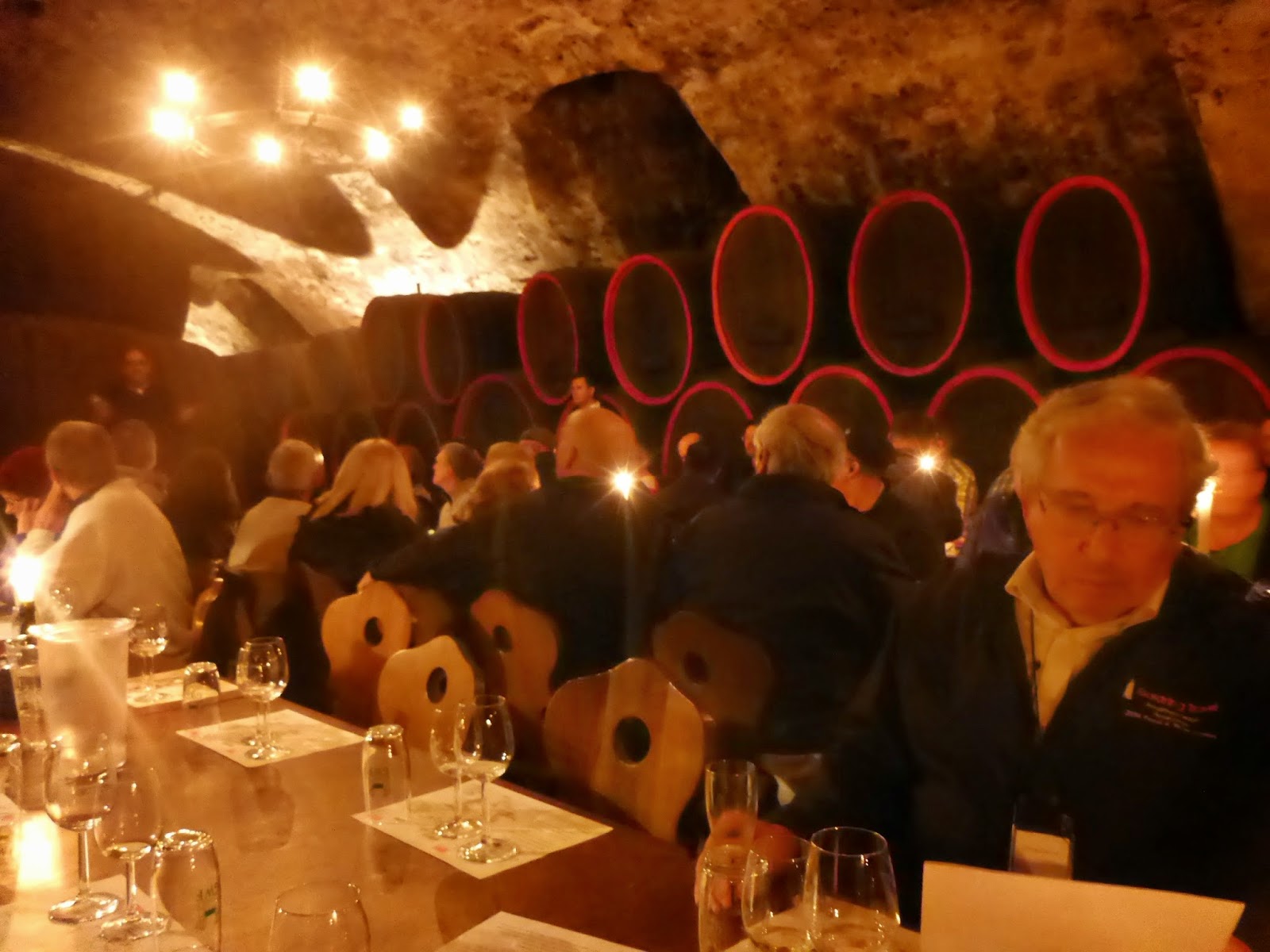 Just outside of Wertheim a “curious” tasting at Johannes Deppisch Winery was offered as a tour (and it was the day after the Goldring Travel Private Riesling Tasting which I will write about in the next article). Because it was a “limited edition” tour I expected more of a true tasting, but it definitely focused on the majority of those who took the tour – who loved it, but for me it was painful. We arrived at Deppisch Winery and are greeted by the owner, who is wearing lederhosen and a wooden bow tie holding a tray of a Josecco Pink trocken (dry) sparkling wine (which sucked about any moisture I had out of my mouth and sells for about 4 euros a bottle).

From there we were led through the gift shop into the tasting room where we were served a Dornfelder trocken red wine accompanied by “bacon cake” a/k/a bacon quiche….thankfully (and ‘nuf said).  Anyone who does even semi-serious wine tastings knows that you (a) never serve a red wine first and (b) never serve a fatty strong flavored smoked or fried food (bacon is “all of the above”) if you are going to be following with lighter wines.  It was downhill from there.

From this, however, comes the reality of wine tasting, cruising and people:  The vast majority of the AmaWaterways guests loved the wine tasting and loved the lederhosen/wooden bow-tied gentleman. Maybe I was spoiled from the day before.  Maybe I am a bit of a wine snob.  Maybe I just didn’t get it.  Maybe I did get it.

The point is when it comes to food and wine AmaWaterways does a very good job of offering something that appeals to everyone.