Our second day in Taipei had a very simple plan:  Eat!

But it is not really about eating, but using food as a way to learn the culture, see the city and have a bit of fun.

We met up with Tina, co-owner of Taipei Eats, in the XinYi area for our tour.  Tina is quite international, and having gone to college in California, is easy to speak with and relate to.  When she told me her partner had lived in “Jersey” (rather than New Jersey) I did a double-take as only people from New Jersey call it “Jersey”.  (I usually say I am from New York because most people have no idea New Jersey even exists.)

Our tour included another couple – British with a baby.  That’s right a 2 month old baby- going on a long walking food tour on a cloudy, misty, day.  Clueless new parents and a baby could have ruined our day, but Tina handled it all well…and I, who loves being a dad (I am on this trip with my daughter), couldn’t blame the baby after he started to all apart after two hours. (The breaks for feedings, diaper changes, formula making and crying fits were one thing, but the bonus was when the guy didn’t have any money and couldn’t find an ATM that would accept his card…but he had Thai baht and wanted to exchange them.  Huh?)

So off we went with Tina, a really nice young Taiwanese woman (who regularly spoke of her father with loving affection – a very sweet touch) with a California accent – and a clueless young British couple working and living in Thailand on holiday with their 2 month old – to sample the foods of Taiwan.

We started walking down a quiet street with vendors of food and and household goods on both sides and almost immediately stopped for something akin to an omelette made with various vegetables. (My daughter and the other woman were vegetarians who also would eat fish, so we had some modifications of the normal offerings, which Tina did adeptly.) 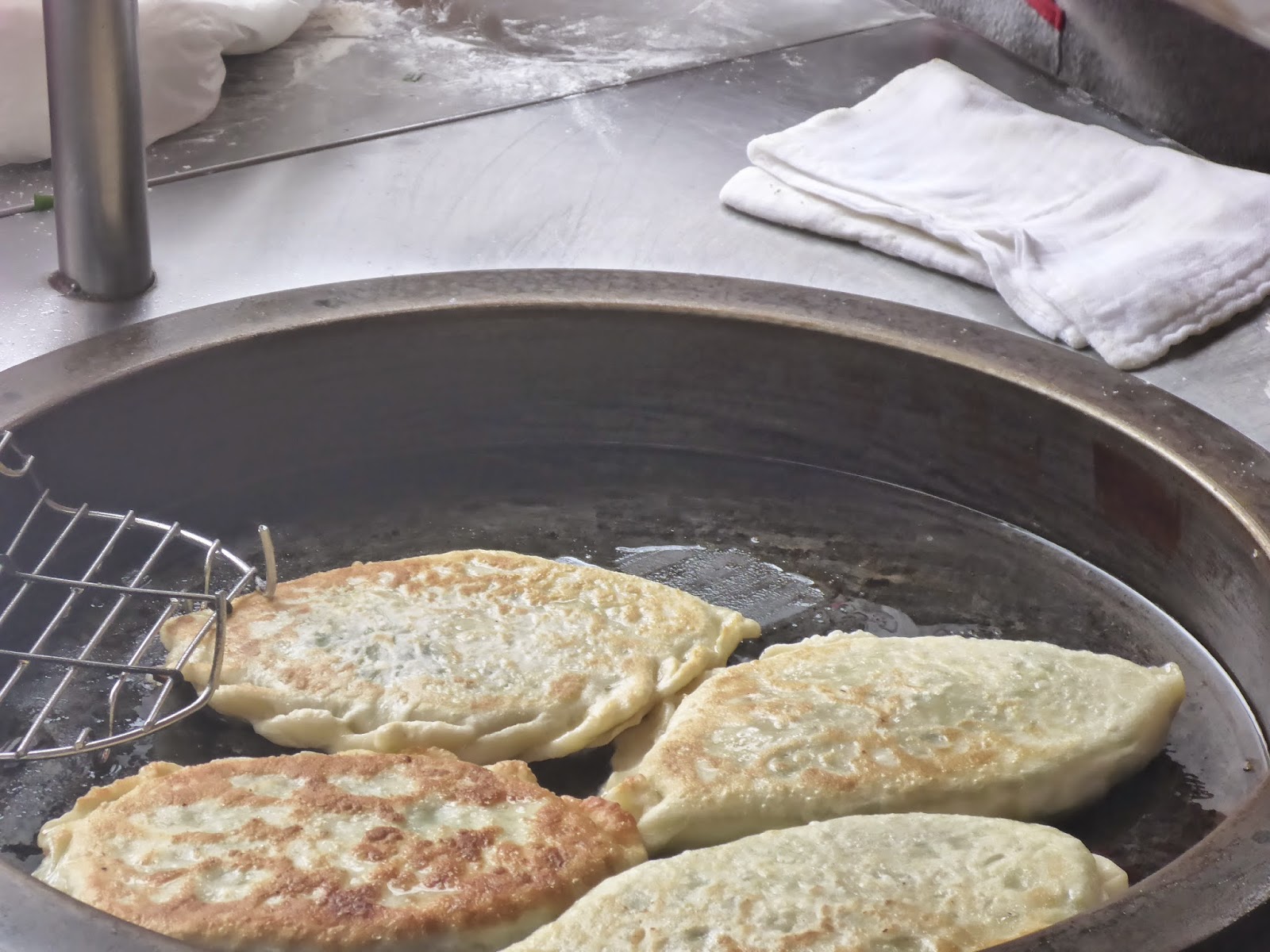 Passing by the whole roast chickens (and I mean whole): 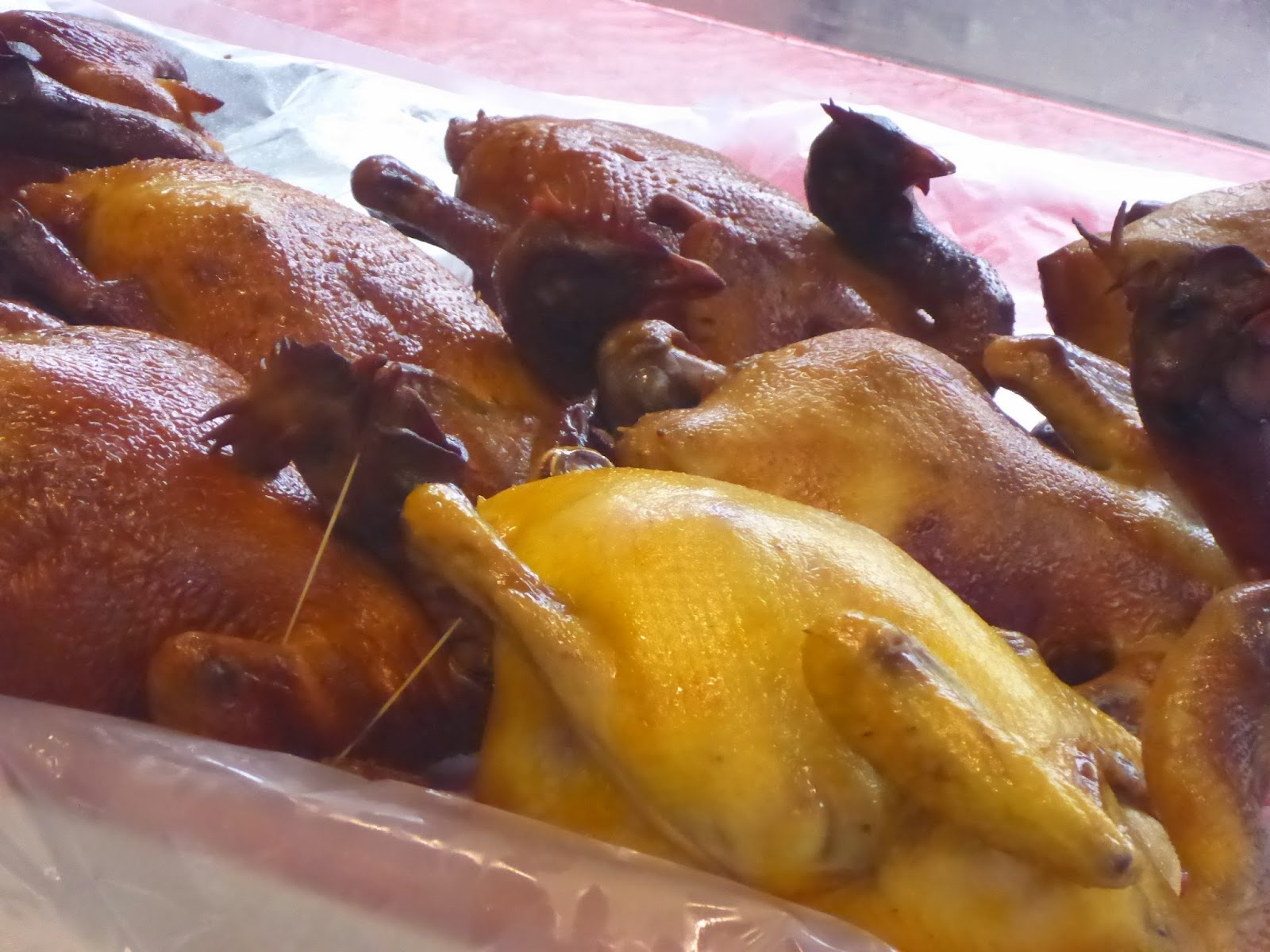 I came across pig’s knuckles that looked too good to pass up, so….

They were delicious.  There is a smokey sweet flavor to most of the pork dishes in Taiwan and this was a really good example of that.

I had wondered how this tour would take three hours (though I did skip breakfast just in case), but it is really a wander through different neighborhoods.  I had heard that Taipei is not the prettiest of cities and that is most certainly true.  But there are subtly distinct styles as you walk about.  I can’t tell you what style goes with what kind of neighborhood, but you can see the difference.  (The financial district, of course, jumps out at you because the buildings are modern rather than drab and boxy!)

I wish I had a good picture of the Thousand Layer bread.  It could have been my favorite food of the tour…though the famous Soup Dumplings were a highlight to come.  I know the ingredients are different, but it almost tasted like Jewish kugel. Suffice it to say the woman who owns the stall was thought by the other locals prime to fail because she only sold one thing, but it is so good that she is now the most successful person in the area.

I am not going to go through everything we ate because it would take pages to describe foods that you probably would not recognize and there are better sources for, but I will hit some highlights…and one definite low light.

First, the low light (but still a “life experience”, so I guess it was also a highlight):  Stinky Tofu.  I will eat just about anything and I did take two bites of it.  Fried and drizzled with a soy vinegar mix, my description of the taste:  You know that pair of dirty sneakers that are two years old and smell horrible…so much so that you need to keep them outside?  Bite on the inside lining, swish it around your mouth and then swallow it.  Stinky Tofu has that aroma/flavor.  I have never eaten anything worse in my life.  I am glad I tried it and I am certain I never will again!

Not really a food item, but you do chew it, I tried betel nut, which is popular with the older generations.  The nut wrapped in a leaf in order for some chemical reaction to occur and when chewed it is supposed to give you a bit of a high. It is thought to give you energy, keep hunger pangs away and make you feel like you need less to drink since you salivate…a lot.

The concept is you bite off the top of the nut, chew it, spit out the first bit of juice and then chew away and swallow the large amounts of saliva.  As you chew it your saliva turns bright red/orange…as do your teeth (which I guess is why it is forbidden in Taipei 101’s Observation Deck)…and you do get a bit of a buzz.  For me it was like having a beer on an empty stomach:  Brief, but you knew you had one.  Apparently I was the first of Taipei Eats clients that has tried it and I would not be opposed to trying it again, though I don’t think I feel the need to do it again on this trip. 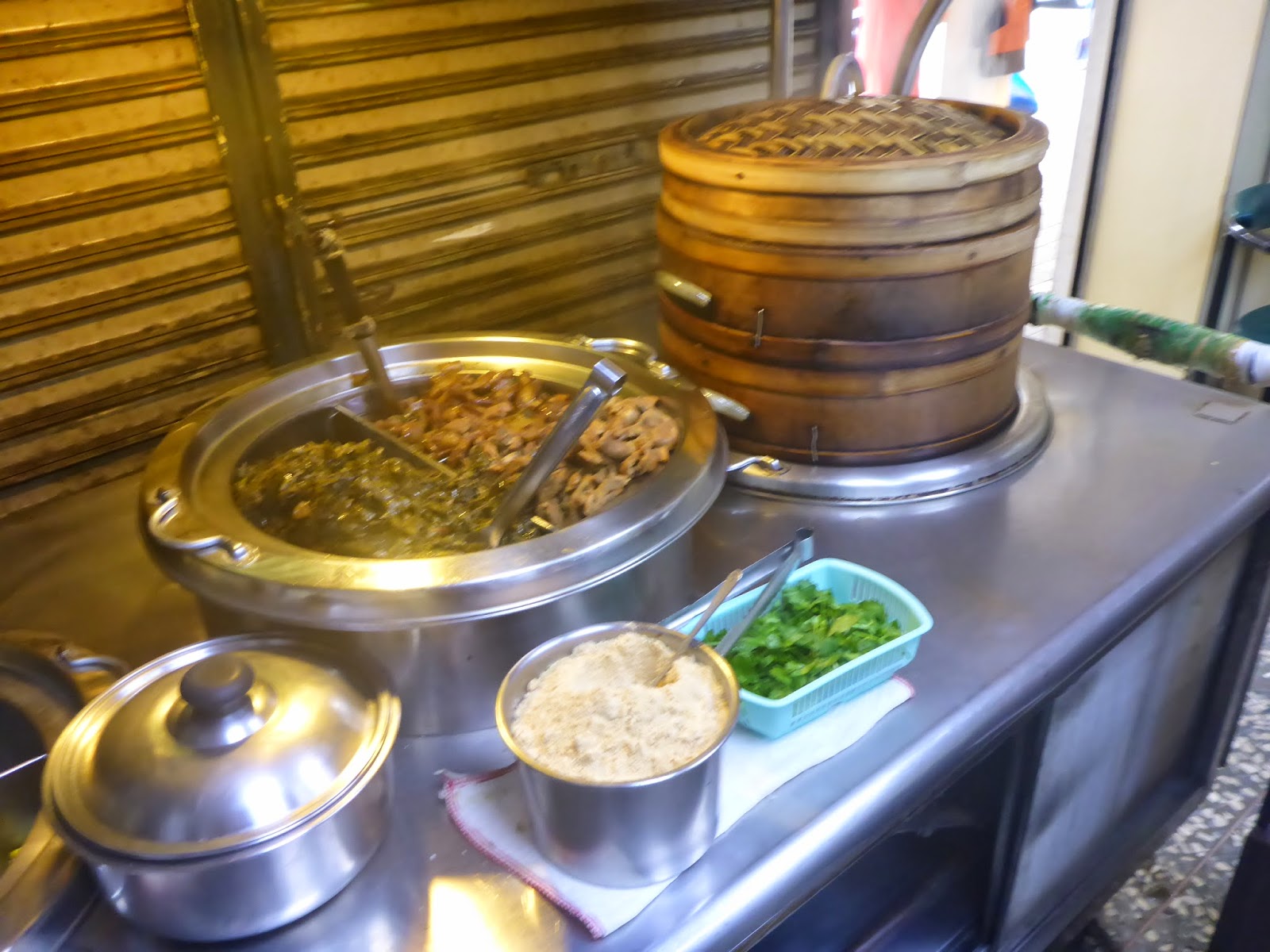 Pork buns (Gua Bao), a/k/a/ Taiwanese hamburgers, are the typical Chinese bun filled with chunks of pork topped with cilantro, pickled mustard greens and topped with five spice powder and crushed peanuts.  I usually try not to eat everything, but this gem had my name all over it.  Yum. 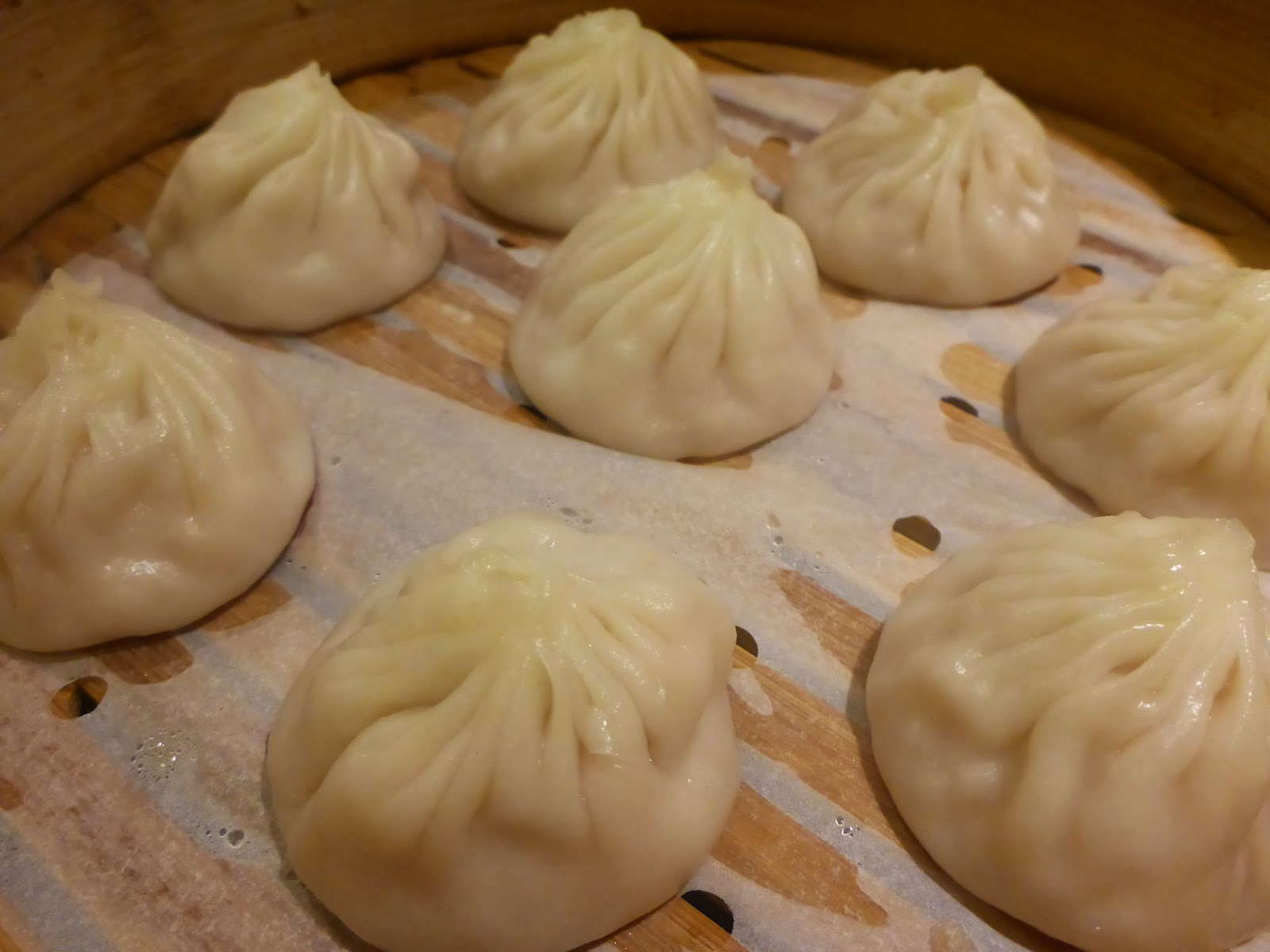 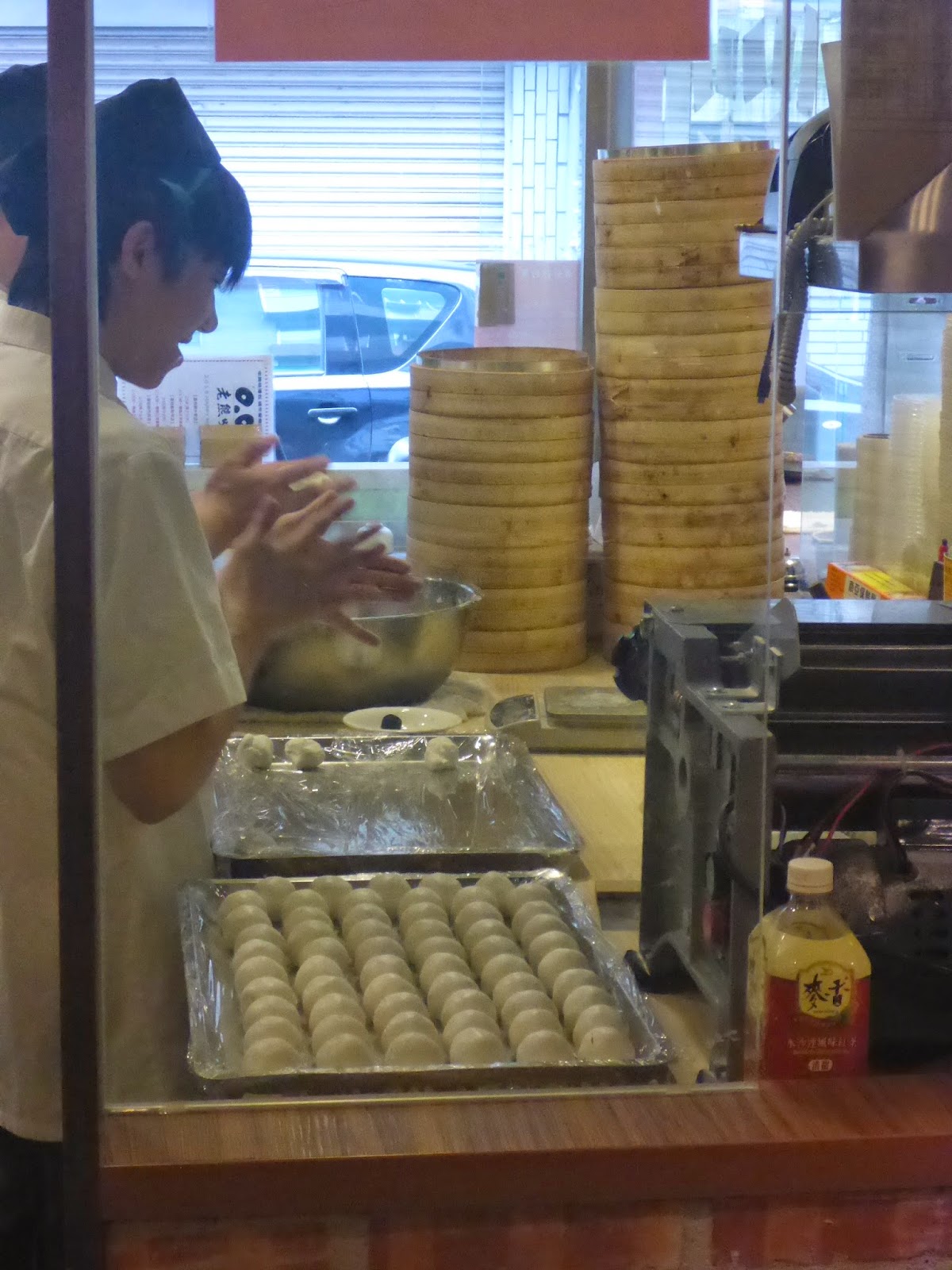 Soup Dumplings!  We stopped at Bear Cuisine for these.  According to Tina’s father these are the best in Taiwan…better than the more famous Din Tai Fung which has expanded its soup dumpling empire to something like eight restaurants reaching as far as the United States.

These are a Taiwanese delicacy of small pockets of flour filled with pork and broth.  How does the broth get inside the dumpling?  I know, but I am not telling!  They are very tasty and also fun to eat.  You dip one in a very light soy and vinegar mix, put it on your soup spoon, bite a small hole in it so that the steam and some soup spill out and then enjoy the whole thing. Awesome!  (They also make crab and vegetable dumplings which Tina arranged for our vegetarians.) 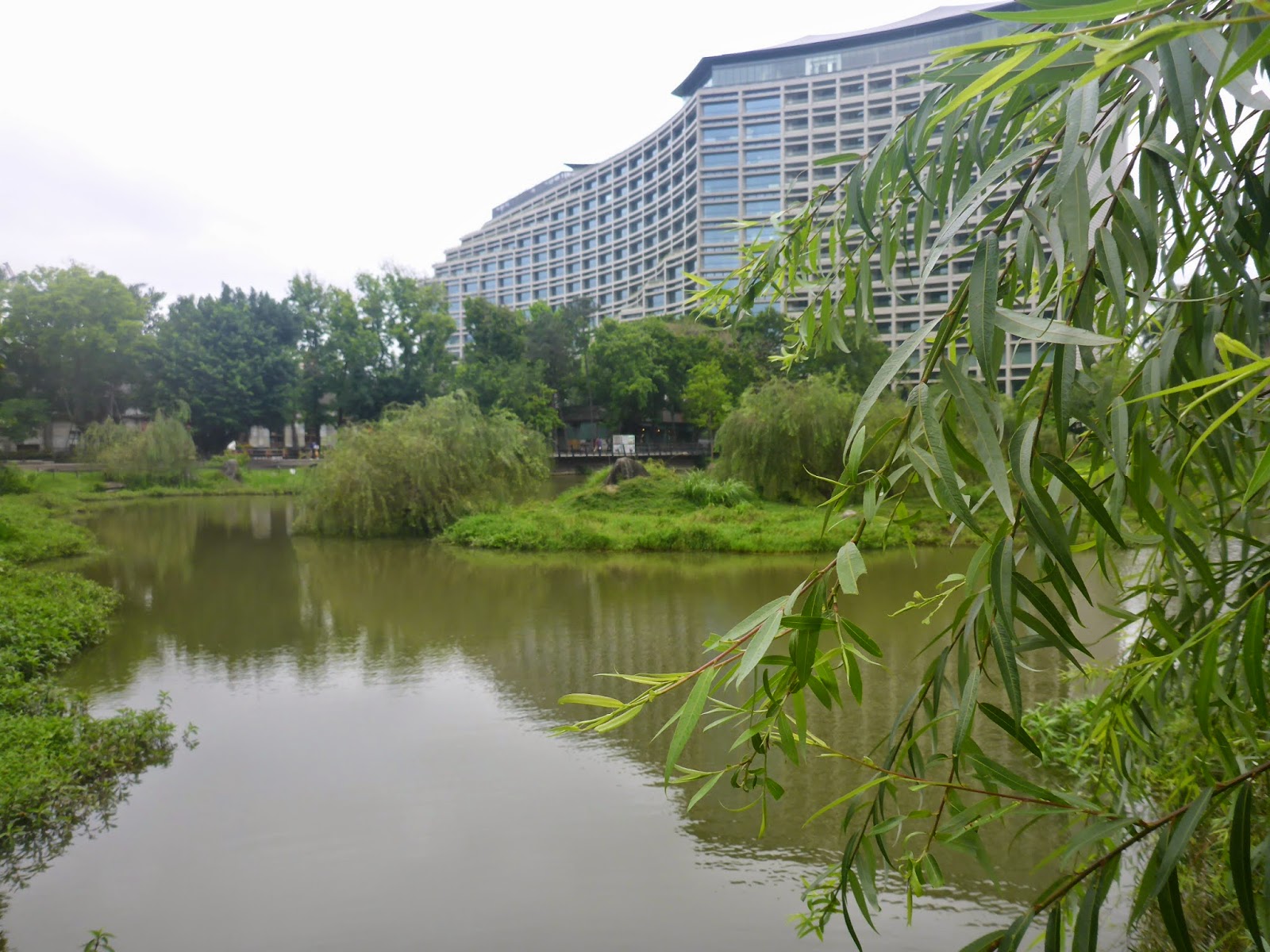 Our travels took us to the Songshan Cultural and Creative Park, a former tobacco factory, and a rather upscale hotel and mall where a tasty pineapple cakey dessert is made.  (I have noticed that the pineapples in Taiwan are less sweet than the ones generally found in U.S. markets.  I actually like them a bit more.) 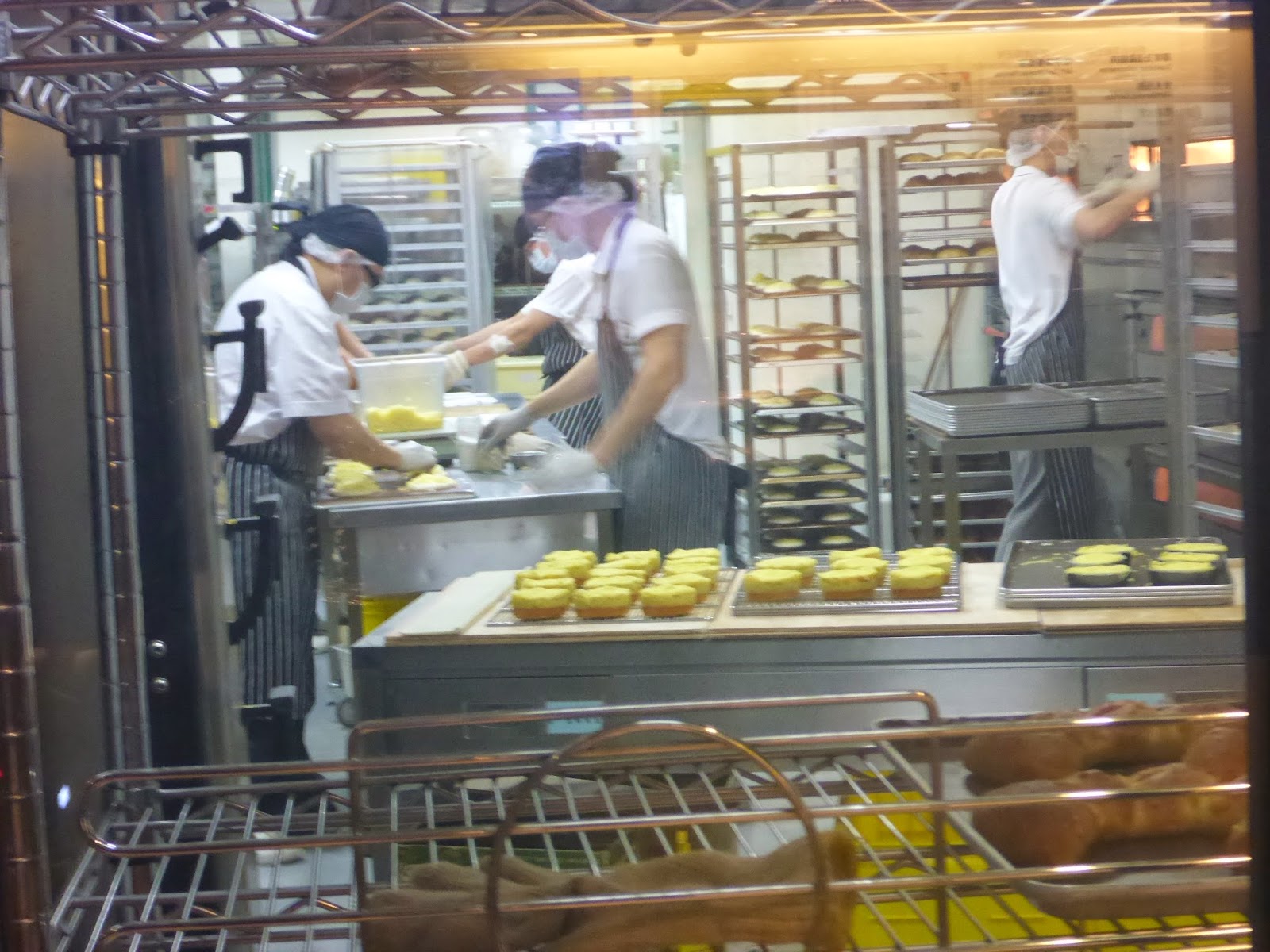 As we walked and I saw some more upscale shops and then a Chiang Kai Shek Memorial with many Chinese tourists milling about.  It got me wondering about the Taiwan-Mainland China relationship, so I started as questions about the Mainland Chinese that visit and if the local Taiwanese shop in the luxury stores or not.

Apparently it is a bit of a sore point in Taiwan as the Prada and Fendi type shops are actually owned by Mainland Chinese businessmen, the tour companies that bring the mainlanders are also owned by them, as are the buses, etc.  So most all of the luxury sales and tourism from Mainland China have a very small impact on the Taiwanese economy.  I personally find this very interesting as it gives me some great insight as to how, or maybe how not to, attempt to engage the Chinese travel market.

As our food tour wound down, and my stomach filled up, we made two more noteworthy stops.  The first was for a rice, pork and boiled peanut dish with dried pork shavings 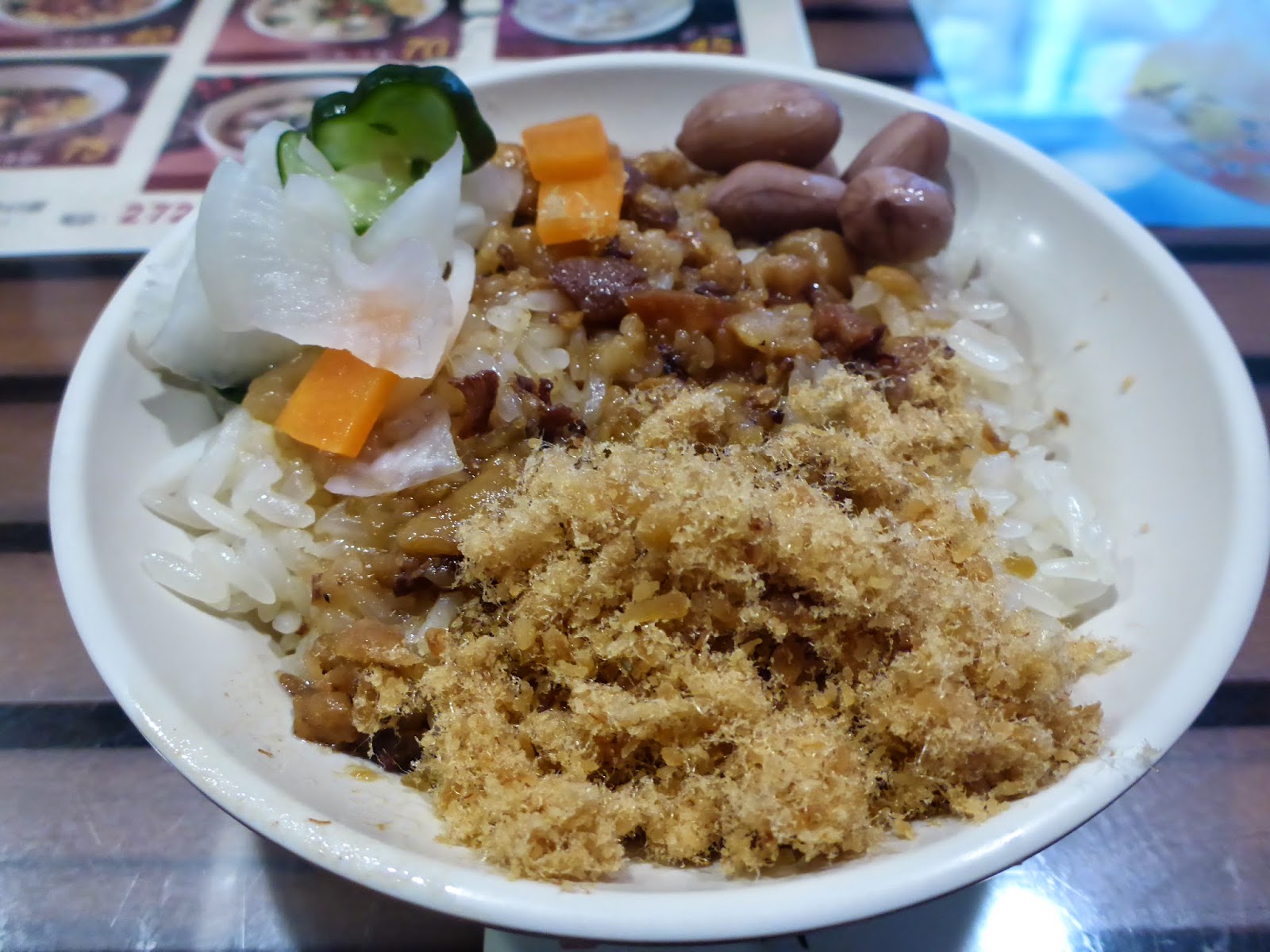 and then, finally, some incredible Taiwanese ices that were super high quality.  My daughter went for their famous Pineapple, Mango, Plum combination and I went for the Lychee for which they were also known.  An absolutely delicious and refreshing end to a fantastic food tour.

Full and tired it was time for a nap…and not just for that poor baby.

By they way, I am not done with Tina!  Tomorrow night we are hitting another night market and with a great guide who knows what I will try…and at least I will know what I am trying!

After two days in Taipei I can say I like this city.  It has a nice scale to it.  The people are friendly. The food is great and, as you will read in later articles, there are some pretty interesting things to see and do even though there are not many impressive tourist sites.