My last day on SeaDream II was interesting, relaxing and a bit strange; not my normal day to say the least. 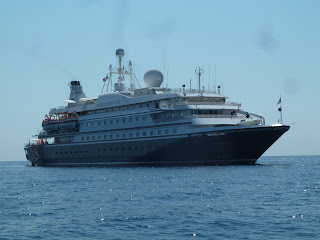 Because of the cancellation of Portovenere, we anchored off of Porto Ercole, Italy which is located just at the southern edge of Tuscany.  I assume this rather sheltered port was chosen so that the water toys and swimming in the ocean could be enjoyed.
But to me Porto Ercole appeared to be a dying town with virtually nothing of interest.  The boats bobbing in the water were not well kept (some notably having names coarsely painted on their sterns with an old paint brush.) 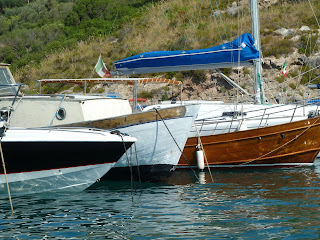 I walked into the local fish market and found fish that was not exactly the catch of the day and it was being sold by an old woman with a persistent cough.  The town plaza, as it was, contained what seemed to be a small retirement apartment building with a supply of  benches with elderly Italian men quietly and slowly discussing how to solve the world’s (or, more probably, each others’) problems.
But just outside the port, high on the hillside is a luxury hotel, Il Pellicano, with a two star Michelin restaurant. It is, in my world of travel, a pet peeve:  When a hotel becomes the real destination rather than a place that enhances your experience enjoying where you are.  Don’t get me wrong:  The hotel is beautiful and luxurious.  But it stands by itself looking down on – but more so beyond – Porto Ercole.
I was back on the yacht quickly…not that it was a bad thing.  For many, if not most, on this particular cruise the yacht is their destination and the water skiing, wave runners, swimming and pool were being enjoyed…as was a lot of lazing in the sun.  That is not, to my understanding, the norm, but as I often say, each cruise is different so those once a year cruisers who profess definitive expertise about a cruise ship or line based upon one sailing should be listened to with caution.
I found nice table by the Top of the Yacht Bar set for lunch.  As it was my last chance, I put SeaDream Yacht Club to the “hamburger and hot dog test”.  It is a simple test that so many cruise lines fail.  SeaDream passed with flying colors.  Here’s why:  I ordered a hamburger and a hot dog, but June asked me which I would like first.  I told him he could just put them on a plate together, but he replies that one might get cold and it was no problem.  Nice!  After he relented my burger and hot dog were delivered perfectly prepared, on toasted buns with garnish…and, just to be safe, June brought me a side bowl of French fries.  Oh, yes, they tasted great too. 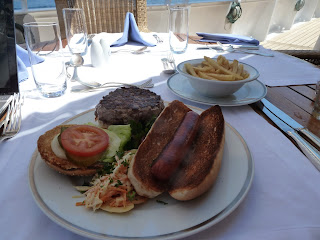 After I finished, the Captain Terje Willassen came over and sat down for sort of a debriefing and a friendly chat.  That was a very nice, and personal, touch.  And, of course, one can’t help but enjoy the pride he exudes about his ship and his crew.
Unfortunately, the time for packing was upon me…but before that I had to have a bit of a soak in the hot tub.
Chef Tomasz Kozlowski graciously arranged for me to tour his galley.
It is a very compact affair; making the delivery of consistently delicious food a bit more of a challenge.  But was amazed me is the small galley staff that really has to be talented.  You see the galley is so small that each chef is essentially responsible for an entire dish or related dishes.  This is not a typical cruise ship operation where as many as six people can prepare various portions of a dish.  This is “below decks yachting”!
But even with the limited space and staff Chef Tomasz explains how meals are prepared ala minute, as evidenced by the state of the galley during my 6:00 p.m. tour showing only a few items which needed to be prepared in advance for the evenings eight course Degustation Menu having been started (such as the Chateaubriand and souffles shown below) . 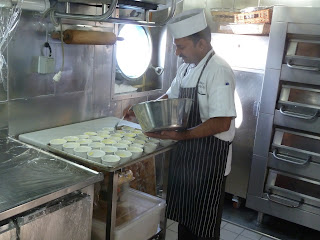 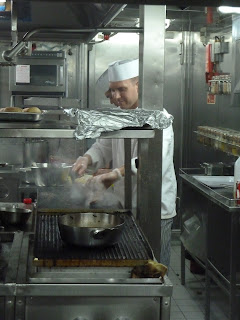 My Kuwaiti friends arranged for a small private dinner off the ship at the Il Pellicano’s two star Michelin restaurant (which I had to decline). SeaDream arranged for one of its zodiacs to transport the intrepid six to shore…albeit the well-dressed group got soaked when the wake of a passing boat drenched them.  (Yes, SeaDream will go to that extent to make things happen.)  But don’t feel sorry for me.
After the Captain’s Farewell Speech and cocktails 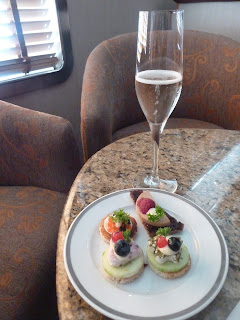 We enjoyed the Degustation Dinner which was excellent.  My other new friends invited me to a table where the five of us enjoyed some extraordinary wines pared with our courses; so you know I was very, very happy.
After dinner with everyone back onboard we each talked about our wonderful last meal and enjoyed a last drink or two before heading off to bed.
We knew we would see each other at breakfast before disembarkation as on SeaDream Yacht Club it is quite an informal and unhurried affair.  With only 110 guests, and having until 10:00 am to disembark, there is no need to shock one’s system with a very early wake up or a rushed breakfast.  I must admit having a low key disembarkation where you aren’t encouraged to claim your luggage as soon as possible is a rather unique experience.
It was, of course, a perfectly consistent was to end my cruise.  With great service, a nice meal and a genuine feeling that SeaDream Yacht Club’s staff and crew not only understand what casual Five Star Service is about, but enjoy delivering it…right up to your last minute onboard…you disembark happy.