The Goldring Travel 2017 Culinary & Cultural Cruise aboard the Seabourn Encore continued with a well needed, less chaotic, pace after our day in Tangier, Morocco with our arrival into Cadiz, Spain. 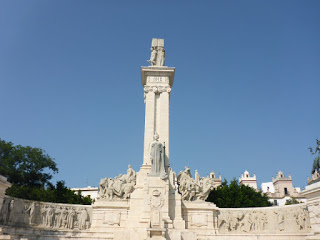 I took a walk around Cadiz, where I have been before, wandering the streets until I came upon the local market, which has been rebuilt into a fairly modern affair.  It was extremely interesting from a culinary standpoint, but lacked the cultural flavor I remembered.

With Cadiz having access to both the Atlantic Ocean and the Straits of Gibraltar the variety of fish and shellfish was amazing. 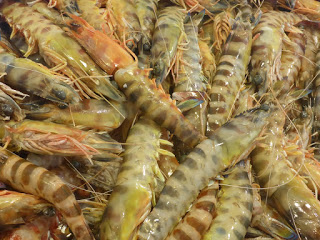 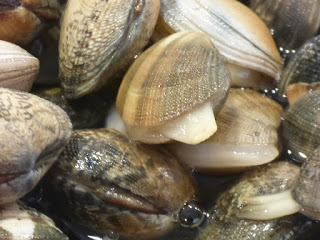 I also watched a man who scooped and bagged olives with great flare and a smirk just screaming, “Yes, I know I am that good”.  And then I saw some pickled garlic and had to get some.  I would note that the olives in Spain are so much more flavorful and far less salty than the ones we have in the United States.  And the same can be said for its hams and other cured meat.

And you know I picked up some local cheese…including an amazing blue cheese.

I then saw a big plate of fried boquerones (anchovies).  It quickly became my lunch…along with a local beer.  They were delicious, but there were so many and were so large that there was no way I could finish them.  But as a 4 Euro lunch, it was fantastic.
It was then back to the ship to prepare for another Private Goldring Travel Event, possible only because the Seabourn Encore stayed late in Cadiz:  An Evening at Gonzalez Byass, the home of Tio Pepe sherry.

This time, once it got there, we had an actual air conditioned bus for our half hour drive to Jerez, Spain and our private tour including samplings of some of the better sherries 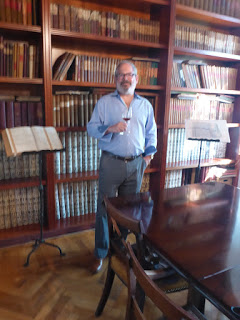 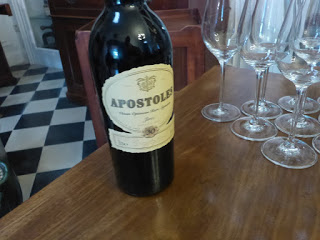 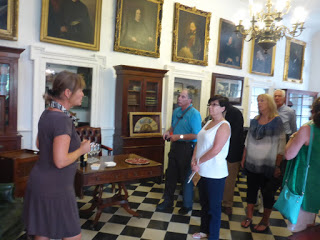 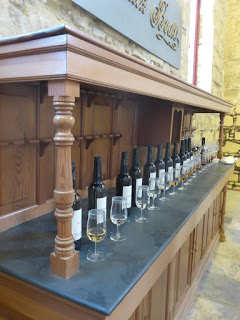 followed by a paired dinner in a beautiful, modern, setting so different from winery itself

But with no rest for our intrepid group, the next morning we arrived in Portimao, Portugal had a Private Shopping with the Chef with the Seabourn Encore’s Executive Chef David J. Whelehan.  Chef David is a quiet, modest, man who has softness about him.  But once you get to know him, he has a very funny dry sense of humor.  I get the feeling that given the opportunity he just might be a bit of a prankster.

One of the vendors from which Chef David has purchased about 400 Euros of jamon came over and slipped him a hip flask bottle of local fruit grappa.  With his hands full I offered to carry it for him…slipping it into my back pocket.  You think he would forget I had it when we were waiting for the bus back to the ship?  Nope!  (Heck, it was worth a try.)

Once back on the Seabourn Encore and a bit of a soak in “my” hot tub it was time to prepare for a somewhat impromptu event.  One of my repeat guest couples wanted to have an event in their Penthouse Spa Suite.  So I arranged for a Wine & Cheese party (with the local cheeses I had purchased in Barcelona, Valencia, Cadiz and Portimao (the delicious Berber cheese in Tangier never made it back to the ship!) along with the figs, apricots, almonds, dates (still on their stems) and candied walnuts.

But there was more:  A Mixology Competition between Michelle Shea, our Adventure Dining Guide chef and mixologist of note versus Head Bartender “The Man” Bobby.  As I was discussing this the evening before, I was, by happenstance, approached by Brian Van Flandern, the Seabourn and Thomas Keller mixologist I mentioned it to him…and he wanted in.  So it would be a three way competition. 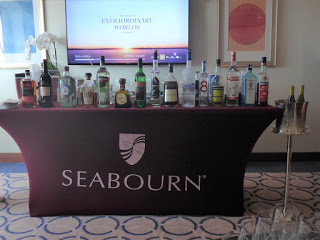 I added a twist:  I brought along the spices and fresh mint from Tangier and each drink had to include at least one of them, whether it be cumin, cinnamon, turmeric, saffron, ginger, etc.

It was a blast.  Each of the three experts crafted totally different cocktails which we passed around.  It was impossible to pick a winner because they were all excellent and all so different.

Michelle, however, decided to show off (or, more properly, kept the fun going with her great smile) after Brian and Bobby left by making craft cocktails as requested by each person.  This supposed hour long cocktail party lasted for over three hours.  Fantastic!
The only problem, if you could call it that, was that the winds had picked up so we were not able to use the huge Penthouse Suite balcony.  But we have such a cohesive and fun group that it wasn’t an issue.
It was, however, an issue for departing Portimao.  We wound up staying at the dock until early in the morning, so we would have an unscheduled sea day; arriving in Gibraltar at 6:00 p.m., which was fine with me as there really isn’t much in Gibraltar.