Having arrived in Falmouth, England an evening before expected, it gave us a chance to explore this quaint seaside town and to enjoy a proper Fish & Chip’s dinner.
Two of our friends invited us to dinner days ago and we were wondering:  The Restaurant, Veranda or Off The Ship. Fortunately we were all in agreement and it was Off The Ship.  So a short 10 minute walk brought us to Rick Stein’s Fish & Chips on the quayside. This is no ordinary chippy, but a beautiful, simple, gourmet chippy (Rick Stein is a famous English chef) where the essence of what makes great fish and chips is foremost; not fancying it up to be something other than what it is supposed to be.
I went with the grilled sardine starter.  It was absolutely beautiful. 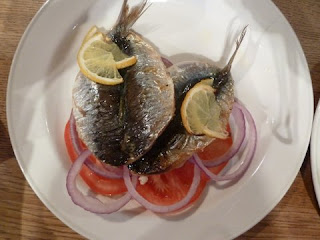 This was followed by haddock fish and chips along with mushy peas.  Perfect.  (So much so that I took a taste before I took the picture!) 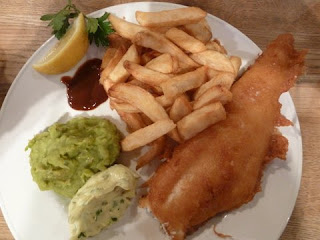 After dinner it started to rain (again!) so it was back to the ship for a cocktail and chat among friends.  To be sure, it was a wonderful end to a rather rocky beginning and those high seas are hopefully behind us.
We woke to another sort-of-sunny/sort-of-drizzly days.  Me and my wife decided to hire a taxi for a couple of hours to see the Cornish countryside.  While the scenery was beautiful, our driver was a bit of a dud. But this is where a keen eye and spontaneity can turn the ordinary into a truly memorable day of travel.
While traveling about we stopped at a local off-license shop so that I could purchase some local wine for our Food & Wine Tasting.  But while there I started chatting with the merchant and a bottle of Mead caught my eye.  Mead, I didn’t know, is a very Cornish fortified wine made with honey.  So you know I had to pick up a bottle.
As we drove southwest of Falmouth we came to the small town of Helston.  Our driver pointed out a rather old, but otherwise non-descript pub, called The Blue Anchor.  As our day was just so-so, my wife said, “Why don’t we pop in for a beer?” And the magic started. 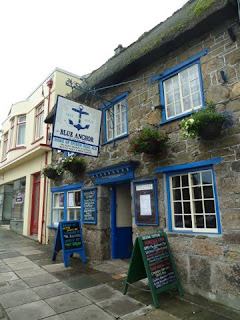 We peered into smallish dark pub and saw a couple of locals who most certainly appeared to be fixtures leaning up against an ancient bar.  We asked – not knowing the reputation of the pub (thank you dud taxi driver) – what was the local brew.  The charming…yes charming…woman bartender behind the bar said Slingo Special, but they also have Medium.  What did I know?  We went with the Special.
What we didn’t know is that Slingo Special is known not only for its unique strong flavor, but its high alcohol content (6.8%…higher at Christmas and Easter!). We noticed a small room on the other side of the pub and wandered over.  It had an amazing old fire with stone seats built in.  We sat by that side of the bar and the chat with the locals and bartender began. 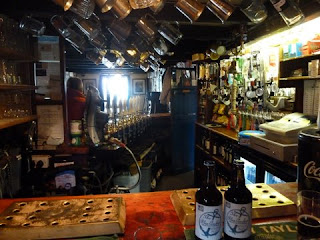 We saw they served pasties and ordered two as the pub became more comfortable. Unfortunately it wasn’t quite noon, so they were not available.  Bummer.
The pub, so we were told, is over 600 years old and is reputed to have the oldest pub-brewery in England…which, as you can see below, is not exactly “state of the art”. 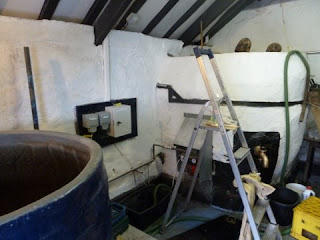 So with the bartender manually placing labels on the bottled beer and one character staggering to the toilet while another explained how he waxes the 500 year old table and the bars once a week (and who has been everything from a sewer cleaner to a landscape gardener), the bartender explained that the locals mix the Special with the Medium…and that the Medium has a bit of a Mead taste (fortunately I had just found out what that meant!).  The reason:  They couldn’t drink Special all day because they would be too drunk.  Live and learn.
After learning that the locals receive a discounted price, which they were not shy to mention, and a couple of good laughs, it was back to our taxi for our return to Falmouth (a bottle of Special and Medium in hand) with the bartenders recommendation that we go to Oggy Oggy’s for pasties.  Let’s just say I was glad I also ordered a sausage roll.
After a walk around we hopped on the Seabourn shuttle bus to the ship and mentioned we had been to The Blue Anchor.  The bus driver said, “How’d you get all the way out there?” and then a discussion of Slingo Special began with himself and the guide.  It is, you see, quite famous and another good laugh was had.
After boarding the ship the announcement came:  The seas will be three times as rough as they were the other night, so batten down the hatches and secure anything that moves!  But now sea legs and stomachs were at hand for all but the weakest and the Seabourn Pride was actually quite a lively ship as we sailed toward Cobh (Cork), Ireland.