The 2015 Goldring Travel Culinary and Cultural Cruise on the Seabourn Quest took a marked turn away from the standard travel activities when we reached Honningsvag, Norway as we approached the most northern tip of Europe well above the Arctic Circle.  This is where I was able to experience the new Ventures by Seabourn program that was launched with our sailing on the Seabourn Quest.

The Ventures by Seabourn program provides its guests with the opportunity to do things as simple and relaxing as a casual zodiac ride to kayaking to exhilarating hikes while accompanied by members of the Seabourn Expedition team.

Our (ad)venture was to birdwatch for puffins, gannet, kittywakes, white-tailed sea eagles and more from one of Seabourn’s zodiacs with one of the five members of the Seabourn Expedition team and then an open water journey, ending with a hike up to Nordkapp, The Top of the World.

Our (ad)Venture started out with a special 5:30 a.m. room service breakfast (typical of Seabourn it was the full menu with our table properly set!) and then meeting our 27 other guests (ranging in ages from early 40’s to at least late 70’s) and the four naturalists (one for each zodiac) in The Club for check-in, fitting us with inflatable (and very comfortable) life vests and a quick safety briefing.  Then it was off to the zodiacs!

The ship stopped briefly on its way to Honningsvag so that the zodiacs could be offloaded and then we could board.  Once the eight of us were onboard our naturalist, Luciano (“Luqui”) Bernacchi, and a crewmember (to later drive the empty zodiac back to the ship) made sure everyone knew how stable the Seabourn zodiac was and how to sit comfortably.  (Later in the cruise I was able to observe the zodiacs used by Le Ponant’s Le Boreal and Seabourn’s are of far higher quality, size and comfort).

We then headed off to an island filled with birds both on land and flying all about us.  In fact, at one point it looked like a cloud of puffins was approaching.


Our activities were, from time to time, monitored by the local authorities:  A seal or two. 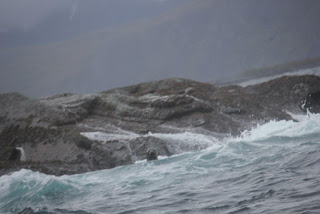 It was then an 8.5 mile run in the zodiacs to the base of Nordkapp.  While underway we looked for some additional wildlife, but it was more of a boat ride than a wildlife viewing period.  It was refreshing and a great way to get some perspective as to the size of the massive granite shorelines we have been viewing for days.  (Note that we actually passed the absolute further point north…which is two longitudinal minutes north of our destination, Nordkapp.  So only our group technically reached the Top of the World.)

We eventually arrived at the beautiful protected, but very rocky, shoreline, passing a herd of reindeer that were absolutely beautiful. 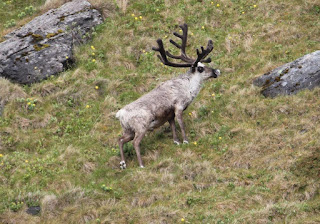 Our landing was not only met with the natural beauty, but low tide.  That meant we had to navigate across large, slippery but beautiful black rocks to get to terra firma.  While it was a bit of a challenge, and Diane was insistent on being “first and fastest”, most of the guests quite successfully took it “slow and steady”…with the naturalists assisting as needed.

Once on the lush green land it was time to start the hike up to Nordkapp.  It was pretty steep and very narrow; pretty much being nothing more than a reindeer path.  The wildflowers were exceptional, the trickling streams like music and the views spectacular; especially being up and out in front of the group. 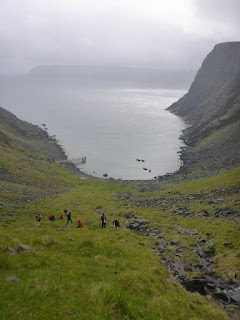 And then it happened:  Out of nowhere one of the big male reindeer came charging at me!  I didn’t know what to do as I was on this narrow path on this steep climb.  Diane tried to kick him away and then, all of a sudden, a polar bear came up from behind and chased off the attacker.  (I later found him, made reindeer sausage and Diane has his pelt as a souvenir.) OK, that didn’t happen, but I was amazed how many people believed me until I mentioned the polar bear.  The point is that our (ad)Venture by Seabourn was challenging, but Seabourn made sure we were always safe.

As we approached the summit the hike got steeper and my heart got pumping harder and my legs got a bit tired and then, true story, one gentleman from my zodiac that was seasick while birdwatching, etc. pushed past us and was the first to the top.  Imagine:  I felt sorry for him and then he took away my “win”.  (I was, however, grateful that Diane did not leave me and suffered the defeat along my side.)

Once to the top of the hike it was about a quarter mile to the visitor’s center.  Of course, I forgot to bring any money (focused on the birdwatching and hike), so no celebratory champagne.  I was, honestly, amazed that only one of the guests decided the hike would be too much for them.  All the others made it to the summit.  They took an hour to an hour and a half longer than we did, but there actually was no rush and the feeling of accomplishment will last far longer.

While at the visitor’s center no less than 10 buses of 50 people each arrived from the Caribbean Princess making my decision to enjoy both our small group (ad)Venture and cruising with Seabourn very, very, suite (er’ umm, “sweet”).  We saw the real natural beauty of the area, challenged ourselves, enjoyed the seas…and, let’s face it 10 people in a zodiac beats 50 people on a bus any day.

Our (very uncrowded) Seabourn bus eventually arrived and took us to Honningsvag, Norway through some pretty countryside on a windy road (a/k/a a great short nap was taken) we strolled through the small town that earlier in the day was reportedly overwhelmed by the 3,000+ Princess passengers.  We enjoyed our walk, tucking into a small art gallery and some shops.  But there were two things that caught my eye:  One was a nondescript concrete block building by the more commercial part of the pier and the other was an ice bar.

The former was filled with everything you can do with a reindeer pelt with three Norwegian women in full costume dress making hats and such.  Diane attempted to negotiate with one of the women, who spoke no English (or at least that was her position) and, while kind, was tough as nails as a negotiator.  I liked her.  And, to be honest, that is where the reindeer pelt was obtained.  (The sausage was purchased in Flam, Norway.)

The Arctic Ice Bar was about as touristic a money-maker as possible.   At the back of a well-stocked and pricey souvenir shop was an “ice bar” and sometimes you have to take a deep breath and do the tourist thing.  For about $20 you walk in and they place a silvery poncho over you…and your jacket…and give you two non-alcoholic drinks (a/k/a sugar water of different flavors poured into ice shot glasses).  While Norway severely restricts alcohol purchases this is ridiculous.  Anyway, while you are in the room lined in ice there are ice bars, ice tables with seating (on reindeer skins), an igloo you can crawl inside and a dog sled you can pose in. 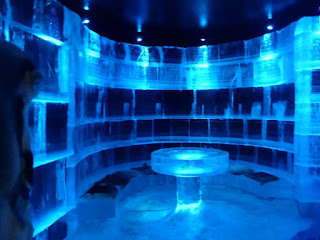 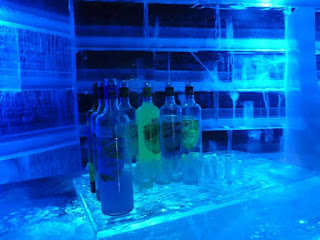 Fifteen minutes is more than enough time for this novelty.