Sometimes jetlag is a good thing and today that was most definitely
the case.  I was sleeping quite comfortably in my bed on the Silversea Silver Shadow with my new buckwheat pillow when my wife (the one with the jetlag) woke me up at 5:30 a.m. with a “You have to see this!”
She was right.  The sun was just up, and peeking through the clouds, the Inside Passage water was like a mirror, and it was simply breathtaking. Wisps of clouds, mist, jumping porpoises, a yellow tug boat, a snow-covered mountain top, forests with trees having ten shades of green…and quiet. 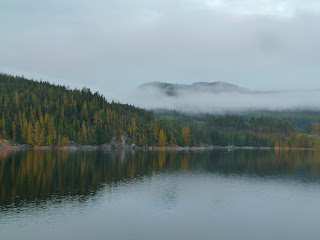 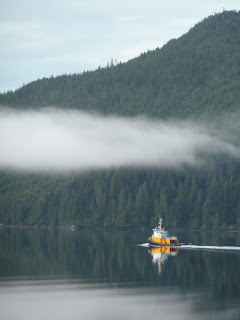 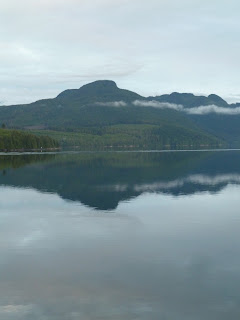 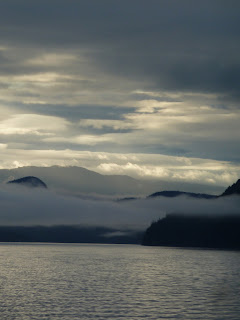 By 7:00 a.m. I was ready for a bit of breakfast, but La Terrazza didn’t open until 7:30 a.m. (This is a whole new time period for me while on a cruise!)  So I decided to walk the decks and enjoy the view.  I ran into a new client of mine (he found me after he had booked this cruise) and recognized me.  Unfortunately, he was into doing some fast walking laps around the ship, so I went along…unable to drink my coffee and dying for another sip. After his mile was up we headed to La Terrazza for breakfast…my wife now soundly back asleep.
There was a nice selection of smoked salmon, pickled herrings, cured meats, fruits and various hot dishes.  Being an older ship the display was just OK, but the content is what matters.  (One curious thing missing:  bagels.)  We had a very nicely set table, with a great view, proper linens and china.  A waiter asked me for any specially prepared eggs, so I ordered two poached eggs.  They were done to perfection.  Service was very good until I didn’t want any more coffee.  Then my conversation was interrupted four times by four different people asking me if I wanted more coffee.  Not a big issues, but more of an observation.
After tending to some work we attended the Food & Wine Pairing Talk with the Executive Chef Janine Fourie and the Head Sommelier Mathieu.  Even though it was set up as if it was also a cooking demonstration it was truly a wine pairing talk.  Mathieu was quite informative, though I personally would not have made the same pairings.  (That is, of course, what makes pairing food and wine fun and interesting.)  The scallop with green peas was excellent as was the Thai crab and pickled ginger ravioli. 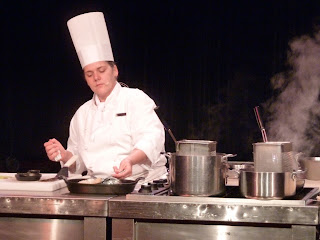 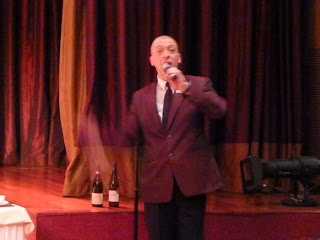 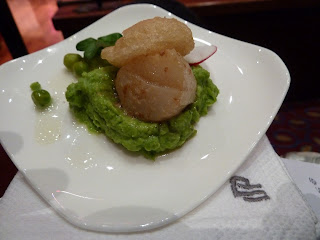 Our appetites whetted we headed shortly thereafter to La Terrazza for lunch.  Over the protests of my wife and the staff’s concern that it would be too cool, we dined al fresco.  Again:  Great idea! As I dined on bouillabaisse, with excellent service I might add, we watched whale spout after whale spout with the sun breaking though.
Since we were up so early it was time for a nap…until the phone rang at 4:00 p.m.  But that was a good excuse to get up.  I took a walk around and saw a very popular High Tea service in the Panorama Lounge.  I opted for a coffee and a comfortable chair on deck overlooking the stern where I again saw whale spouts and a few breaking the water, but no real breaching.
Then it was time to try the whirlpool.  But before I got back to my suite I ran into a young woman who, I believe, works the front desk. She was just standing outside looking out to sea.  We started to chat and found out she was a newbie, having been onboard only about two months.  She was absolutely charming talking about her trials and tribulations of a life at sea, her excitement for all of the travel, and such.  It added a bit of that personal touch that makes you feel you are not just on any cruise.  This was the first time staff on this ship, other than our butler, has taken the time to make it “personal”.  It matters!
Now to the whirlpool. I must admit that I am not a fan of having my soak in the middle of the pool deck, but with grey skies and it being later afternoon it was not like an audience was watching me.  The bar attendant promptly arrived and asked me if I wanted a drink; I opted for a glass of champagne as it sort of is a tradition of mine.
It was then back to the suite to get ready for dinner.  We were invited to dine with Captain Alessandro Zanello and his charming wife in La Terrazza.  Tonight was Formal Optional.  We opted for black tie and gown and felt completely appropriate.  Even though Silversea downplayed the formality of the evening before we left for this cruise, clearly there was a large number of guests that enjoyed the formality.  We had a wonderful evening with our dinner companions chatting about everything from the differences between the Silversea ships to possible names for the Captain and his wife’s anticipated baby.
I want to tell you that the food was great, but other than the pasta – which I really enjoyed – it was fine (no complaints), but nothing that got me excited. Also, and I say this as a very seasoned international traveler, I am having a bit of difficulty communicating with my servers.  Sometimes they speak too quickly for me and sometimes they don’t understand what I am saying.
Our dinner lingered a bit longer than anticipated (a good thing), so the evening’s entertainment had started long before we finished.  While it clearly was popular, it was ABBA, so there was no way this rock ‘n roller was going to check it out.  So after thanking our wonderful hosts, we retired to our suite for a nightcap on the balcony.
After today I am quite confident that if you are interested in taking a luxury Alaska cruise the Silversea experience is one that gives you plenty of quiet upscale space to enjoy your surroundings while not being surrounded and many of the touches you expect on a luxury cruise.  (Tomorrow I am going to try those scones at High Tea!)