Today was our first port call on our Silversea Silver Shadow cruise and the weatherman was, fortunately, wrong…again.  We had a good bit of sun and only a slight sprinkle of rain. This was a good thing as we decided on the Rainforest Sanctuary Walk and doing that in the rain would not have been much fun.
We sailed into Ketchikan, Alaska at 7:00 a.m. and, for a good part of the day, we were the only cruise ship in town (later to be joined by the Oceania Regatta, Norwegian Sun and a Disney ship).  It allowed us to enjoy our arrival in a quieter, more exclusive, manner…fitting for a Silversea cruise.
After supervising the Silver Shadow’s docking, I returned to our suite opting today for a room service breakfast before our 9:00 a.m. departure for our tour.  Yogesh arrived promptly at 8:00 a.m. and properly set our table with linen and china, poured my coffee and prepared my cereal (rather than leaving it in the box)…very civilized.
It was then off to our nature walk.  Here is where a Silversea experience is superior to those of the other players in Alaska, including Regent Seven Seas.  It wound up that there were only four people on our tour, so we had a very personal experience.  It was not 30+ people on an allegedly “free” Regent tour or cancelled due to a lack of participants.  This is a very nice touch. 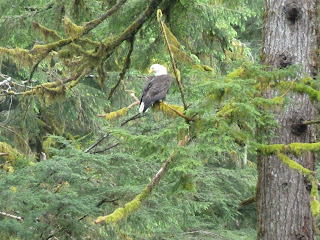 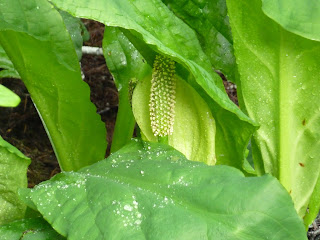 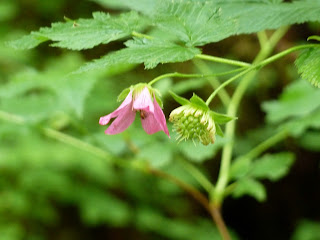 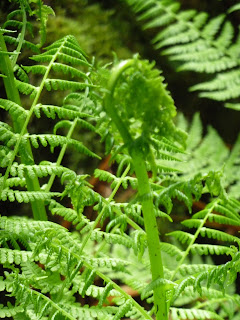 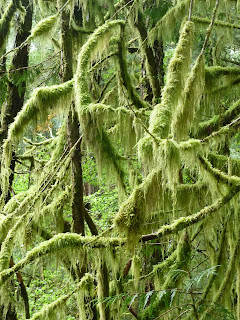 The walk was beautiful and our guide was knowledgeable and friendly (though I could tell when a “canned” joke was going to be coming…such as seeing bear scat and being told, “Now you know that a bear does sh*%* in the woods!”).  While we did see bear scat and paw prints, alas we did not see any bears or other wildlife other than a Pacific wren, some swallows and a couple of bald eagles.  The vegetation was beautiful and, for me, well worth the one mile stroll on well-made paths and boardwalks. 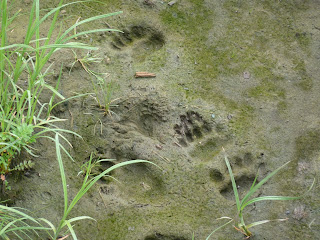 During my walk I went to put on my sunglasses and found that my butler had cleaned my sunglasses and wrapped them in a Silversea microfiber cloth.  It, like coming back to my suite and finding my two pairs of dress shoes polished and wrapped, was a very nice touch.  (I do have to say that there is also a bit of an uncomfortable feeling of someone going through my things.  But once you know this is the Silversea way of doing things, you should lose that.)
After a more touristic walk through a reindeer petty coral, a “show” raptor rescue center (composed of a single bald eagle and a single owl), 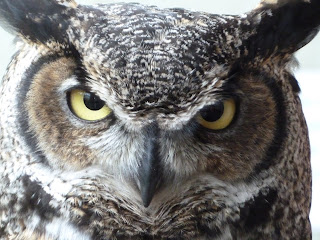 partially restored sawmill and a small “show” woodcarver’s shop we were directed to the obligatory souvenir shop before being driven back to the ship.
We then took a stroll into town and had a nice lunch of chowder, oysters, cod and halibut with local beer at Annabelle’s Keg and Chowder House.  It was recommended by the van driver as being the least touristic restaurant in Ketchikan.  It was, but did have touristic prices.  It was then back to the ship for a rest…being greeted by a Welcome Home note drawn on one of our suite mirrors…the posting of an article, checking emails. 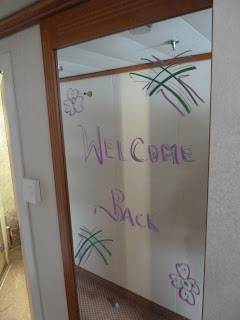 Then, for me, a walk about the deck followed by a tour of the galley with Executive Chef Janine Fourie, a jovial and enthusiastic soul. (Surprisingly, there were only four people who took this tour.) 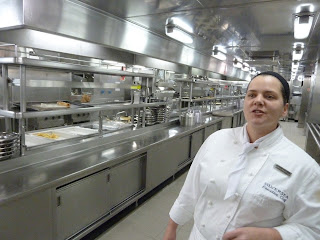 It was interesting to listen to the different approaches to ordering, preparation, food management and the like.  I am glad I went, but do note that if you were looking for a bit of a show with some creative canapés, this is not what is provided.  A quarter glass of champagne greeted you as you entered and that was it.  Possibly it was because of the lack of interest, but it was the least impressive of any ship galley tour I have been on.  (Clearly this is a bit of nitpicking, and it wouldn’t change the cruise I would take or recommend.)
We dined by ourselves in La Terrazza and both the scenery and our waiter, Ary, outshined the food. It is great to see that the wait staff is warming up and there is more interaction so that part of my La Terrazza experience has been excellent.  The cuisine, however, has been a bit of hit or miss; nothing was terrible, but nothing was memorable…except the tiramisu (which I normally don’t like) which was excellent.
After dinner and a cigar in the Connoisseur’s Club, we sat in on the last few minutes of the show. I must say, as someone who is not a fan of shipboard entertainment, these guys and girls can sing.  It was truly enjoyable.
The next morning we entered Tracy Arm with, again surprisingly, brilliant blue skies and breathtaking scenery. 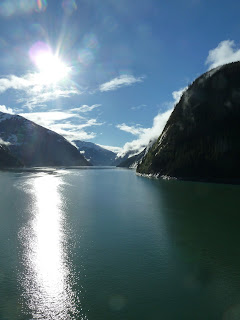 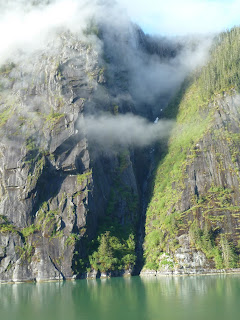 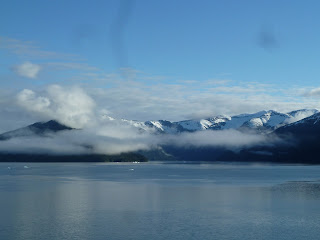 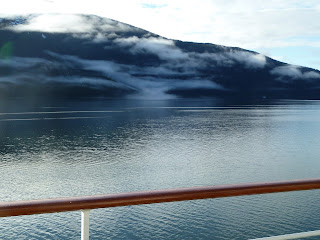 We opted for an enjoyable breakfast in La Terrazza.  I do not live for food alone and the food was fine (there even were bagels today), but the presentation needs to be spiffed up a bit.
A lazy morning as we sailed into Juneau found us right back in La Terrazza for lunch.  Ary saw us, guided us and made it clear he “owned” us for lunch.  I truly appreciated that level of service.  I was not hungry, so I thought I would order a slice of one of the pizzas on the menu, but was told I had to order an entire personal pie.  OK. Then my wife told me, “You shouldn’t have ordered the pizza because there is paella.”  OK, I’ll have a little paella…just for research purposes.  Then I walk into the buffet and see a line, so I ask what the line is for and am told “Roast Duck”.  OK, I’ll have a little roast duck, a little paella and a little bit of the pizza.
As I ponder my dilemma I hear, “Hello Mr. G and Mrs. G!”  It was a waiter that used to work on Seabourn, but left a couple of years ago. The stylistic difference between he and most of the Silversea staff became readily apparent.  He asked questions, offered opinions and “got personal” instantaneously. If service style matters to you, this confirmed to me that there is a difference.  It is not that one is better than the other (chocolate vs. vanilla), but you need to know there is a difference.
After a very tasty lunch (save, for a second time the pasta station which had below par pasta as it clearly has been pre-cooked and then sort of warmed up with the sauce) and excellent service we headed out in Juneau after our 1:00 p.m. arrival.  The Red Dog Saloon was just steps away, but there was a line.  So we took a walk through town, past the Celebrity Millennium and the Oceania Regatta, but not quite as far as Royal Caribbean’s Rhapsody of the Sea and found ourselves being drawn into going whale watching. I negotiated a good deal, so we said “Why not?”  While waiting for our 3:00 p.m. departure we headed back to The Red Dog Saloon where Big Jack poured us an Alaskan Amber and Summer Ale as we enjoyed the tacky old time ambience and hokey sing-a-long. 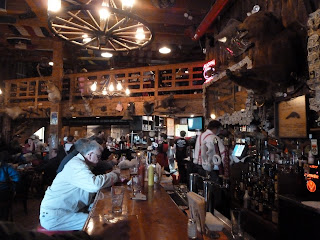 As we walked over to the pickup point for our whale watching with Dolphin Tours and its twin jet drive high speed boat, the skies brightened and the temperatures warmed.  By the time we got to the boat the day was gorgeous. We were also blessed with some great whale watching; especially a mother and her calf coming right near our boat. And the staff was really nice too. 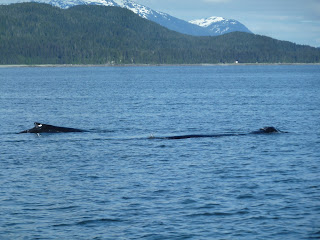 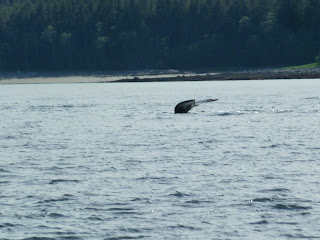 Our spur of the moment decision was a good one.
Tonight we dine at Le Champagne…but as my wife went to get ready she was greeted by a rose petaled bubble bath.  A very nice touch.