Our second day on the Regent Seven Seas Voyager was a day in Florence, Italy with my having arranged for a private art history guide to take my daughter through the Uffizi Gallery.  It was also my first opportunity to experience the “free” tour options that Regent includes with your cruise fare.
During online Registration you are given the opportunity to select from a wide variety of included tours.  The descriptions seem adequate.  For Florence we chose “Florence on Your Own” as we had our guide.  From an economic standpoint, a private car transfer with a private guide for the day would run approximately $600 – $1,000 for two people dependent mostly on the tour.  This, however, is just for a group transfer.
We arrived in the Constellation Theater, where the tours are staged, and turned in our tour tickets (which are provided upon Embarkation in your suite) and receive a bus number.   At the appropriate time you are escorted to the bus.   I was pleasantly surprised that our large bus only had 23 people on it along with a guide that gave us plenty of information, but did not overwhelm us with dates.
Our guide did give us some “recommended” shops and said to be sure that we told them we were from the Seven Seas Voyager in order to get better pricing.  Really?  What it was actually for is so that she gets her “commission” from the shops for sending the tourists there…but she was quite good at her pitch.  After being escorted to the meeting point and the time to be there reinforced, we met our private guide.
It was also of note that water is supplied at the gangway, but if you wanted water on the bus it cost 1€. Seriously?
Patrizia, Devin and my privately arranged guide, was a wealth of knowledge and with Devin being a stellar student at Pratt Institute I spent the next four hours somewhat overwhelmed at the intricate weaving of influences and techniques from this artist to that artist, but it was certainly impressive…and head-spinning.  As Devin said with that college attitude we all know and love, “This is what you get for $62,000 a year!”  (Thank goodness for scholarships!!!) 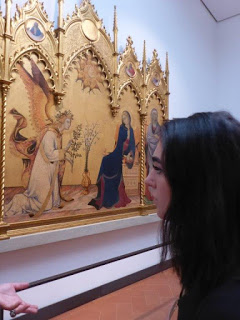 After our tour, it was my time.  Time to find a great place to eat.  Both the tour guide and Patrizia provided me with the names of many restaurants, both touristic and local, but in the end with had tired legs and I needed a drink sooner than later, so I did what I usually do:  Wander until I go “That’s the place!”. 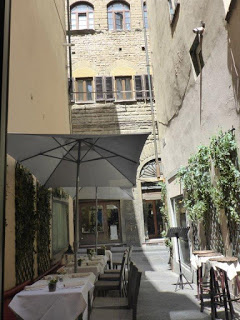 The place was dei Frescobaldi; which was tucked into a small alley with four tables outside and a quaint area inside (and a larger dining room in the back).  As it was nearly 100 degrees outside we opted for the quaint area and settled into a tiny table by the door for a wonderful lunch with a nice bottle of prosecco. 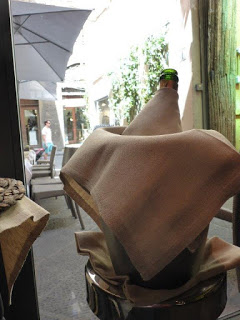 Devin started with grilled octopus with artichoke puree and I had spaghetti with fresh anchovies. 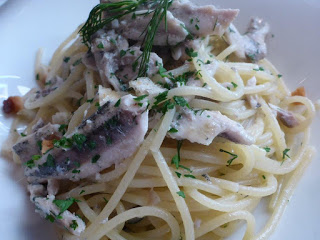 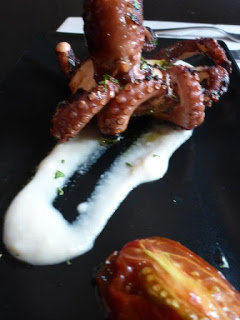 Next up for me was stuffed quail while Devin had truffled pasta. 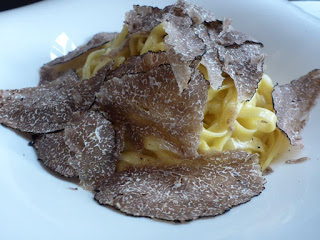 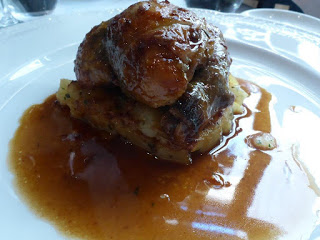 We finished with their version of tiramisu. I’m generally not a tiramisu fan, but what the heck! 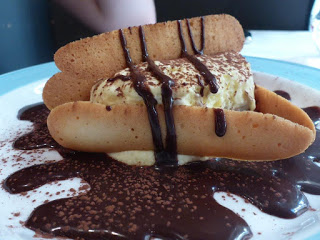 Well, I thought we finished.  I went to the men’s room and somehow the guy behind the bar was chatting with Devin and two glasses of dessert wine appeared.  A Dad’s worst nightmare:  Turn your back for a second and…
After lunch we wandered around in the extreme heat before heading back to the bus for our ride back to the ship.
After a short nap it was time to eat again!  This time we dined at Prime 7; the Regent Seven Seas steakhouse.  We started with a crab cake and tuna tartare, both of which were quite good.  (I, personally, am a fan of less mayonaisse in my crab cake, but that is just me.)

This followed by a curious Caesar salad that really was nothing other than some Romaine lettuce with deconstructed ingredients.  Weird.

This might be good for an informal gathering or a fun night while cruising Alaska, but…And no finger bowl or warm cloth was provided afterwards. I am sure for many it is a luxury experience, but for me it just didn’t have the polish I was hoping for.

To me, and I think you are seeing a consistency here, Regent Seven Seas is focused more on individual ingredients than providing a true culinary experience,

Speaking of individual ingredients, we thought we should try asparagus again as a side (along with French fries and a baked potato).  The asparagus was served in a longer dish, but again was wilted and overcooked.  I don’t get it, and will give up on what should be simple.  Baffling.

The next morning was our second “free” tour; an early morning wine tasting in Ajaccio, Corsica.  Why not?  It was a short event of less than two hours, so it would not interfere with the rest of our day.  Pricing-wise a short tour such as this would probably cost about $50 a person ($100 total for two).
Regent Seven Seas did a great job with this tour, as the wine shop, Le Chemin des Vignobles, was beautiful, the people very nice and engaged and the wines were quite good…especially for such a tour. 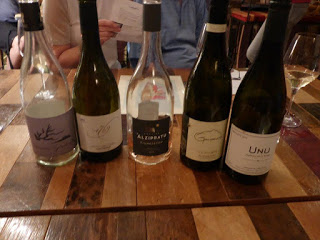 We tasted five wines, most of which were better than I expected though in a curious (to me) order.  I asked a number of questions and they were enthusiastically answered.  I could not have asked for more.  However, as I wandered about the wine shop afterwards, the host invited me into another area which was another, smaller, private tasting room that was literally cut out of two old concrete vats.  Very cool…and charming that she wanted to show me them.
Devin and I decided that after the wine tasting we would gather picnic supplies at the local market and then head to the beach.  I purchased a bottle of Corsican rose (Clos Venturi) and then headed to the bus. 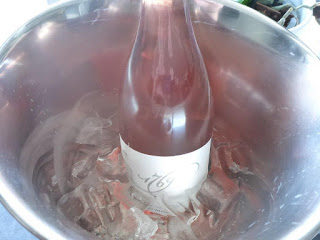 After the bus dropped us off we walked just a couple of minutes to a charming market and purchased some local cheese (Tomme), ham, olives and baguette. 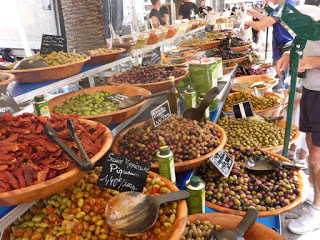 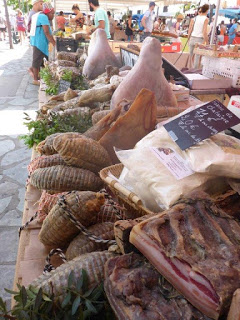 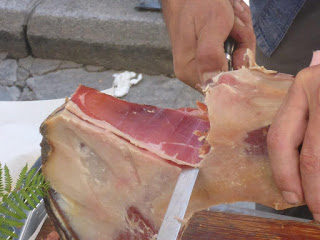 We were ready, but the heat just has been oppressive, so we opted to picnic in our suite and then head to the beach.  However, when boarding I got in trouble.  Apparently Regent Seven Seas Cruises does not allow any local food to be brought onboard the ship; something I have not experienced on Seabourn or Silversea.  (Can you imagine a Goldring Travel Culinary & Cultural Cruise without local fare? Yikes!).  After nicely pleading not to take our lunch along with a promise to never do it again, I was allowed to bring our feast onboard. Whew. 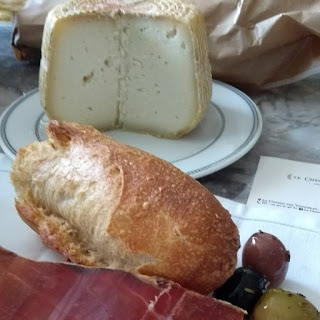 Devin and I then enjoyed our local lunch after some early morning wine drinking.  And then we made an executive decision:  It was too hot for the beach, but a nap sounded really good.  And it was:  A four hour nap. I can’t remember the last time I did that!
After another somewhat disappointing dinner; pasta just isn’t an option, but I will try it in Sette Mari (the Italian restaurant that La Veranda converts to in the evenings) we thought we would check out the show which consisted of the Regent production team, a British comedian and then Ray Solice, the cruise director, famous for decades for his ventriloquism and marionettes.  We were late due to dinner, sat through the comedian (who was decent) and then had to leave.  I tried.  I really did.  These shows just are not my thing.  But I did hear a number of people expressing their enjoyment with the show.
So then it was off to the Connoisseur Club for a cigar and a whisky.  I truly enjoy having a cigar lounge on a ship as it gives those who do enjoy this vice a place to go without feeling like a pariah. It was frustrating, however, that there was not a dedicated person stationed in the Club to serve drinks or purchase cigars.  One had to walk across the hall to the Voyager Lounge to obtain service. (One other niggle:  When removing an ashtray it should be covered with something so that the ash doesn’t fly onto one’s clothes.  That didn’t happen…so the ash flying did.)
It was then time to call it an evening…and one last miss:  Each night two chocolates are placed on the bed.  The chocolates have a white coating which means either it was improperly stored, got hot or were kept in a high moisture environment.  It won’t hurt you, but it shouldn’t be provided on a luxury line.  The little things that matter.