Seabourn Sojourn in Alaska – Part I (Getting There)

My Alaska cruise on the Seabourn Sojourn will be my third trip visiting the Inside Passage.  I previously sailed on the Regent Seven Seas Mariner in 2005 and then on the Silversea Silver Shadow in 2012.  Having the ability to compare how the three deliver their luxury experience in Alaska should be interested; noting that because of the 13 year span, certain things will have changed both onboard and on land.
I am sailing in a Penthouse Spa Suite (1091) with its magnificent views over the ship’s wash; which will most certainly be a bonus on this cruise from Vancouver to Seward spanning twelve days.  If you would like to know more about these unique and fantastic suites, please read my article:  Seabourn Quest’s Penthouse Spa Suites – Are They Really That Good? Yes!  (There have been a few tweaks and upgrades, such as a tea kettle for your floral teas, a cushioned seat at the desk and “male” Molton Brown products being provided.)
To this I note that the distance is covered by most cruise lines in seven day, but with a twelve day itinerary, Seabourn’s ability to go places most other cruise ships cannot combined with its Seabourn Ventures program with scientists, naturalists and experiential opportunities should make this a better overall experience.
My trip started with a visit to the Escape Lounge in Reno, Nevada before my Reno to Seattle and then Seattle to Vancouver flights.  Because my flights always seem to be first thing in the morning, I settled into the lounge about 5:30 a.m.  After my drink arrived and I had a bit of a breakfast, an unordered shot of vodka appeared with the hostess giving me a sly grin.  Doing a shot at 5:55 a.m. was not part of my plan, but I said to myself, “Why not?”.
My first flight on Alaska Airlines was delayed due to traffic control issues in Seattle.  Making my connection was going to be very, very, tight.  (I am glad I upgraded to premium economy so that I could be near the front of the aircraft…just in case.)  Arriving in Seattle seemed to take forever, including an extremely long taxiing to the gate and then having to run to…you guessed it…the last gate with not a minute to spare.  Running through the airport, dodging people left and right, I could see Gate C17, but my path was crossed first by an electric cart and then a man in a wheelchair.  Seriously?  It was like a comedy.  Arriving at the Gate I was told that the doors were closed, BUT because of a ground hold Alaska Airlines would put the jetway back and let me (and a few others) board.  Whew!  (United Airlines: Are you listening?)
We arrived in Vancouver to chaos because several flights, including international, arrived at the same time so there are huge lines.  I assume this was related to the reason for the ground-hold in Seattle: Traffic controller issues.  Regardless, I was happy to be in line because the alternative (sitting in Seattle trying to find an alternative flight) would have been worse.   And then…
As we were standing in line the hundreds of other people just doing what you do, a woman that just oozed she was a Kansas bible-thumper ducked under the rope barrier and looked at me with a big smile and then waved to her friend that she should come too; as if all was as it should be.  Well, too bad for her that she did this right in front of me.  After I unhooked the rope from her backpack-fastened neckroll, I “kindly” advised that the line was “all the way back there”.  As she turned to leave, not saying a word, her backpack-fastened neckroll hooked onto the other rope barrier.  Amazing.
But what was more amazing?  After finally getting through passport control and over to baggage claim: My luggage was there!  (United Airlines: Are you listening?)
I decided not to spend a fortune on a hotel in Vancouver but opt for one that was just OK but right near the waterfront…and not the waterfront by the cruise terminal, but where the locals hang out on the other side of town.  With our room not ready until late afternoon, I was guided to the Yaletown area of Vancouver but as I started walking I decided it wasn’t by the water…which is why I chose the location.  A quick Google search and I found Ancora, a waterfront restaurant specializing in Canadian seafood, but with a Peruvian chef who also has a Japanese influence (which is typical of modern Peruvian culture).  Perfect!
Not wanting to miss anything I ordered an incredible seafood platter that rather speaks for itself, which I paired with a Summerhill sparkling rose; perfect for a late spring lunch.
For dessert there was a wonderful charcuterie plate.

After a bit of work and a nap it was, well, time for dinner.  Once again Vancouver and the location of my rather ordinary hotel did not disappoint.  This time I did find my way to Yaletown after a 15 minute walk where I stumbled upon a Lebanese restaurant called Nuba.  A quick look at the beautifully presented dishes and a crowded restaurant I knew I was in.  A nice al fresco table, perfect for people watching, filled with the expected dishes and a bottle of Lebanese wine I was set for the next couple of hours…along with the Millennials that otherwise were the sole diners there.

As the sun rose I knew it was time to get into Seabourn cruise mode, so I did my necessary pre-cruise paperwork (as I am the Ensemble Travel Group host for this cruise), watched some of the World Cup soccer and chilled out with my partial waterview.  I would note that Vancouver’s architecture hasn’t exactly left me inspired.  I could find hardly a building that made me go “That’s nice” no less “Wow”.   (The business area, where the office buildings are located, is a bit better, for sure.)
I headed to the cruise terminal to drop off my bags before meeting up with some of my clients/friends that had just disembarked the Seabourn Sojourn having sailed from Kobe, Japan.  We had a lovely chat over three dozen oysters paired with prosecco.  Importantly I learned that a splash of limoncello and a bit of black pepper on an oyster is pretty amazing. 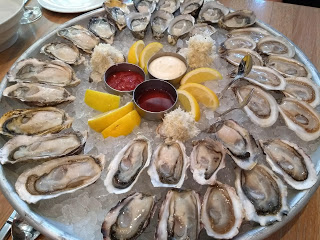 Time to head over to the Seabourn Sojourn and, one would think, an easy embarkation.  Nope.  Someone put their passport in her luggage.  Seabourn was great in eventually finding the luggage and my embarkation was able to proceed.  And then…more lines: US Customs and Immigration clears you into the US in Vancouver combining those boarding the Seabourn Sojourn, the Holland America Nieuw Amsterdam and the Emerald Princess.  Ugh.
And, with that behind: I boarded the Seabourn Sojourn.