The Silversea Silver Discoverer departed the port city of Belawan, Indonesia for the northern tip of North Sumatra and the city of Banda Aceh, Indonesia which was devastated by the tsunami on December 26, 2004; effectively destroying most of it and claiming an estimate 250,000 lives.  Our short time in Banda Aceh was eye-opening, but not for the reason you might think.
Before I talk about Banda Aceh, I want to briefly discuss what is meant by “Expedition” cruising.  The definition is not so dissimilar to how one defines “Luxury”, to wit:  It means something different to everyone.  And, as this Silversea Expedition cruise is showing, “expedition” does not mean you must don hiking boots, a backpack and anti-malaria tablets (though they might be worthwhile to have on some trips!). It can be more typical cruise tours, just in areas where tourism is just developing and where exposure is very limited.
Alas, “Expedition Cruising”, regardless of your definition, requires a mind-set more than anything else.  So one thing is certain, at least to my mind:  If you are focused on a specific event or a strict itinerary or for everything to go perfectly as planned, expedition cruising is not for you.
And on this cruise there are a number of guests wondering, “Why am I here?  This is not a Silversea cruise. This is not organized as it should be!”
Well, I think that question is better asked of one’s travel agent than of Silversea Expeditions because it is the travel agent’s responsibility not to merely take a booking (and a commission), but to assure your client’s expectations are met or that your client choose an alternative cruise.  (Just in case some of you think I go on these cruises as a “perk”, the reality is it is work so that I can properly advise my clients and readers.  OK, it isn’t terrible work, but it is work.)
So far on this cruise
–       The ship was a day late (extra time to explore Singapore…or my trip is already ruined and I want a partial refund)
–       The time in the orangutan reserve was somewhat shortened (I got to observe orangutans – very cool – or I didn’t have the opportunity to see monkeys and it was a bit staged)
–       The port of Banda Aceh was eliminated and then it wasn’t (creative planning vs. Make up your mind; it isn’t that difficult)
–       Weh Island was eliminated and now is back on the itinerary (my spa appointment now conflicts)
–       Our clearance upon arrival in Myanmar may take four or more hours so we may not be able to see the port town of Kawthoung, and Hastings Island has been eliminated.  (I wonder what the tension is about vs. Shouldn’t this have been anticipated?)
As I understand it, this cruise is the first international ship (other than some local Thai diving boats) to visit this area.  I think it is pretty cool, while others are concerned that their planned diving and snorkeling holiday may be in jeopardy. Both are legitimate but one causes excitement and the other stresses.
Now, with this premise, it is time to talk about our time in Banda Aceh, Indonesia.  We arrived via zodiac into the port.   (Trust me it is very civilized tendering in the zodiacs and the Silver Discoverer is actually extremely well set up for even those with some limited mobility to easily embark and disembark the zodiacs.)  Three buses met us and took us to a previously floating diesel power plant (ship) that the tsunami moved approximately 3 kilometers inland.  The interesting thing to me was not this show of the power of the tsunami, but the politics of international aid…and how, unfortunately, it became clear that the focus of the survivors of the tsunami has been more about being victims, and exploiting that, than the tremendous recovery of the area; now far better than it was pre-tsunami. 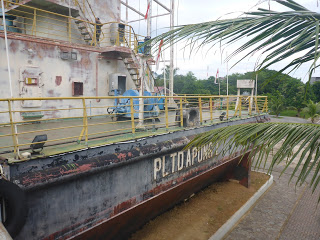 As I walked around the upper level of the PLTD Apung (which has had its diesel generators removed) was the large notations of support in Indonesian from Asian countries with attributes in US Dollars of the money they have donated, but the relegation of the United States to a very small side article without the notation (mentioning the very significant monetary donations in obscure reference, while hardly mentioning all of the immediate evacuation and medical relief – the first to respond from the US Subic Bay facilities – or the water, vehicular and other non-monetary relief provided). It does not mean that the assistance is not appreciated, but that politics makes it difficult to express it as Westerners might expect and feel appropriate. Interesting. 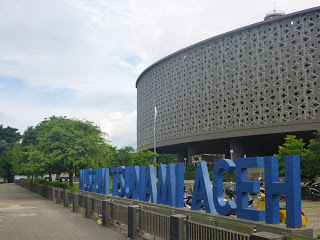 We then traveled to the Tsunami Museum; clearly a modern, well-designed, homage to the tsunami and its devastation, but with only a brief tribute (though architecturally very interesting) to the future, though only in concept.  I, personally, got more out of it than most because the guide that read the small writing at the PLTD Apung sought me out to explain the meaning of the various aspects of the museum (noting he was trying to assure the United States efforts were very much appreciated).
Silversea Expeditions should have explained the museums; preferably before we arrived.  Relying on local guides that rarely host Western visitors can be, and usually is, disappointing.  It is a recurring theme…and with the truly brilliant expedition staff onboard, putting a 10 minute presentation together for each of such things would be easy.
Being given more time than I needed to see the museum I wandered over to a large park across the street, as did some others from our ship.  While they just walked, I wandered.  I saw a line of food tents that were just getting set up for the day, scoped them out and then saw an old woman actually cooking and who seemed charming.

So with that I asked about getting some soup, which brought her husband over…and disappointment because I only had US and Singapore dollars.  Not to worry!  A second man came over and, apparently, told them that US$2 and SG$2 would be sufficient and he would change the currency for him.  (At least that was my guess as I was ushered to a plastic chair and table to await my soup after he took my money.)

The soup is called Basko and is a combination of pale colored beef balls, the broth they are cooked in, two types of noodles and vegetables.  There are a variety of condiments you can add to it, but I (of course) went with the spicy stuff!
It was quite tasty, but what was better was the old woman’s appreciation.  She even called her son over to have their photograph taken.  (It was nice to spend a few moments with some local people living their lives in Banda Aceh instead of just visiting their monuments.) 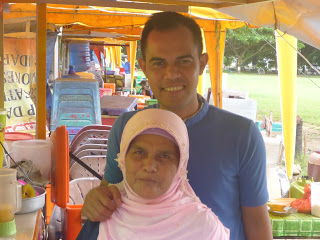 After returning to the bus (I was the last person, but was still early) we went to a cultural center where some of the local young women performed a pretty spectacular, beautiful and complex dance called Saman.  It involves numerous hand, arm and head gestures, some intertwined with the woman next to them, and rhythmic slapping and clapping.  This dance is supposed to symbolize the daily lives of the Gayo people. 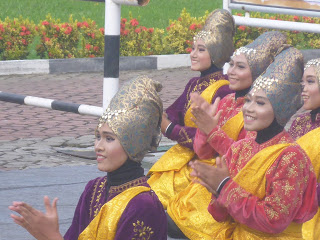 Again, I truly wish Silversea Expeditions (or at least the local guides) gave us more information about the dance before we arrived.
As we were returning to the ship, our local guide gave us a bit of a lecture about how the local people are victims and that we should keep sending money because we are better than they are and they want to improve and learn from us.  After 12 years, remembering that horrific day is important (and unforgettable), but celebrating the new Banda Aceh is equally – if not more – important.
I got the impression that this victimization to get international aid is more of a newly learned technique than actually part of the Banda Aceh culture. It gave me the feeling of some of the good intentions of NGOs (non-governmental organizations) have gone astray.
Back onboard, that evening I tried the Hot Rocks al fresco dining experience.  As much as I am not about wearing a bib and cooking my own dinner, I have to admit that the quality of my meat (I chose the ribeye steak) was excellent and it was an enjoyable alternative to the main restaurant.  A bonus was that it was the evening of the Super Moon!
The next day we were able to add Weh Island back into our itinerary.  Our experience was, again, more of that of a traditional cruise ship, but in an exotic location where you would never visit on a cruise ship…or frankly ever.  Our first stop was a local school in Sabang, which was absolutely delightful and the children so engaged…though basically no English was spoken.  (I kept thinking about was, with all their preparation, the children would have been more disappointed than we would have been if Weh Island wasn’t added back to our itinerary!)
What made this visit even more special was that the young girls performed another Saman dance.  I was truly amazed at how adept they were at these long, intricate, dances. 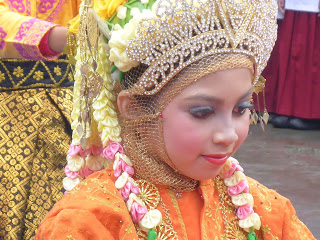 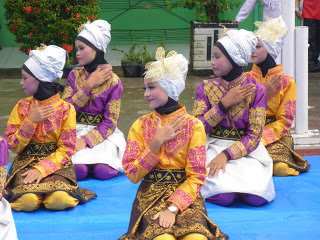 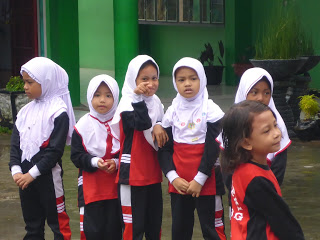 It made me wonder if those children that enjoyed my interactions would have still done so if they knew I was an American or, more so, if I was a Jew.  Unfortunately, I am quite confident of the answer.  The world – here and at home – needs to do better!
We then visited what I believe was another NGO project gone astray:  A Dutch Colonial Museum.  The museum was nice, but the guides had no idea how to use it or to explain anything about it (nor did the Silversea Expedition staff).  So it was a matter of walking in, around and then going, “Now what?  Where are our minivans?”  Eventually we wandered, without explanation, through what clearly was a former Dutch Colonial settlement, and found our minivans.
Again, I would note that the uniqueness of Western visitors creates an interesting dilemma:  They guides are not fluent in English (so they are a bit tentative), Westerner travelers are generally a bit more aggressive (which can be uncomfortable), but we are also their guests (so they do not want to offend).  This sort of results in a stalemate of polite, but inefficient guides and the frustration of the guests.  It was not terrible, and I focused on the “How cool is it we are here?!”, but there is room for improvement through pre-visit lectures.
We traveled to what I thought would be a very interesting geothermal area:  The Valley of Jaboi, about 30 minutes away.  It was OK, but if you have been to Iceland or to Rotarua in New Zealand it was disappointing.

Bringing us back to “What is an Expedition cruise?” what one needs to appreciate and embrace, if this is the right type of travel experience for you, is that it will, by definition, be a somewhat unpolished experience; a unique experience and, to a degree, part of the experiment of engaging in tourism where the concept is in its infancy.

But, to be sure, if you dare venture into questioning not only how, but why, things are presented in the way they are to you yet take the time to seek out and enjoy that old woman and her soup, dive in. (And, of course, enjoy the snorkeling too…if and when you get to it!)

If you would like more information or would like to book your Silversea or other exotic cruise, please give us a call: