Today was the Goldring Travel Special Food & Wine Event at the New England Aquarium.  It went off without a hitch and was, honestly, better than I had hoped for.

Goldring Travel’s clients were given access to the entire New England Aquarium to enjoy the penguins, huge central tank and all of the exhibits before and after private behind the scenes tours.  Some were lucky enough to watch a huge sea turtle being lifted by a specially rigged crane and then blood samples being taken. 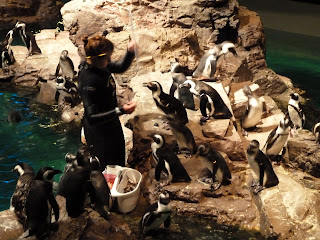 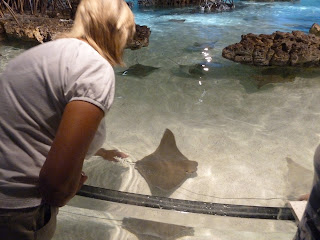 But then it was time for the Behind the Scenes Tours.  This was no faux experience, but rather one which provided a wealth of information from behind the exhibition tanks…with aquarists regularly walking in between the visitors.  The guides were a great mix of knowledge, enthusiasm and charm.  They explained how the aquarium gets its sea water right from Boston Harbor and showed the equipment in action that cleans and filters the water before sending it to the tanks and then recirculates it.  (It was a bit ironic that they discussed how protein skimmers create the same sort of turbulence that causes proteins to foam up from wind and skims the proteins away…thinking back to my “discussion” of that in Saguenay about that protein foam not being from the ship’s laundry.) 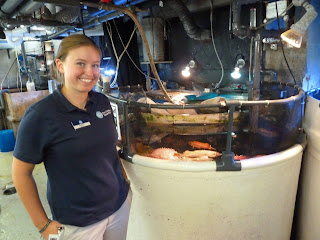 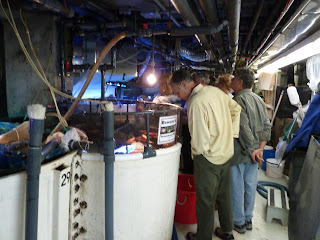 We were then shown a tank with various fish…and the tanks behind it with “backup fish” (Fish get sick too, but at the New England Aquarium they make sure you aren’t staring at identification signs looking for missing fish.)


Then it was to the Giant Octopus tank with its heavy cover required due to the octopus’s late night fishing exhibitions in the other tanks (I had a pet octopus, Herman, who did the same thing) and then the puzzles given to the octopus where it has to figure out how to get its food.  Then there was the crash of water from the anemone tank simulating surf with cute baby lump fish behind it.


Next were the lobsters!  A giant blue lobster. A calico lobster. 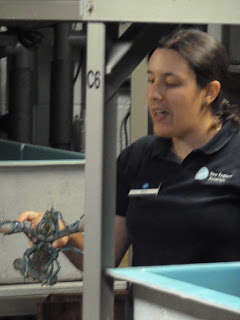 And, my favorite, a red and blue lobster…colored red on the right and blue on the left! 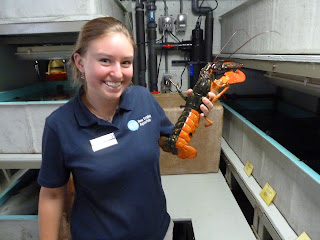 What many of the folks really enjoyed was then going back to the public areas of the New England Aquarium and looking anew at the exhibits.  Everyone agreed that they will never look at an aquarium the same way.

But now it was time to eat seafood!  What?  At an aquarium?  Let me not get ahead of myself.

The West Wing, with its black walls lined with tanks filled with jellyfish, was ringed with a Sustainable Seafood & Wine Experience.  It included: 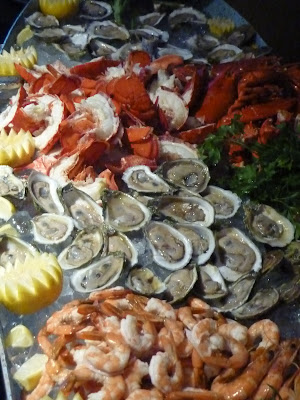 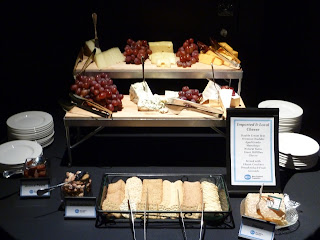 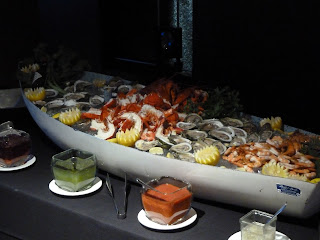 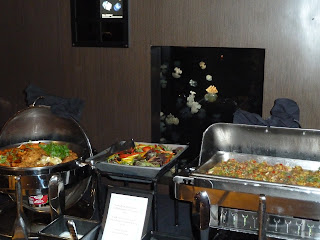 After a “Thank You” toast with a Lamberti Prosecco to all of my clients…something they well deserve!…it was time for an Oyster Shucking Lesson for the newest fan of oysters.  Under the supervision of the New England Aquarium’s Chef Tiger, a new talent was discovered. 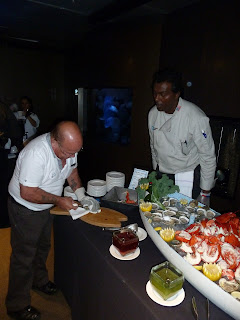 It was then time to enjoy all of the food with some great wines: Whitehaven Sauvignon Blanc (New Zealand) and Terrabianca Super Tuscan (Italy).

But then the real treat!  Elizabeth Fitzsimons, the New England Aquarium’s Outreach Coordinator for its Conservation Department’s Sustainable Seafood Program gave an informed, inspired, and fascinating interactive talk about sustainable seafood:  The Facts.  The Fallacies.  The Future.  (Those are my words.)

Elizabeth’s basic message was that by making smart use of our oceans’ bounties we can actually improve ourselves as well as our environment.  By eating seafood other than such popular items as salmon and shrimp, smartly regulating species so that they prosper such as lobsters and swordfish, avoiding highly pressured species like Chilean sea bass (actually it is not a sea bass, but a toothfish) and orange roughy, we can make a huge difference…while enjoying all sorts of seafood and flavors. 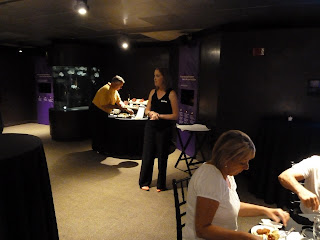 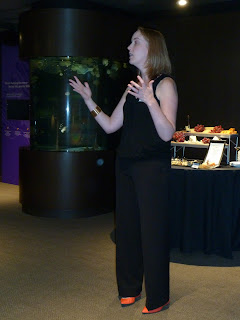 I love this stuff, but I didn’t know if this, no matter how tasty, might have been a bit too cerebral for an extended period.  It was, I am happy and proud to report, a huge success.  Elizabeth could have talked for two hours and still had the group mesmerized.

But all good things have to come to an end…and there was no better way to end the event than with incredibly good cupcakes! 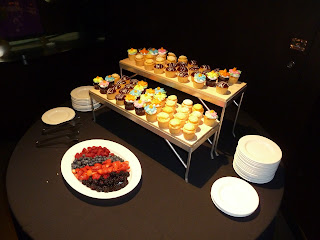 After a lovely late afternoon wandering Quincy Market, it was time to head back to the Seabourn Sojourn for a wind down period in…you guessed it:  the forward hot tub.  A wonderful dinner dining al fresco in the Colonnade brought a relaxing end to a super day.