The day after the 2014 Goldring Travel Food & Wine Tasting aboard AmaWaterways AmaCerto was a peaceful day visiting Melk, Austria and its Benedictine Abbey.  It was a pleasant, but I more enjoyed wandering the quaint village and strolling back to the ship.  The axiom ABC (Another Bloody Church) is starting to become uttered by more than a few passengers. 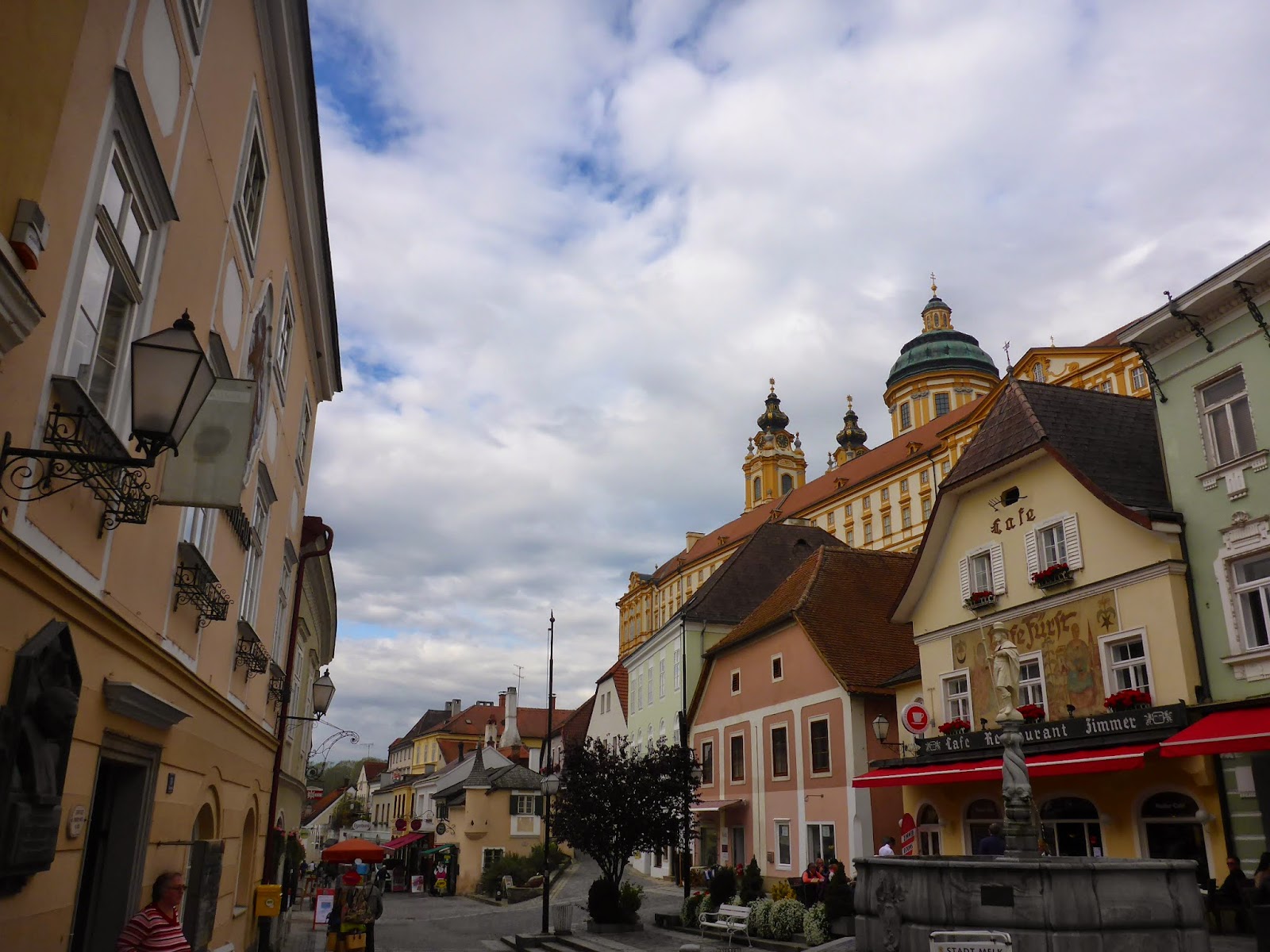 More enjoyable for me was finally being able to use the AmaCerto’s pool as we cruised through the Wachau Valley.  (As I was the only one in the pool, the swim up bar was only for show.)  Not a bad view at all! 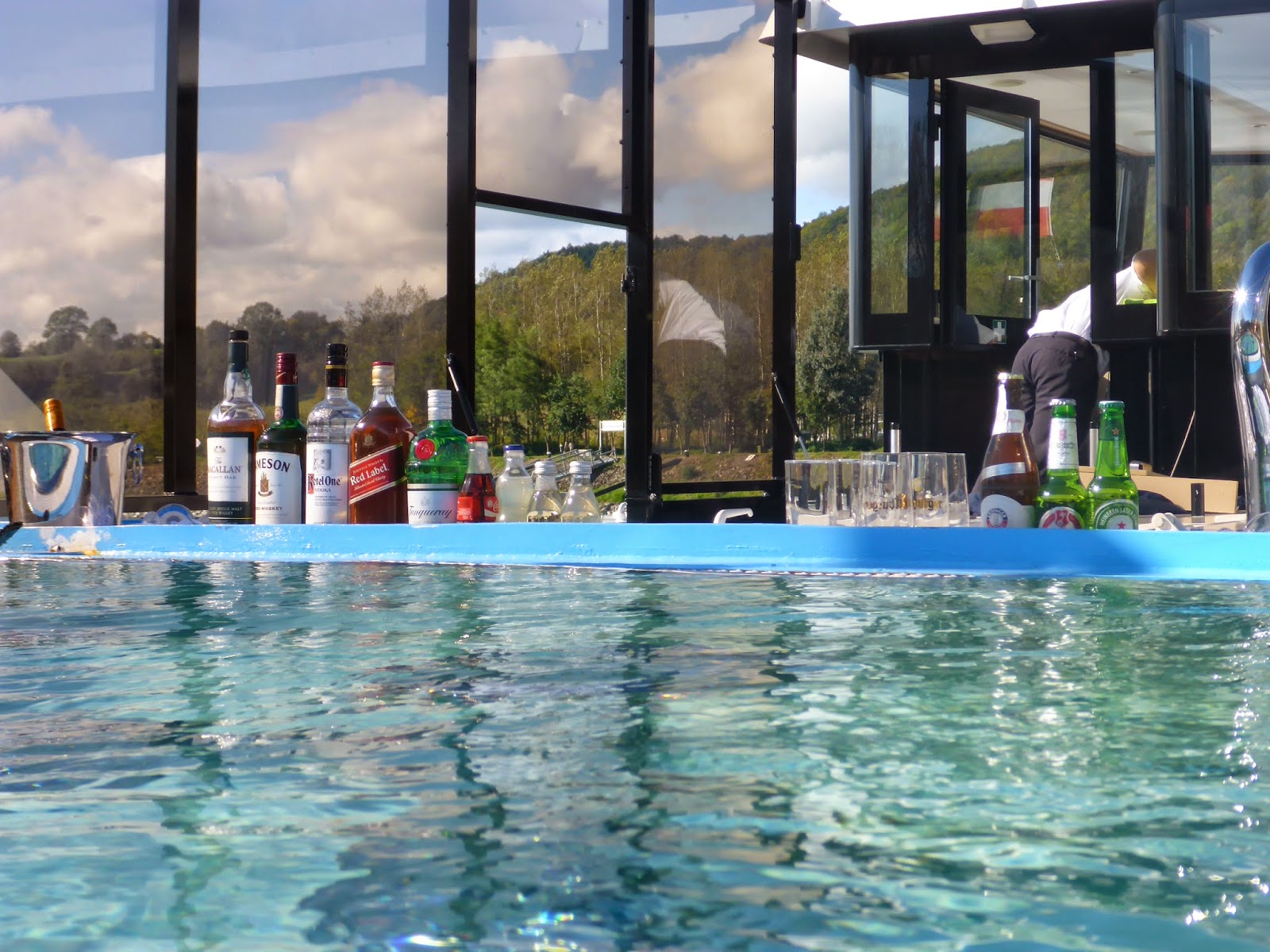 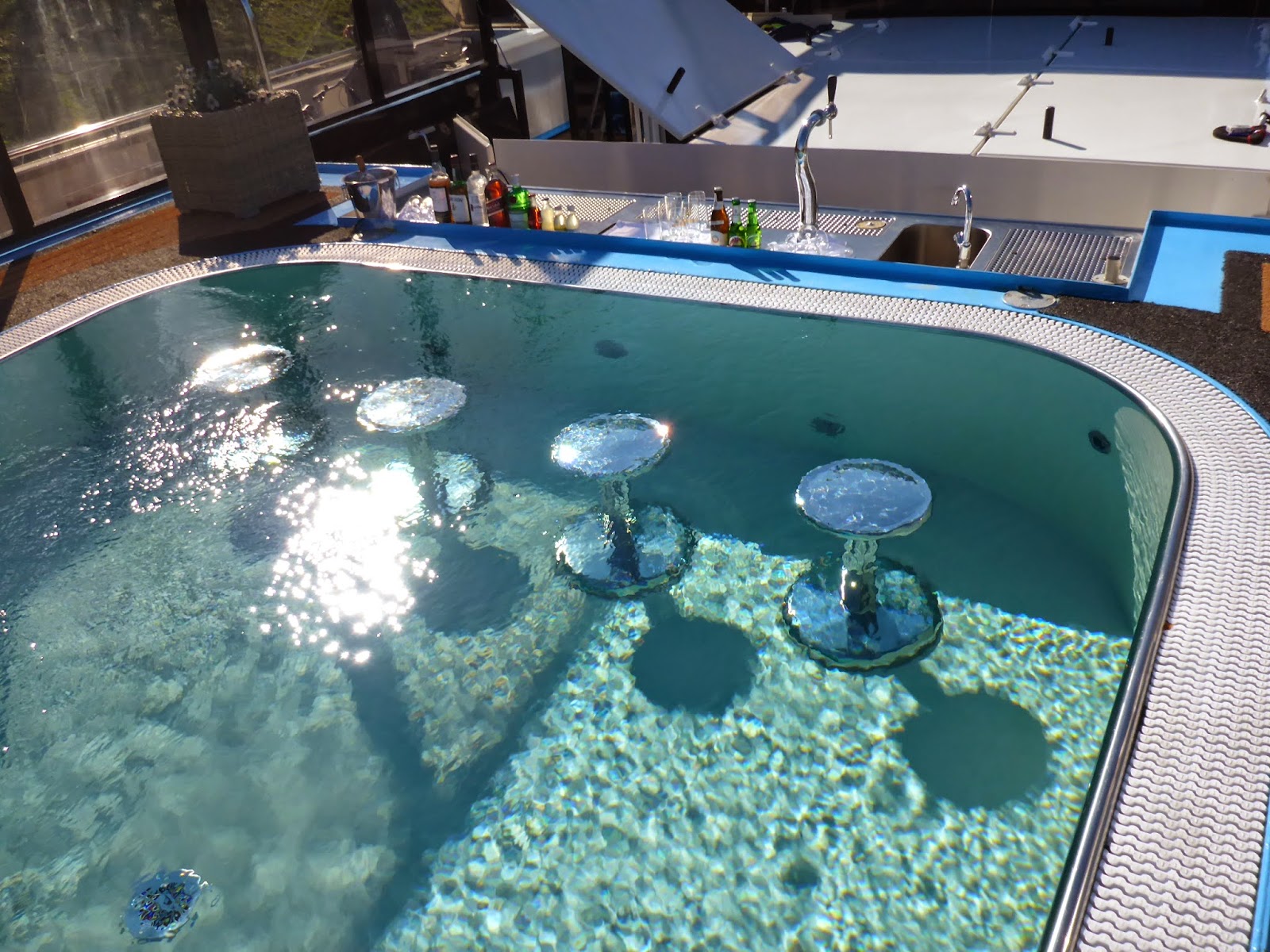 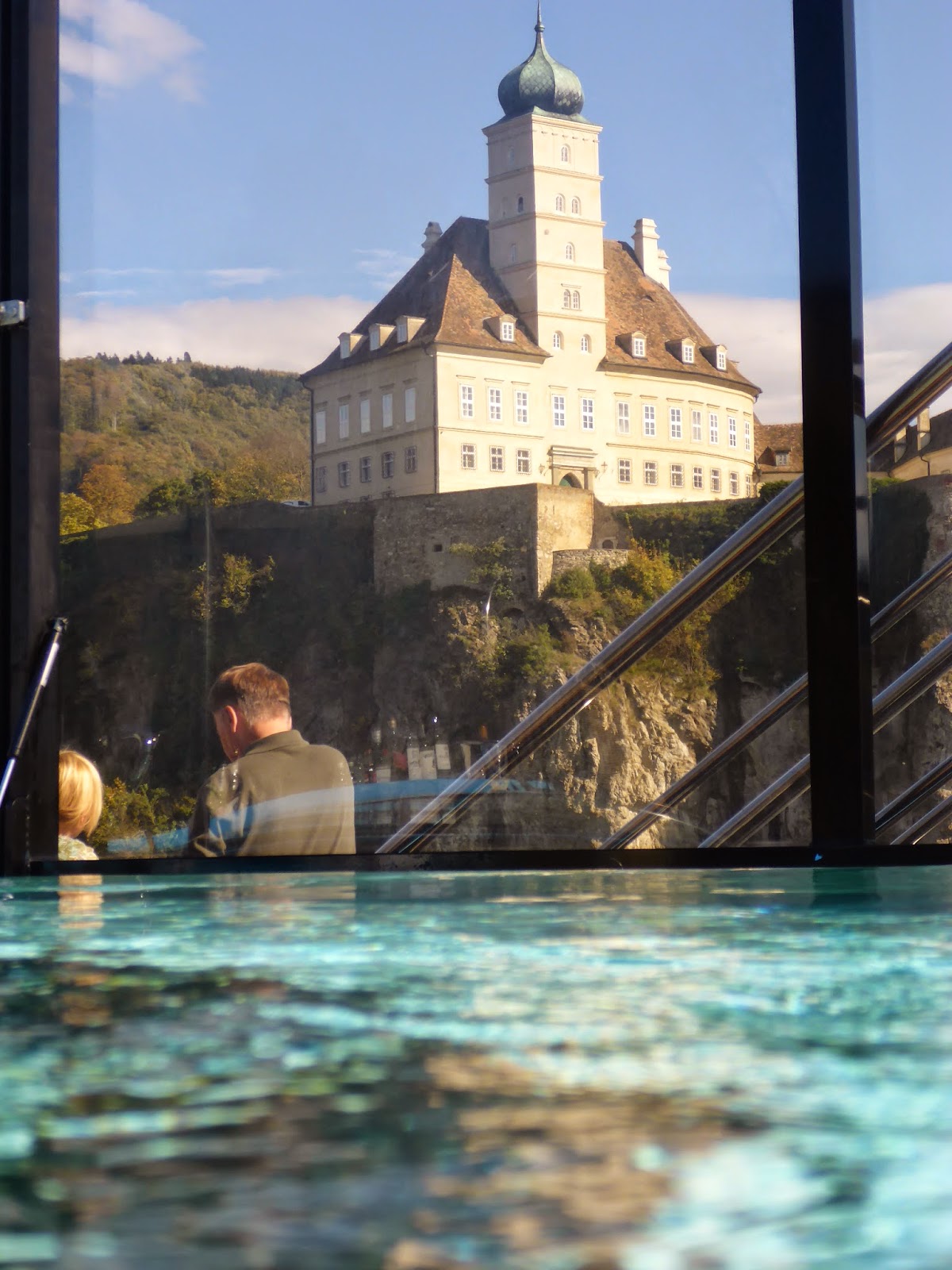 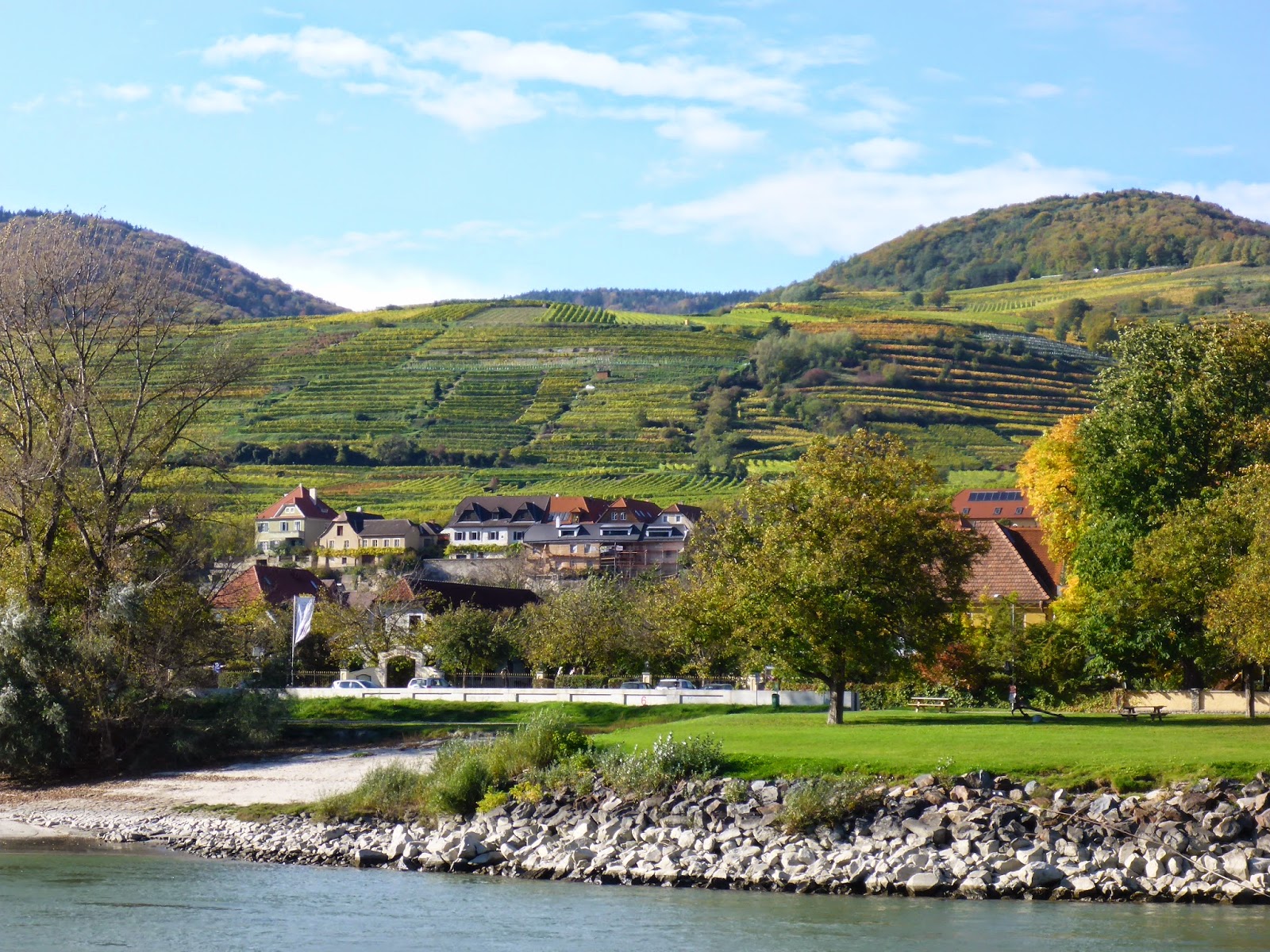 We then arrived in Durnstein, Austria which is a truly charming little village.  While famous for its apricot and the jams, liquors and more made from them…as well as another church…strolling through this town was peaceful and relaxing (though you can climb to the castle ruins looming above the church).  AmaWaterways included a second wine tasting here including a Gruner Veltiner, a Riesling and a Zweigelt.  The wines were decent enough, but the person running the tasting was aggressive and bothersome (unlike the charming folks who did the one earlier in the cruise). 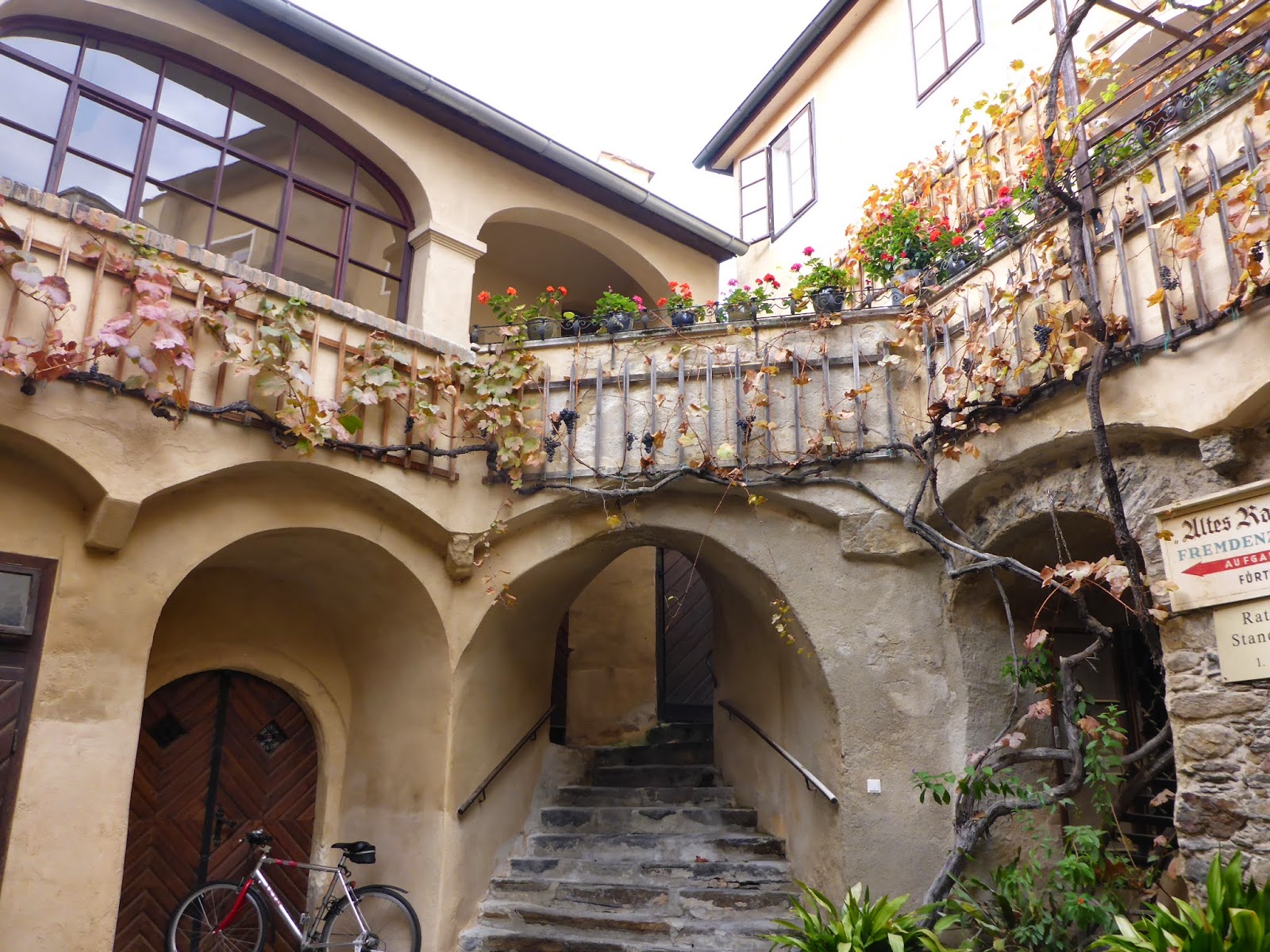 Late in the evening we set sail for Vienna, Austria; which I have been waiting for.  For all of the great cities I have visited this is one important one I had not yet been to.  This was a busy day with events literally morning, afternoon and evening!

As AmaWaterways regularly offers alternatives to the standard tours, I chose the Hidden Vienna Walking tour. Our guide took our small group through some of the backstreets of Vienna showing us some of the medieval areas and relaying some interesting stories and myths.  He had some interesting insights into Mozart’s life and death.


As he was talking the clouds turned to drizzle and then the drizzle turned to rain and, as the tour was wrapping up (for our free time) the skies opened and there was a deluge.  I was glad the specially embroidered Goldring Travel jackets that claimed to be waterproof actually were! (I am not sure why a couple of people felt it was the guide’s fault or how they thought he could make the bus instantly appear.)

Despite the torrential rain, two couples in my group graciously invited me to join them for something to eat at Demel.  As we walked I was able to enjoy some of the other sites of Vienna, which gave me more of a feel that I had visited the city.  When we arrived at Demel, which I did not know of in advance, I immediately knew I was in a little bit of heaven if you love chocolates or pastries.  What I didn’t know is that there was an upstairs, passing the show bakery, where a bit of elegance and a bit to eat could also be enjoyed.

I had a wonderful pate, but more importantly coffee served with decadent whipped cream and then a delicious chestnut dessert.  It was a real treat. 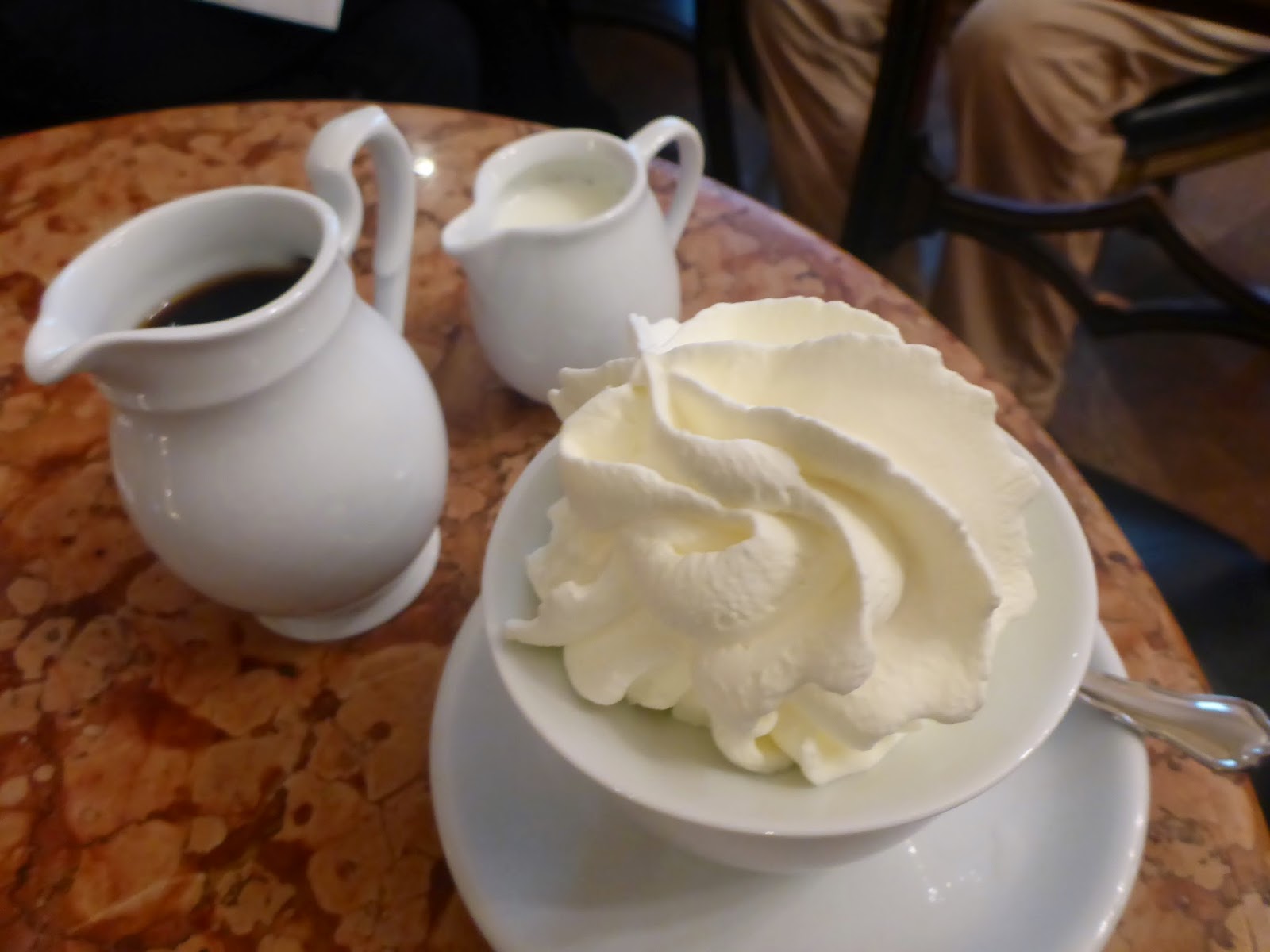 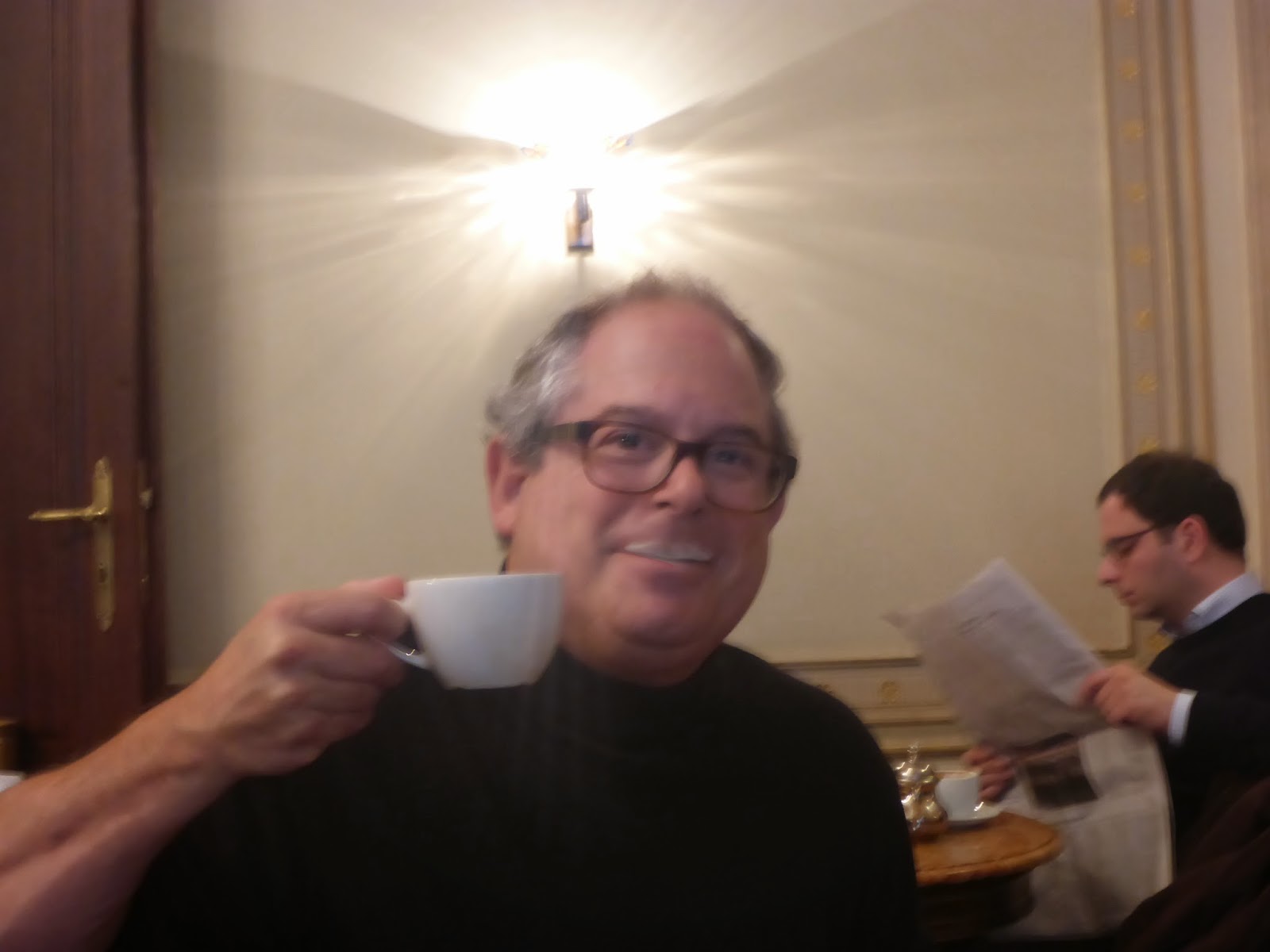 I had just enough time to get back to the ship via taxi (which was very easy), change my soaked clothes and head out for the extra cost tour to Schonbrunn Palace.  Now, I understand it is supposed to be one of the, if not the, most opulent palace in Europe, but I am not a palace kind of guy.  I heard lots of positive comments and it is a “must see” place…which I have now seen.

Upon my return I had just enough time to take a warm shower (needed after all the rain…that finally cleared as we boarded the bus to head back to the ship), have an early dinner with a Viennese theme (schnitzel was my choice) and head out to the extra cost Mozart and Strauss concert performed by the Weiner Residence Orchestra.  While the setting was not impressive, the concert (which included some opera and ballet) was quite good.  I was very happy I attended it.

An early morning sailing brought us to our second to last port:  Bratislava, Slovakia.  I had no idea of what to expect and I was more than pleasantly surprised.  This small country and city suffered under Soviet rule, first with a Communist approach and then, after an attempted revolution, a socialist approach.  It has a small, very walkable, charming old city and, as I learned on the Culinary Delights tour, a very modern new city area with a huge modern mall, hotels and opera house. 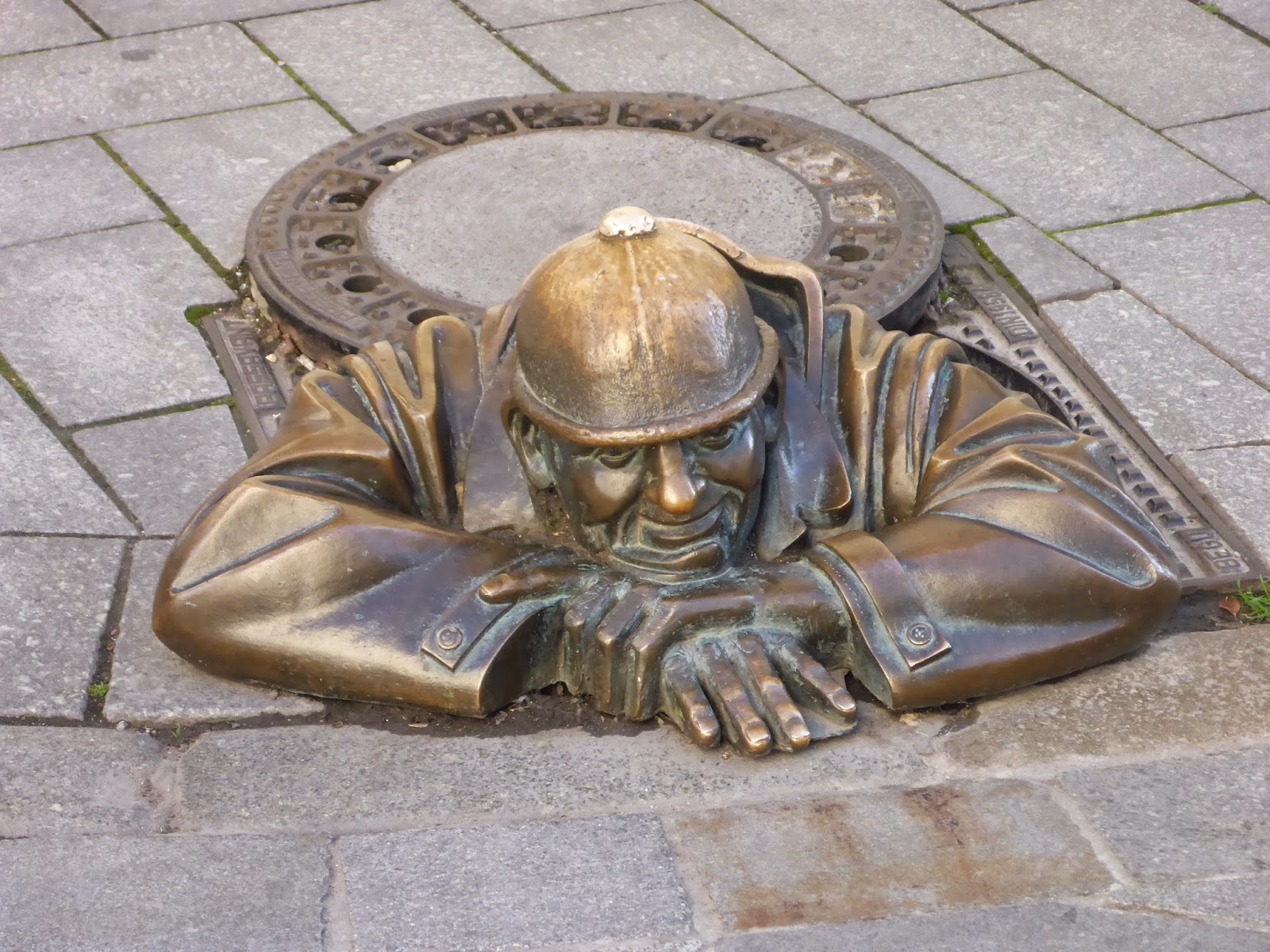 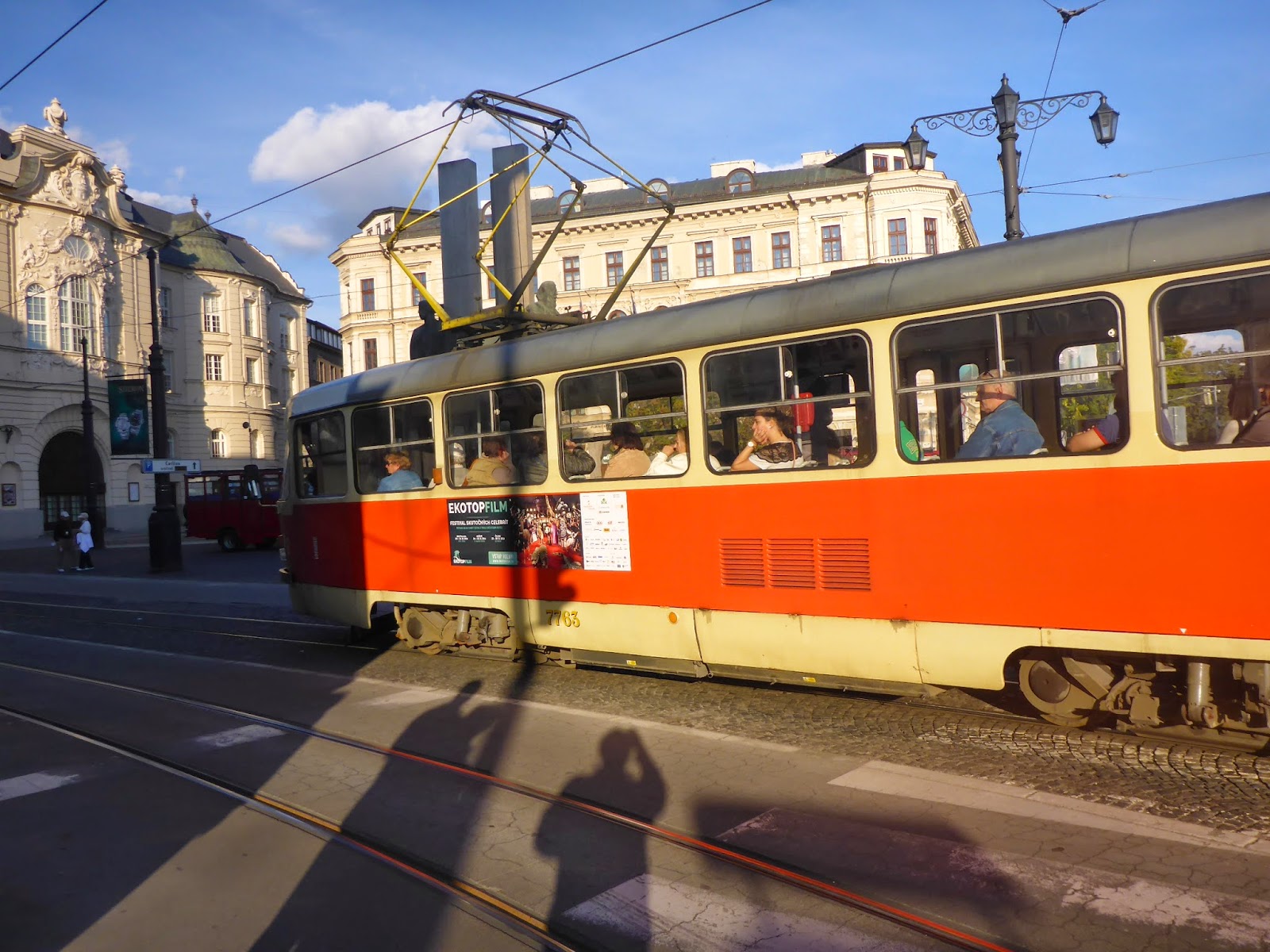 The guide for the Culinary Delights tour was the “delight”.  As we sat waiting for our food to be prepared (other than what we did to sort of assist) and while we dined, she discussed everything from the effects of the Soviet occupation to taxes, education to culture to history.  (I knew she would be good when she explained the explained the horrible looking building across from our ship was a “gift” from the Soviets.  She explained its design prevented the sun from coming in on sunny days and let the rain in on rainy days…rendering it useless as well as ugly.) 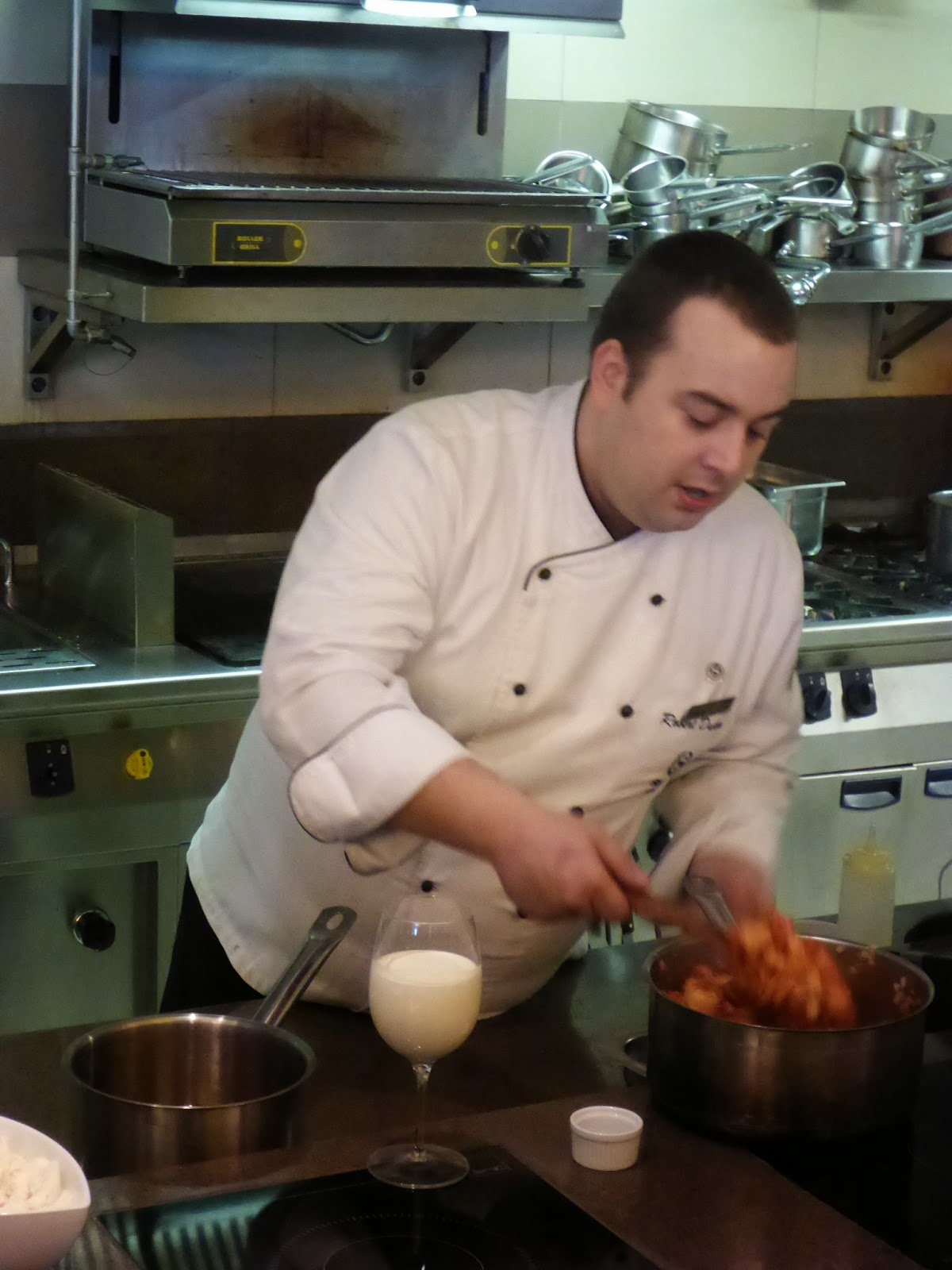 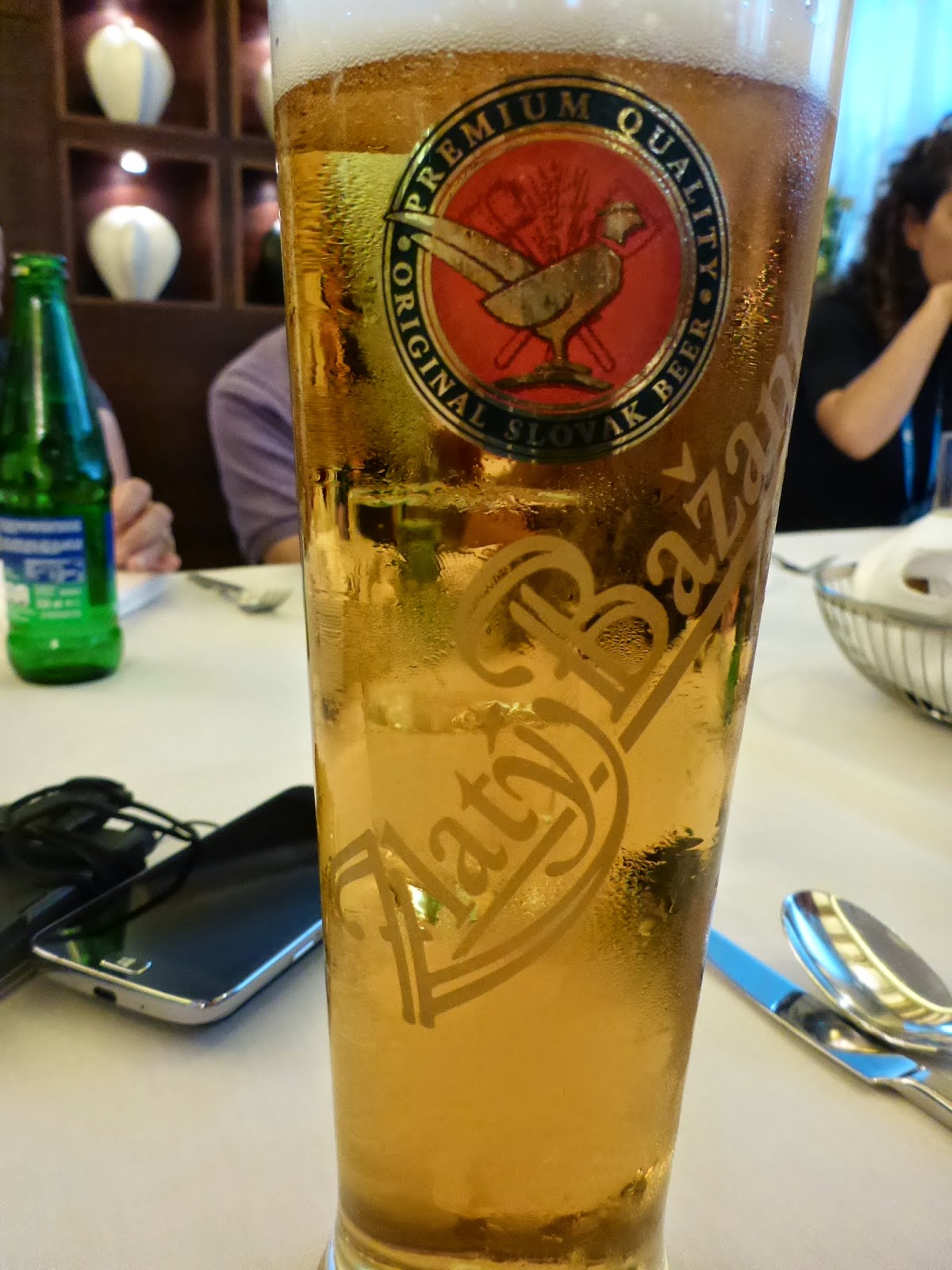 After our tour I had time to take another stroll through old city before heading back to the ship.  I don’t know that I will ever be back, but I surprisingly am glad I was here.

Next up is my final port,  Budapest, Hungary, and the last event of the 2014 Goldring Travel Food & Wine Cruise:  A Tokaji wine tasting!