Goldring Travel Cruising on SeaDream Yacht Club – Italy and Corisca 2014 – Part II (Getting There, The Stateroom and First Impressions) 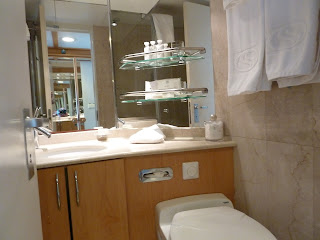 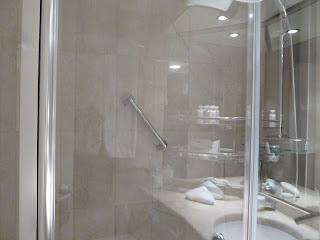 After unpacking I headed to the Top of the Yacht Bar after a
quick tour of the ship.  Instantly you
can tell the service is excellent.  The bartender
greeted me, the wait staff was scurrying about attending to every new face and comments
like “So good to see you again” and “I am so happy to be back onboard” were
commonplace.  It sets a very nice
tone.
I enjoyed my vodka and tonic and
the side dish of nuts and chatted with a lovely American family (including their
three daughters) taking their first cruise after spending a week on power land trip
around Italy.  It was announced that due
to high winds and some rougher seas the departure would be delayed until 9:00
p.m.  While that should not have been a
reason to have another drink, it was a good enough excuse.
As I am traveling alone, when I entered the dining room I
was asked if I wished to be social or to dine alone.  I thought that was an interesting way to ask
if I wanted to dine with someone.  Nice.
I had dinner with an older, and quite interesting, Australian woman.  As I came in later than she, I sort or rushed
through my courses, but enjoyed them all.
A nice antipasti platter (beautifully presented), a delicious corn and
crab chowder and very nicely prepared duck breast.  (I know the dishes don’t pair well, but I was
rushed and just picked what I liked.)
Pablo, the sommelier, knew that my dinner companion – a past
SeaDream guest – liked Cote du Rhone so he poured it freely for her.  I drank a Tempranillo…and then after my meal
Pablo, who now had some time, came over for a chat and offered some Cotes du
Rhone to me to try.  Very nice. 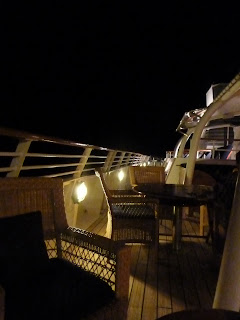 An after dinner whiskey and a cigar brought my long day to a
close. 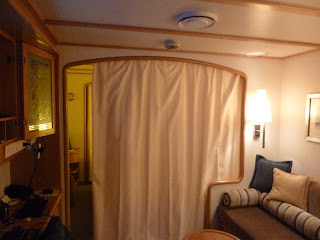 With a comfortable bed and the
ship having little more than a gentle rocking, I slept…soundly.
A very nice first day.
But tomorrow will start my understanding what SeaDream Yacht Club is
really all about.