We awoke on Day 2 in the small town of Bartin, Turkey (identified, for some reason unknown to me as Amasra, Turkey).  Being that it was an early start, I popped up to The Yacht Club (formerly the Observation Lounge) for a freshly brewed double espresso and a café Americano along with a fresh yogurt, granola and fruit cup with a fresh muffin.  The Yacht Club is a truly beautiful space; actually a big improvement.  It has wonderful semi-private seating areas with a very comfortable (again blue and beige) décor.  The photographs don’t do it justice. 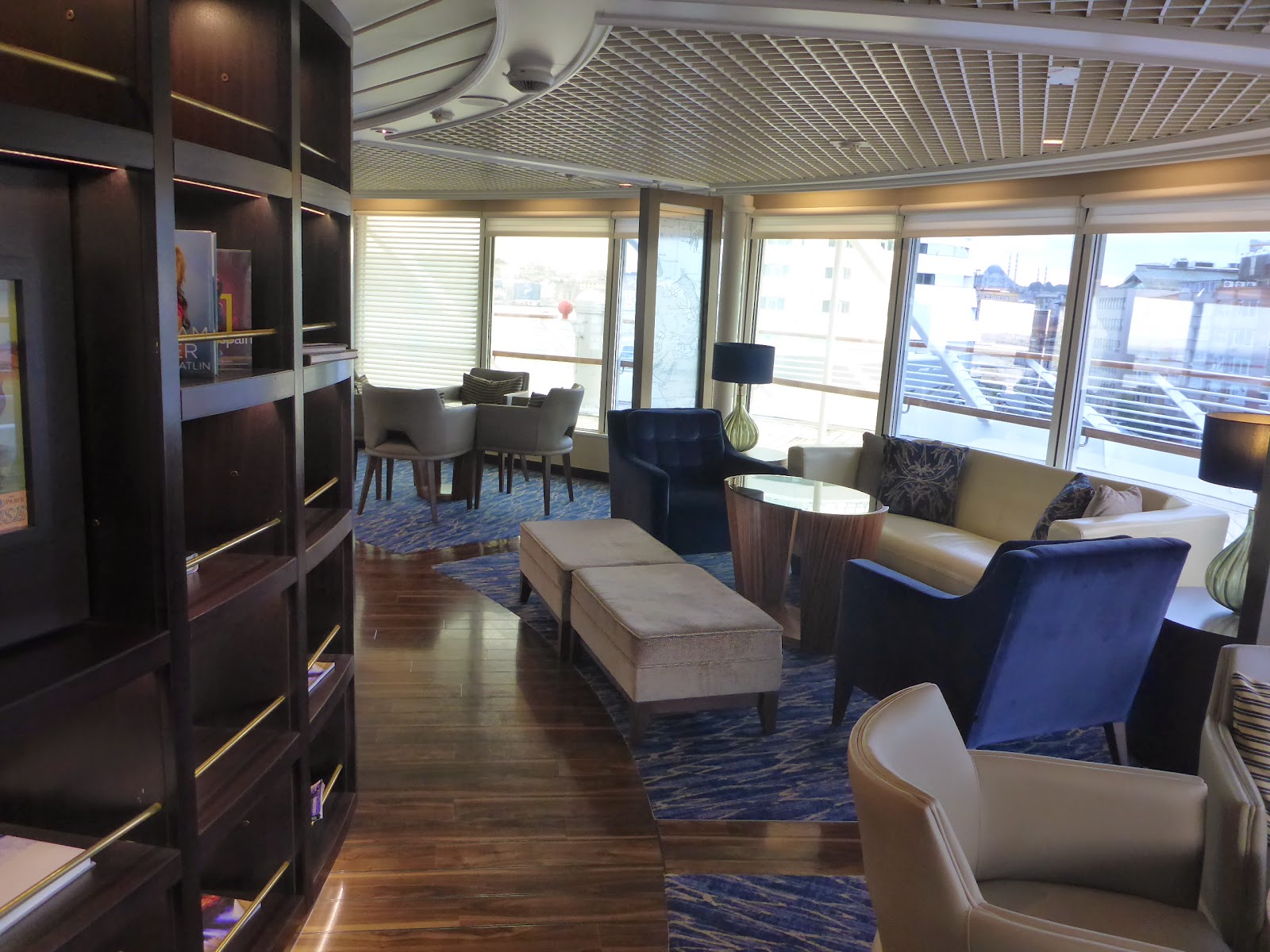 After our quick breakfast we were off.  As the town of Bartin itself was a bit distant from the ship and did not have anything particularly interesting, I opted for a ship’s tour to Safranbolu, named for its historical ties to the production of saffron.  The town was charming, but it was our guide that made the day.  He was one of the best I have ever had.  Fluent in English, extremely well educated, charming, informative, controversial and funny all rolled into one.

It was a long day, but I still had time for a soak in the forward hot tub as we set sail before having dinner in Candles, which is the evening version of the Veranda and a wonderful al fresco dining experience.  Windstar allows you to dine there one evening per cruise, but if there is an opening a second or third evening is possible.  As such the menu does not change and it is quite consistent with the menu on the other Windstar ships offering fish and meats as well as a vegetarian option along with ala carte vegetables served family style.  I had, again, a great veal chop.

In the Veranda there is a new hot buffet area on the starboard side with offerings at both breakfast and lunch, while dinner is a pure sit down affair.  The Windstar staff does provide waiter service for items on the printed menu (such as hamburgers) as well as drinks (which are only provided by the bar steward), but overall service is limited. 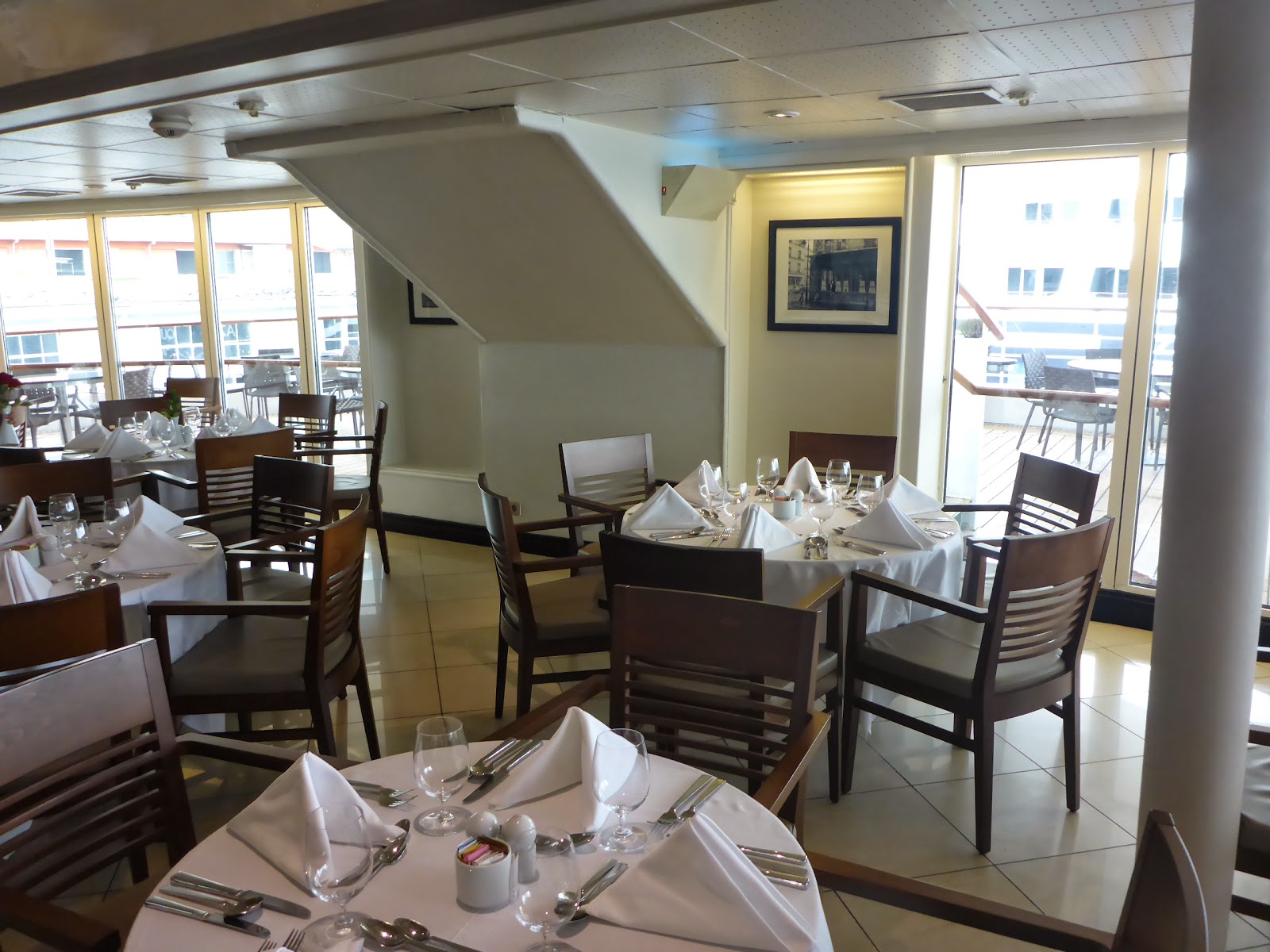 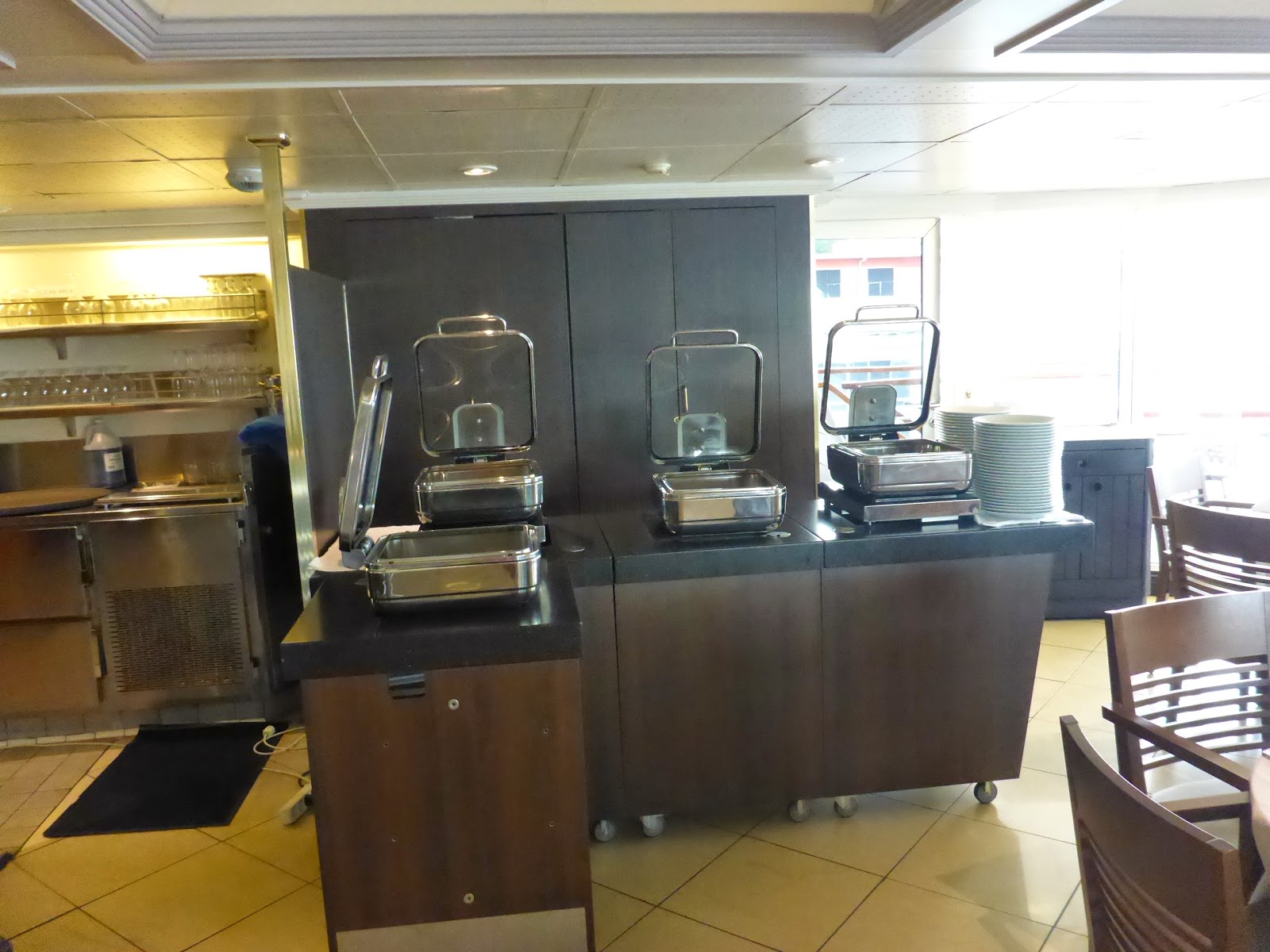 To be sure there are differences and simple things like having placemats on the outdoor tables at breakfast and lunch would be an improvement as would having more than one bar steward.

After dinner it was up to the Star Bar for a nightcap.  It is, by the way,  the only location where one can smoke a cigar.

The next morning it was up early as we had another excursion; this one a complimentary one from Windstar for the entire ship with five buses heading to Amasya; a small town about 2 hours from the ship’s port of Samsun.  The highlight was Windstar’s orchestrating all of us who had our fantastic guide the first day getting him for the second day.  Without him honestly this would have been a disaster.

While I appreciate this was a substitute port, four hours on a bus for a quick spin around a small museum, a visit to another mosque, a stroll along a small riverfront and a lunch was a miss.  I would have preferred enjoying the Star Pride for the day…but I am not so unappreciative as to not recognize that I have been to a place that few have been to and had the opportunity to be educated for a second day by a truly wonderful guide; courtesy of Windstar.

Tonight we dined in Candles again, but this time with Nick Burger, the hotel manager.  It was good catching up with Nick, who I knew from the ship’s Seabourn days, and discussing the differences in philosophy from the Pride being a Seabourn ship and now a Windstar one.  There is no question that Seabourn has a much higher staff to guest ratio and, as a result, there is a definite difference in service and, of course, what can be delivered.  The question is whether Windstar should, or frankly needs to, deliver service at those higher levels.  As you will read below:  not so much.

We also talked about the Pride being a work in progress…and it is.  Make no mistake, there is work to be done on the ship.  The interior spaces are beautiful, refreshed and work well.  It is the exterior that needs assistance and is being worked on.  I have noticed that there is a good bit of daily maintenance that seems to be missed with rust spots being a common site.  The teak decks are in need of some TLC.  The hot tubs are finicky and the pool’s filter system is not working properly.  All of the canvas needs replacement (they work but are stained and I understand some replacements are onboard to be installed).  A good number of the deck lounges are worn and some have broken mesh.  Probably the most noticeable of the problems are the windows for the Owner’s Suites that are not in a good state at all.  (To me it looks like dry dock work being slowly attended to at sea!) I know the Pride needed some work, but I am unsure if the lesser number of deck staff is causing a back-slide on maintenance or if they are simply attending to things below decks.

But no matter who I spoke to they had very consistent comments pretty much in this order:

(A) They love the sails and miss them on this ship;
(B) They love the suites;
(C) They love the Windstar experience both as to service and cuisine; and,
(D) There are a few things that need to be fixed, but nothing that ruins their cruise.

I also find the demographic to be interesting (and different from Seabourn).  More than a few guests are well traveled, though for some it is just reaching a destination rather than seeking out an immersive experience…though some were “all in”.  Others are more focused on “value” rather than product; which is not dissimilar to what I experienced on my G Adventures Amazon River cruise this past July.  OAT (Overseas Adventure Travel) was mentioned more than once (though one couple in their sixties referred to their experience as “Old people Are Traveling”) as were NCL and Princess.

Because of this the cuisine is good quality and well prepared, but is not terribly sophisticated (tasty mash potatoes and broccoli rather than an elegant vegetable dish or lobster tail in a butter sauce rather than presented in an artful culinary display with the waiter taking it out of the shell for you).  As always I ran my hamburger and hot dog test and found the presentation of both to be very good; with coleslaw and French fries along with ketchup on an appropriate rolls.  (I had to scrounge for mustard for my hot dog, but sauerkraut was provided on request.)

More on cuisine and service later, as I have digressed.

After a lovely dinner, Nick headed back to work and we headed to the Compass Rose (formerly The Club).  It has been significantly updated and is a modern, comfortable, venue.  Gone is the “fishbowl” but there are lounges set up to still segregate the bar area from the dance floor.  Rather than the duet being “center stage” they are now set off to the port side. The bar itself remains pretty much as it was, but with a bit of leather and new bar stools similar to those in the Star Bar. 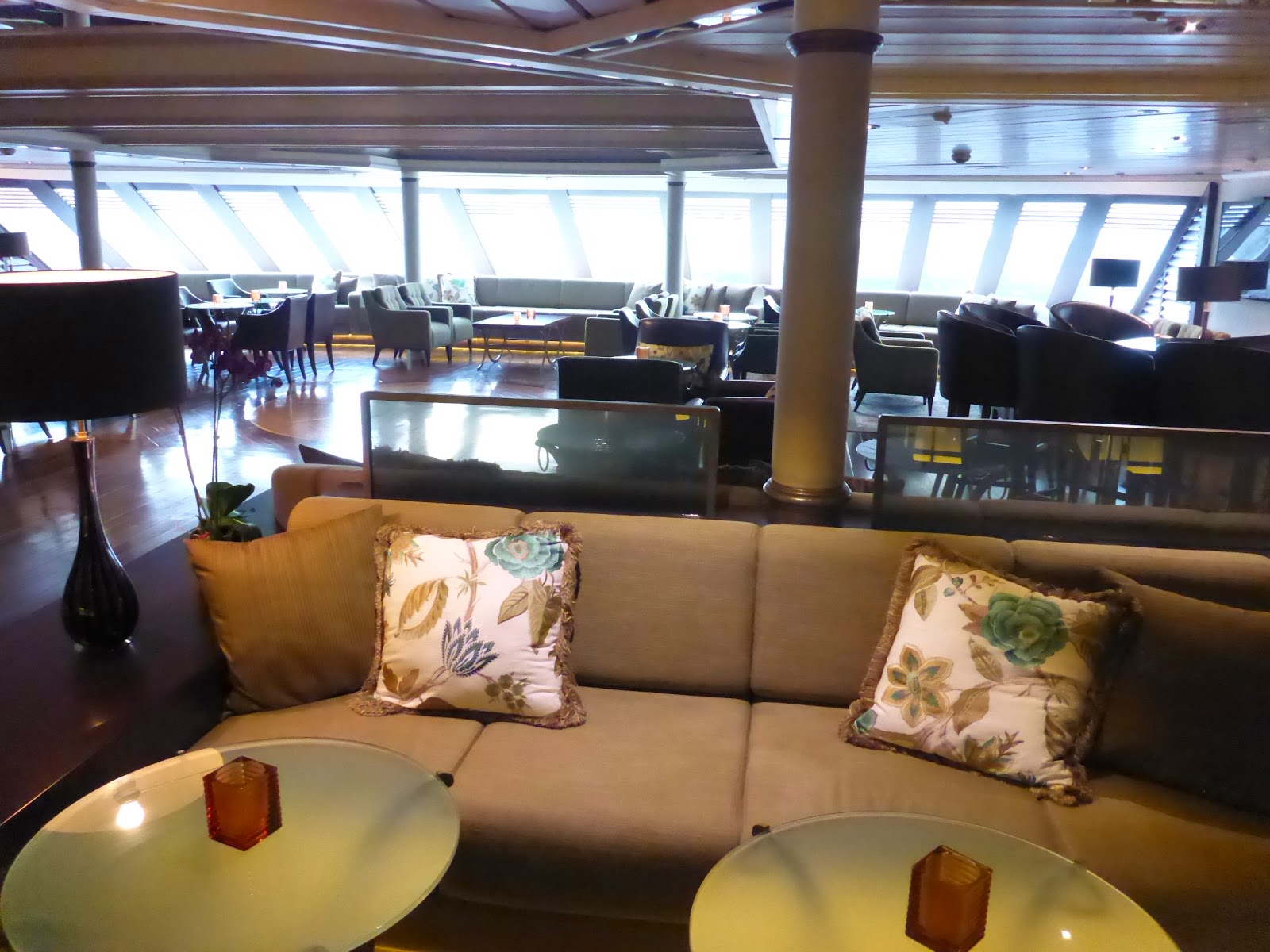 Also, during the day there are televisions mounted on the walls port and starboard aft with seating areas around them; clearly in an effort to have this venue better utilized.  (In the evenings I notice they are turned off…thankfully.) 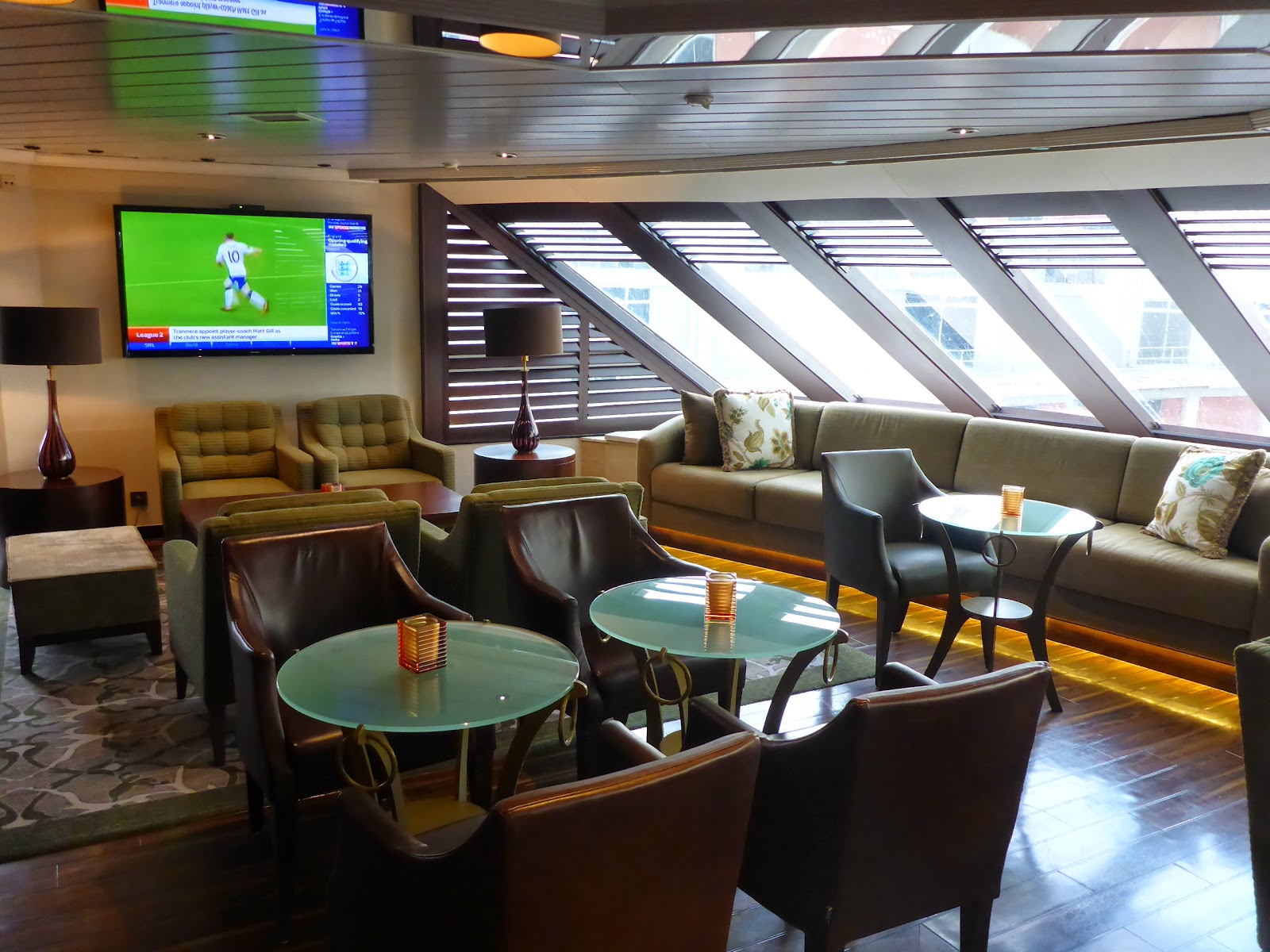 Tomorrow is a Day at Sea.