Goldring Travel’s Culinary & Cultural Cruises are not simplistically about “food and wine”, but rather why is that the food and wine of the area, where does it come from, how and why is it prepared the way it is, what makes it special or unique.  Anyone can supply a guest with good food and interesting wines, but doing it in a manner than makes it memorable:  That is the challenge. And Goldring Travel is taking the challenge on for the eleventh year in a row.

The 2017 Goldring Travel Culinary & Cultural Cruise on the Seabourn Encore started with my flights from Lake Tahoe, California (actually, nearby Reno, Nevada) to Barcelona, Spain.  Due to a late flight schedule change I moved my second flight from Denver, Colorado to Newark, New Jersey to an earlier flight with a safer connection time for my final flight to Barcelona, Spain.  This resulted in my first experience in many years sitting in the back of a United plane in regular economy.  (Yes, I know:  First world problems.)  The seatback in front of me was so close I had to remove my glasses in order to properly focus on the television screen.  Yikes!
But fortunately the two men sitting next to me were two Pakistani engineers that were enjoying their first trip to the United States.  They said they were surprised that Americans were so friendly towards them; far nicer than the Swedish they have met while they are living in Sweden.  And that got us into a great, and elevated, discussion of Pakistani politics and the curious relationship between our two countries, the Taliban, Pakistani economics and politics, etc. Fantastic.  (I don’t think I will be traveling to Pakistan anytime soon, but it certainly peaks my interest!)
It also made me think about those on our plane who may have thought these two gentlemen were probably dangerous and the reality that they were two super-nice intelligent and appreciative fellow travelers.  Just sayin’.
After arriving in Barcelona I took one of the many taxis to The Murmuri Hotel; a boutique hotel that my clients really enjoy, located on the same street but well above the frenetic tourist portion of La Rambla.  Literally, as I walked in the door some of my clients greeted me…and the experience had begun.

With my room not ready and it being Sunday morning, which in Barcelona means pretty much everything is closed, I strolled from the top of La Rambla all the way to the bottom. The crowds were overwhelming to me…and I am from the New York area!  Seeking refuge and some quiet I thought the Gothic Quarter would be quieter. Nope. More throngs of people.

Normally I would try to find a small restaurant, but with those being closed, overwhelmed or uninspiring touristic places, I came across El Grand Café; a beautiful upscale restaurant that literally just opened as I arrived.  Quiet.  Ahhhh.
I ordered a good bottle of cava (Spanish sparkling wine) along with anchovies, Iberian ham, tomato bread, and tripe.  As I was sitting in a nice window table I noticed that the tourists were so touristic they were taking pictures of me.  OMG. I did not keep me from enjoying my lunch.  In fact, I enjoyed it so much I ordered pit trotters (feet) with liver and truffle to extend my stay.  It was a bit of luck as it was a truly awesome and flavorful dish. I would return just to enjoy that dish again.

By then I knew I could check-in to The Murmuri, enjoy my junior suite

and get ready for dinner with my travel partners on this trip:  Michelle Shea, the Adventure Dining Guide chef/Mixologist and Patty, the photographer and videographer who will be making videos; one of which will be given to each of the Goldring Travel guests documenting our culinary and cultural experiences during out cruise.

Dinner was, of course, at my favorite restaurant in Barcelona:  Los Caracoles; established in 1835. After walking through the ancient kitchen, with its coal and wood fired stoves, we sat at the same table I dined at with my daughter less than a month ago and continued my tradition of always ordering the snails.

The next morning, Michelle, Patty and I headed out early to La Boqueria, which I believe is the best market in the world, to stock up on some culinary goodies for one or more of our culinary events.  I picked some Catalan cheeses, spice covered cured meats and some candied walnuts. 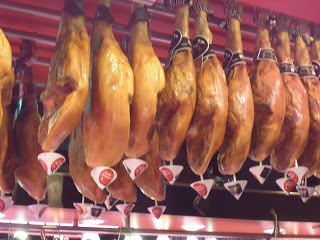 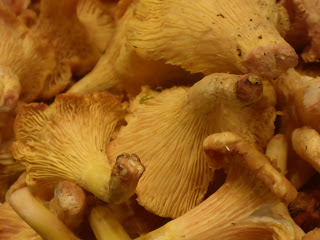 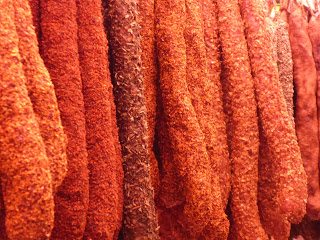 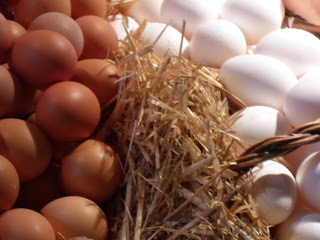 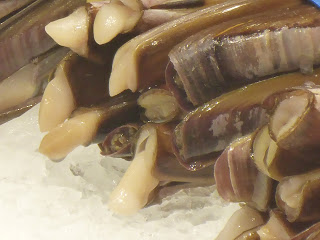 Our small, exclusive, group then gathered close by so that our first Culinary Event could commence.  Our guide gave us a quick tour of La Boqueria tasting both jamon (Iberian ham) and two cheeses (goat and sheep) 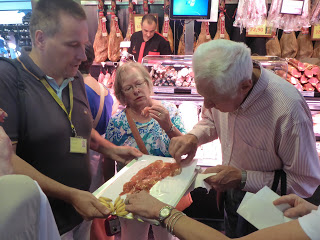 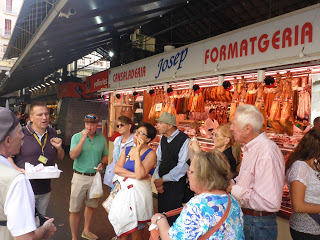 before starting our Pincho (tapas) and Wine tour through Barcelona’s Gothic Quarter and beyond.  We made two incredibly different stops.

At the first each guest  selected four pinchos of their liking and paired it with a red or white wine or cava of their choice. 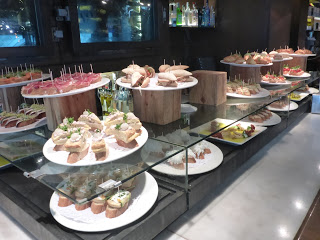 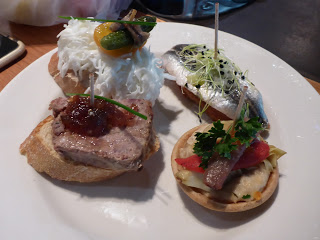 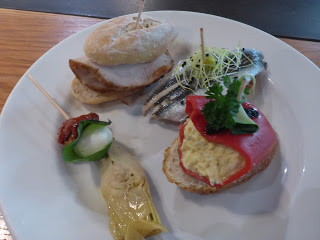 At the second it was more of the same, 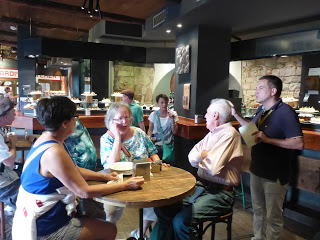 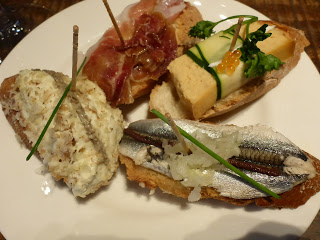 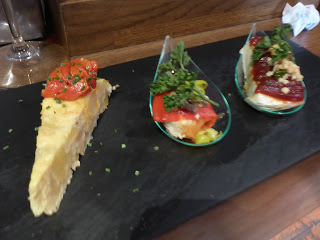 but with a unique second wine that is aerated by pouring it from a height into the glass. 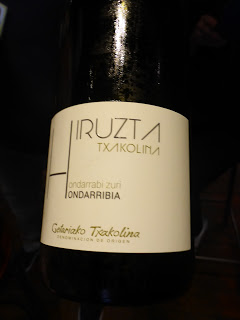 As we strolled in and out of the Gothic Quarter, our guide made an impromptu stop at a Casa Gispert, established in 1851, which is famous for its roasted nuts.  Our treat:  Almonds. 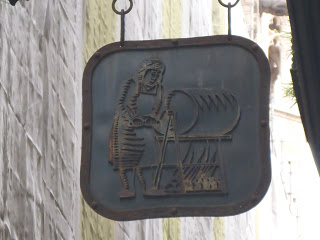 We finished our tour with a more formal tasting of three wines at, of all places, the touristic Jamon Experience.  This was a first for them in a new space for some very high quality wines.  Ironically the cava they chose was the same one I selected the day before at El Grand Café! 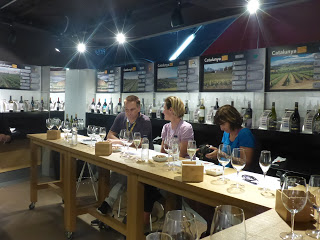 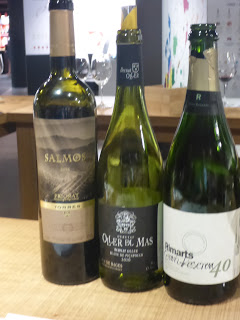 (The best part of this experience was actually that evening when one of my guests (and new clients) said:  “We did not like Barcelona at all our first day, but after experiencing with you, we love it!”  And that is, of course, what I strive to do.)
It was then time for everyone to gather their luggage at their respective hotels and then head over to the Seabourn Encore.  Even before I got on the ship I heard, “Mr. Goldring…I mean Eric…I heard you were going to be onboard.  It is fantastic to see you!”  It was Francesca; a favorite of mine.
After settling in, and enjoying a wonderful dinner, it was off to the bar at the The Grill by Thomas Keller for a nightcap.  I was offered potato chips…and that got me thinking caviar.  Since that bar is controlled by Thomas Keller and caviar is not on his menu, there was only one thing to do:  Head to the Observation Lounge.  Of course, in true Seabourn fashion, when we arrived caviar was waiting for us.  And then we had more caviar…and only then did we head to bed.
The next day we arrived in Valencia.  Having been there just a few weeks ago, I took the time for a leisurely breakfast

and then to simply stroll around briefly…discovering a new for me Catalon pastry:  Cocas.  It is a semi-sweet flat pastry, this one covered with almonds and a bit of honey.  Yum!

It was then back to the Central Mercat where I purchased some local Valencia cheeses, including a suppposed goat blue cheese (though I think it is a sheep’s milk cheese) and a huge Valencia tomato…which is so ugly I have to try it.  So the annual stinky cheese smell in my suite has begun!

It was then back to the ship and after a short nap and a soak in my (the forward) hot tub, my first logistics meeting with the Seabourn Encore’s Hotel Director, Executive Chef, Food & Beverage Manger and Restaurant Manager.

Dinner was in The Grill by Thomas Keller.  Can you guess what I had?  The chicken, of course! It was another extraordinary dining experience.  And because it is so consistently good, I won’t bother repeating all that was enjoyed.
In what seems to be a pattern, it was time for an after dinner cocktail the Thomas Keller bar and then up to the Observation Bar for a night cap…and that is when, as Seabourn does, three portions of caviar just appeared.  A great way to end another Seabourn day…with a sea day to follow!
I spent our Sea Day (the only one on this itinerary) in The Retreat.  Once again, it was nice, but just not something I think is worth the money or space.  It was underutilized as well, with an 80 degree sunshine day, there were only five cabanas being used. However, it was a good time to get some work done and to get organized for the coming, very busy, days as there are many Culinary & Cultural Events to come!