Avalon Waterways - Myanmar - Part II (Getting Here & Getting It On) 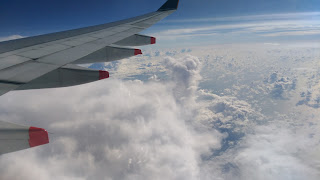 After collecting my bag, I was met by Myo, a very friendly and well-spoken man, who will be our guide for the next 14 days.  Myo is highly experienced not only guiding tours to visitors of Myanmar (from a variety of countries), but also guiding Burmese to other countries.  Myo has guided this southbound tour consistently for two years, so I am very confident that Avalon Waterways is using high quality guides.
During our drive from the airport to the Sule Shangri-la Hotel in downtown Yangon, Myo gives me some great background information on Yangon and Myanmar generally.  Some things he tells me he will further explain when our group (which apparently is only 14 people) gets together tomorrow.
We had plenty to talk about since the 10 mile drive took about 45 minutes due to the traffic. Myanmar is a developing country and only recently opened its borders to freely purchasing automobiles.  So the infrastructure just doesn’t exist for all the cars…even simply where to park them. And speaking of cars, Myo warned me that cars do not stop for people…but more on that later!  (Interestingly all of the street signs are in Burmese and English.) 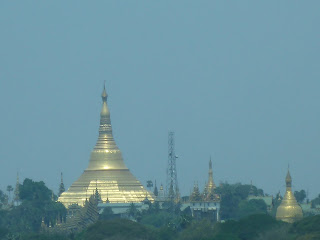 After Myo checked me into my room, which has a magnificent view of the Shwedagon Pagoda (which our group will visit tomorrow), it was time for me to explore a bit of Yangon.
First stop is a bank to change money.  (There are ATMs, but many do not work with US banks, so be prepared.)  The exchange rate is 1,350 Kyat (pronounced “jet”) to the US Dollar and pretty much anything you want to purchase is incredibly inexpensive.  (I bought a 30 GB data card for my hotspot for 21,500 K or about $16.)
It was then time to wander…and, knowing me, find street food.
The first thing I noticed is that people do not openly smile (something I noticed on my last trip to southern Myanmar) but if engaged the smiles do come out.  I popped into a random store to purchase a data SIM card and two young girls were only too eager to assist.  With little usable English (it is taught in school, but not conversationally…think high school Spanish) they basically nonverbally said, “Hey nice old guy, you don’t understand technology we will take care of this for you.”  So with a few laughs:  Mission accomplished.  (Note:  Technically the SIM card has to be registered with the government.  I’m not so sure that is followed.)
Now it was time to really walk. 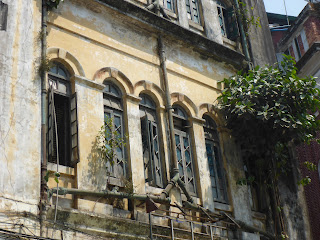 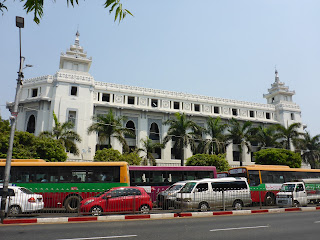 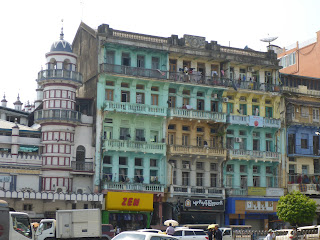 I noticed the fear in people’s eyes as they cross the busy streets. Coming from New York and driven around the world, traffic is not something I fear.  However, in Yangon there are literally no rules…other than don’t hit another car.  Crosswalks should be considered targets for pedestrians…which is why jogging across streets with one’s eyes never leaving the cars that come from whatever direction is the rule.
For me, I simply got into a pack of people and stayed in the middle; figuring they knew what they were doing or would get hit first!  One time I was on my own and as I looked to the left I saw a woman with a panicked face telling me to look right even though the light was red for that car!  (An interesting side note:  Cars drive on the right, but there is no law about which side the steering wheel is to be one.  Most are on the right because the initial supplier of cars during the more restrictive period provided them that way.)
I passed the Sule Pagoda and then found a Maha Bandula Park, across from Yangon City Hall, where many of the locals gathered in the afternoon heat…and it was hot (over 90 F and 32 C)…and which is also the location of a major bus hub.
Fortunately, a street lined with food stalls is right next to Maha Bandula Park. Actually it was less stalls and more of a system of tents and umbrellas covering everything from simple makeshift stoves to buffets. 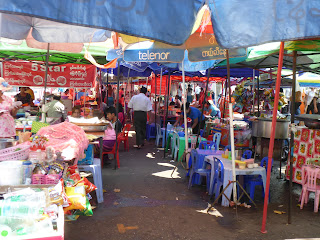 Most of what I saw was offal or noodles.  The volume of intestine and liver was, even for me, a bit overwhelming from a sense of cleanliness.  But the sights were fantastic!  Just what what I needed…almost. 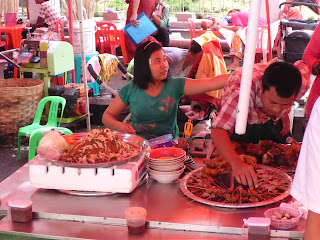 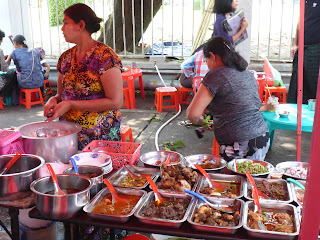 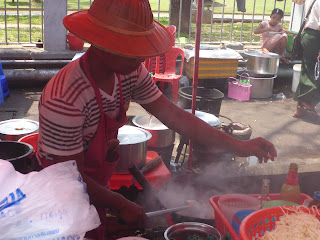 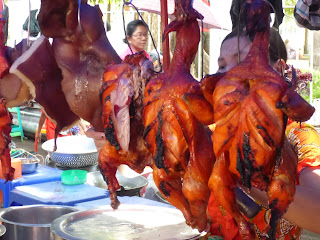 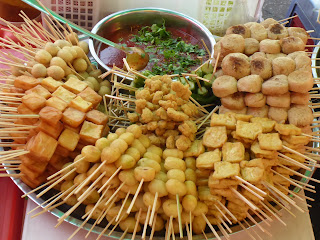 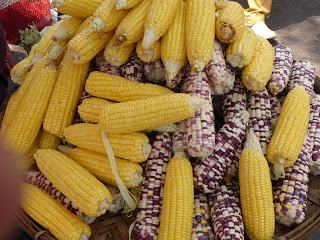 So I kept walking, with a few young women and men trying to sell me postcards or give me tours. Very polite and very kind in their approach.  And, yes, Trump came up as a way to determine if I was OK to speak with.  Eventually I came to the river, but there was too much construction and traffic to warrant crossing over to see it.
Starting to head back I wandered a bit more and came across two young women with a food stall that looked a bit more elaborate and one of them was a bit more focused on things appearing clean than I had witnessed earlier.  And that was exactly what I needed!

So…with not a clue what she was saying I ordered what I later phonetically wrote down and then found out is Kaw Yay Khauk Swe, or Chicken Egg Noodles.

Served as is apparently typical in Myanmar with broth on the side and with some delicious really spicy pickled vegetables and garlic it was perfect to get me going.  The cost was 800 Kyat or about 60 cents!
It wasn’t the best street food I’ve had, but it hit the spot…and the smile I got after I said it was good made it taste fantastic.
After a bit more of a walk, I figured it was time to head back to the hotel, get organized and take a nap.
As I am really looking forward to the program starting tomorrow and it is going to be a busy hot day I decided to stay in for the night…but as you see I wound up writing!
If you have any questions or observations along the way…or if you would like to book this, or any other, Avalon Waterways river cruise (or a Globus land tour), email me at eric@goldringtravel.com while I am away or call me upon my return:
United States:       (877) 2GO-LUXURY
United Kingdom:  020 8133 3450
Australia:              (07) 3102 4685
Everywhere Else: +1 530-562-9232