My second cruise to Antarctica on the Seabourn Quest continued with a day where a bit of rain was expected, but turned out to be a wild, windy and awe-inspiring event.  It would also set up an incredible evening the next day.

Our landing at Cuverville Island was cancelled, the decks were closed and furniture outside of the Colonnade sailed across the deck as 50 plus mile an hour katabatic winds whipped the Seabourn Quest.

Despite the weather, Captain Alex wanted to try to traverse the Lemaire Channel…if the wind and ice permitted.  I was looking forward to this since Captain Bjarne Larsen’s efforts during last year’s cruise were frustrated by too much ice.  But, alas, once again there was too much ice. 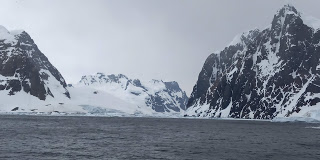 Our day was otherwise spent bouncing around the Antarctic waters waiting for some sort of break in the weather…which didn’t come until late in the evening. When I awoke in the morning the bad weather was gone, the winds were subsiding and there was brilliant blue skies and lots of sun.  In short, it was another WOW as we arrived at Torgersen Island and the nearby Palmer Station.

Last year it was so foggy for the first half of the day that I could not see the islands and I had no idea there were beautiful mountains towering over this inlet. 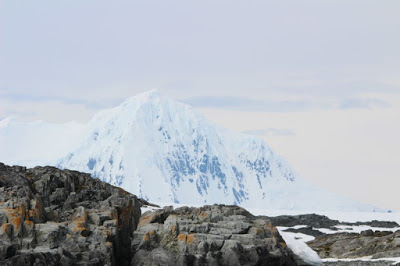 As some of the staff from Palmer Station (the United States research facility) enjoyed a nice meal, a bit of shopping for essentials and were loaded up with fresh vegetables (sorely missed in Antarctica!), the Seabourn Ventures team took the guests on zodiac tours, as landings in this area are prohibited. I was fortunate to have Claire Wallace as our guide, as this petite young woman with a never-ending sunny disposition and positive attitude lifted the enthusiasm in our zodiac on an absolutely beautiful day.

Unlike last year, this was my only opportunity to see Adele penguins. They are incredibly busy penguins that belly-slide down the snow.  And to me they are the second most beautiful penguins I will see on this journey. (I can’t wait to visit with the King penguins in the Falklands in a few days.)

Torgesen Island is also a great venue to see nesting Giant Petrels.  They are the vultures of the Antarctic, but there is something about them – possibly the way they soar – that I find attractive.

We were able to see a few lounging sea elephants, but one in particular had a full brown coat that contrasted nicely against the gray rocks.

And then word came over the radio about two Crab Eater seals on a bergy-bit.  Just beautiful against the glistening ice.

At our evening Briefing, Expedition Leader Chis Srigley advised that Captain Alex was going to attempt passing through the Lemaire Channel, but this time there was no wind, so only ice would stop us. Third time lucky??

Well, let’s just say we were incredibly lucky, but we never made it through the Lemaire Channel.  What we observed was by far the most amazing sunset any of us had ever seen as we sat motionless for over two hours.  (How many times have I said you just need to sit and observe; not tick things off and run to something else?!)

It started out with my marveling as the snow covered mountains and glaciers were turning pink and then purple; something a camera lens just cannot capture.  It was incredible. 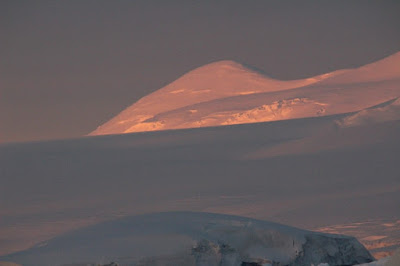 And then the colors started to change to gold

There is simply no way to fully capture this epic sunset.  Once in a lifetime!

Oh, but my evening was not finished.  Because I looked down from the Seabourn Quest’s Owner’s Suite 601 and…Leopard seal!

As it was now past midnight it was time to call it a night…and what a night!

And I was in the first group to depart in the morning for what will be our last landing at Waterboat Point and the Chilean Gonzalez Videla Base so I had to wake up early.

Last year this was my least favorite stop, so I was not happy about revisiting it.  But I guess with places like Peterman Island iced in, and this is the only place one can do some Antarctic shopping and have an unofficial stamp placed in your passport, it is kind of mandatory.  But I was wrong!  As with some other stops, what happens one year has little to do with what happens the following.

I awoke to a perfect day:  Warmer, no wind, glass-like calm waters and this breathtaking view from my veranda: 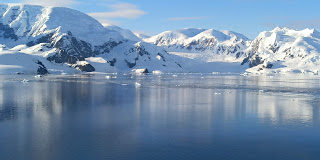 A short zodiac ride brought us to the base.  I spent most of my time chatting with the Seabourn Ventures team, who I find far more interesting!  I did manage to take some photos of Gentoo penguins that nest literally inches away from the paths. 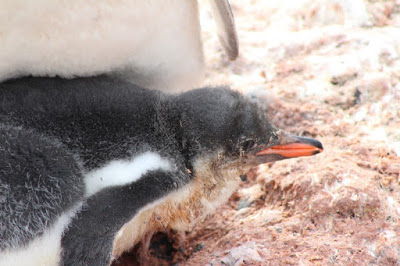 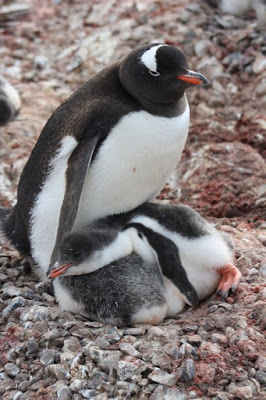 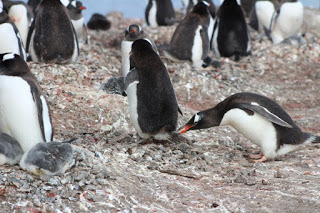 Just as I was about to make a hasty retreat to the Seabourn Quest: Whales!

I had seen a few whales as the Seabourn Quest cruised along, but not feeding in a quiet inlet.  It was exhilarating, but nothing like what was to come!

Last year I had a very disappointing time kayaking at Waterboat Point.  The weather was bad, the winds were high, my kayak partner was a bit off and two couples were too busy fighting to actually kayak (something I never witnessed before or since!).  Oh, but this time it was absolutely and unequivocally an 11 on a scale of 1-10.

The sun was shining, there was literally no wind, the seas were a smooth as glass and my kayaking partner was an incredibly nice and enthusiastic man.  We had hardly started to paddle and there was a large elephant seal lazing on some rocks…and then that unmistakable sound of a humpback whale taking a breath followed almost immediately by another.

We paddled closer, but keeping our distance.  And then closer.  And then closer.  It was clear these whales were putting on a show for us as the swam to the left and then the right staying with us as we pretty much floated other than moving closer to them.

I do have to admit that while being so close and seeing, hearing and smelling the humpback whales and the water was exhilarating and meditative at the same time, the joy expressed by my Swiss kayaking partner “Made My Day!”  It was as if Arnold Schwarzenegger was in my kayak: “Oh, this brings me such joy!”; “This is amazing!”; “This is incredible!” was repeated over and over again.  I could not help but feel his energy from behind me and the beauty of the whales in front of me.

While I did take a few photos, for this and another article to come, this was definitely a Put the Camera Down Moment.

But if you thought this was the highlight of the day you were wrong!  The Seabourn Ventures team, and therefore me, is lucky to have a tiny, blonde-haired, fireball of positive energy and a true Renaissance person (I hate the male/female designations) in the form of Claire Wallace.  A legal, biological and geopolitical wonder – among other things – Claire was in contact with some of her friends and was told of a gathering of humpbacks in the area.

Armed with the information, Captain Alex and Expedition Leader Srigley set a course and a dessert table for what is referred to as “Whale Soup”:  a thick gathering of humpback whales arriving just after dinner.

A group of whales to starboard, off the bow, a single breaching whale off the port and who knows what was happening behind us!  You look one way and someone shouts, “Over here!” and you turn…but then miss something “over there”.  Then you are distracted by a loud BOOM of a glacier calving. 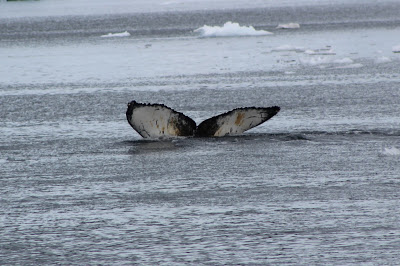 What a magnificent way to end our time in Antarctica…or was it?  Nope!

Captain Alex and Expedition Leader Srigley finally let the cat out of the bag.  With the seas being so calm on the way down to Antarctica the Seabourn Quest had an extra day to work with and a surprise I have kept secret since I boarded.

The stars have aligned and the plan is in place:  We are going to have one additional early morning in Antarctica visiting Enterprise Island and then, if everything goes well, we will visit an additional island in the Falklands, New Island to see Rockhopper penguins and seals.  The only catch is that the kayaking an zodiac explorations had to start at 6:00 AM; a small price to pay. (And, luckily, I was in the last group, so I wasn’t off the ship until noon!)

And what a final experience it was.  After visiting a colony of Blue-eyed Shags (cormorants)

we were visited by two different groups of very friendly humpback whales.  One group put on a show for us and then swam just a bit away and then it was the other group’s turn.  And this group got extremely friendly, lifting their heads out of the water to take a look around, and one was especially friendly with the zodiac driven by Brent Huston…like coming right up to him and then she dove down disappearing…only to have her resurface next to him with, as only he can do, Brent shouting, “Found ’em!”

Again, I took but a few photographs because it was a Put the Camera Down moment.  Zodiac engine off, the whales being the only thing you hear…and an obnoxious woman wearing a ridiculous fur hat and “no-see um”ski goggles mindless taking at least 2,000 photos of who knows what making an incessant noise of “Click. Click. Click.”

But as she did what she did, I was comforted in knowing these last moments in Antarctica were personal to me and not to create bragging rights to impress my friends back home.  I was seeing and experiencing Antarctica in its overwhelmingly large, beautiful, powerful, peaceful, majestic and personal self rather than smally through the filtered and altering eyes of fashion ski goggles and a camera viewfinder.

While I will write more on this, Antarctica is not a “once in a lifetime” destination.  It is, however, “a destination of a lifetime”.

And so with those thoughts we cruised back to the Seabourn Quest one final time in Antarctica with a gentle snowfall…making it perfect.