The Seabourn Quest continued its South Georgia Island, Antarctica and Patagonia Expedition with its “mandatory” visit to Paradise Bay, Antarctica and the Chilean base of Gonzalez Videla.  Having visited there twice before and seen its small colony of Gentoo penguins, small buildings and souvenir shop I chose to spend New Year’s Day chilling on the ship.  This was especially easy as the internet was slow, so it was near impossible for me to do much work.

This did not mean that I took this place or this day for granted. Quite to the contrary.  As I have previously written about this location and both my worst and one of my best kayaking experiences there (over my prior two visits) I won’t repeat myself.  Instead I intended to spend  some quality time in the hot tub located on the bow of the Seabourn Quest on Deck 6.  As I executed my plan, the clouds parted and the skies turned bluebird.  It was both exhilarating and peaceful just “being” in Paradise (Bay)…and a very memorable connection with the peace and beauty that Antarctica can offer if you just let it come to you.

Seabourn then did something new for Seabourn, exciting for many guests…and a bit troubling for me:  A true Polar Plunge where guests jumped into the Antarctic waters off the zodiac platform on Deck 3.  A total of 67 guests (but not this one) signed up to one-at-a-time jump into Antarctic waters.  This was far more impressive than the prior jump into the pool…and far more guests participated. 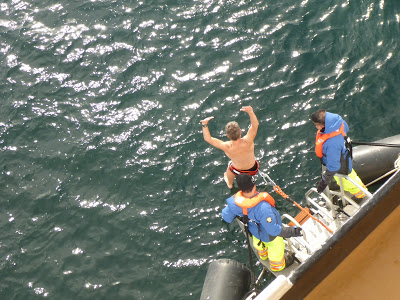 Why is it troubling for me?  Because I see Antarctica as a place to be embraced and this a special time in people’s lives to appreciate not only the beauty, but also the sensitivity of this fragile environment.  I have great difficulty with those who want to conquer it…not as explorers…merely for self-edification: Helicopters, heli-skiing, etc. especially in the small band of the continent where wildlife exists.  (Mountaineering is, in many ways, a different experience but that is a possible topic for another article as many of those who engage in this have a more personal relationship with the mountain and nature…especially where it does not interact with critical wildlife areas.)

Yes. Yes, I understand the concept of some activities creating a bond between nature and person in ways that are as different as the individuals engaged in them. And I acknowledge that the Polar Plunge did not in and of itself cause any harm to the environment. But, alas, I didn’t hear anyone say anything along those lines, but rather “I did it”.  Maybe I am overly sensitive, but any activity that gives a human the false feeling that they have in any way overcome the power of Antarctica (even if its waters, in reality, are no colder than the winter’s waters on the New Jersey Shore or Lake Tahoe, California) concerns me.

Just for a moment think back to the first whalers who – in a very brief period – felt they could survive in Antarctica…and then exploited it; nearly destroying seal and whale populations to the point that without economic intervention (lack of seals and whales making it cost-prohibitive and the discovery of alternative oils) the animals and even the now nearl prstine environment might well no longer exist. Or that one plastic water bottle that “wont’ do any harm”. Large or small, negative impacts in thought or physically add up.  OK, enough of that! 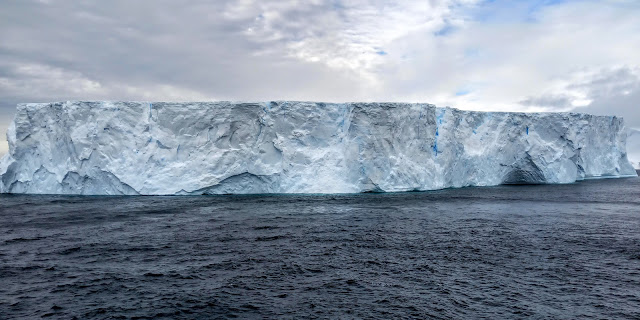 As we departed Paradise Bay the captain brought the ship pretty much right along side a tabular iceberg. It wasn’t the biggest or most spectacular iceberg I have seen, but it did bring a feeling that it was as close to a Titanic experience as I would like.  And, of course, for most of the guests it was very exciting and its beauty undeniable.

The next morning was going to be a new landing site for me: Dorian Bay.  However, as the Antarctic weather is unpredictable, the bluebird skies of yesterday gave way to clouds, colder temperatures and much stronger than forecasted winds; resulting in our landings being cancelled.  However, Captain Joost and the Expedition team did not give up and cancel the day, but rather were able to  relocate the Seabourn Quest to near Torgersen Island and the United States’ Palmer research station. (I did not expect views of so many Antarctic bases; that is for sure.)

As we arrived so did a pod of humpback whales, some bubble feeding right near the ship; and that is something you just don’t see every day…and a new one for me!  (It wasn’t something easily photographed, but most certainly remembered.) 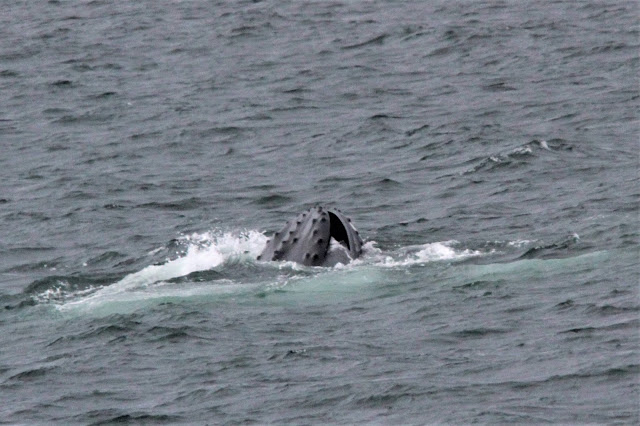 While most everyone was focused on the whales I observed a skua trying to get a kelp gull to give up its catch. It was an areal dog…I mean gull…fight that was just magic to watch.

That should have turned the guests’ disappointment of not making a landing into excitement to get into the zodiacs.  But shockingly that didn’t happen; for about half of the guests opted not to spend an hour touring the area…and area I have been to twice before.

Others observed humpback whales feeding right next to the zodiacs and others took in the magnificent glaciers as well.

I must pause and say I am not sure if made me angry, frustrated or baffled.  Those that didn’t experience this day have spent tens of thousands of dollars and traveled thousands and thousands of miles to get to Antarctica. Yet they decided it just wasn’t worth it.  But, alas, it was their loss and one they chose, so I only mention this in passing.  (Originally I had written above, “So what did they miss?” but I it didn’t properly express my bewilderment; especially because I had a great experience observing a Weddell seal, numerous Elephant seals, Giant Petrals, Adelie penguins and more.)

And then:  Our last day in Antarctica came; and it came way too fast. It seems like it all just started.  This expedition is the longest I have spent “on the ice” yet the time has flown by; giving me a feeling that I have somehow been cheated.  I needed – no, need – more time.  There are places I haven’t seen, places I want to revisit (like Neko Harbor and Peterson Island), more rocks I need to sit on, more animals to observe, more views to take in, more smells (even the guano)…heck, just more of everything.

But I have to remember three unbelievable days in South Georgia Island and six incredible days in Antarctica (noting that we were most fortunate to not have a single day cancelled due to weather). I mean who gets eight days like we had plus our last day, which was in one of my favorite places: Half Moon Island, Antarctica!

Half Moon Island has it all: Birds and Seals, Ansel Adams-esque views from one side and huge seemingly never-ending glaciers on the other, rock outcrops and snow.

I spent my time taking it all in; only stopping to take photos once in a while. It is a definite “Put the Camera Down!” kinda place.  But even doing that there was plenty I was able to photograph.

And when I was done, I headed back to the ship to get ready to kayak one final time.  This time we were lucky.  Our group was the last of this expedition.  As the one before us was cancelled due to wind and too much brash ice, as we headed out on the zodiac I wasn’t too confident it was going to happen.  And then…the zodiac engine broke down. But the Expedition Team was on it and within minutes we transferred to another zodiac and were off to an area that the kayak team had been able to clear just enough brash ice after the wind has subsided.  It was a quick safety briefing as most all of us had kayaked before and the concerns over the brash ice again closing in was real.

Ironically, my my kayaking partner had previously been my first ever Seabourn Ventures kayaking partner on Komodo Island, Indonesia during the maiden voyage of the Seabourn Encore.  Who woulda thunk? She is a wildly entertaining kayaking partner (or should I just say partner as she didn’t do much kayaking…because she is definitely not a “put the camera down” kind of woman). It was a very enjoyable and light-hearted time, which was fine as I don’t think anything could have topped my snow-globe kayaking earlier in the expedition.

That said we both truly enjoyed the two minutes when our guides Rob and Brandon had us raft up with another kayak, close our eyes and just be silent for two minutes so we could take in all the sounds, smells and water.  As they said it was time to open our eyes five chinstrap penguins came porpoising  toward our kayak. A wonderful moment to end my expedition.

But I wasn’t going to leave Antarctica on a somber note! I had arranged a small party in my Wintergarden Suite for my clients and some of the Seabourn Expedition Team as a Celebration of Antarctica and a thank you for all of them making this both possible and extraordinary.

In typical Seabourn fashion, though I told everyone that I didn’t need it to be “over the top” Seabourn made it so. Sashimi, caviar, lobster medallions, scallops, tempura prawns, spicy Szechuan beef, cheeses and more…plus some wonderful wines.

And with that, the South Georgia and Antarctica portion of this cruise came to an end and my depression and sadness started.  I must focus on the all of the positive energy, optimism and joy this expedition has brought me…and the fact that while the “expedition” may be over, the “cruise” had just begun as we sail toward Ushuaia, Argentina!

But there could be no way to better come to an end of this expedition by having a Drake Lake crossing and Captain Joost making a special detour to Cape Horn…while I dined at The Grill by Thomas Keller!

Interested in booking a Seabourn cruise to Antarctica or elsewhere? Please give me a call, drop me an email or send me a Facebook message!