The Goldring Travel 2017 Culinary & Cultural Cruise aboard the Seabourn Encore left Gibraltar and headed to Malaga, Spain and another Private Goldring Travel Event:  Making Tapas.  And that was followed by Eating Tapas in Cartagena, Spain!

This is the first time I have arranged a cooking class (as our Ensemble Travel Experience), but this was no ordinary class…especially after our adventure in Tangier, Morocco purchasing most all the ingredients I and Michelle Shea (our Adventure Dining Guide chef) needed to cook a Moroccan feast only days earlier.  This time we had two local guides take us into Malaga’s market to purchase ingredients, but this time:  My guests were going to be the chefs!

After wandering the market (with me, of course, picking up a few things for a later event!) we, bags in hand, headed to Labratorio de Sabores (Laboratory of Flavor), where we met up with our  wonderful and charming “grandmother” chef who guided us through the making of four different tapas:  A fresh Gapzacho, Meatballs in Almond Sauce, Pil-Pil Prawns and Tortilla (a Spanish potato omelette).

But first we needed wine and beer (just open the refrigerator and enjoy…which always makes cooking more fun!) before we started to grate tomatoes.

As our “grandmother”, I mean chef, did not speak any English our guide was our interpreter, but as both were so charming it just added to the experience…as you will later read.

We then made (OK, for this one the chef pretty much did the hard work) gazpacho.

It was then onto making meatballs and potato tortillas

This was followed by Pil Pil Prawns…nice and spicy. And while I was cooking away, “Grandma” made sure she gave me a hard time, always criticizing me with a bit of a twinkle in her eye.  I think because she could tell I knew what I was doing!  There is no messing with the chef, but clearly messing by the chef!

With the cooking done, it was time to sit down and enjoy our culinary creations.  Honestly, I did not know if this would be enjoyed by everyone, but literally everyone had a great time and, of course, were, to the surprise of some, culinary masters!

Grandmother was not, however, done!  As everyone was turning in their aprons, she pulled me over to the side and told her son to give me a jar of her ground chili (used in the pil pil prawns) as a little gift.  Even more special was her grandmotherly hug and kiss on the cheek.

To be sure this was not merely a cooking class in a ship’s culinary center, but a true cultural experience!  This had less to do with learning to cook as it did with cultural immersion.

After heading back to the ship it was time for a Private Galley Tour with Chef David.  It is always interesting to me how each executive chef explains the galley operations as each one perceives things and talks about it differently.

I always make a special note that while our private galley tour was at 4:30 p.m., the galley is quiet.  That is because on Seabourn every dish is made a la minute; as it is ordered.  It is part of the reason a Seabourn guest’s special ordering modifying menu choices is not only possible, it is expected.

Our Tapas Immersion continued the next day in Cartagena, Spain.  I, along with two friends, took a walk along the charming marina to La Rambla and then to visit the Roman amphitheater and surrounding areas.  OK, we weren’t really planning on “the surrounding areas” but we got a bit lost.  It was good to see more…and better to finally find our way back to La Rambla! 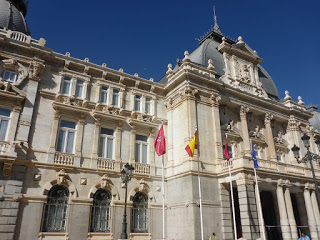 It was, however, now time to find a place to enjoy some local food.  As I normally do, I just find a place.  This time we wandered down a fairly austere walkway with couple of tables and a blackboard sandwich sign outside a doorway.  I turned to my friends as we approached, skeptically noting the sign said “Spanish Tapas”, like there was any other kind.  Fortunately, we decided to peak in the door and we instantly knew this was “The Place” for tapas:  El Barril del Tapeo (literally meaning The Tapas Barrel).

We saw so many delicious looking tapas we didn’t know what to order so, in true Goldring Travel fashion, we pretty much ordered everything..and local beer! 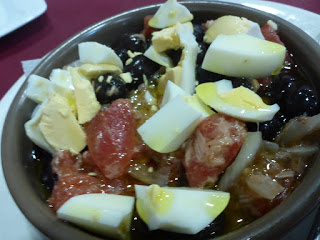 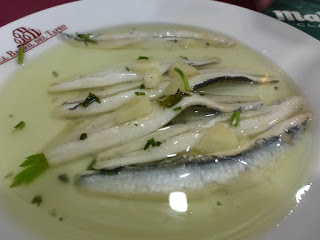 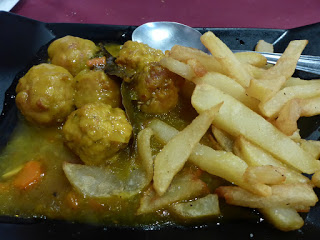 The apparent owner of the restaurant, who spoke no English (and we had only a little Spanish between the three of us) came over playfully making fun of us for ordering so much food.  When I motioned I was so full, he repeatedlyl made a motion I couldn’t figure out…and then we did.  He was saying “Stand up fatso…so the food settles and you will have more room!”

Our new friend brought out a bottle of a yellow-green liquor in a Gran Duque de Alba brandy bottle.  We don’t know what it was and two of us thought we only had one shot of it, but later recalling our day one of us remembered we actually had two.
Wanting to be nice to our new friend, we asked, pleaded and then begged him to have a drink with us. He slyly refused again and again; insisting that he doesn’t have lunch until 3:30 p.m….
And then he said he had something else for us to try:  A white smooth liquor that pretty much finished us off.  Of course, I later did some research and what is in the bottle shockingly was not what was originally in there (which is a bright yellow herbal liquor).
It was then time to head back to the ship for a traditional siesta!
What is the difference between a Food & Wine Cruise and a Goldring Travel Culinary & Cultural Cruise?  We focus on meeting people and embracing the culture of the places we travel rather than having the sanitized experience of merely eating the food from places we have visited.
Interested?  Give Goldring Travel a call, email or Facebook message!