The final leg of my third Antarctica and Patagonia journey on the Seabourn Quest started with a “Drake Lake” crossing arriving into Ushuaia, Argentina on time. But it was Sunday with a 1:00 PM departure so there was virtually nothing open and no opportunity to enjoy a bit of Argentinian cuisine before our journey into the Chilean fjords and Patagonia.

We tied up to the pier along with Ponant’s L’Austral, the Hanseatic Nature and the old Albatross Expeditions Ocean Atlantic.  The luggage on the pier for each of these ships reminded me that coming all this way for a much shorter experience, and with not near the luxury, is not what I preferred…and that I still had over a week more to enjoy the Seabourn Quest!

What I was able to enjoy was my first long walk (about 5 miles), including up the hills of Ushuaia, which was refreshing and well-needed. 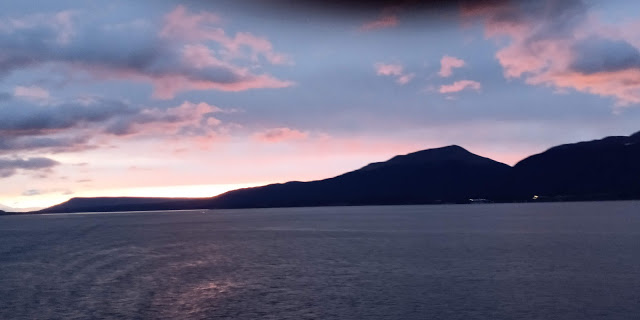 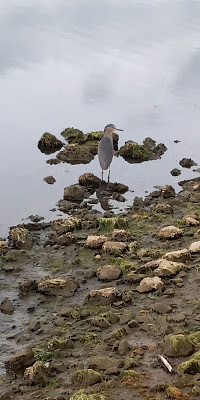 As I wondered the town, I came upon the Dublin Pub, where I had a very “enjoyable” evening two years ago with some of the crew and Expedition Team.  I saw a sign that said “Open”, so I approached closer. I saw a chalk sign that said “Open” so I got right up to the locked front door. Alas, the 17:00 opening time in the ghost of chalk past hardly showed…and my excitement for a bit of luck turned to disappointment.  Oh well.

It was quickly time to get back onboard and for our cruise; not expedition, to continue.

Monday brought us to Punta Arenas, Chile and my time to host the Ensemble Experience which I called, “Shearing Sheep and then Eating Them”!  Well, actually it was a walking and driving tour of the city and then a drive to a small show estanzia (or farm) where we had a bit of a walk followed by a sheep shearing demonstration, a tasty llama empanada and a pisco sour, and then a barbecue of lamb (get it?), beef and chicken.

Making it more interesting was not only a great guide, but two of the Seabourn Expedition Team came with us. 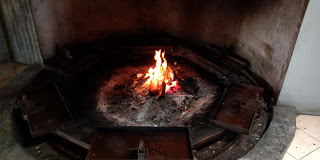 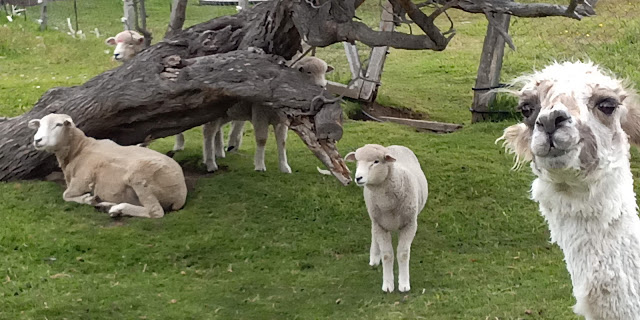 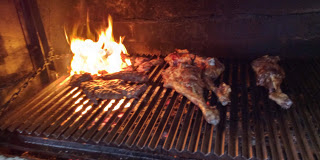 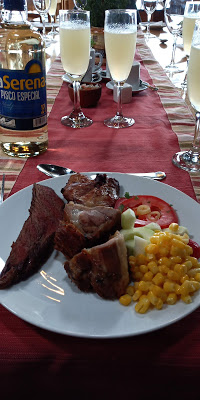 After lunch some of the guests returned to the ship, but some of us headed into town and another pisco sour at the famous Shackleton’s Bar.  As we walked another member of the Expedition Team joined us. And immediately after I posted on Facebook that I was there, Trevor Potts – who recreated Shackleton’s Journey messaged me and then stopped in, then Rob Egelstaff stopped in and then another member of the Seabourn Expedition Team came by.  Of course we enjoyed pisco sours!

While some went off to shop and others to take the shuttle back to the ship, Rob and I enjoyed (as we did last year) a nice four mile walk along the coast back to the ship.  As luck would have it, just as we arrived the skies opened. Whew!

It was then two sea days or, better, days both wondering through the fjords and inlets of Patagonia coupled with some hours in open ocean.  Because the seas were predicted to be quite rough (false alarm fortunately) Captain Joost took a very creative and beautiful meander that had not been done before. Hopefully Seabourn will do this in the future as well.  It was far more picturesque and enjoyable than open ocean. 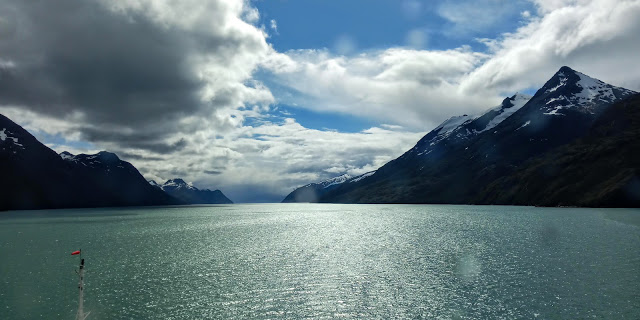 Our day in Castro, Chile was, as it was again my third time there, focused on one place: Mercadito; a small rustic restaurant which has the best frozen pisco sours, fresh oysters that are almost clam like, and other deliciousness like a seafood soup. 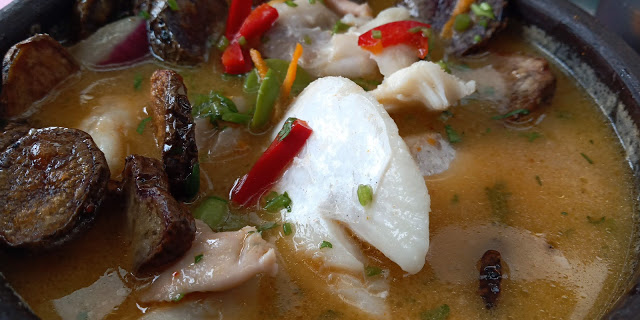 It was also time for me to give the Seabourn Expedition Team a bit of a Thank You…which allegedly caused the restaurant to run out of pisco.  That’s their story anyway!

After finding another little restaurant for that last pisco sour that nobody actually needed, it was time to catch the last tender back to the Seabourn Quest…and none too soon.  What a fun day!

And while it was a great day, our final port of call was only a few hours later: Puerto Montt, Chile.  Here is where I was scheduled to meet up with my friend and guide, Maria, owner of Patagonia Trails.  Maria invited me to visit her new homestead with views of the Osorno Volcano and which, after hiking through gorgeous fields of wheat, backs onto a national forest…and then a hazelnut orchard. It was worth getting up at 6:00 AM to make the first tender to shore. (OK, I made the second tender, but let’s not quibble about that. It was a strong showing after Pisco Day. LOL). 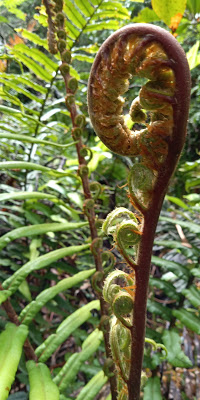 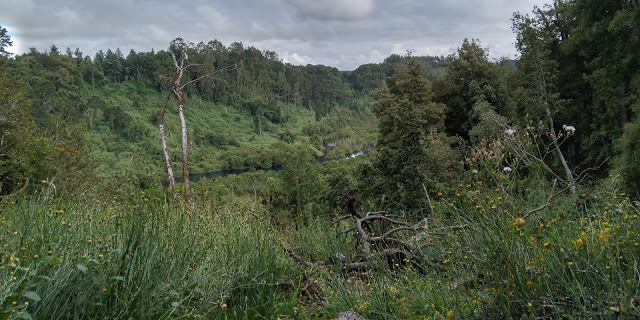 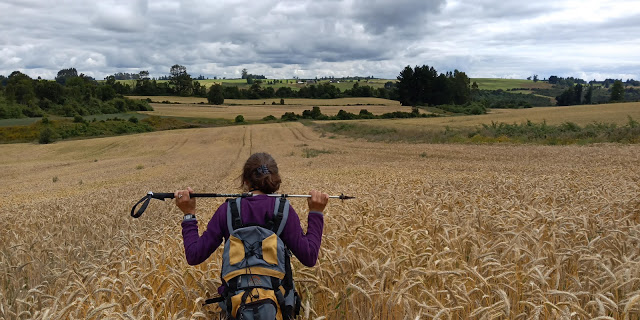 This was a most unexpected, but beautiful and refreshing hike…and much needed after so much time on the Seabourn Quest.

After the hike, tired and muddy, but very happy, Maria dropped me off that the old market so I could take a quick look around before heading back to the ship. I wish I had some Chilean pesos so I could again sample some of the seafood, but I think I was too tired to find an ATM and, of course, the Seabourn Quest was departing shortly and I only had an hour to wander and catch the last tender. 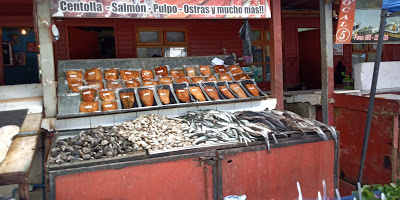 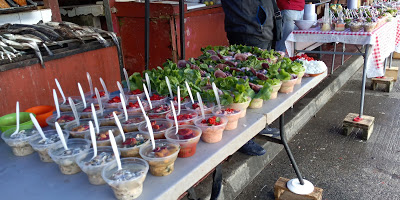 It was then back on the ship in time for my second Hamburger & Hot Dog Test.  Consistency is important, right??  Once again I found that you need to “order down” one temperature to get what you want. So if you want a medium rare burger, you should order rare. After a few cruises I find this definitely works.

It was then time for the Seabourn Classic Caviar Sailaway (postponed from earlier in the cruise). It is something many of the guests enjoy, but for me I don’t get why one wants to wait in line to be served caviar when you get have it on request anywhere you want on the ship at any time.

Speaking of which, that night was the last formal night, but after the last hosted table I sat at had some “difficult” tablemates and I had just relaxed after my wonderful hike, I gave it a miss.  I did wander about in a jacket and slacks, as is appropriate, and did have some caviar and potato chips at the Observation Lounge…having my own quiet Seabourn Caviar sailaway!

And then it was the last day; a sea day.

It was also time to pack up after 24 days on the Seabourn Quest and almost the end of this phenomenal adventure.  One last dinner; a wonderful evening with Hotel Director Ares and Expedition Leader Srigley and then an after dinner cocktail with some of the Expedition Team.

The next morning it was time to disembark, saying so many “goodbyes” and “No, I can’t stay on for the next cruise too”, I also said a number of “hellos” to staff and Expedition Team members I passed leaving the terminal that were just arriving to embark on the Seabourn Quest that morning.

And then… I had arranged a Bird Watching Tour with lunch for myself and four of my clients through the usually very reliable Tours By Locals.  Our guide met me and the first words out of his mouth (after Hello) was that there has been a very long drought in the area we were going so there won’t be many birds. Huh? Seriously? Now is when you decided to tell me this?  How about you don’t offer a bird watching tour without birds? What an innovative concept.

The good news is that he showed up and the van was new, clean and appropriate to handle all of us and our luggage.  It was then a pleasant hour’s drive to El Yali National Park; which neither our guide nor our driver exactly knew where it was or, once there, where the park office was.

When he said he had been there about five months ago I knew things weren’t going to get better, but kept a smile and a scintilla of hope.   When we slogged through volcanic sand and he ignored the few songbirds we had seen along the way, that little hope was dwindling.

We eventually found ourselves on the beach; not exactly a hot bed for birdwatching, so after a stroll down the beach our guide had an alleged shortcut. After wandering back and forth along a barbwire fence separating horse paddocks there was only one thing to do: Crawl under the barbwire. Yep! You got it! An expensive birdwatching tour without birds got worse.

And when we got to the “wetlands”, which was actually a tidal pool (at low tide), there were but a few birds in the distance with our guide not making much of any effort to identify them either.

It was then time to call it “quits” so it was over to an old path in a horse paddock to another locked gate and, again, crawling under yet more barbwire.

It was the, fortunately, time for lunch…and as disappointing as the birdwatching ordeal was, the lunch was equally…BETTER! 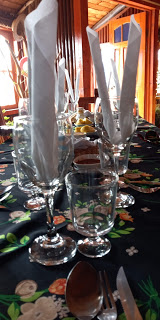 We stopped at a small restaurant, Parador Turistico El Yali on our way into the park and was given a choice of beef soup, chicken breast or fish.  Upon our return we had an amazing lunch.  As you may know I am a huge fan of soup and what appeared was a giant bowl of beef soup deliciousness!

The chef and owner was very proud to tell us – with our guide interpreting at points – about how he made the beef soup, which was filled with local potato, corn, rice, carrots and more along with a giant bone-in portion of super-tender beef.  He then went to show me photographs of him with, apparently, famous Chilean people who he has cooked for. (My Spanish, especially with his dialect, just couldn’t keep up at all!)

He then took us for a short tour of his small farm (and this meal was truly “farm to table”; actually more like just “farm”). He had a little bit of everything: Chickens (eggs and meat), peaches, apples, melons, herbs, etc. And you would have never known this if you didn’t take the time to look.

Truly enjoyable and a moment of refreshing simple life. 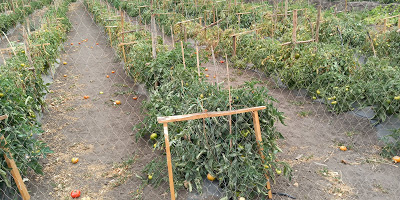 It was then a two hour ride to the airport…and my turn to deal with LATAM. Ugh.

Fortunately, my bid for an upgrade to Premium Economy was accepted ($130), which as I figured it was only $30 more than what it would have cost me to check my luggage. A definite win!

After being told by LATAM they could not check my luggage through to Tahoe, I called over a supervisor and it was done and with no charge for anything. A win!

And the aircraft did not, as my arriving flight did, have ashtrays in the armrests, but rather it was a 787. Another definite win! 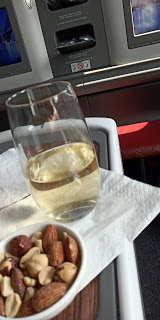 The only downside was that LATAM changed the departure time to two hours earlier so I had a 6.5 hour layover in Lima, Peru before boarding my United flight to Houston.  Juggling my Star Alliance Gold status for entrance into one lounge and my Priority Pass through American Express Platinum for another I was able to spend all of my time in two lounges (conveniently next to each other), including grabbing a bed for a couple of hours of sleep and a truly needed shower (remembering the birdwatching fiasco).

When I finally got home, after 30+ hours of travel, I received a Facebook message from someone on the Seabourn Quest, “Eric Goldring come baaaaaaaaack“.

Oh, I intend to. Antarctica does that to you.

Interested in experiencing Antarctica or any Seabourn cruise or just want to ask me a question? Give me a call, drop me an email or send me a Facebook message!