I was up early for the sail up the Gironde River to Bordeaux, France.  While it started off cold and dark, as the sun rose it warmed and was quite enjoyable…and beautiful. 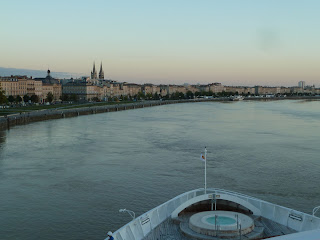 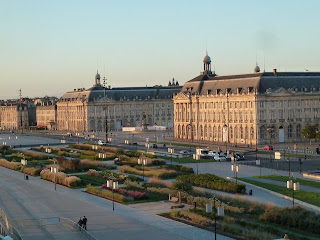 I had been to Bordeaux back in 2006, but this is a newer, fresher and more lively Bordeaux.  From the tram to the renovated promenade along the river to the freshly replanted green spaces to the incredible number of sandblasted clean buildings and new pedestrian walkways, my time here has made it one of my favorites. 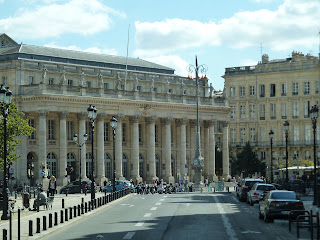 After docking right in downtown (a great benefit of sailing on a Seabourn yacht), a few of us ventured over to the flea market to see what the locals were doing on an early Sunday morning. (In Bordeaux Sunday morning is not exactly the hotbed of activity.)  It was a lot of fun seeing what was available from beautiful old chairs to ratty stuff foxes on this wonderfully sunny day while wandering through the local folks.
And then there was a “moment”.  A group allegedly from northern Portugal arrived in traditional dress and with traditional instruments.   Their leader began talking as the rest started some traditional dances…and then my wife was pulled out of the crowd to dance with them. It was quite funny; especially as she was spinning to the left as they all spun to the right!  (I am still trying to get permission to post it on YouTube, but I think my desire for marital bliss far outweighs the consequence of doing it without her permission!) 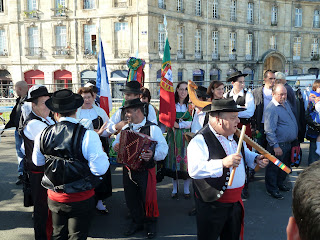 After that it was a leisurely coffee and walk around downtown Bordeaux.  What a huge difference from a few years ago.  So many of the buildings have been cleaned.  There are more pedestrian walkways.  The architecture in this still sleep city just started to jump out at you. 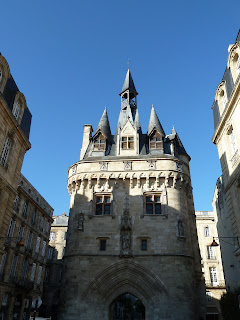 Back to the ship for a quick lunch and it was time for the Ensemble Travel Group Ensemble Experience.  And to be sure it was a wonderful experience. It began with a city tour including about 45 minutes of walking, but with a twist.  Aside from the “Oh that what that beautiful building is we saw this morning” (at least for a few of us) it was a study in the architecture of balconies.  Who knew it could be so fascinating?  I have no idea how the financial side of things have worked, but it seems everyone loves the mayor and the results in a very short period of time show he has vision. (Honestly, while spending three days in St. Petersburg, Russia may be needed to explore all the museums, three days in Bordeaux is needed just to enjoy this fantastic city.  But I digress. )
After our city tour it was time to drive into the Right Bank to Chateau Camarsac, a 700 year old chateau and castle. With its vineyards literally ripe for the picking (yes it is harvest time in Bordeaux), a clear blue sky, and the most charming of hosts, it was a fantastic afternoon. 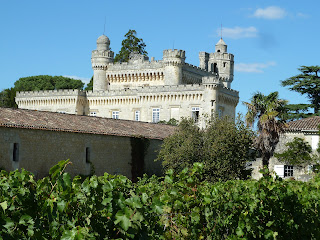 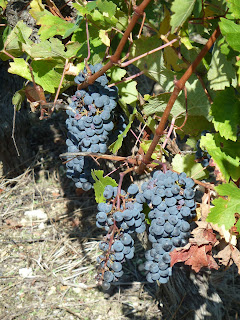 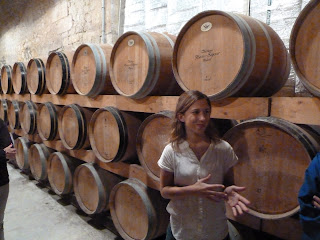 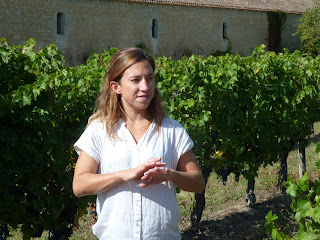 We walked through a bit of the vineyard, tasted some of the grapes as they process of winemaking was described and then walked into the former horse stable to find the owner and his wife, splattered with grape juice, turning over some of the earlier harvested juice.  He stopped what he was doing and explained the process to our group with a smile. 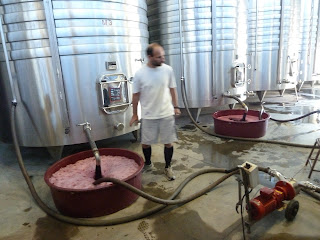 It was then time to “storm the castle” for a wine and cheese tasting.  But before the tasting we were shown a few rooms, including a hidden staircase formerly used to climb the turret!  Legend has it that the castle was either built or funding by “The Dark Knight”, his armor oversaw our tasting of a very nice white and red Bordeaux wine. 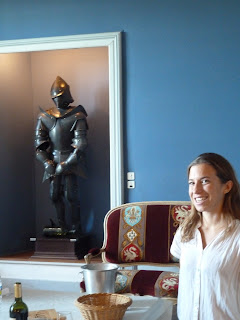 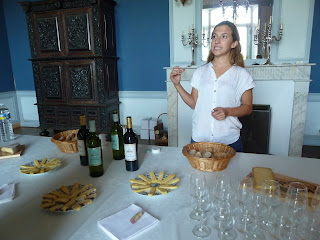 But before we left I did pick up a couple of bottles of Camarsac’s 2009 red Bordeaux which was awarded a 91 by Wine Spector…one for the Goldring Travel Food & Wine Tasting on the last day of the cruise…and one for my wine collection!
Arriving back at the ship, we relaxed and waited for our al fresco dinner at the Sky Grill overlooking a beautifully lit up Bordeaux.  Nigerian shrimp and filet mignon were wonderful (as was the service), but the views of the city were the highlight. 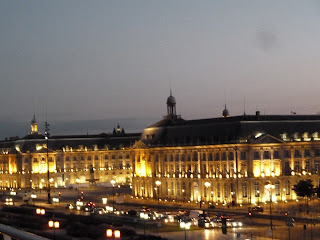