I arrived in Copenhagen, Denmark they day before the startof the 2015 Goldring Travel Culinary and Cultural (Food & Wine) Cruise on the Seabourn Quest.  I always look for a unique hotel in an interesting location to stay at.  So while I booked some of my guests into the SKT Petri, a lovely hotel with great friendly service and very comfortable rooms, I opted for the Axel Guldsmeden, a boutique, environmentally friendly, hotel located in the trendy former meatpacking district.  From the friendly service to the beautiful stone bathtub in the bedroom to the wonderful garden lounge, I enjoyed our brief time there.
After checking in we headed over to Tivoli Gardens for a stroll, a bite to eat (pickled herring with a cauliflower salad and smoked eel with a light mustard dill sauce – typical Danish cuisine) and a sampling of aquavit – the very potent potato based, but herbal infused, Scandinavian liquor.  (I had to prepare for our aquavit tasting later during the cruise.) 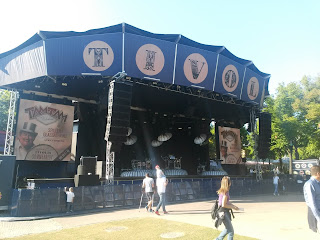 But the highlight for me was later that evening dining at Formel B, a Michelin starred, dining experience.  I had tried to get into Noma, having entered the lottery and waitlist months earlier, but to no avail.  I was not, however, disappointed.    Formel B, was an upscale, but casual, experience that impressed from the moment we were seated at a table highlighted by dozens of bottles of golden sauterne set in a stone wall. 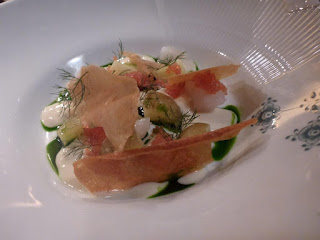 Each dish was beautiful, but I think the “winner” was Danish beef jerky with white asparagus, parmesan, crispy malt and yoghurt; almost a play off a Turkish donner kebab.  It was like nothing I expected, but I will remember that melding of flavors with unexpected textures for a very long time! 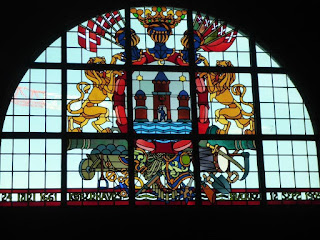 The next morning we headed out to explore just a bit of Copenhagen.  I do have to say that overall I was a bit disappointed.  There are some beautiful buildings and interesting cultural moments, but between some rather ugly buildings and giant McDonalds signs, litter and the smell of urine in far too many places, I felt like I was back in Amsterdam in the early 1980’s before they got it together.  But all was not lost!
We strolled over to the train station, a very interesting building, and found a nice bakery where I indulged in a rye and chocolate pastry that was delicious. 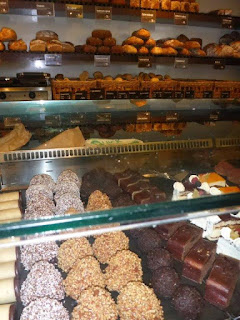 After walking through the Royal Palace stables, City Hall and the rest of the touristic areas (stumbling upon a very interesting exhibition The Lapidarium of the Kings at Christian IV’s Brewhouse) 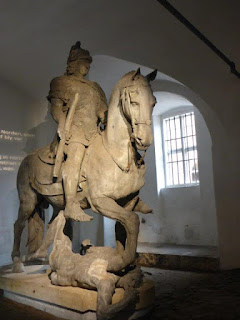 it was time to head to the Seabourn Quest. A short taxi ride from the hotel brought us right to the pier.
It was my girlfriend’s first time on Seabourn, having spent the last 1.5 years and five cruises being told, when I compared the experiences of Cunard, Azamara, Windstar (sail and power) and Celebrity, “But on Seabourn…” She said, “Well let’s see if Seabourn is that good after all of your hype!”  To which I replied, “It is not hype.  It is Seabourn!”  And with that a white-gloved steward greeted us and took our carryon bag onto the ship for us and, upon boarding the ship, she was greeted by name.  Our bags stored for us since our suite wasn’t quite ready, we headed to the Patio Grill and enjoyed a relaxed champagne and sautéed cod lunch.
At 1:45 p.m. it was announced the suites were ready.  As with my last cruise on the Seabourn Quest I am in one of the Spa Penthouse suites. You can read more about them here. Besides my believing them to be the best suites on the ship, the views traveling through the Norwegian fjords should be spectacular…and I plan on holding a special food and wine event for my guests.
With long travel distances we were underway at 4:00 p.m. for 1.5 days at sea.  Afterwards I was able to catch up with my dear friend, Captain Geir-Arne Thue-Nilsen, who will be the captain of the Seabourn Quest for the first few days.  (We had a lovely private lunch with Captain GA in his quarters during our first sea day – with a spread that was as beautiful as it was delicious – catching up on things and watching some of his fantastic videos.  You can find quite a few on YouTube with such cool things as his Antarctic experiences, wild thunderstorms, his runaway drone and more.)
I also had a few moments to catch up with Seabourn’s resident naturalist and exploration expert, Robin West, to begin our chats about the new Ventures by Seabourn program, which consists of a number of zodiac and kayaking experiences.  I will talk much more about this as I will be “testing” the zodiacs in Nordkapp (the most northern point of Norway, above the Arctic Circle) and may try a bit of kayaking in Olden, Norway.
It was then time to start making my arrangements for our group; delivering the 2015 Goldring Travel Food & Wine jackets to their suites.  This year’s jackets are my favorite to date; taking into account the cooler temperatures and propensity for rain in the Norwegian fjords.  I also arranged for a meeting in the morning with Executive Chef Jes Paskins, whose enthusiasm and energy for the upcoming two week cruise is fantastic, and Julian, the Food & Beverage manager, who has assisted me on a couple of prior cruises.
It was then time to relax and enjoy dinner and my girlfriend (trying not to be impressed) took a bite of a Seabourn breadstick and said, “It’s a breadstick.  What’s the big deal?”  Suffice it to say, when the waiter brought the third glass filled with them, she begged for them to be taken away because she couldn’t control herself.  And then the wine waiter offered the day’s complimentary pour, which was not to my liking, so I asked if they had one of my favorites and it quickly appeared.  With a beautifully prepared and presented dining experience, my alleged “hype” about Seabourn was quickly becoming a wonderful reality…in less than a day!
Day Two started out with a beautiful sunrise and then an al fresco breakfast in the Colonnade overlooking the ship’s wash:  Two perfectly poached eggs and lamb chops.  It was then time to work with a number of meetings and telephone calls putting the finishing touches on what will be a busy two weeks of Goldring Travel Cultural & Culinary (Food & Wine) events:
It was then time for our first Formal Night.  Unfortunately, Captain Geir-Arne would have to cancel as our arrival into the fjords heading to Flam, Norway required him to be up extremely early to meet the pilot. Dinner was, of course, delicious…though it was a bit unusual to have the curtains drawn as dessert was being served at 9:45 p.m. because the sun was streaming into The Restaurant.
Interested in the 2016 Goldring Travel Cultural & Culinary Cruise on the Seabourn Quest? Want more information on the Seabourn Spa Penthouse Suites?  Interested in Seabourn’s breadsticks?  Drop me an email at eric@goldringtravel.com or call me at (877) 2GO-LUXURY or +1 732-578-8585.