I need to take a moment to discuss “travel”.  Since Bonafacio SeaDream Yacht Club’s
SeaDream II has been to Calvi, Corsica (not a great port), Monaco and Portofino
(a great port…read on), but today we are in Portoferraio on the island of Elba.  (Our itinerary has changed, eliminating
Portovenere/Cinque Terre, due to heavy swells…a disappointment).
Rather than staying the rather depressing
port of Portoferraio we take a 20 minute taxi ride to Porto Azzurro (more on the port
later). After our walk we find all the good restaurants are only
open for dinner, so three of us are sitting at a quayside restaurant and are
presented with a basket of stale bread.
It is an insult.  We are American tourists.  We are offended.  It is not good.  Or is it???
I now regress.
Our second port is Calvi, Corsica.  It is not a port of any real interest.  You know if there is something in town worth
finding I will sniff it out, but I am at a loss.
So I am back on SeaDream II within an hour.
Aside from the two hour nap that I never take, I now have a
good feel for the ship and its staff.
There is no question that by the third day I feel at home.  The staff has figured out that while I like
to be pleased I also like to be teased.  They
sense when I want to be left alone and when service is needed…always with a
genuine smile.
In the evenings I like to drink Glenfiddich on the
rocks.  Being outside in the summer the
ice tends to melt a lot fast than I consume the whiskey…which I use as an
excuse to drink slower than some others.  Michael has it figured out.  He asked me if I would like more ice; not
another drink…unless, of course, there is almost nothing left in my glass.  (As you may have read, Silversea’s inability
to provide this sort of service – no less on a consistent basis – was a real disappointment.)
So while you know I am impressed and enjoy the service, many
of you have asked how the cuisine is.  It
ranges from very good to excellent, but is always creative and enjoyable.  It doesn’t matter if it is a Caesar salad
with anchovies or escargot with a gratin or osso bucco (properly prepared, so
it not just the name of a dish) or Dover sole or lobster, there is always a
subtle twist.  I, and the other guests,
really enjoy the surprise to the cuisine.  I have not had a disappointing taste on board…not
one. 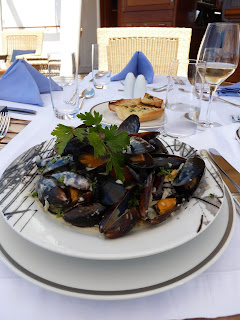 I mention to the chef when we are heading to Portofino that
I love a local pasta called trofie with pesto I find he added it to the menu…with
truffles!
I wasn’t going to have breakfast, but my friends said, “You
have to try the French toast”.  So – to be
polite – I did.  It wasn’t your ordinary
French toast, but rather a thick, but light, grain bread with a light nutty texture…even
with maple syrup.  Who knew?!
Chef Tomasz Kozlowski explains to me that there are no set
menus, though there are regular or consistent items.  Because of the small galley staff there are
no assistants, so everyone must be on their game, so with the flexibility of
the menu comes a heighted responsibility to assure everything leaving the galley
(which is almost always cooked ala minute) is prepared, seasoned and presented
at a very high level.
I will have more to say about the cuisine after the last
night’s Degustation Menu, which will be served in the main dining room.  There is necessarily a definite difference in
menu and presentation when dining al fresco versus in a dining room…so stay
tuned.
After Calvi we cruised to Monaco which I used as a lazy day,
but one to really take a good look around the ship.  Even though she was built in 1985 and shows
her age here and there, when something is painted, it is painted well.  If something is repaired it is repaired
properly.  In fact, I am impressed that
the water pressure is excellent, the water is clean and hot water is not an
issue.  (I am told virtually all of the
water lines have been replaced with modern, plastic, lines…which is the wave of
the future… and the water-making equipment is brand new.)
But make no mistake, this is not a new ship.  The cabinetry in the staterooms show a bit of
age, no matter how well maintained, but everything functions well.  One will quickly and happily remember that “It
is the software (people), not the hardware” that matters most on SeaDream Yacht
Club.
Sailing out of Monaco is my night to enjoy the SeaDream
Yacht Club Sleeping Under the Stars on one of its Bali beds.  There is no question that the one on the bow
is “prime” as it is secluded, quiet and receives the best breeze.  If you can get that one, do it.  My bed was the only one on the starboard side
aft with three others being made up on the port side.  (SeaDream II obviously got the memo that I
snore loudly, so it made sure I was alone…and separated from the innocent
others by the ship’s funnel!)
It was a nice experience, but honestly it is not for
everyone.  If the bar is open late you can
be disturbed.  (I grabbed my headphones
and some music seeing the situation.)  If
the ship is moving slowly (as it did in my case) you can get a whiff of the
exhaust from time-to-time.  (This would
not be a problem if there is any distance between ports, but on this cruise
they are all close together.)  At 6:30
a.m. I heard the staff setting up for breakfast…but then the next thing I knew
it was 7:30 a.m. and I felt well-rested.
I needed that restful sleep for our next stop:  Portofino; the picturesque Italian port.  However, today is not set for “the beautiful
people” but rather a 10 kilometer hike right up the mountain and ending in
Santa Margherita.  It was a real hike,
but well worth it.  Besides being great
exercise, the views were fantastic and our guide was energetic, experienced and
charming. 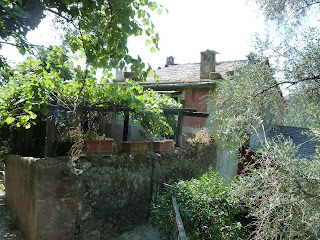 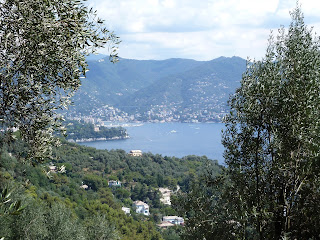 But it almost didn’t happen.
You should appreciate that SeaDream Yacht Club has a
definite focus on those wishing a more active experience.  When at anchor the complimentary wave
runners, sailboats, kayaks, water skiing and trampoline are offered alternating
with time for swimming.
Interested in bike riding?
There is a small fleet of high quality touring mountain bikes which you
can take yourself or join a complimentary bike tour headed by the activities
director or the captain.  Those bike
tours range from a casual scenic ride to very serious, challenging, expeditions
that will leave even the most fit with burning thighs. 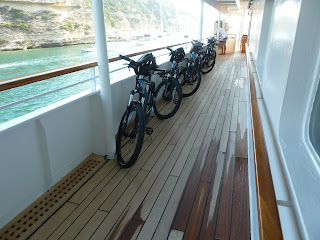 SeaDream Yacht Club also offers a small variety of additional
cost tours ranging from very low key to very active.  The hike from Portofino to Santa Margherita was
one of them.  Unfortunately, I was the
only one to sign up for it.  I am told 48
hours prior that it won’t be going.  I
mention this to a couple and they said they would love to take the hike
too.  So I ask the concierge, Kathrin, if
we could hire the guide directly.  Rather
than the standard cruise line “No!” I received the SeaDream “Yes”.  I asked if we should pay the guide
directly.  Silly me.  SeaDream had it all taken care of.  As the group increased to five people, they
did the accounting directly so nobody has to worry about collecting funds.

As our hike finished in Santa Margherita one’s initial impulse
would be to purchase its famous pinot grigio.
Not me.  I wanted to purchase what
the locals drink which I found out was Vermentino and Pigato grape based
Riviera Ligure di Ponente.  So with a bottle
in hand along with 3 bags of dried trofie we take the 6 Euro/15 minute ferry
back to Portofino.  We have touristic,
but nice, lunch at Del Fino (The Dolphin) with a perfect view of the beautiful
people…and a good number of tourists before heading back to the ship.
A soak in the hot tub was, unfortunately, interrupted by the
Norwegian toddlers that the parents/grandparents have let pretty much overtake
the swim deck when they are present.
SeaDream has done a great job with segregating them during meals, but
the parents and grandparents need to do their jobs and not have SeaDream Yacht
Club be the babysitter/children police.  Overall
the Norwegian family’s children have not been too much of an aggravation for
me, but for those that live by the pool the opinion is quite different.  If SeaDream Yacht Club failed anywhere on this
cruise, it is with how the children (and their parents) have not been told, “No!”  (SeaDream has even tried to create a Kid’s
Club to move them away from the other guests, but it isn’t enough.)
Rant over, a wonderful lobster dinner was followed by
SeaDream’s Dessert Extravaganza poolside.
It was nice but not really my style.
But with the Top of the Yacht Bar closed for the evening, it was time to
join ‘em, rather than fight ‘em, before calling it an evening.
The problems I have mentioned are like the stale bread I
mentioned before…
Back now to Portoferraio.
We find an old Italian taxi driver that tells the fare to Porto Azzurro
is 38 Euros.  We get in his taxi and are
greeted by a sign in four languages, “I am an honest Italian taxi driver”. He
points to the sign and says, “Impossible!” with a laugh. 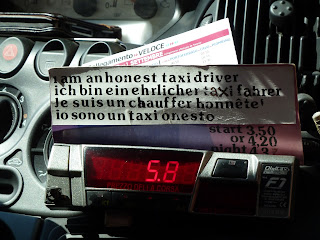 As we are driving I hear a harmonica…and then
a familiar tune…and then THE voice:  Bruce
Springsteen.  My friends speaks Italian
and they start talking.  The taxi driver
exclaims he has seen Springsteen ten times and he likes him because his
grandmother is Italian.

So with the Jersey Shore serenading us we arrive at a very
pretty Porto Azzurro.  We wander the town
and stumble upon a sign for a ceramic studio.
I follow a small path through residences to a garden/studio where we
meet Talo, the gray and wild-haired, slight, elder artist who has combined
Italian and Japanese Raku techniques.  I
buy a memento.  (Now I just need to get it
home!) 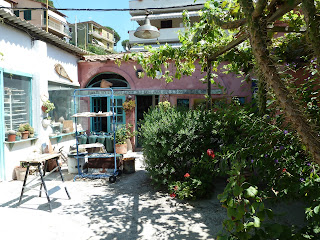 Oh, yes, back to the restaurant!  After the stale bread was removed for fresh
bread, nice local white Vermentino wine was brought to the table along with a
seafood feast of local fish, swordfish, squid, octopus, mussels, clams, prawns
and langoustine. Porto Azzurro provide us with a fantastic lunch and we are
picked up by our Springsteen loving taxi driver for the ride back.  Oh, yes, it was 38 Euros each way.
Back on the ship my friend says he wants to go off the ship
to get an espresso as the ship’s isn’t really to his liking.  The best place, we are told, is next to the
taxi stand.  Our taxi driver is there…and
buys us espresso! 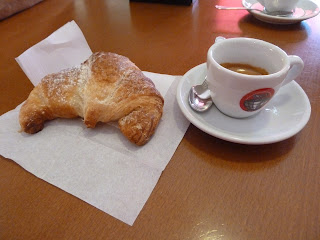 We had a great day with a Springsteen loving Italian taxi
driver, a wild-haired Italian artist, a beautiful port, a great seafood lunch
and SeaDream II…or we could focus on the stale bread (or a few children whose
parent/grandparents should be ashamed of themselves).
I’m without question focusing on another great day on
SeaDream II!