The first “official” day of my Avalon Waterways’ Myanmar journey started with breakfast at the Sule Shangri-la Hotel in Yangon.  It was a typical, high quality, breakfast with Western, Asian and Indian hot and cold offerings.  While nicely presented and prepared everything was definitely prepared to offend no one (also known as bland).  But, alas most of those who had breakfast enjoyed it.  (Note:  It is possible upgrade to the concierge level and have a similar breakfast served in its private lounge, as certain guests chose to do.)
Our group of 14 finally became a group for our 8:30 a.m. departure on an 24 passenger, air conditioned, bus with our guide, Myo, as well as a driver and assistant.  As we drove the short distance Myo began his explaining various aspects of Myanmar government, culture, traditions, etc. which continued throughout the day and will during our trip.  He gives a good amount of information, in short sessions, and without the hated laundry list of dates and names, so you can actually understand and retain the relevant information.  This is especially important when trying to understand an exotic country with a troubled past that it is working (in varying degrees) to overcome.  This level of sophisticated delivery from a guide in a just recently emerging economy was not expected, but Avalon Waterways delivered.  Bravo!
Our walking tour started where I walked yesterday, so it was good to have some of the blanks filled in.  One thing that was emphasized was that no photos could be taken of government buildings, embassies or police.
The most interesting aspect of this morning’s tour is the amount of truly beautiful and well-located buildings that lie abandoned because of the former government’s decision to move the capital from Yangon and to move the “troublesome” students from university locations in the city to about 20 miles away to isolate them. 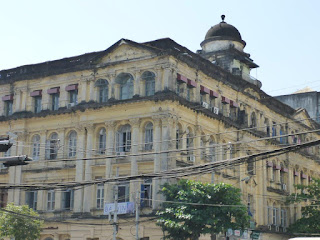 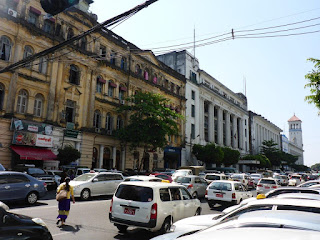 There is a serious effort to rehabilitate a number of the buildings, but it will be a long process with an uncertain, but optimistic, future.
During our walk we did get to see the famous Strand Hotel, which I would have liked the opportunity to visit.  I probably should have kept walking yesterday and I would have – If I had walked not 10 minutes from where I turned around at the river.
There is no real train system in Yangon.  All that exists is an ancient narrow gauge train that is slow, unreliable and, I am told, torture to ride on.  Apparently, even with all the traffic, the buses are a far more efficient mode of transportation.
Speaking of transportation, the former government banned all motorcycles and bicycles from Yangon, which adds significantly to the congestion.  So if you were expecting thousands of motor scooters as in Hanoi, you will be disappointed. The rationale is, like much of Myanmar, based upon power plays (it can be done, so it will be done) rather than logic.  Undoing so many of these seemingly illogical and frustrating things is difficult for a variety of reason. One must be patient…or as seems to be the phrase best suited for living in Myanmar’s biggest city:  “If You Find Patience You Will Find Enlightenment”…which I may copyright!
Lightening up things a bit, visited Lucky Seven, a truly local tea shop for green tea and sweet tea (lots of sugar and milk) accompanied by vegetable samosas, a flan-like custard and steamed buns.  It was fun to watch this well-oiled experience with teams of young boys with color-coded shirts provide an informal, but polished, delicious experience. 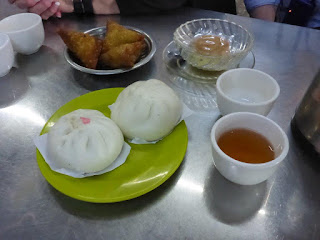 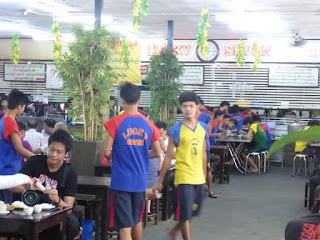 Next up was visit to a huge reclining Buddha.  OK, I  had to do it and I did it. 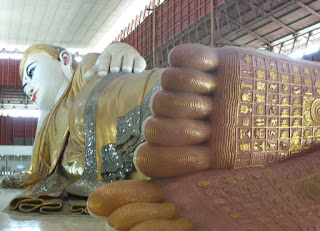 Note:  You will be required to remove your shoes and socks at every religious site with pretty much no exceptions.  Don’t count on there being exceptions because I witnessed first hand that isn’t going to happen.  However, as a nice touch Avalon Waterways does provide you with moist towelettes to clean the bottoms of your feet before putting your shoes back on.  So plan your footwear accordingly!
We then made an “off the itinerary” stop:  The residence of San Sui Kyi’s home where she spent 26 years under house arrest.  We could only see the gate, but I think it is an important place to visit – making the theory more of a reality.  Adding to the moment was the fact that the following day marked the one year anniversary of the new Myanmar government.
This was followed by a truly unexpectedly delicious lunch at the Monsoon restaurant.  Aside from finally trying Myanmar beer (two beverages are included, but you can have additional if you wish), there was a fixed, but very good, menu of a variety of more local dishes but flavored more for Western palates; something most of the guests appreciated.  (When I was in southern Myanmar this past November I was, disappointingly, served Thai Tiger beer.  Both are drinkable…especially cold in the 905+ degree temperatures.)
We dined on vegetable spring rolls, glass noodles with seafood, fried beef with black pepper sauce, chicken with green curry, fried fish with ginger sauce and some outstanding spicy huge river prawns all served with rice and steamed vegetables. 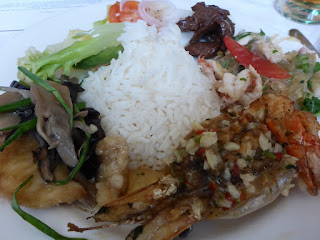 It was then time for a rest back at the hotel before heading to what truly was an exceptional late afternoon-evening experience.  We headed to the Shwedagon Pagoda which, honestly, photographs cannot fully capture.

On the way, Myo gave a nice introduction to Buddhism, which continued at the pagoda gently interrelating the architecture with religion.  Just enough for most, but I wanted more…and am sure as this trip continues I will get it.  Perfect.  (And this is me talking!)
The Shwedagon Pagoda is huge, gaudy, religious, historical, superstitious, architectural, and…and…It is 326 feet high with the complex covering 14 acres and covered with something like 65 tons of gold with the diamond orb at the top covered in 4,351 diamonds (the largest being 76 carats) and thousands of rubies and other precious gems. 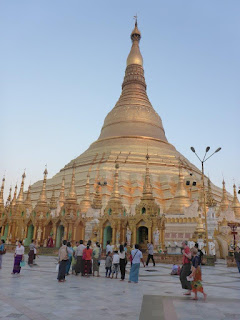 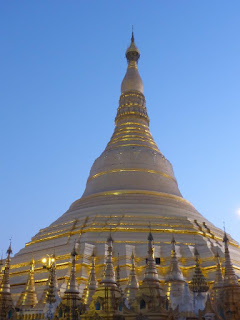 After about 1.5 hours wandering this huge complex (and really only touching the very basics of it) it was time to head to dinner at Le Planteur.
Before I detail our dinner, I want to give you some perspective:  Our group includes some pretty sophisticated and luxury travelers who only stay in suites, stay at Oberoi hotels, and speak only of cruise lines like Regent Seven Seas and Silversea (Seabourn curiously being foreign to them, but they will be with me for a while so that will change!).  Every single guest raved about this dinner from the restaurant to the setting to the cuisine to the service. 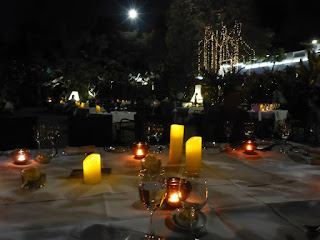 Our five course dinner included Shrimp and Vegetable Dim Sum, more of those Giant River Prawns (yum!), Daun Laska Seared Cod or Shalap Beef Cheeks followed by a mango éclair (the only disappointment of the evening).  Served with it was a very good Sauvignon Blanc or Shiraz; again two glasses per person (though a third glass was not an issue).

It was a truly unexpected oasis, complete with refreshing gentle breezes, after a hot, traffic-laden, noisy day being introduced to Yangon.  It will be remembered as one of the best cruise provided group dining experiences I have enjoyed.

Dinner was over by 9:30 p.m. and we headed back to the hotel to pack and be ready for our luggage to be picked up outside of our rooms by 8:00 a.m. and our 8:30 a.m. departure to the airport to fly to Bhamo; where the portion of the trip that I am really excited about begins.