Our arrival in Flam, Norway on Monday marked the first of the 2015 Goldring Travel Culinary & Cultural Cruise Private Events during our cruise on the Seabourn Quest through the fjords of Norway.
The day started out overcast, but the sun broke through with mild(ish) temperatures as we cruised in the early morning through the fjords on our way to Flam, Norway. 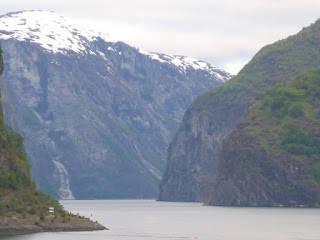 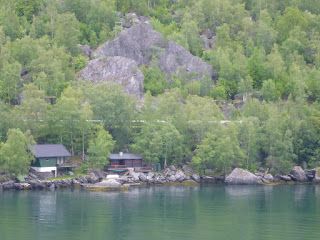 Since the event was in the afternoon, there was time to explore tiny Flam.  Flam, it seems, is something like a midway point between the two sides of the fjord and, therefore, more of a hub than a place to live.  This town of a few hundred has 1,300,000 visitors a year!  The most prominent business in town is the very scenic Flam railroad.  (On our day there the Norwegian Railway called a strike from 10:00 a.m. to 1:00 p.m., so those booked on the 8:30 a.m. and 1:00 p.m. tours were happy, but those on the 10:00 a.m. tour…as well as those on the Viking Star and the dozen or so busses from land tours…found themselves milling about the souvenir shops.)
My girlfriend and I decided to stroll out of town and found a lovely trail for a fairly short and easy hike.  The trail has some beautiful views, some artwork interspersed, and benches for those wanting to sit a spell along with options for longer and different trails along the way.
At the bottom of the trail we chose there was the entrance for a lovely dock that followed the coastline for about quarter of a mile.
It was then time for the Private Event at the ÆgirBryggeriPub (Eiger Brewery Pub); a very Nordic pub and restaurant with a huge fireplace, reindeer skin covered benches, interesting carved Viking figures and, of course, great beers and food. 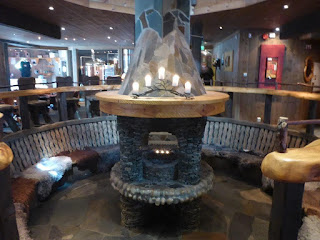 After a very interesting talk about the area and the brewery it was time for the tasting of five different local beers while sitting around this beautiful fireplace: 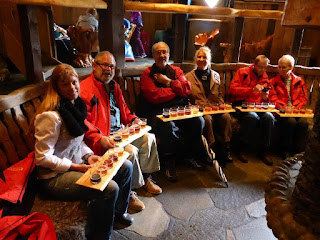 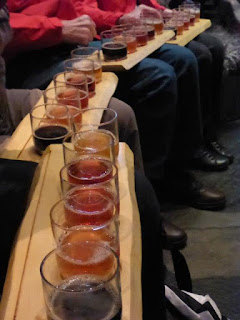 After our beer tasting it was time for our Viking Plank food experience with five courses paired with five beers:
Of course, no Norwegian meal would be complete with an Aquavit tasting.  These aquavits were actually made with grains rather than the traditional potato, so not “officially” aquavit but they were both very interesting. One was infused with orange peel, caraway and other spices while the second was infused simply with dill.  (Some thought the second tasted like pickle water, but I found it quite refreshing!) 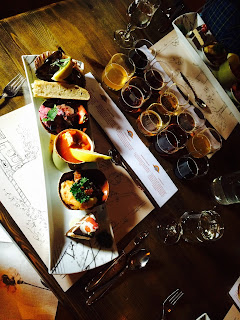 Needless to say, after tasting 10 beers, five courses and two aquavits it was time to head back to the Seabourn Quest for a bit of a nap and then another wonderful, but light, dinner with the charming Filippo serving us.  (He remembered me from his first days working on Seabourn.)
The next day the Seabourn Quest arrived in Alesund, Norway; a very pretty little town. After finalizing some of the other Food & Wine events, it was time to head out.  My girlfriend is a bit more active and, therefore we headed out to the “famous” 418 step (plus inclines) climb to the highest point – thankfully with a few benches were I could ‘er um enjoy the view.  Of course, as we were climbing I said, “You know all of these places can be gotten to by taxi, don’t you?”…and the first thing we saw at the summit was a taxi!
There were three ways down: the same steps, the beloved taxi or a downhill hike through the forest. We, fortunately, took the pleasant hike. (About 5 minutes into it I checked my heart rate on my Microsoft Band and it was still at 90 beats per minute!) Anyway, we strolled through the forest and the town of Alesund, picking up some souvenirs and enjoying the view. 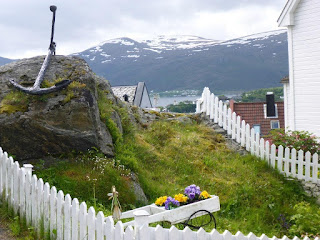 As I do, I looked for an interesting place to have lunch and came upon Anno. The reviews were not great (but you know what I think about most online reviews) and I am glad I did not listen to them.  What a wonderful find!  We sat outside with a bottle of wine and enjoyed the fantastic view.
We then ordered what sounded like a weird small portioned appetizer that was, in fact, a fantastic combination that was more than enough for lunch for two people:  Focaccia with liver pate, bacon, pickled vegetables and a variety of lettuces.   A bonus was the relatively warm temperatures and glorious sun!
It was then off to find the Fiskerimuseet (Fisherman’s Museum) located in an old fish factory that documented the history of the cod and herring fisheries with a huge assortment of antique and modern fishing relics.  I found it very interesting. 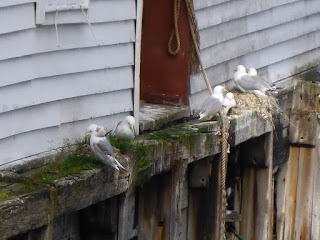 We also stumbled upon a glass blowing shop.
It was then back to the ship for a bit of relaxation and then dinner with Robin West, Seabourn’s head of expeditions and resident naturalist, along with two other couples (two sisters and a mother/daughter).  I didn’t get much time to talk with him about the new Ventures by Seabourn program during dinner, having actually spent more time doing so up on deck early in the morning, but I will be posting an article dedicated to same. (We will have a private dinner during the course of the cruise for a more in depth discussion.)
As we approach the Arctic Circle daylight is pretty much upon us 24 hours.  So after a nightcap with the sun blinding me in the Observation Lounge at 11:00 p.m., it was time to draw the curtains and have nice sleep in as tomorrow is a relaxing day at sea.