We awoke to bright skies and, at least for me, great excitement.  I have wanted to visit the Cambodia temples for many years.  My anticipation was heightened by a comment made by Anthony Bourdain in his television show, “No Reservations”, when he said that after visiting Angkor Wat he stopped taking photographs of his travels.  Why, I am not so sure.  One may not be able to capture the magnitude of something, but the small details can be compelling.  We shall see.


Our first day in Siem Reap was not, however, visiting Angkor Wat, but Angkor Thom.  It is very large temple complex devoted, for the most part, the Hindu religion. I say the most part because there is a very peaceful co-existence and melding of the Hindu and Buddhist religions. Carvings and faces everywhere cut into massive stones.  It really is not something that I can describe; so rather than not taking photographs I will let them provide the description.  To me there is a beauty and an essence that is compelling. 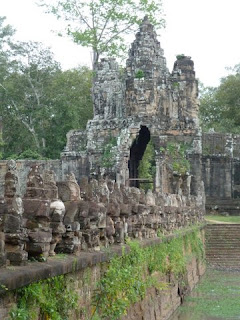 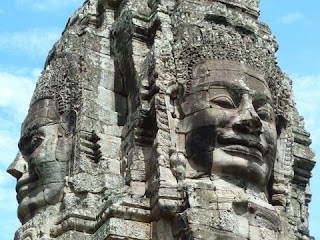 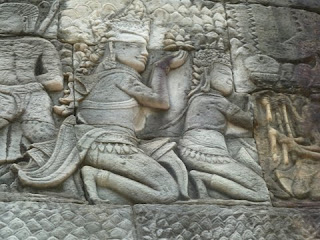 But what is making this more compelling is our guide.  He speaks from his soul and has an amazing way of balancing his pain from the time of the Khmer Rouge, the complex political and economic issues, the cultural issues of dealing with so many nationalities and, of course, his present day personal life.

As I mentioned in another article, I will most definitely be writing a reflective piece after my journey here ends.  But one thing is for certain, those that have come here to tick off something on their Bucket List are cheating themselves. 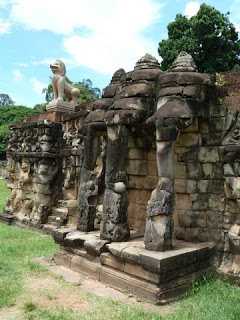 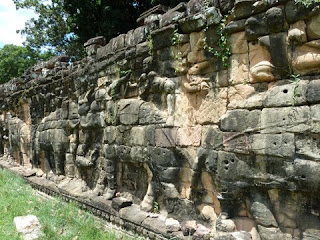 before visiting Baphoun Temple, which has a number of ficus trees both destroying and preserving the temple in what is clearly a tension between the jungle and the preservation/restoration of some incredible history. 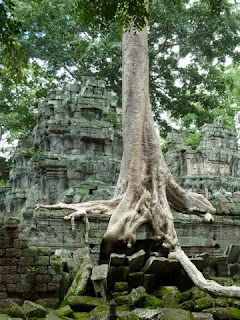 Afterwards we returned to the Sofitel Angkor for an independent lunch.  However, since we started late (after our late arrival the night before) there was no time to venture into Siem Reap for a midday meal; a bit of a disappointment.  I say this because at this point I am feeling a little bit sanitized.  The hotel is beautiful and quite modern, but until you step outside the property the reality of how poor Cambodia is, on the one hand, and how rich its cultures are, on the other, really doesn’t have a chance to hit you.  That said, my feeling of needing more of Cambodia was quickly satiated.

In the afternoon we had our first somewhat rainy experience visiting an incredibly beautiful temple known as Bantrey Srei (the Citadel of Women), which has some of the most beautiful and detailed stone carvings I have ever seen…with some really phenomenal architectural elements.  Our guide said many times that the temple is more beautiful in the bright sun, but I found it breathtaking in the soft rain. 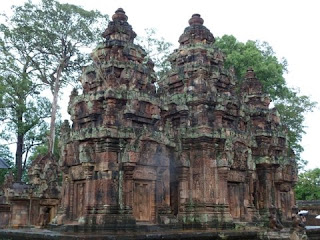 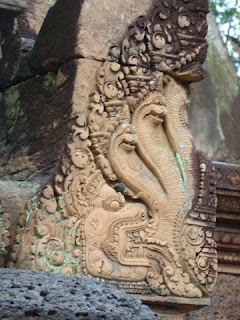 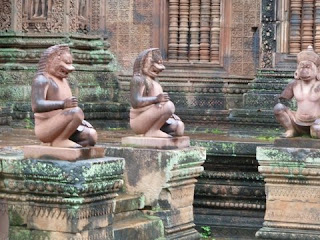 It was then time to leave the past and travel to the present…and, somewhat sullenly, the issues surrounding the poor education system in Cambodia; especially in the rural areas.

AmaWaterways supports an English language school for young rural Cambodian children.  It is very understated in its efforts because, as it has been explained to me, there is a delicate balance between doing what is right (by giving back) and appearing to be charitable solely because it is a good marketing ploy.  To be sure, AmaWaterways clearly is doing this for the right reasons.  It only suggests…if you read all the materials sent to you…that you bring some school supplies to donate.  AmaWaterways does not ask for donations of money and, honestly, it is so discrete, I would not have a clue how to make one. So when you visit it is totally about the children.  (Compare Silversea automatically adding a monetary donation to your onboard account for a charity that you never visit or have any other involvement with…and then you have to ask to have it removed if you do not want to donate; something I have been overtly critical of.) 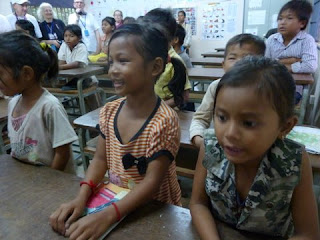 I enjoyed talking with the children, spending a few moments with as many of them as I could helping the practice their English.  From the beaming smiles, to the sheepish looks, to the class clowns, our brief 20 minute visit went by so quickly; ending with them singing a song in English with so much pride and so many smiles that you had to feel great. 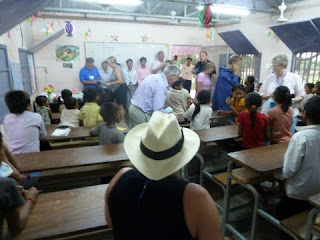 There was an included dinner at the hotel with a Cambodian dance troupe.  I observed that most in our group really enjoyed it.  But for me it was just not as an authentic experience as I would have liked.  Again, it is a balance sort of thing.  (If I was to do this trip again, I would skip the dinner and headed into Siem Reap for a local dinner.) 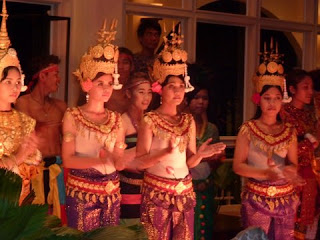 I awoke the next morning with threatening skies just begging to ruin my visit to Angkor Wat.  With raincoats and umbrellas in my backpack we headed off…and the skies brightened and the temperature rose.  And the temple is everything it is cracked up to be.  It is architecturally impressive and far grander than any camera lens can capture.  The relatively short time we spent at Angkor Wat just didn’t seem enough, but the heat and the attention span of our children said, it was.  (AmaWaterways makes it very clear that you can spend less time or stay later…even return at your leisure…via a $5 tuk-tuk ride; a rickshaw attached to a motorbike.) 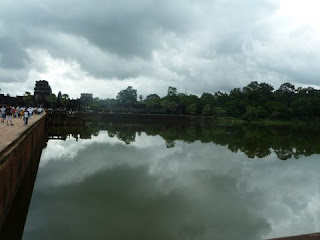 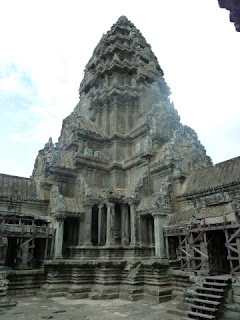 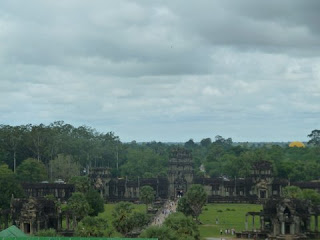 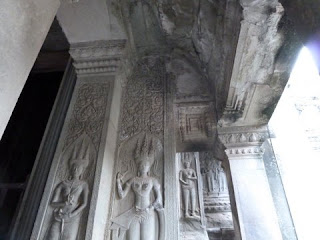 Then, to the relief of my friends and family, it was an afternoon of decompression and relaxation by the pool.  It really struck me that, as I sipped my mojito in the whirlpool, that I could be anywhere in the world.  While somewhat frustrating for me, when planning a tour for a group, the art of compromise is oh so important.  But not to worry!

After everyone was refreshed it was time to head into Siem Reap and its famous Pub Street and Night Market.  We decided to try an upscale Cambodian restaurant named AHA and the surreal contrasts I have been experiencing deepened.  While I dined on a three plate tapas sort of affair that, while truly some culinary art and  included snake for $9.00, I could have walked out the door and literally less than 50 feet down the road purchased and entire dinner for $2.00.  In the end, our dinner was quite expensive…too expensive…but very good.  But then the polish wore off a bit when the phone lines went down and we were scrounging for cash because they could not process my credit card. 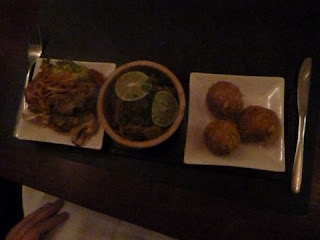 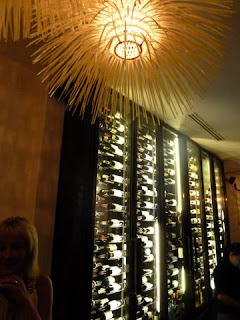 And then the shopping began.  Beautiful shawls for $1.50.  A very nice ceramic Buddha for $12.00.  Varying quality jade, t-shirts, etc.  Fish massages (where they eat the allegedly dead skin off your feet) for $2.00. Street food.  And tuk-tuk drivers hawking rides.  It was a lot of fun and a great way to end our time in Siem Reap…finally getting out of our bubble and also being refreshed after a fairly hectic itinerary so far.

Tomorrow we board the AmaLotus after a 5½ hour drive.  I wonder what we will see along the way.