Day Four of the 2015 Goldring Travel Culinary and Cultural Cruise on the Seabourn Quest was the second of five sea days.  We have been blessed with unusually calm seas, warm(er) temperatures and plenty of sun. Most of the day was spent working (yes, even while cruising I do work), making final arrangements for the next Private Event in Svolvaer, Norway and eventually soaking in the hot tub on the bow (my favorite thing to do on a Seabourn cruise!).
That evening we dined in Restaurant 2.  It was a “Signature” evening so the menu is sort of the “greatest hits”.  As Diane had never dined there before it was the best night to give it a try.  Although I have heard people say Restaurant 2 is getting a bit tired, the fact of the matter is the restaurant was completely full, the service was excellent and the cuisine was top notch.  All in all we had a wonderful time.
The next morning brought us in to the Land of the Midnight Sun, with the sun shining 24 hours a day, and to the fishing town on of Svolvaer, Norway where the second Goldring Travel Culinary & Cultural Event was being held and with both Captain Geir-Arne Thue-Nilsen and Executive Chef Jes.  As we arrived into port I noticed dozens of wooden racks for drying cod (commonly called bacalao) with most of them now empty.  Finding out why was part of our exploration this day.  I was off the Seabourn Quest on the first tender to scope out this tiny fishing village and to find a good fish market as Chef Jes was ready to purchase some fresh local seafood.
What I discovered is a sleepy town that has huge activity from January to April…when the cod run into the Lofoten Islands…and then pretty much nothing.  Despite all of my efforts and being in the heart of the Lofoten Islands’ fishing fleet there was no fish market in town.  But all was not lost!
We found a bakery where I enjoyed a cup of coffee and a typical Norwegian breakfast.  I am not sure of the name (Norwegian is hard to pick up on!), but it consisted of a light pancake folded over a bit of Norwegian brown cheese – which is addictively good.
After meeting at the pier we drove to Svinoya Rorbuer and its fantastic Borsen Spiseri Restaurant; located on a small island just out of town.  We were met by a wonderfully, colorful and knowledgeable guide who took us back in time explaining the history of the Lofoten Islands, when and how the cod fishery has become so important, the lives of the fisherman and the women who processed the cod, and the reasons why the cod fishery lead to enormous wealth, greed, hardships and human tragedy. 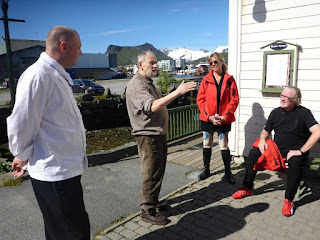 As he was talking to us a truck filled with dried cod, literally taken off the very racks I saw sailing in on the Seabourn Quest, passed us.
After an interesting explanation of the drying racks it was time to visit a rorbu, a small fisherman’s cottage, where 12 men would pack themselves in to six beds with no plumbing and merely a small stove for heat.  (By the way, these have all been renovated with kitchens and luxury bathrooms and are now available to rent out during the summer months.) 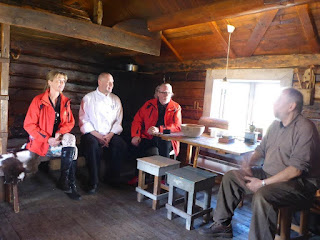 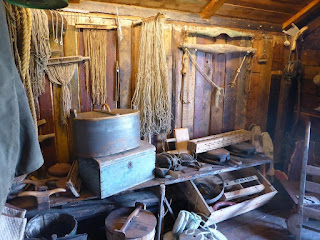 After visiting the private gallery of a local artist (whose family essentially owned Svolvaer), our tour ended in a small shop typical of fifty years ago.  We were greeted with a glass of Bollinger Champagne.  I looked up a Captain Geir-Arne and he said, with a gleam in his eye, it brought back memories as it was exactly the type of shop he grew up with as a child… Perfect!  Though I am sure champagne was not being served. 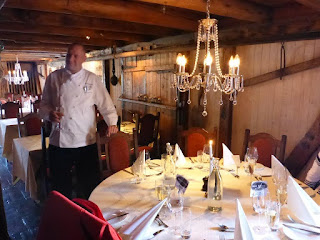 We then headed through the back of the store into a beautiful, antique, Norwegian dining room reserved for just our group where we had a totally different take on the Norwegian culinary experience.  You see in the sleepy little Norwegian town lives an incredible chef, so we left ancient Norway for the modern day. 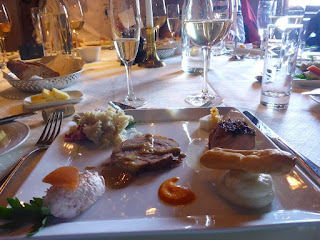 Our culinary adventure consisted of the Lofoten delicacies including:
This was paired with the Bollinger champagne and then a wonderful and rich Chassagne Montrachet.
Dessert consisted of an incredible Cloudberry Sonata and a frozen Cloudberry mousse.  Cloudberries are incredibly expensive and, as Captain Geir-Arne explained, are difficult to even harvest with one berry appearing here and another there.  Cloudberries could be my favorite fruit…now that I have eaten them fresh.  What an incredible and unique flavor.  (And, of course, it gave Chef Jes some inspiration and…of course…cloudberries are now appearing on the Seabourn menu!) 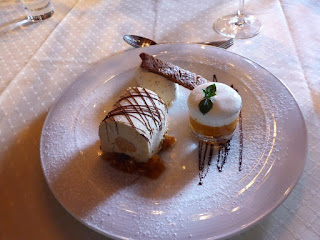 It was then time to return the Seabourn Quest for a hot tub sailaway
and then  a spectacular cruise up the Trollfjord; a very narrow, but beautiful, fjord.  The Seabourn Quest is the largest cruise ship that can maneuver into this fjord. (It was even more interesting as explained during our Goldring Travel event one of the areas most famous and infamous events happened in this fjord.) 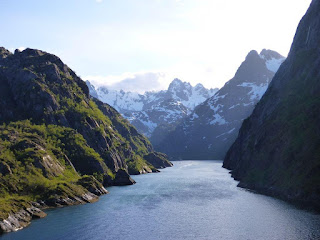 The Ventures by Seabourn team also had four of the zodiacs filled with Seabourn guests greet us. They had a very impressive view of the fjords…and also a bit of fun buzzing the Seabourn Quest as she departed the fjord. 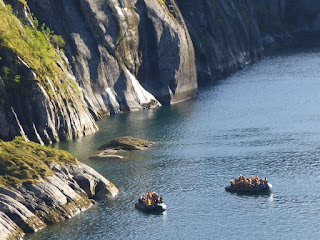 That evening was a very impressive Norwegian themed dinner in the Colonnade complete with some of the best salmon I have ever tasted, gravlox, herrings, reindeer, moose sausage, local beers, and more.  As a bonus, the weather was so nice that we were able to dine al fresco!
The next day the Seabourn Quest arrived in Tromso, Norway – with another spectacular sail into port – where I hosted the Ensemble Travel Group Ensemble Experience.
We started our tour at the Polar Museum which was, to my surprise, incredibly interesting and really added a bit of historical perspective to this larger, but still charming, port. 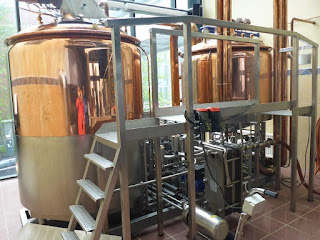 It was then onto the Mack Brewery, the northernmost brewery in the world.  The two most interesting aspects of this tour were that the Mack Brewery is also the northernmost bottler of Coca Cola products and, in its microbrewery, they play rock ‘n roll, for each type of microbrew they create (with a heavy dose of Jimi Hendrix…one of my favorite artists!).  During the tour we sampled the Mack Pilsner beer. 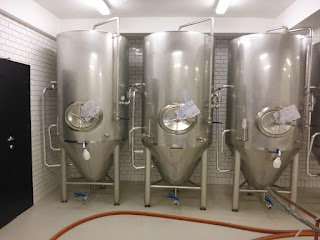 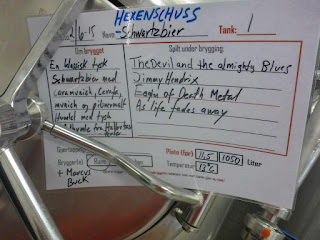 In a bit of how the world of culture and cuisine intermingle I noticed bags of malt from Bamberg, Germany. Just this past October in the 2014 Goldring Travel Food & Wine Cruise we visited Bamberg, which was and is the malt capital of the world.  To read about Bamberg and the fantastic beer tasting (as opposed to the one we are about to have) you can read about it here. 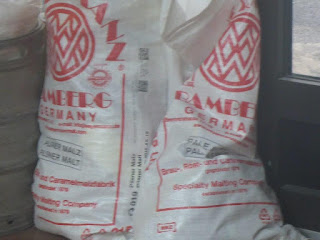 After the tour we headed to the Ohallen Pub for further tastings of up to seven Mack brews (of course with a Norwegian snack).  The pub actually has over 60 beers on tap.  So much beer…so little time!
As the rain started to fall (a surprisingly rare event on this cruise) we headed back to the Seabourn Quest for an early sail away heading to Honnigsvag, Norway – the most northern location in Europe – and for me and Diane our first Venture by Seabourn.
But as the Seabourn Quest was sailing away, I arranged a Private VIP Galley Tour – including, of course, champagne and caviar, but also some of that wonderful Norwegian brown cheese and aquavit – 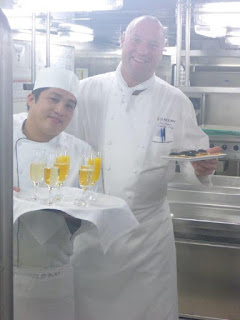 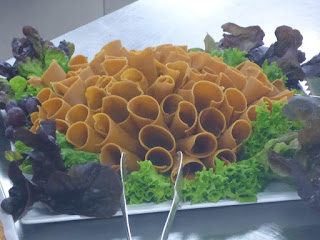 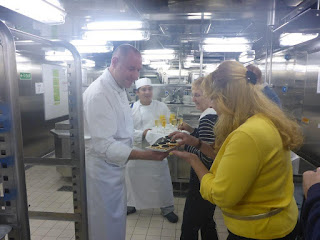 plus a visit to a number of the provisioning areas and discussions about the super high quality of Seabourn’s meats, poultry and fish. (Unfortunately, as we were leaving port some of the watertight doors were shut so we were unable to see the liquor store.)  I must add that Chef Jes puts on quite the show and his enthusiasm made it quite memorable.
Oh, yes, it was then time for the Seabourn Champagne & Caviar Sail Away…
and a fantastic dinner at the Patio Grill (where I sneaked up some Norwegian sausages Chef Jes was able to bring on board)…

and the realization that I needed to be up at 5:30 a.m. for our zodiac riding birdwatching and hiking Ventures by Seabourn adventure.