After breakfast we headed to the domestic airport; a two month old very modern facility adjacent to the international airport (which will be replaced in the coming years); though it is quite functional now.  Our destination is Bhamo (also known as Banmaw) which is only about 40 miles from the border with China as the furthest reaches of the Irrawaddy River (which, by the way in Myanmar is called the Ayerwaddy River).
Avalon Waterways is the only river cruise company that travels this far north on the Irrawaddy River.  In fact, Avalon’s experience spends almost 50% of its time in more remote areas where you can really experience a truly non-touristic Myanmar. (If you were to take a Scenic river cruise, for example, you would spend six hours on a bus to reach your ship in Pyay – also known as Prome – before heading north up the river to Mandalay, but to no further north.) This is where I need to repeat what I say so often: “What is YOUR luxury?!”  I want to see Myanmar more than a ship…and the Avalon Myanmar is pretty darn nice – as I will detail in another article.)
There are only two ways tourists are allowed to travel to Bhamo:  Flying and ferry.  I have seen the ferry and trust me this is NOT an option!  (And, let’s face it when choosing a river cruise most of us would like things such as a clean bed, a private bathroom, food and electricity beyond a bare lightbulb.)  Even though travel by bus or car is not permitted; if they were they are simply not practical options as Bhamo is that remote.

There is one other issue getting to Bhamo:  There are no regularly scheduled flights.  So Avalon Waterways charters a plane to fly the group in.  I won’t say that I was thrilled to see the aircraft, but it worked and there was full service on the 1.5 hour flight including drinks and a meal.  (It is suggested that you use the plane’s bathroom before landing due to a lack of facilities in Bhamo.)  Avalon actually flies its staff with its guests so that there are assistants for luggage on both ends.  This river cruise is not a simple operation and, to be sure, I am impressed with how flawless things have been so far.

I must pause and mention that the only American fast food that has infiltrated Myanmar is Kentucky Fried Chicken (KFC) and there was one at the restaurant so I had to try it.  Let’s just say the chicken was a lot smaller (I am sure no growth hormones!), there was far less pepper and far more grease (yes, it is possible!).
Upon arrival in Bhamo we were given a brief tuk tuk tour of the outskirts of Bhamo and then a walking tour ending at the pier.
Just as we were about to embark a sampan for a 45 minute slow ride to take us to the ship (as the water level right now is too low for the ship to make it all the way to Bhamo) I saw a street vendor making fritters (known as Husband and Wife – as the bottom is cooked (wife), then another piece is placed on top (husband) trapping the filling (the baby) ) – which, of course, I had to try.  It is made with palm sugar, but it is not sweet to the Western palate. 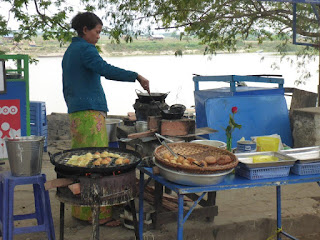 While I offered some to all of the guests only two tried them.  This would become a recurrent theme:  Don’t eat the local food because you might get sick, it’s too spicy, etc.  (My thoughts on trying local foods will be discussed in another article.)
Anyway, our time on the old sampan was not wasted as Mark, the cruise director, gave us the orientation that otherwise would have been done on the ship, so when we arrived on the ship there would only a quick safety briefing and we would be off.
My initial impression of the Avalon Myanmar, built in 2015 in Yangon, Myanmar, is that she is beautiful, the interior design is excellent and the layout really works well.  The wood paneling on the exterior, coupled with lots of glass, gives the ship a very upscale appearance.  Once onboard you are greeted with lots of warm toned dark wood, including the flooring.  The public spaces both interior and exterior are beautiful and the suites are really well thought out.
I will detail the ship in another article, but here are some photos. 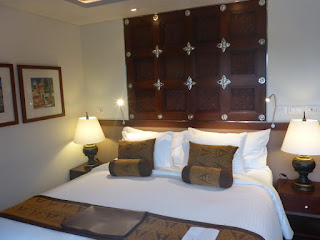 A late lunch was served, as it was about 2:30 p.m. that was of a wide variety of Western food from egg salad to cold cuts and smoked salmon, to hot and cold soups and salads to what I will call Burmese-esque and Asian-esque cuisine.  There is no question that the vast majority of the guests prefer (as expected) offerings that looked exotic, but did not taste so.  But Avalon Myanmar’s chef has a cure for that:  He will, upon request, either adjust your food to be more authentically Burmese or will provide a delicious soy and green chili sauce.  (Note:  There is free flowing wine and beer at lunch and dinner with your glass regularly topped up.)
After unpacking and a bit of a rest, we sailed through the Second Defile (or gorge)

and shortly thereafter we tied up to the shore for the evening and it was time for cocktail hour which ends with the daily briefing for the next day’s activities.  After dinner it was time for a whisky outside undercover as a soft rain began to fall.
The next morning the ship moved just across the river to a small island named Kyun Daw, home to over 7,000 stupas.  With a number of less than agile guests I was curious as to how Avalon would accomodate them.  With an aluminum gangway, some sturdy steps and a human handrail plus many staff to assist everyone safely disembarked the sampan for the walk across the sandy beach exposed during this low water season. 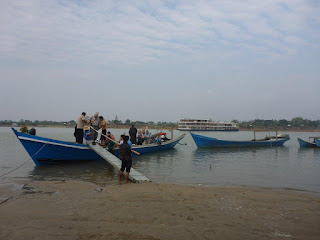 More enlightening than the stupas were the people living on the island, who were charming, friendly and curious. 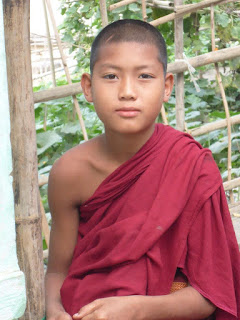 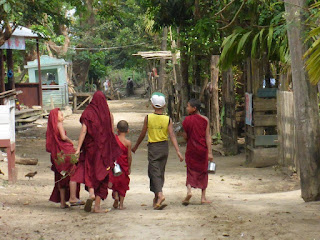 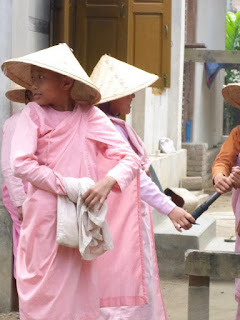 During our walk, Myo, our guide, explained some of the housing, family life, religion and working aspects of the Burmese living in this area.  After visiting the home of an 80 year old “retired” carpenter and his family

we visited a nunnery offering rice, juice and some cash after learning a bit about Buddhism and touring the residence, which was next to the monastery.

I do have to mention that the flowers were brilliant and, frankly, breathtaking at some points. 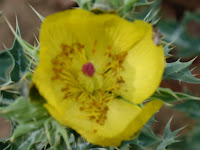 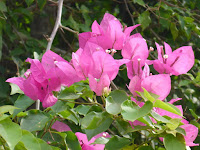 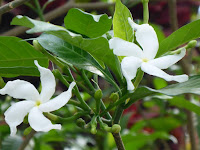 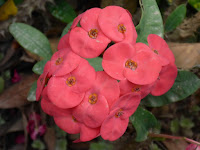 After a walk though too many ancient stupas to count we wandered back to the sampan that brought us back to the Avalon Myanmar for a rest before lunch. 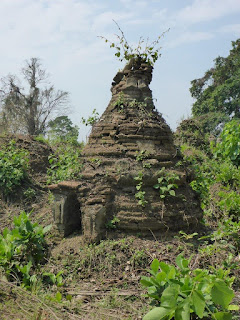 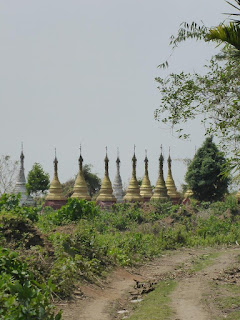 Later in the afternoon we tied up near Katha where we were able to walk through the village.  Though a bit frustrating that nobody else took advantage of this opportunity, the good news is I had the village to myself!
Shortly after I started my wander, two young boys (12 and 8) decided to escort me around the village while the older one practiced his English.  They very proudly showed me their school
and when I asked to see their homes they were clearly on a very important mission.  Charming! 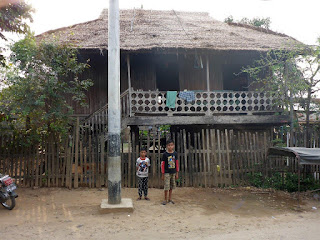 As I walked with them many of the children in the town became curious (as not many Westerners ever come here…and obviously most that do never leave the boat to interact with the locals) and then many adults did.  Eventually, as I took photos of it seemed everyone in the village,

a group gathered and I was offered a cup of what I think was Tang; a very sweet gesture of friendship. 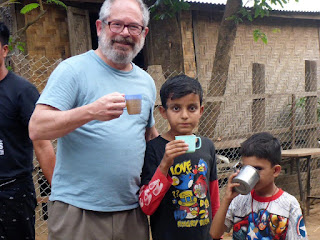 The ensuing team photo pretty much says it all! 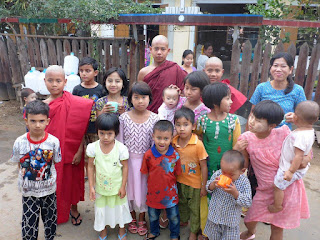 My time with these northern Burmese villagers was special.
Upon arriving back at the ship, Mark, the Avalon Myanmar’s cruise director and Joe, the assistant cruise director, invited me out for a street food dinner.  A short pickup truck ride and we were in Katha at a favorite dining spot.  As we dined on prawn rolls and samosas with tamarind sauce, fish in banana leaves, spicy fish with Chinese mustard and local Myanmar beer,

Joe decided it wasn’t enough food so he ordered another type of fish (more delicious than the first), Chinese mustard with tomatoes, and then – as if that wasn’t enough – a wonderfully spicy noodle soup with chicken, fish balls, tofu, mushrooms and more.

After a bit of a much needed walk through the night market, it was time to head home and end what was well and truly a wonderful first full day on the Irrawaddy River on Avalon Waterways Avalon Mynamar. 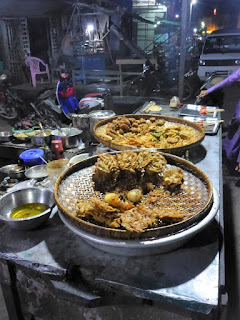