Celebrity Xperience In The Galapagos- Part V (The Attack of the Flightless Cormorant…and Other Cool Stuff!)

The Celebrity Xperience made a short journey overnight to Urvina Bay, Isabella Island with the goal to see land tortoises and land iguanas. 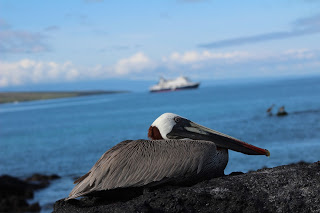 Our options were a long fast-paced walk or a short walk both with optional  snorkeling at the end of the morning.  While the latter gave more time to relax onboard, the fast-paced walk, which promised to be challenging, was my choice.
Urvina Bay is not a regular stop along the various routes taken by ships touring the area so it was most definitely more rustic and natural with overgrown paths and large lava boulders to climb.  So with that we made our wet landing, changed into our hiking shoes and long pants and were off.  OK, we weren’t really off because almost as soon as we got on the trail a small land tortoise was feeding in the path.
And then a land iguana.

A few minutes later a large, old, tortoise came lumbering down the path; chomping on vegetation as she came along.  Since tortoises have virtually no hearing and very poor eyesight as long as we remained still she would not feel us (touch is their most important sense) so with the speed of, well, a tortoise she lumbered past us…making our initial fast-paced walk anything but!

While seeing land tortoises is, at times, quite challenging due to their movement to different areas, we must have easily seen a dozen or so in all sizes.
We then came upon a land iguana and with a tortoise nearby; requiring the taking of the “postcard” photo. 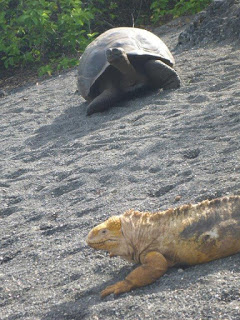 It was a hot and active workout on the hike with few photo opportunities.  It was, however, a great way to appreciate the ecology and geology of the island which has been uplifted (raised so that what was underwater was now dry land) through volcanic activity in 1954. 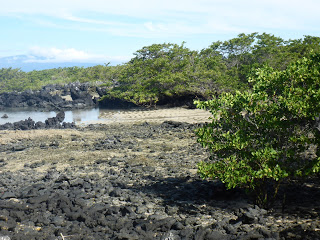 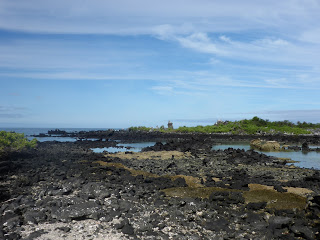 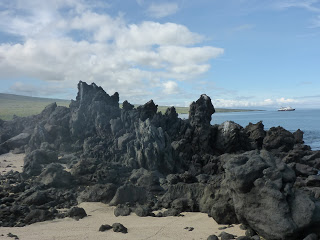 After the walk it was time to snorkel.  Unfortunately, the water was murky and there wasn’t much to see; though a black tipped reef shark did swim past.
During our lunch and siesta the Celebrity Xperience relocated to Punta Vincente Roca, on the island of Isabella.  On our sail I spotted a Mola Mola (sunfish) bobbing by our ship.  Very cool.
We then arrived for a deep water snorkel (for advanced snorkelers) and a zodiac ride.  The water was cooler and visibility wasn’t good at all as I snorkeled following the sheer rock face.  However, with pelicans, flightless cormorants and blue footed boobies diving around us it was kind of cool.
And then, because this is the Galapagos, a peeked around a lava outcropping and there were two sea lions; one of which decided to play with me for a few minutes.  She seemed to want me to come further into the cove she was in, but with the waves I figured I would wind up getting sliced up on the barnacles and jagged rock, so we more or less played a bit of hide and seek around the outcropping.  Just a normal day. 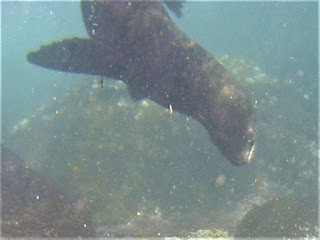 But then the, ‘err um, unusual happened.  A flightless cormorant came swimming over.  Now the rule is that you must give all animals at least 6 feet of clearance, but if the animal approaches you it is fine.  Well, this cormorant wanted to get close…really close.  Like ridiculously close. 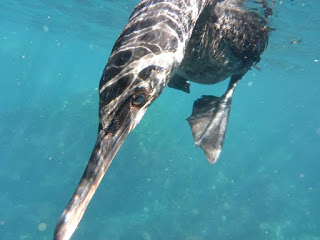 And then it started to peck at my mask and then wanted to eat my camera!  Despite my back-peddling, he just kept coming…until he finally stopped.  And then he became really aggressive.  It was like a cartoon.  I could not stop laughing as he tried to eat my camera! 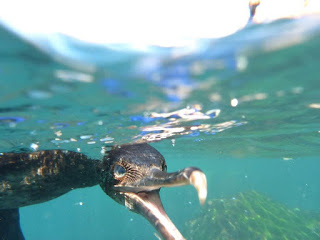 It was then time to head back to the ship and get ready for our zodiac ride.  With late afternoon fog rolling into some areas and not others, we had our first close-up look at Nazcar (formerly Masked) Boobies as well as the seemingly ubiquitous blue footed boobies and noddy terns as well as another very large population of marine iguanas.
As we returned to the flightless cormorant attack location a lone penguin stood on a rock.
A great end to another Xcellent day.
The following day is a mandatory visit to Puerto Aroyo, Santa Cruz Island and the Darwin Research Center. The Ecuadoran government determines what permits it will issue to each ship and pretty much all of them are required to come here; the main port.  It not only allows the ship to take on provisions, it allows the Galapagos to benefit from the only real opportunity for souvenir shopping. 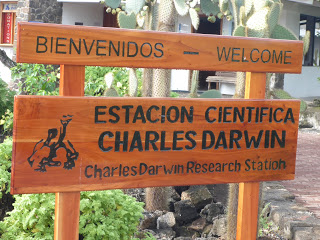 The Darwin Research Center is a well-designed and enjoyable facility, though seeing tortoises (even baby ones) is really is anti-climatic since we saw tortoises in the wild.  For those engaging in land holidays or that do not visit an island where they are present, it is worth an hour of your time.

Contrasting Lonesome George is Super Diego, who is alive and well…and clearly the stud among land tortoises; which you can observe!

It was then off to El Manzanillo Ranch, which I felt was a total waste of time (though others enjoyed it).  You drive about 30 minutes to a farm where you have a light snack and then walk around a few acres where tortoises roam.  You then drive back 30 minutes. ‘Nuf said.

The afternoon was left open to stay on board or to do more shopping.  Me:  I hit an internet café as Celebrity is working on the onboard internet.  All was going well until there were rolling blackouts in town and the internet went down. Welcome to life in the Galapagos.  Such problems, right?

While I waited for the zodiac to pick me up:  A lazy sea lion and a school of golden rays. 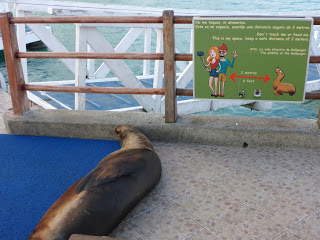 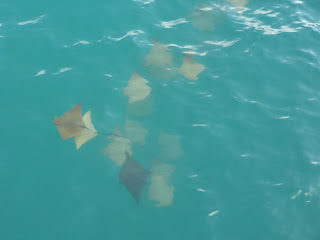