The Goldring Travel 2013 Food & Wine Cruise has, so far, spent three days visiting some rather rustic ports on the Seabourn Quest.  It is, however, now time for Chef Rafael to let out all the stops and create the annual Food & Wine Tasting onboard the ship.

But before we get to that, you should know that there is a huge amount of preparation that goes into this event that starts long before we board the ship.  There are emails and telephone calls months before to be sure the wines and some specialty items are onboard.  Menu themes are discussed.  Wines which are available or which might be able to be acquired are talked about.  And when, as here, the ports visited during the cruise leave literally no option for ingredients or local wines, the task became quite involved.

the first day of the cruise I had a meeting with Chef Rafael Peterkovic, Sommelier Tihana Glumac, as well as the Hotel Manager, Food & Beverage Manager and the Restaurant Manager.  We talked about the theme I had been discussing:  A play off of Brazilian and Argentinian Barbecue.

And then I said to Chef Rafael, who seemed a bit nervous, “Experiment.  Make something, but don’t tell the guests what it is.  Don’t worry if something doesn’t work.”  I then saw a bit of an evil glint in his kind eyes…and all of the prior planning went right out the window.  Seabourn Chef Rafael was taking over.

And then he said, “I am not telling anyone what I am doing until two hours before the event.  It is going to be a secret!”  How cool is that?
Of course, there is nothing better than an inspired, talented, chef…and that is exactly what we had.  (The Sommelier Tihana Glumac found this a bit unnerving.  But, alas, she had no choice!)

The venue was Restaurant 2; perfect since the galley is right next it and it has an intimate feel even during the day.  Seabourn let me borrow some of its best wait staff as well.  It was time for one of the most amazing and delicious experiences ever held on a Seabourn ship.  (So much so that some of the prior chefs…even before reading this article…have made comment!) 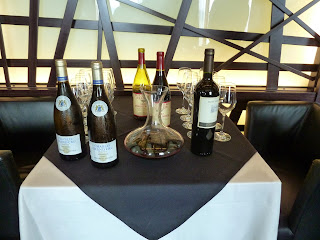 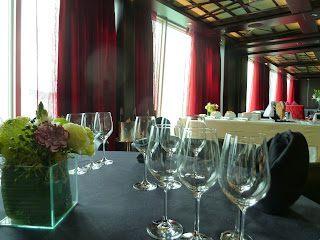 There was only one “cooking demonstration” – which was really an opportunity for Chef Rafael to say hello before rushing back to the kitchen to work his magic presenting simply, but perfectly plated, tastings.  We started with a Pata Negra Carving accompanied by French baguette, butter baguette, herb butter baguette, black olive tapenade and green olive tapenade.  This was pared with a 2008 William Seylem Pinot Noir. 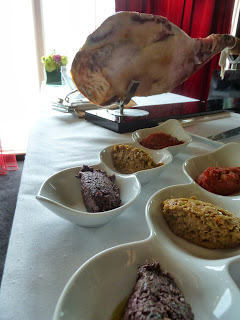 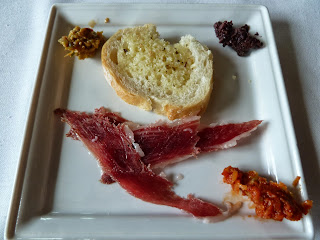 While the ham by itself is amazing, Chef Rafael providing five different presentations so simply was a sign of the nuanced and elegant dishes to come.

Of course, as any inspired chef does, he “hit us right between the eyes” with his first prepared dish:  Truffled Tempura Foie Gras Pop with Black Label Jelly and green pea puree.  This actually had Patron tequila infused into the middle of the foie gras, so as you bit into it you experienced a clean, smoky, blast of surprise. (Note the wonderfully complimentary quail leg also presented on the right.)  Pared with a 2007 Inniskillin Ice Wine it was a fantastic culinary experience. 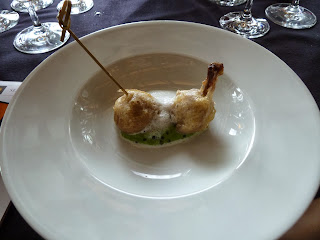 Next up could be the best soup I have best soup I have ever tasted.  (Sorry Mom).  It was a Creamy Lobster Broth with Lobster Ravioli paired with a 2006 Meursault Chateau Blagny.  The texture was as amazing as the flavor:  So light it was not really a soup, but with enough body that you had much more than a foam.  Paring a wine with that soup, especially because it was so outstanding, was no easy feat, but it was well done. 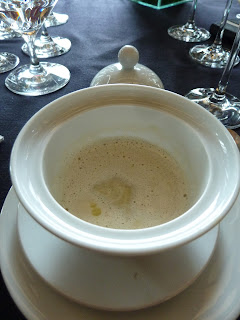 Another surprise was a pair of sorbets:  In homage to our Brazilian cruise a Caipirinha sorbet.  I am not sure how Chef was able to freeze such a potent drink, but he did it.  (Kudos to the bar staff too!).  The star was, however, the Beetroot Sorbet which actually has a touch of mango.  Your initial taste of this purple delight was mango, but then blended into a light beetroot.  It was one of our group’s favorites.  Using the Caipirinha Sorbet to truly cleanse the palate after that taste treat was the way to go. 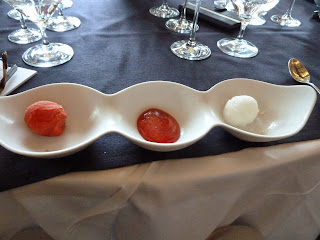 And then, believe it or not, Chef Rafael decided to really show his stuff.

Brazilian Style Kebobs Churrasquiho (Beef) and Churrasco de Frango (chicken) –  What an incredible layering of flavors; having marinated and basted them for over eight hours in a yogurt/secret ingredient sauce.  Just a nice pop of spice and incredibly tender.  I believe this is where creamy smooth butter, just held together with a bit of mashed potato, was presented.  Awesome! 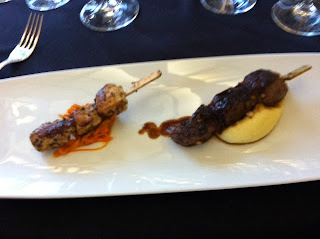 Next up…as if that wasn’t enough…Lime Marinated Brazilian Pork Ribs with a Black Bean Stew.  After the slightly spicy and meaty texture of the kebobs, this rich, melt-in-your-mouth, experience was a perfect play.  Delicious. 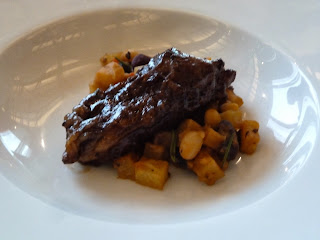 Now, totally full Chef Rafael presented one more dish…just to finish us off.  Iberian Port Rack with a Passion Fruit Sauce.  While it was a fitting, and very tasty, end to the barbecue…and it was tasty!…the real star for me was the Porcini Mushroom Risotto.  I am very finicky about risotto, only having two in my life that actually made me say, “Risotto!” Chef Rafael’s was the third.  (Little did I know Chef Rafael actually prides himself on his Porcini Mushroom Risotto…or that he would later make me some more!) 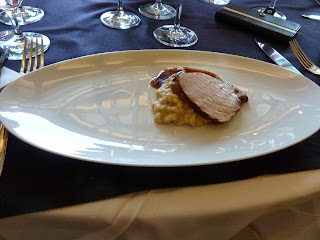 These dishes pared with a 2006 Don Melchor, a 2010 Hanzell Chardonney, Caipirinha (of course!) and 2012 Erioca Riesling (one of my favorites) our palates were as overwhelmed as our stomachs. 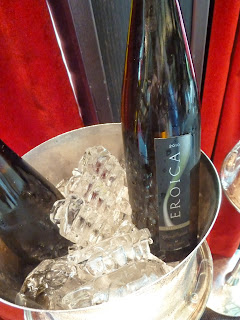 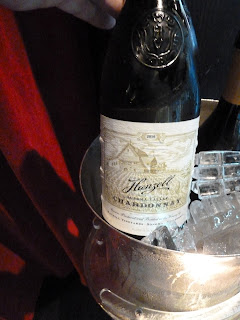 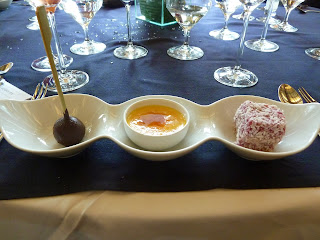 I know that photos and descriptions cannot possibly do justice to what Chef Rafael and Sommelier Tihana created.  It was an extraordinary event…and one that set up the Goldring Travel 2013 Food & Wine Event  in Montevideo, Uruguay to follow beautifully.

If you are interested in the 2014 Goldring Travel Food & Wine Cruise, please call (877) 2GO-LUXURY or email me at eric@goldringtravel.com.