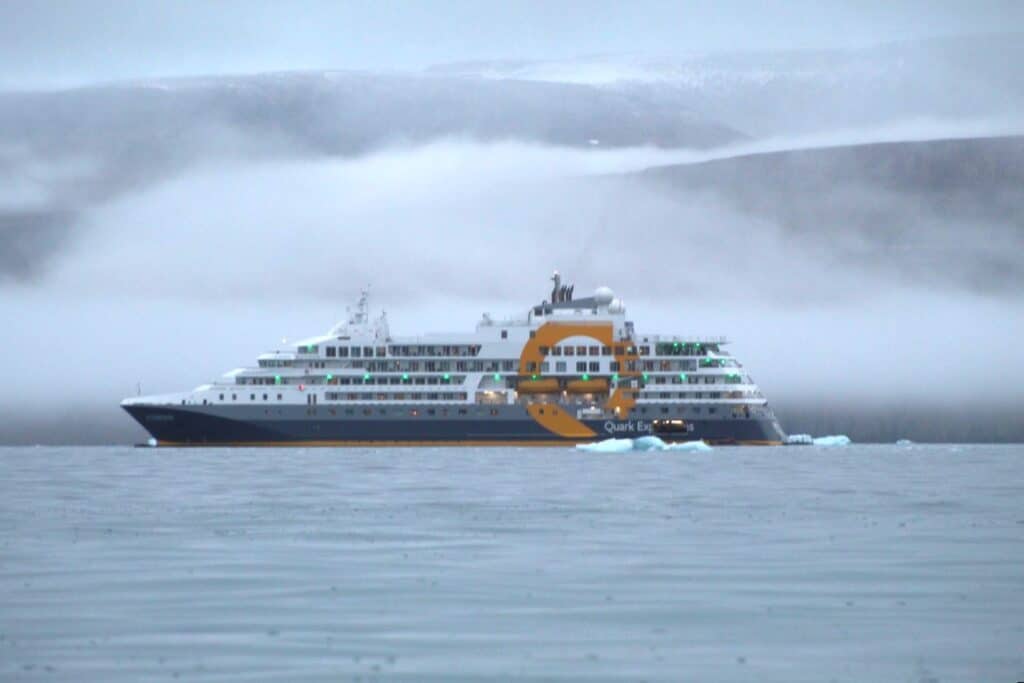 My Northwest Passage Journey on Quark Expedition’s Ultramarine was truly enriched with the “detour” to the previously unscheduled Inuit community visit.  And as I would discover within myself, the history and heritage of the Inuit people are, for me, far more interesting and emotional than that of the Europeans searching for the Northwest Passage…and dying doing it.

I acknowledge that many are attracted to this Northwest Passage expedition due to the history of the Franklin expeditions and those before him…and those searching for him when he disappeared.  There are many British onboard and some of them border on being – if not actually – obsessed with this; blinded of all else. While I have had a most enjoyable and memorable experience to date, as have many, the complaints of those passionate and obsessed who not only cannot embrace the difference between a cruise and an expedition (no real set itinerary because you can’t) can really suck the joy out of a ship.  (Hint: With all their complaining, the landings they demanded are happening in spite of their sour moods.)

Personally, I find little romance in the history of arrogant men seeking their fortune, while making many mistakes, imposing their prejudices, and pretty much killing everyone (including the innocent youths just trying to earn a living) by way of slow painful deaths due to things such as scurvy, tuberculosis, botulism, lead poisoning, freezing cold, and mental illness. 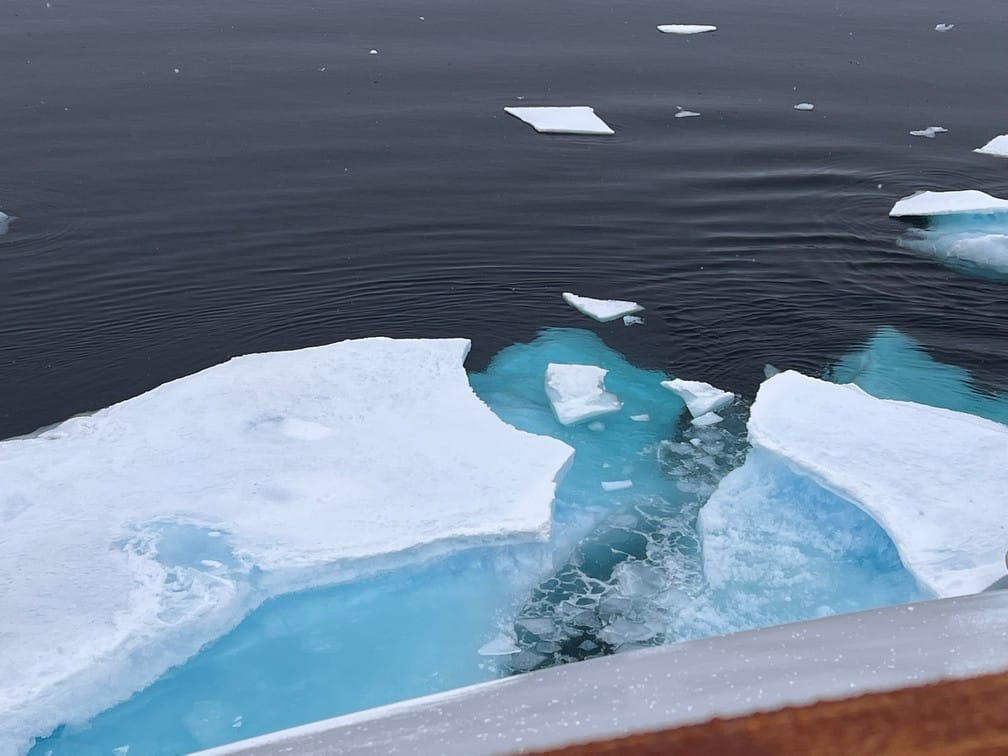 As we sail north and for almost two full days, the beauty of the area and sailing through some first-year ice, with the occasional ring seal popping up, has been wonderful.  Having just been in the Arctic earlier this summer I don’t feel the pressure to see my first polar bear or walrus. (Truth be told this is not the best itinerary for either of them…Eastern Greenland is more so.) So when the announcement came that there was a polar bear swimming ahead of the ship I did come out on my balcony and it was just too far for a photograph, but I know guests were excited.

I’ve found myself spending time with the two Inuit chefs that are onboard for the Inuit Tundra to Table Culinary Dinners as well as the Expedition Team. While they cannot dine with the guests, I have come to find that hanging out with them late at night at the Panorama Lounge Bar is acceptable!  I am as anxious to enjoy the chef’s talents as I am the expedition teams. Their qualifications and diversity truly are of an extraordinarily high standard.  Patience comes to all who wait…but I’m not going to lie, the waiting sucks! 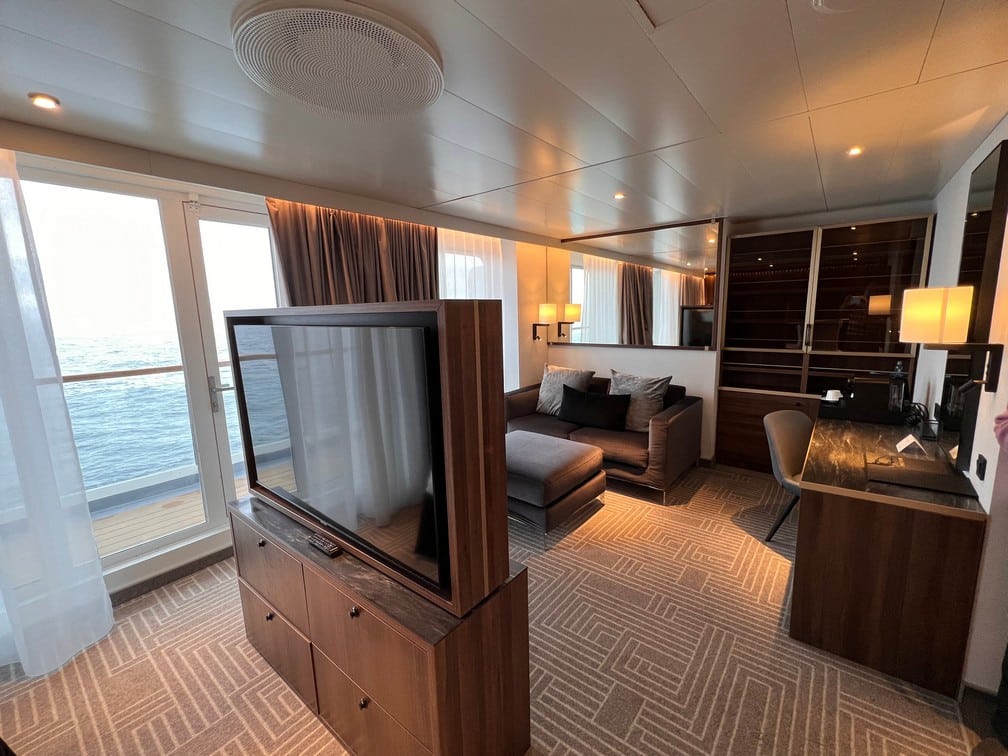 During our travel north, I did a tour of the various suite and will discuss them in a later article as I will both the ship’s culinary endeavors and those of the Inuit chefs.  What I will say for now is that while the seas have been kind, the Ultramarine has been as well.  She is very comfortable and attractive both in the suites and public areas. She has lots of outside deck space in addition to nicely sized balconies (in most suites).

We finally reached our second destination, Devon Island (obviously named after Devon, England), and more particularly Dundas Harbor.  It holds the now abandoned only settlement on the island where its last two inhabitants (Canadian Royal Mounted Police installed to protect against whaling and poaching) died in the mid-1900s by suicide and allegedly an accidental shooting oneself while hunting.  No mention was made of the Canadian government’s subsequent “resettlement” of some Innuits there in the 1950s or the indigenous people’s soon abandonment of that concept; returning to their original homeland. 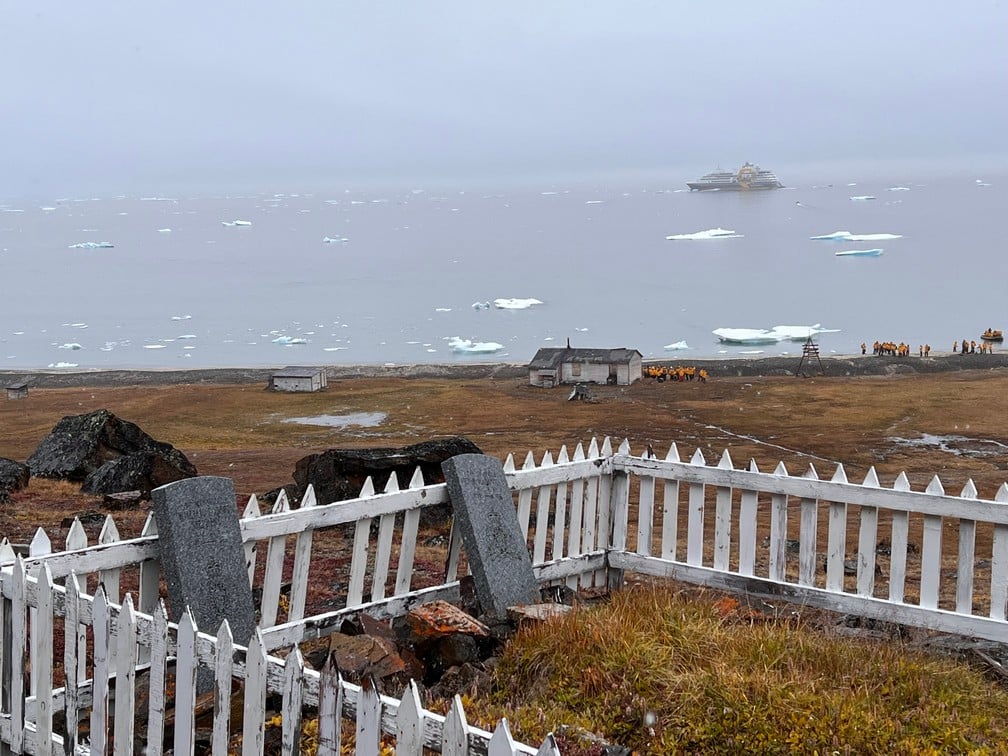 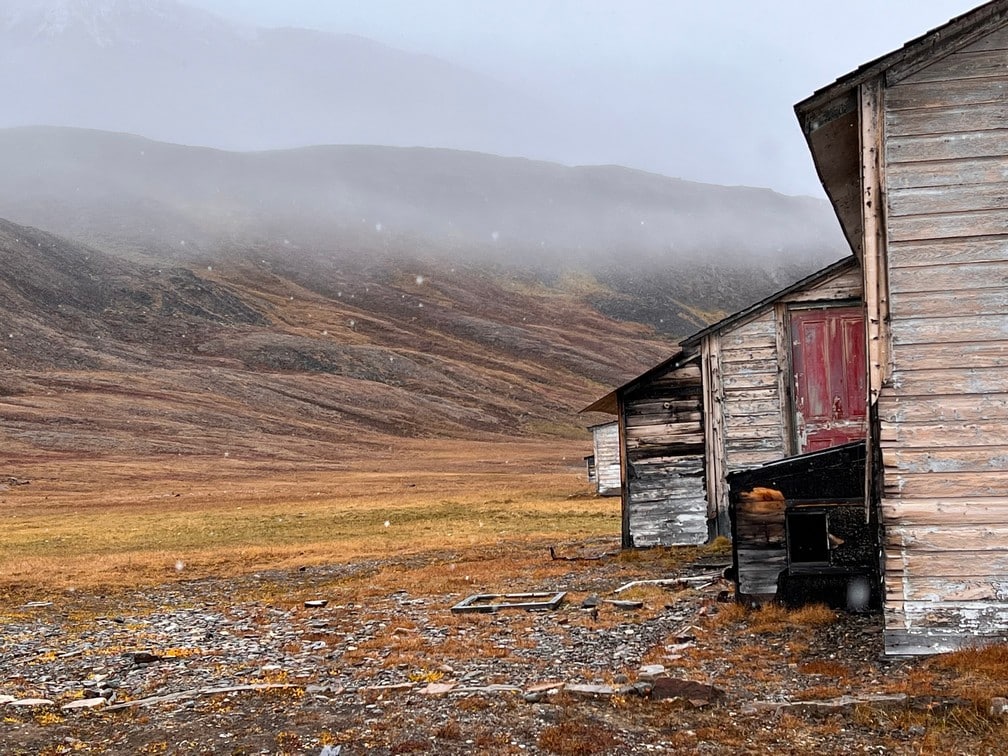 It was a cloudy day with just enough snow to make you know you are in the Arctic.  While Quark divides the ship into four Adventure Groups named after historical expedition ships, on this day the ship was divided into Walking Groups which the guests self-selected: Hard Charging, Medium Fast, Medium Slow, and Contemplative. Two interesting concepts for me: (1) Why one would come on an expedition with a focus on elevating your heart rate rather than experiencing the area?; and, (2) Why would you focus on “getting there” when every step you take on an expedition brings you to another “I am there/here now!”?  I mean the end of a path is not the journey…it is the end of the journey!  But to each his/her/their own. 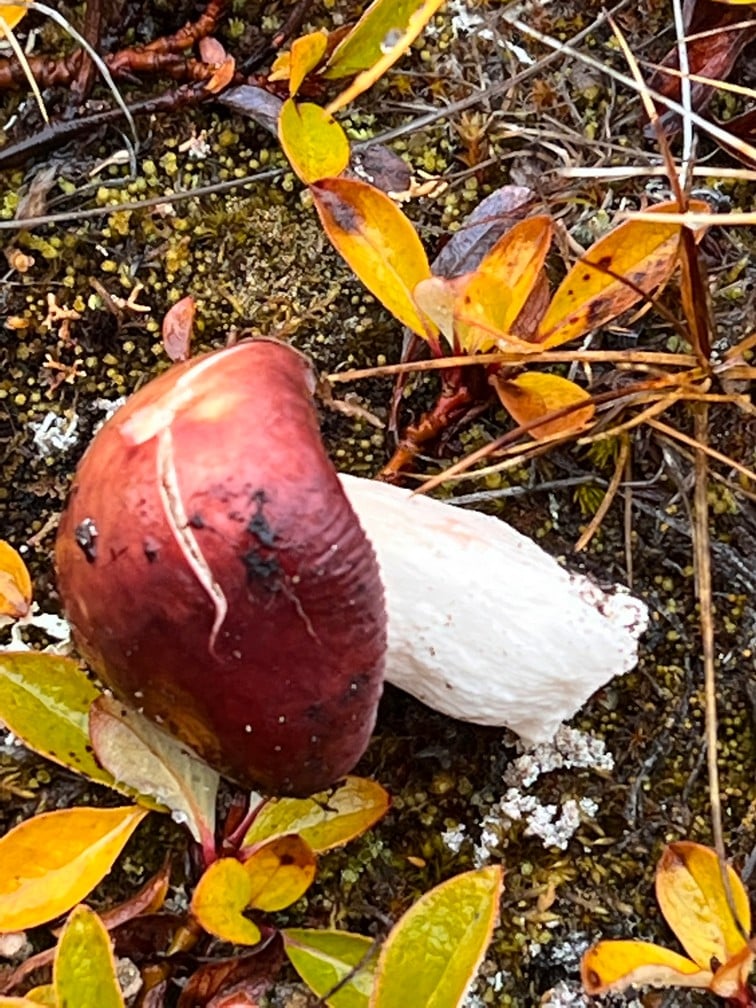 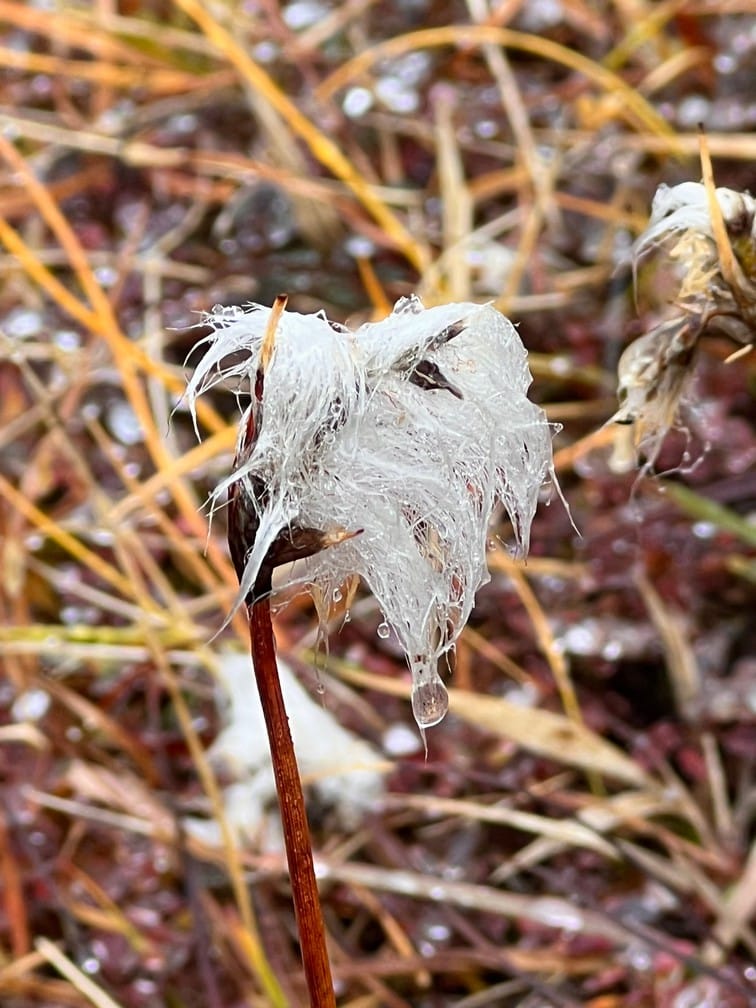 Our Medium Fast group wound up being “medium” as there were – as I expected – a few folks that either overestimated their condition or whose egos didn’t allow for them to be in a group with a more appropriate pace.  Regardless, it was a very interesting and beautiful hike of about 2.5 miles over rocks, tufts of mossy grasses areas, and gravel slopes. 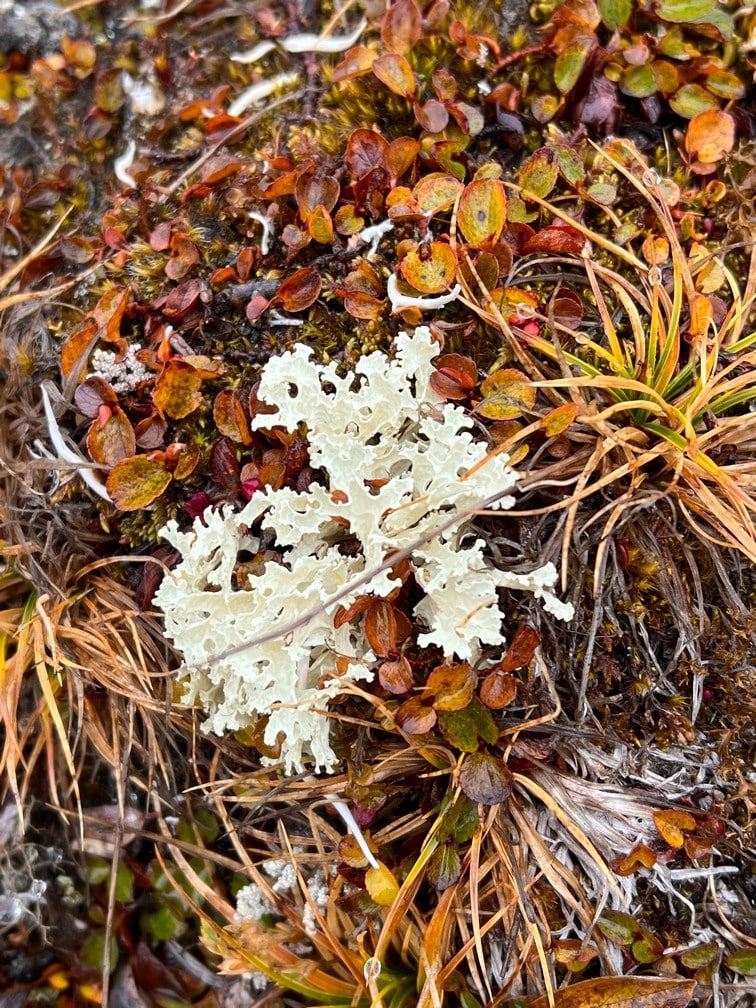 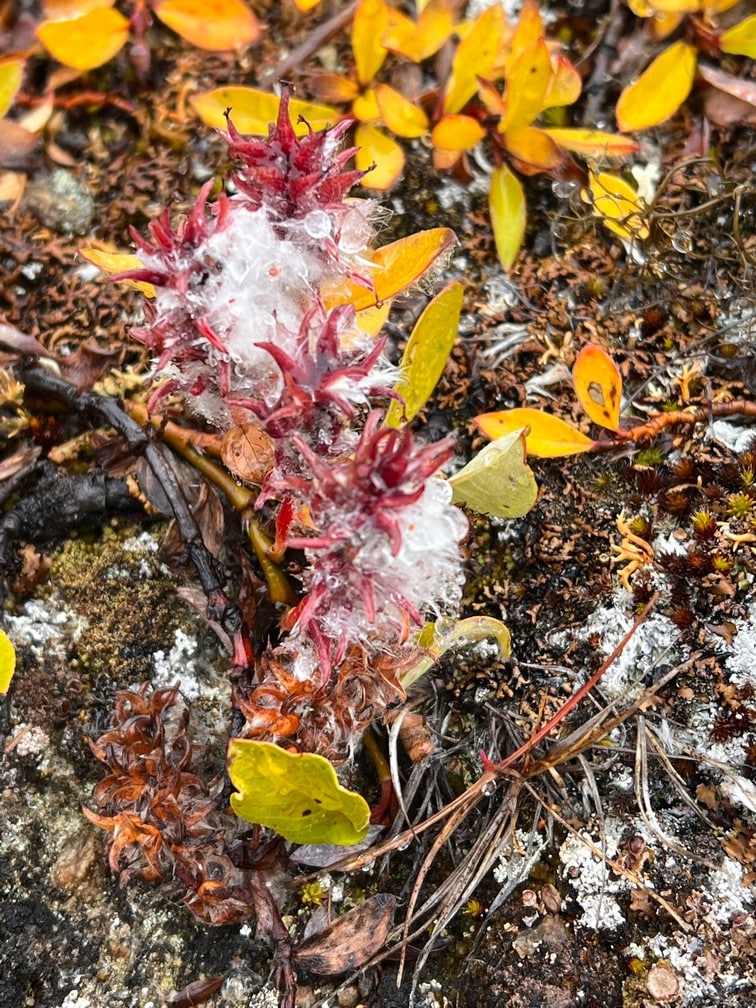 There was evidence of Arctic Hare, Arctic Fox, Muskox, and Geese, but none were sighted. (Apparently, Muskox are extremely hard to observe as they are still hunted and, thus, very shy.) 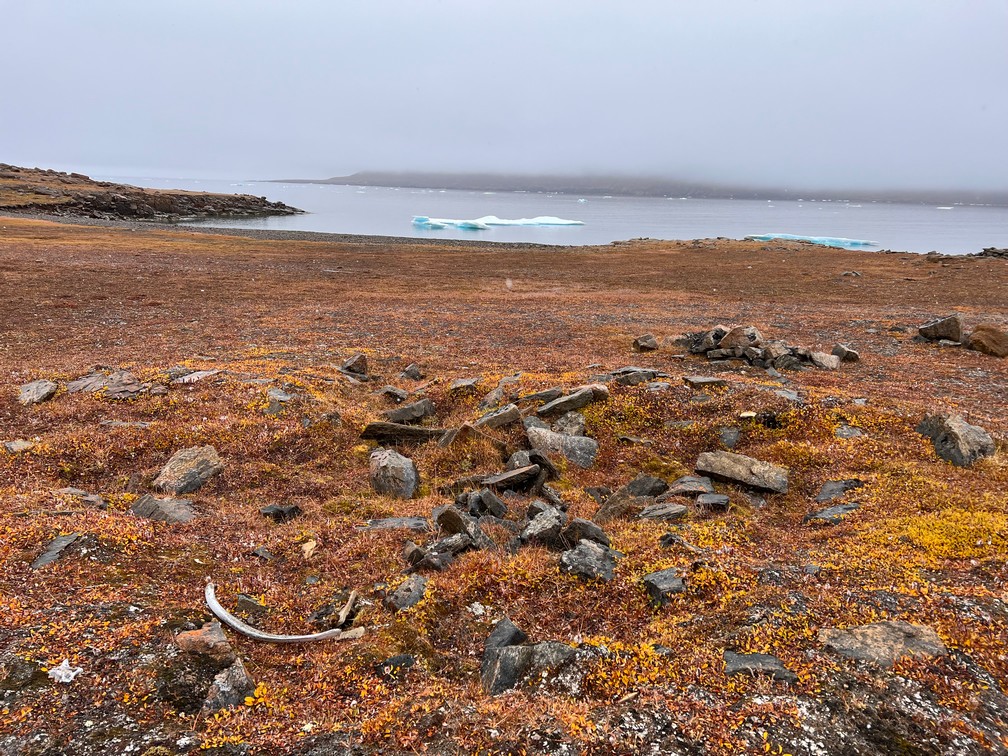 We did see the remnants of a few ancient Inuit houses (basically rocks in a circular formation that whalebones and skins would be stretched over) which gave me a far greater appreciation for how hard it had to be for them to survive…and it still is, even with the more modern but still fairly housing we saw the other day!

As we were exploring an area below a cliff face, a red-throated loon pair was spotted flying overhead and then settling into a pond. A bit later I heard a Peregrine Falcon, which I was surprised to find out lived this far north.  (I am not that expert to know the call of a Peregrine Falcon, only that some sort of hawkish thing was calling out. LOL)   It took a while to find him, tucked into a crevice way up high (so no worthwhile photo), but it was, for me, a bit of excitement.

Chatting with our guide, Fabrice, not only his many years of experience were evident, but also his and pretty much every guide’s loyalty to Quark Expeditions.  It says a lot not only about the quality of the Quark Expedition’s product, but its manner of doing business.

After returning to the ship, we were advised that Quark was going to mix things up a bit and have an early dinner so that we could go for a zodiac cruise along the face of a glacier afterward. While I know this was more of a “let’s get the guests out doing something”, being out in a zodiac in the dimming light was nice.

Plus, our guide, Sylvia, caught a couple of interesting jellyfish…and a chunk of glacier ice to inspect (and also good for late-night cocktails). 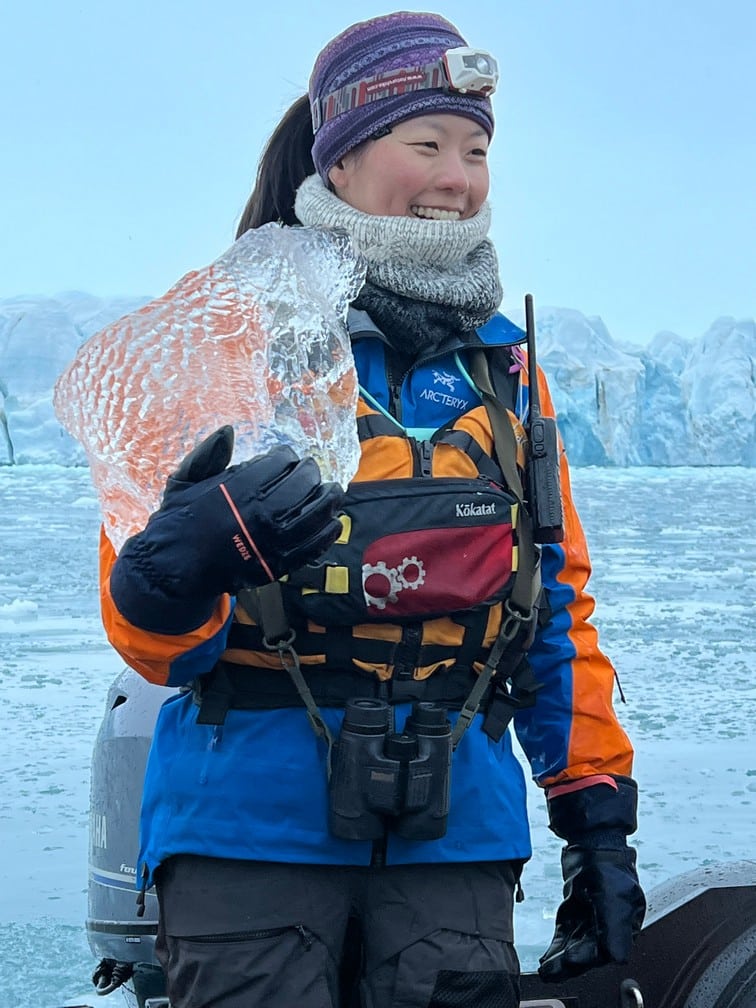 We also had a bit of a chat about fulmar’s and their ability to expel salt through a special tubular nostril on top of its beak. There are lots of them, but being common doesn’t make them any less attractive! 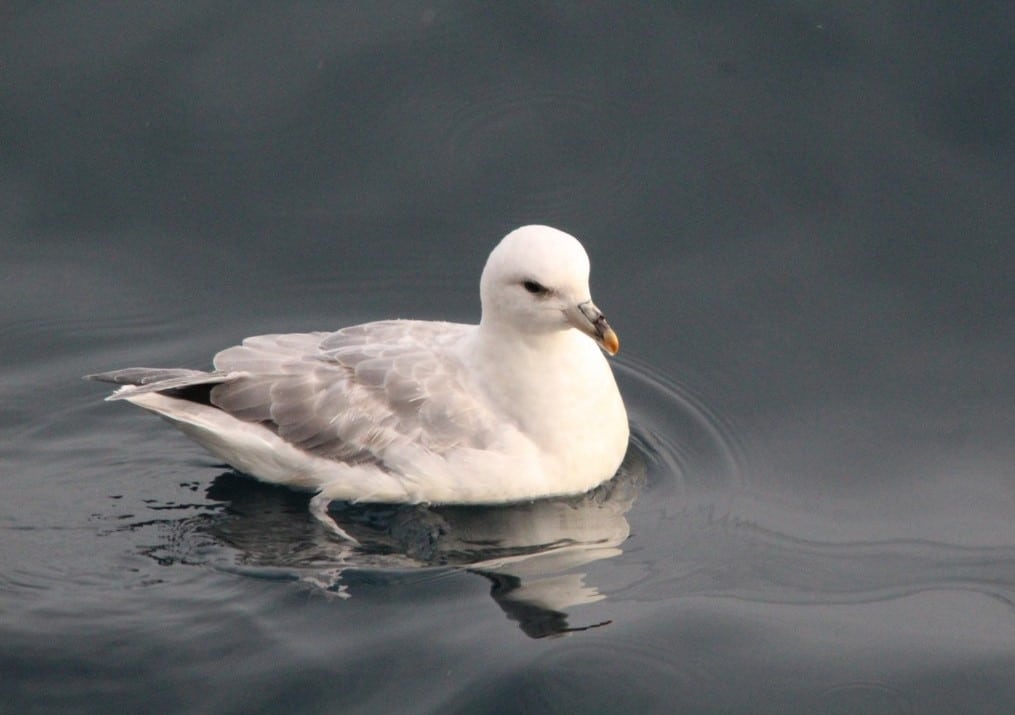 The next morning brought us to Radstock Bay, also on Devon Island, where the remnants of Thule homes (predecessors of the Inuit) were present. 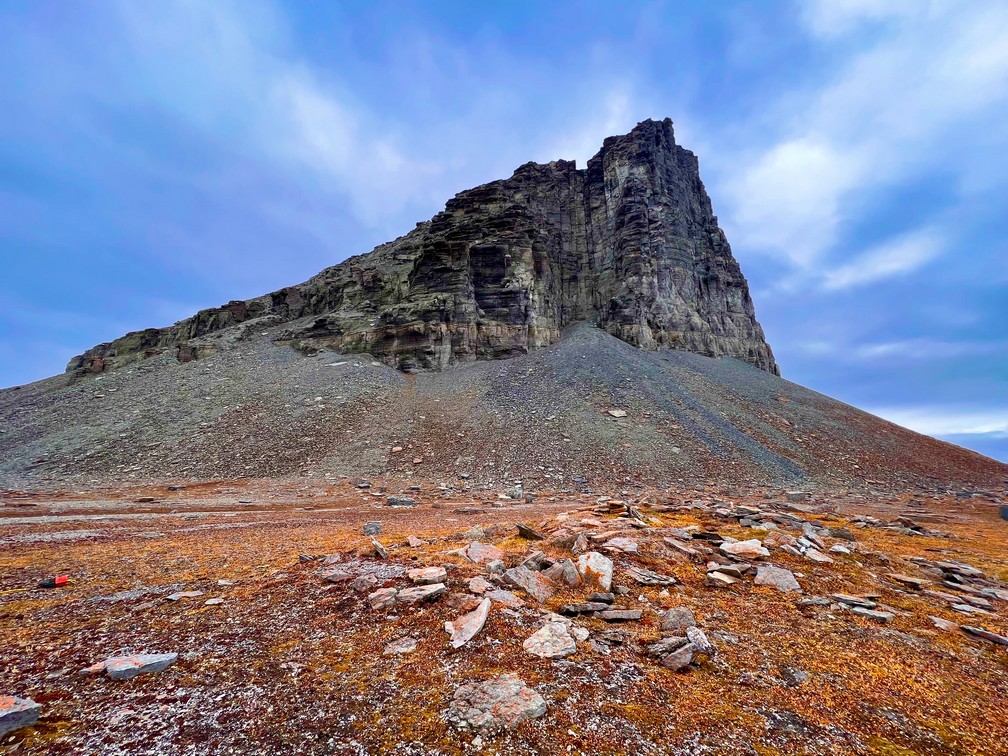 While they were interesting – and their impact on my better understanding of the harshness of living in the Arctic significant – what really grabbed me was the stark beauty of the area; the juxtaposition of barrenness and geometric patterns (mostly caused by geological events). 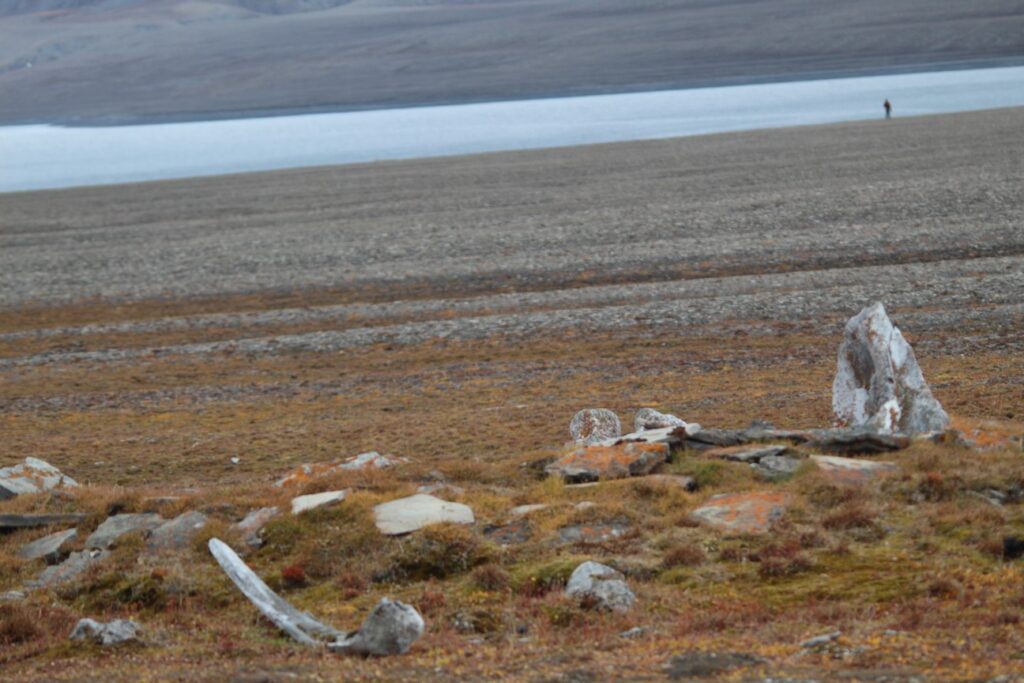 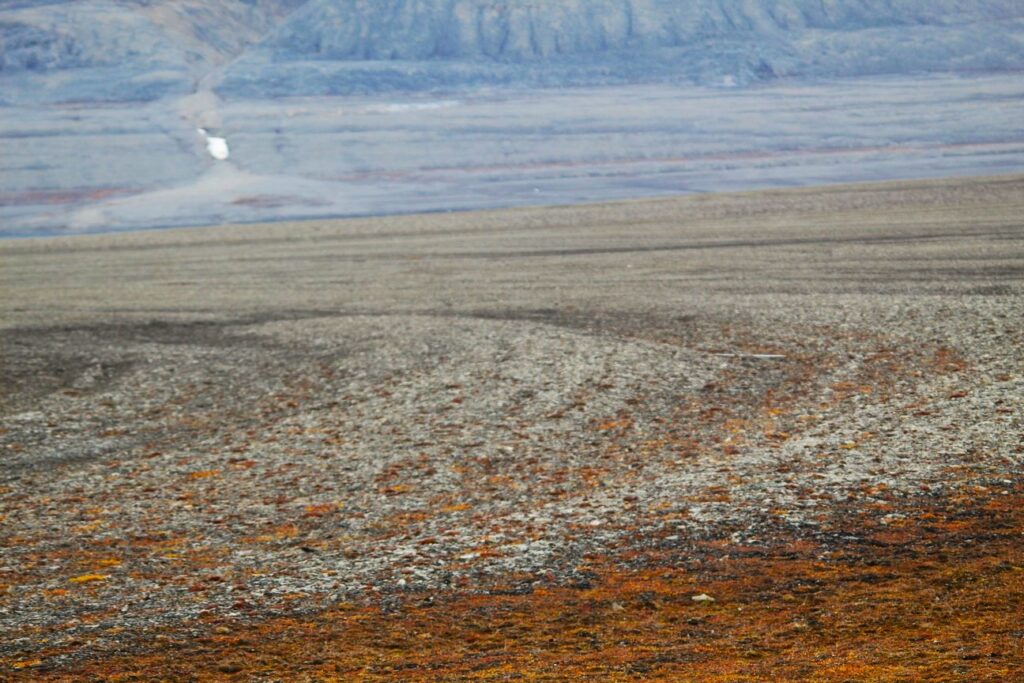 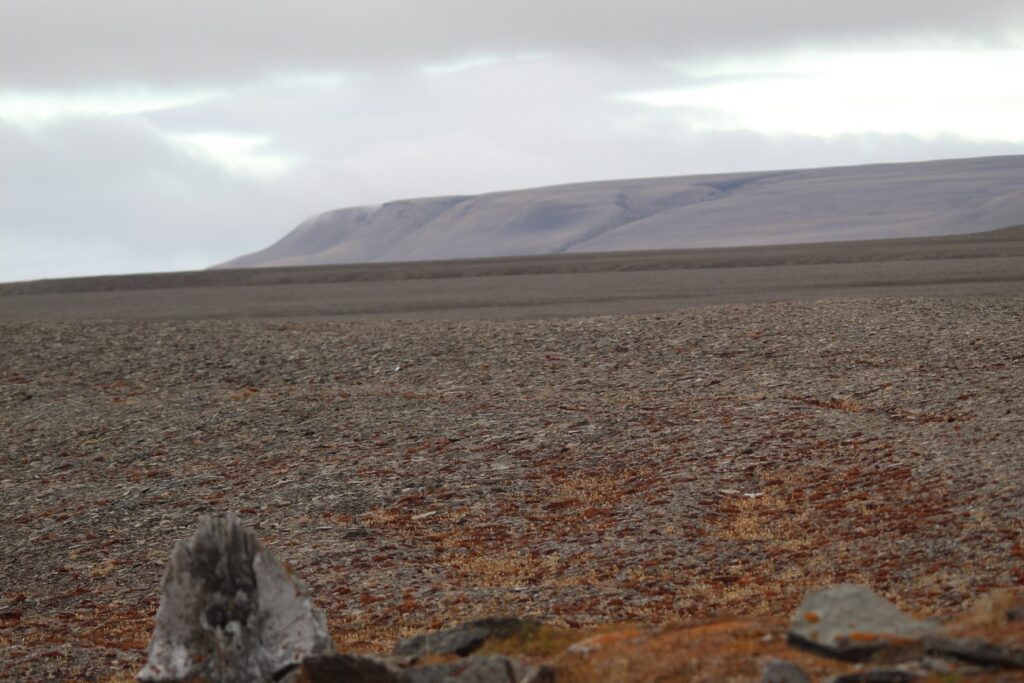 I also found a muskox hoof print which, I am resigned to accept, is the closest I will get to a living muskox on this expedition…though I do keep a slight bit of hope. 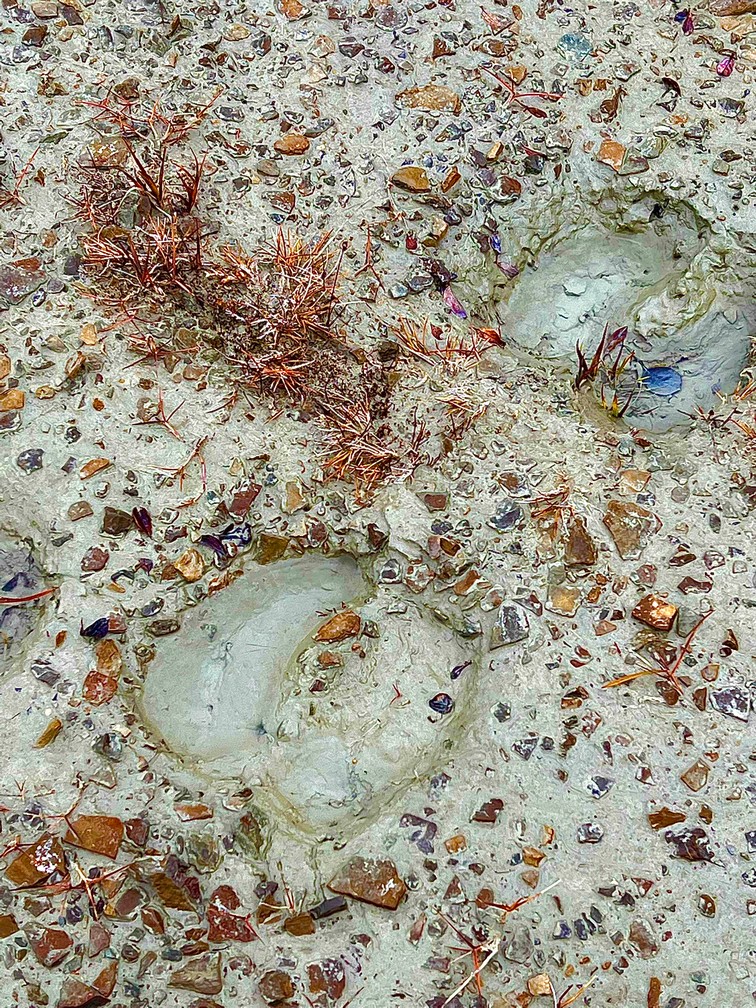 And then, finally, for all the obsessed and passionate: Beechy Island. It is located just off the coast of southwestern Devon Island.

This is where some of Franklin’s men were buried and, later expeditions came hoping to find him…including building a ramshackle house stocked with provisions in case Franklin found it. Along with cairns – monuments –  to those Europeans that followed him, but which made me think of the Inuit who truly lived on this land for centuries.  Seriously, did Princess Margaret need to have a monument to her visit built on this stark, but beautiful, island?  I know the concept of “Leave nothing but footprints. Take nothing but memories” wasn’t a thing back then, but…

However, that is not why I will always remember Beechy Island. It will be for the approximately 100 Beluga Whales that were swimming right near the shore on the other side of the island.  This was a classic, “Put the Camera Down!!” moment. Just imagine that after days of clouds, the sun was out with clear skies, there was hardly any wind, the water is crystal clear and you are up on a bluff looking down. And there it is, something that most of the guides, who have been here for years, have never seen: 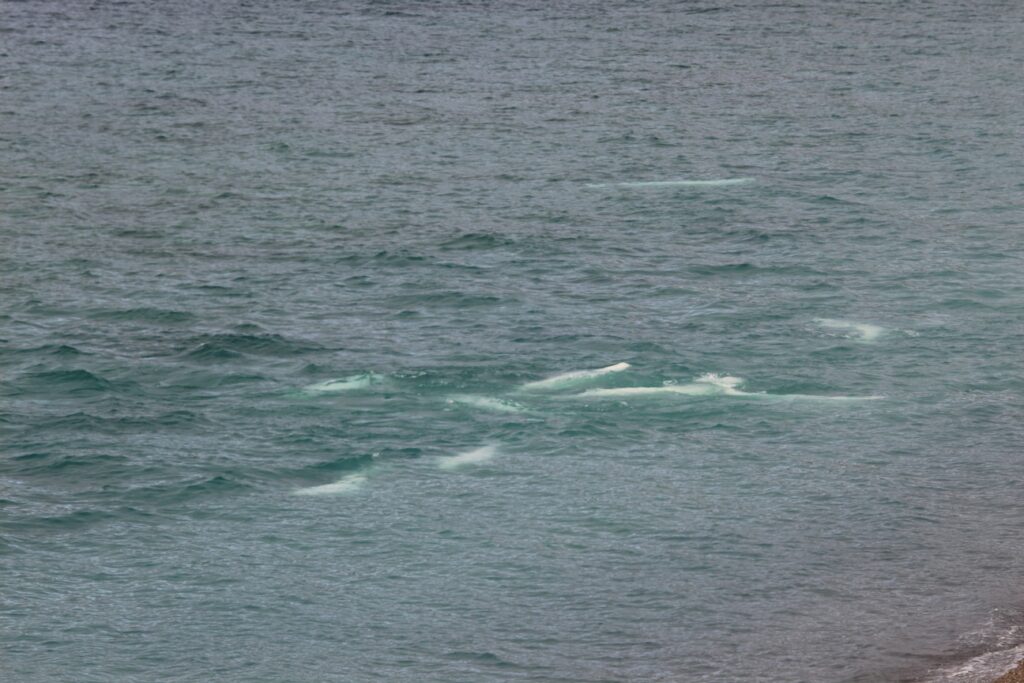 Wave after wave of beluga whales swimming past you, doubling back and riding the current faster past you the other way. Playing with each other. Rubbing their skin on the bottom to rid themselves of sloughing skin and to have a good scratch. 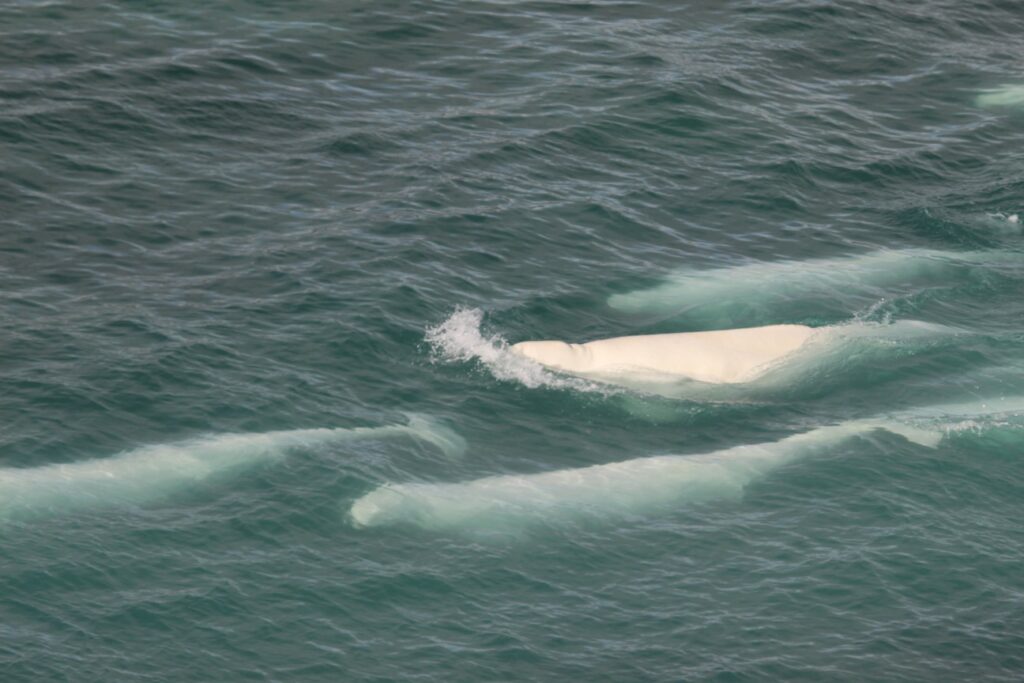 They just kept coming and going…including a couple of babies. Absolutely mesmerizing. 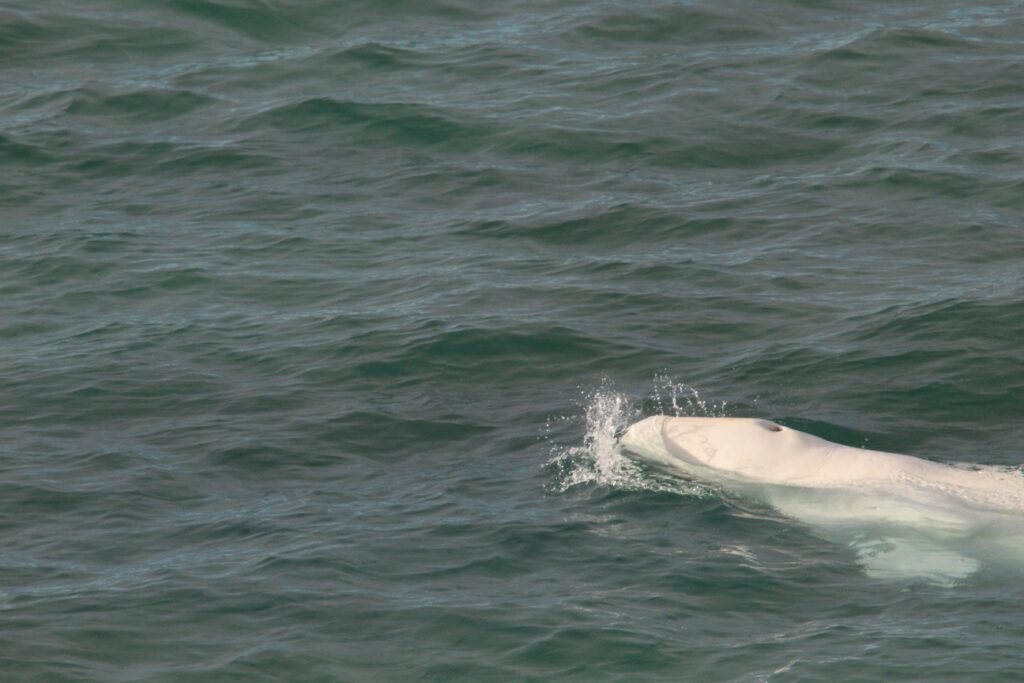 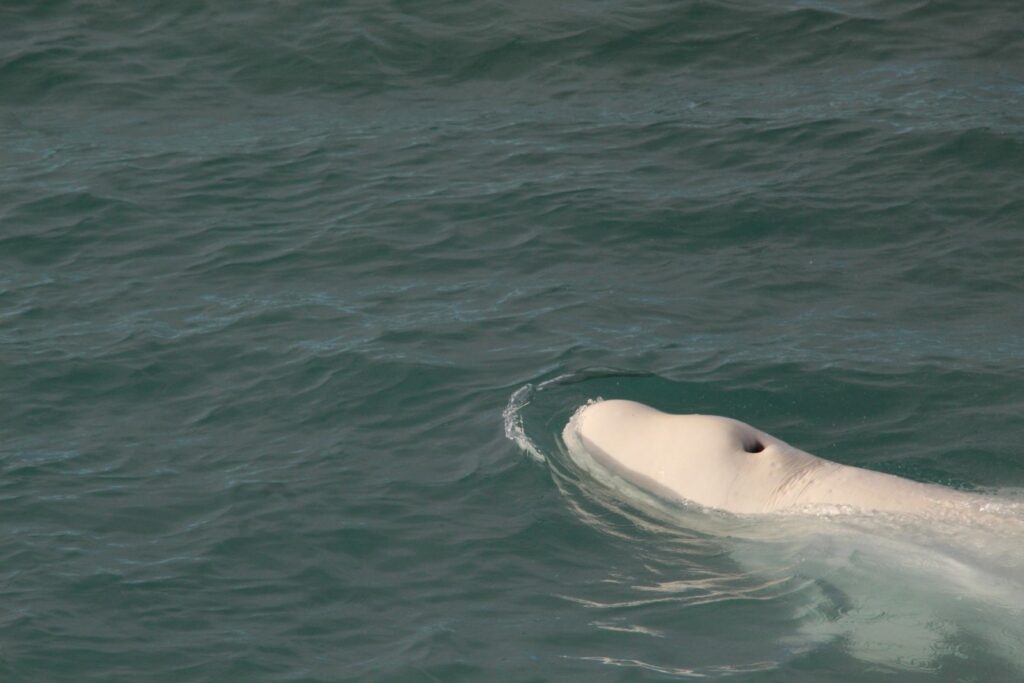 And why one needs to embrace the philosophy of Expedition rather than having an agenda.