Let me first address my heretofore glowing review.  I have always called it like I see it and this is how I see it.  As I have sailed on the Wind Surf, Star Pride, Star Legend, and twice on the Star Breeze, I have a pretty good idea of what the Windstar product was and was transitioning into.  I had expectations, but there is a difference here: There have been years of anticipation reading about the Star Plus Initiative and seeing computer-generated photos of the new venues. But there is nothing like seeing it in real life as it gives you more than a better perspective, but real-life execution. 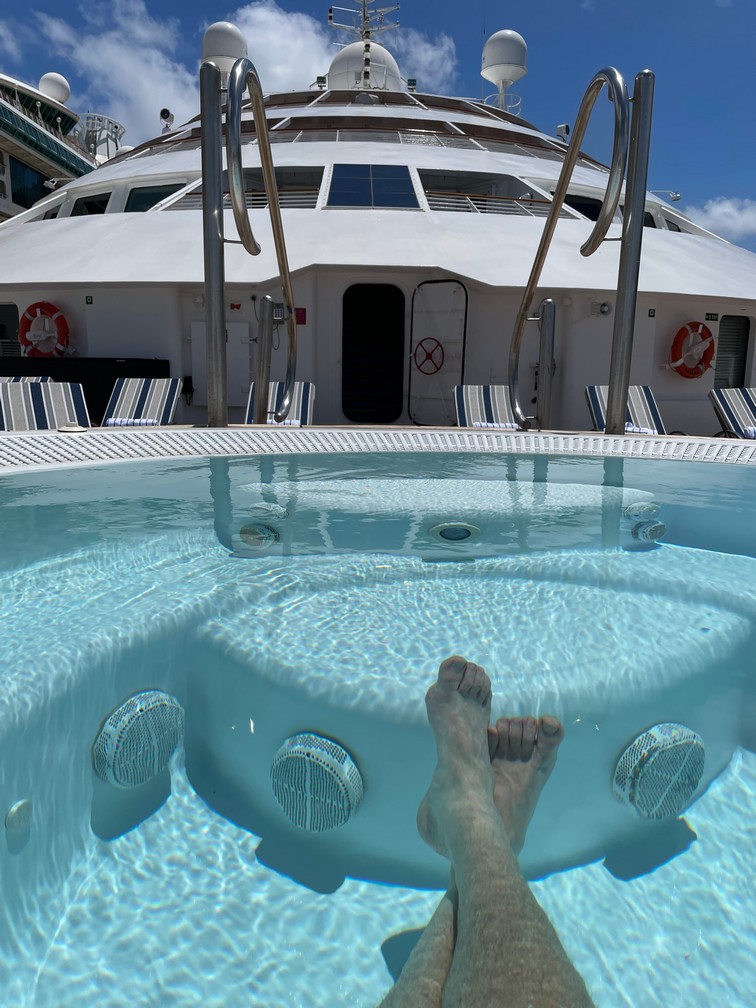 And that brings me to the crew. These folks have endured the ordeals of Covid-19; for the most part in far more difficult circumstances than the guests. They have been out of work for 1.5 years. And now they have been called upon not only to get the Star Breeze up and running, but to get the new venues and the new, more complex, menus executed and delivered. And they have been called upon to do all of that with the curveball of the vaccines not showing up and, thus, unexpected protocols up in place and guests pretty much never leaving the ship. When I see service that is almost near-flawless (within reasonable expectations as to what is considered “flawless”) and with the Windstar casual intuitive style, to say my expectations were exceeded would be an understatement.

My issues this past week were, and this is true, were pretty much limited to: (a) When you place a Windstar napkin down, the W should face the guest; (b) when placing a bottle of beer or wine on the table, the label should face the guest;  (c) the cushions on the Veranda should be set with a corner down rather than square so they don’t slip through the chair; and (d) the Burger Bar needs to deliver hot dogs and hamburgers ala minute. Seriously, you know I look at “everything” and that’s what I came up with…Am I detailed enough?  BTW, all four of those small issues are now in place…seamlessly and instantly.

So my expectations have been exceeded on both the service and culinary fronts.  So with that…

Fine Dining on Windstar is very much alive and well, guided by Corporate Executive Chef Graeme Cockburn.  The focus, however, is not on “fancy”, but “flavor”.  If you are desiring a complicated presentation with 10-18 different elements and culinary terms you have no idea what they mean, Windstar may not be for you.  HOWEVER, if you are looking for cuisine that actually delivers the true bold flavors the dish deserves, well then, it honestly doesn’t get any better than Windstar!

Five-Spice Asian Duck has house-made spice combinations that when toasted flooded the galley with incredibly rich smells and, more importantly, a culinary delight on your plate.

My Moroccan Glazed Shrimp with Brown Onion Fried Rice with Tamarind Ketchup was all about the rice, so much so I literally pushed the shrimp to the side so I could enjoy more of the rice. And, well, you know my love of the new Star Grill’s barbeque, smoke house and grill. Genuine, but more simple, presentations of Flavor, Flavor and Flavor.

I previously discussed the truly casual Cuadro 44 and Star Grill But what about the original venues: The Veranda and Amphora (The Restaurant)?

The first thing I noticed is that the waitstaff uses paper, as they do in all venues, to take your order…and in The Veranda the waitstaff just listens to your requests, writing them down out of site. There is something about this little detail, at least to this old guy, that makes your
experience more personal. You aren’t merely data punched into an iPad. I was surprised
it meant something to me, and elevated my dining experiences, but it does.  Yes, this is in large part because of the intimate size of the Star Breeze, but it had also been used on other lines before being more automated.

The Veranda has gone through a two-stage transformation since becoming the Windstar Star  Breeze. The first was to remove the stairs that blocked the middle of the outdoor area (and limited access to the outside portion) with the installation of automatically opening sliding glass doors and glass railings/windscreens. These made huge difference. But there was more that was needed; especially with the new midsection adding an additional 100 guests to be serviced for breakfast.

The original layout has basically stayed the same (the side trolley with hot items long gone), Windstar added a large buffet behind the original Veranda, a barista-manned gourmet coffee
station and two “hidden” more intimate indoor dining areas port and starboard.  (They are so hidden I walked by the starboard side one for three days without noticing…and that is me not noticing…and four days to find the portside one! 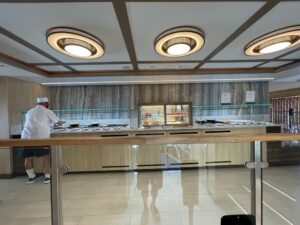 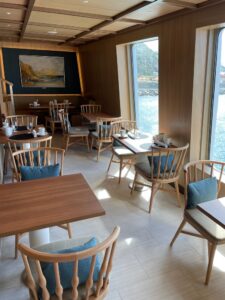 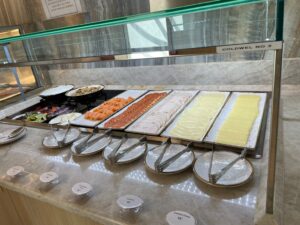 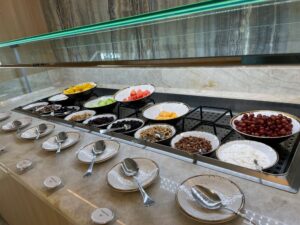 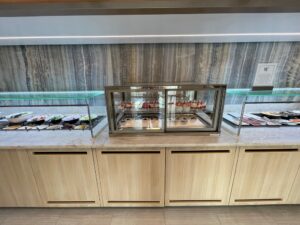 The breakfast offerings are plentiful and beautifully presented.  I  don’t eat French toast, waffles or pancakes (saving my calories for later in the day) so I don’t have photographs, but I didn’t hear or see anything other than positive. What I do have is granola and, of course, Poached Eggs. You want to disappoint me? Give me lousy pouched eggs. Windstar, however, did not
disappoint! 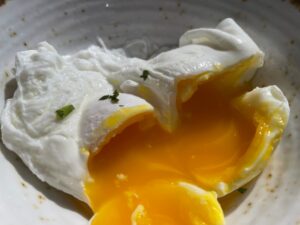 I previously mentioned that the freshly brewed coffee is excellent. It is refreshing not to have to request a French press or go to the gourmet coffee station to have proper coffee. Mimosas and Bloody Mary’s are delivered quickly as well.

My lunch on embarkation was perfectly prepared pasta, lots of garlic and crisp fresh bacon in a light fresh tomato sauce was excellent and beautifully presented. Another day it was a simple, perfectly, cooked fish with great (and hot) French fries. (I guess steak fries are only served at the Star Grill.)

The Veranda, however, is transformed into Candles for dinner and the menu upscales.  (For those nostalgic, on Seabourn the eventual innovation was to transform it into Restaurant 2; which carried over to the Odyssey-class ships before being changed to The Grill by Thomas Keller. Grill, huh? Windstar has the Star Grill! Ironic? Maybe.)  The physical transformation is actually minimal other than it is now a full plated service, more of a steakhouse style and a bit more formal service…along with an electronic candle on the table.

My first dinner – and I was “instructed” to order it – was a 40-ounce Tomahawk Steak along with New England Clam Chowder.  (Chef Graeme also slipped me a taste of the smoked duck being served at the Star Grill.) All the expected steakhouse side and sauces and some not so expected are provided along with a side of broccolini. My behemoth was presented to me before cooking and then when finished along with an offer to carve it for me.  I declined as I wanted the full experience!

As I wasn’t sure that I could consume the whole steak after my delicious clam chowder and smoked duck starters, I seriously limited my sides to excellent panko-crusted onion rings.  I am not sure why everyone around me was confident I would finish it (OK, I know…they’ve watched me have two meals at every meal trying everything out), but I did it; right down to the bone!  Yes, it was that good.

My second Candle’s experience was a perfectly prepared Herb Crusted Rack of Lamb and, as I mentioned above, the Moroccan Glazed Shrimp.

The one thing that was disappointing in the Veranda/Candles:  Desserts. Honestly, they are just mundane. Lemon tart, chocolate cake, etc. The cheese plate is very good, however. 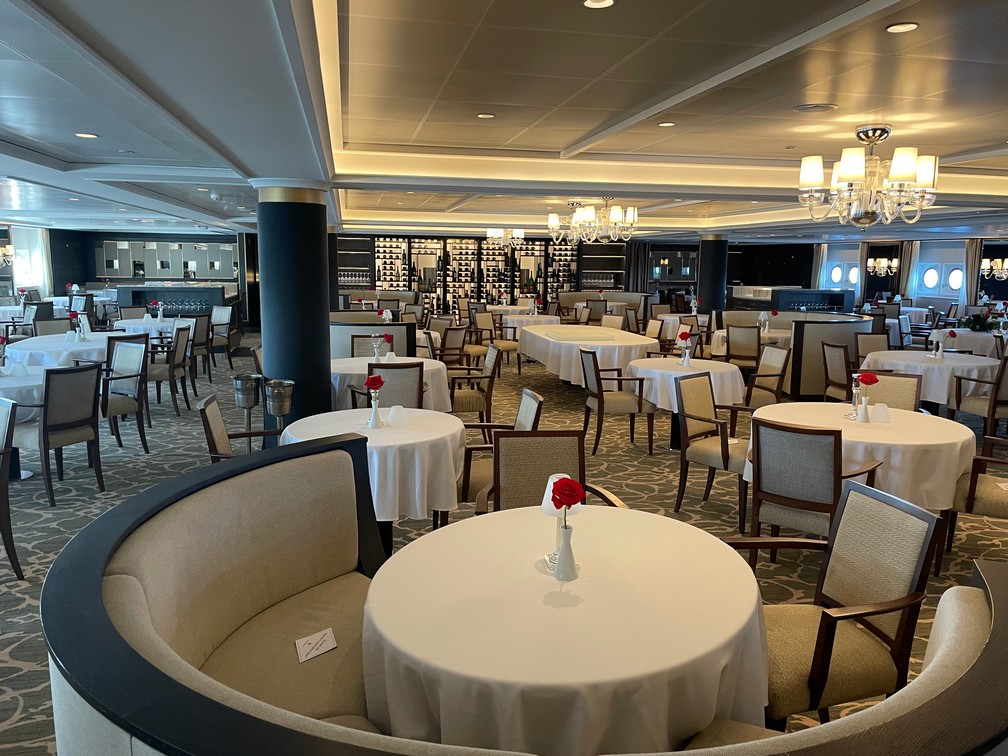 Amphora, the main restaurant, is the most formal space on the ship. It remains elegant and you are free to dress up or go country club casual.

As my time onboard has been limited and due to the reduced number of guests onboard, my experience in Amphora has been brief for it has not been open every night. I will note that in 2019 I had a significant number of dinners in Amphora on the Windstar Star Legend so you can get a more diverse showing of its offerings here:  Goldring Travel Experiences the “New” Windstar and its Star Legend Through the Orient – Part VIII – Reflections (It’s All About the Software; Not the Hardware!) – Goldring Travel

Things have, as you probably can tell, have only gotten better. I started with a very light Chicken Liver pate followed by an elegant and refreshing Watermelon Salad. 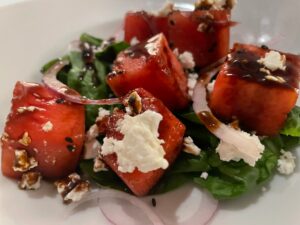 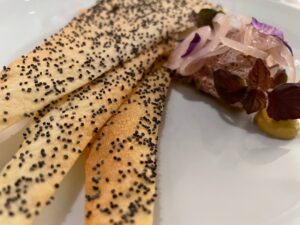 For my main course(s) I had Beef Wellington and Five-Spiced Duck, which was the standout. As I mentioned above, it is rare on a cruise ship that you have properly spiced cuisine as it allegedly has to be balanced for a variety of guests. Chef Graeme definitely shows off his Scottish stubbornness by refusing to compromise on his flavors, so know that if you want something less dynamic you must order accordingly!  (You know I was in my happy place!)

Dessert was an excellent chocolate souffle and a wonderful, properly sized cheese plate. (Yes, the same poppy seed flatbread was served in two courses. It was fine, but I did notice.) 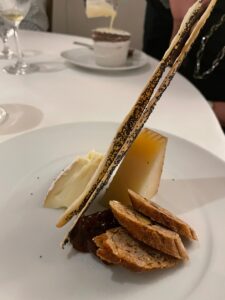 Room Service is provided 24/7.  You can order off the menu in Amphora any evening, so if you don’t want to leave your suite it is not a problem.  (And, if you recall from my earlier article), there is a drop-down table in your suite, so you can both dine in proper comfortable chairs – not one on the sofa – at a proper table.)  There is a diverse All Day Menu and a fairly robust Ovenight Menu.  One miss, for those who enjoy breakfast in their suite, is the lack of a full in-suite breakfast; continental breakfast only. 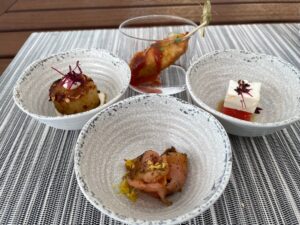 Outside of the dining venues, Windstar provides passed hors devours frequently. They are beautifully presented, diverse, and tasty; presented in individual dishes, though I am not
sure if this part of the Covid-safe protocols or a standard practice.

The Star Breeze staff also provide their friendly, intuitive, service on the open decks. I was quickly served while “testing” both “my” whirlpool on the bow as well as the midship one.

As I complete my week on Windstar’s Star Breeze I can unequivocally state I have been truly well taken care of. Friendly, intuitive, more relaxed service. Incredibly flavorful and diverse culinary offerings. A strong wine list. And, among other things, a truly all-inclusive experience.