These are all luxury cruise lines (and, yes, I now include Windstar in the mix) and, yes, Seabourn and Windstar share certain elements and history (both hardware and software), but – if you think about it – each cruise line has developed over the years from being one thing to into another. Seabourn was the first small ship ultra-luxury all-inclusive cruise (not ocean liner) experience that now is a larger (but not large) ship experience. Windstar has gone from barefeet and rum punches to a legitimate worldwide cruise line to well…Read on! 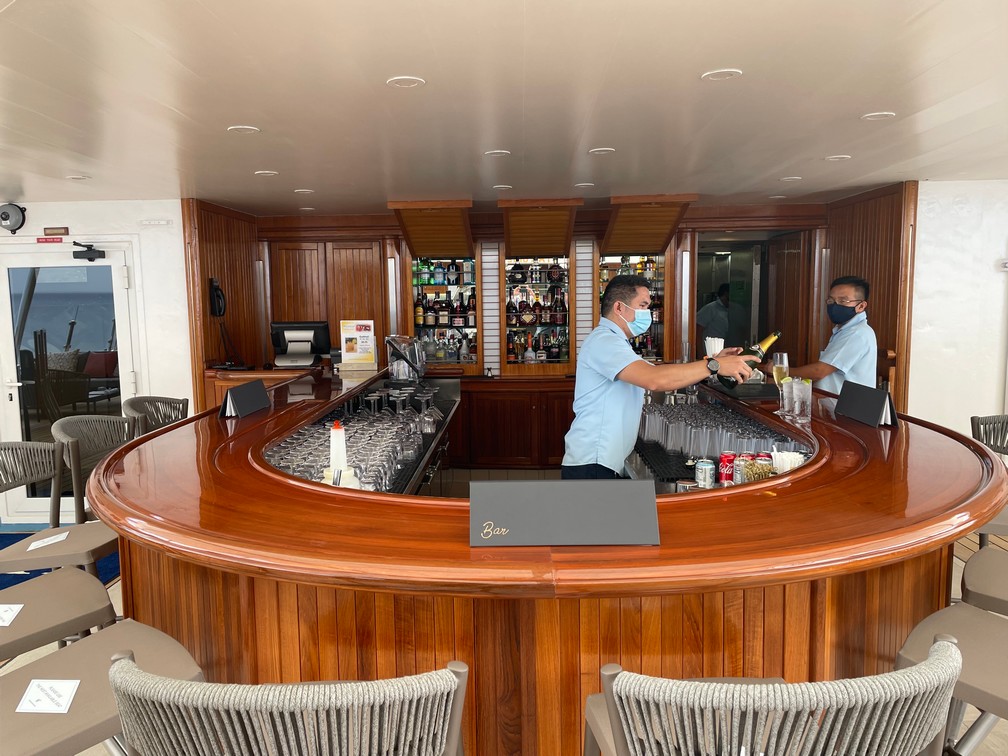 Windstar Star Breeze’s Star Bar. No longer the Sky Bar and no longer overlooking the deck below.

If you think about it, and I want you to, you can’t really compare the Seabourn “hardware” experience on those ships to the one on its current ships. Yes, there are a number of similarities, but also a celebration of many of the differences…starting with the, to give perspective, a vacuum-tubed television with a channel that rotated movies, then VCRs, then DVDs, the flat-screen televisions, to now dozens of On Demand movies and numerous television channels.  But if you want to compare the hardware, well, after the Windstar $250,000,000 Star Plus Initiative stretching the ships, adding two purpose-built Restaurants, a modern Pool, a large state-of-the-art Fitness Center, a larger and modern Spa, incredible Showers, etc., etc., etc., they are simply far superior  and truly modern ships.

But, alas, as often said it is not just about the “hardware”, but the “software”.  Windstar, through all its iterations, was a small sailing ship “180 Degrees from Ordinary” experience, but is now two categories, the relevant one here being a small ship, more casual, genuine luxury cruise experience.

I must call out the Windstar Star Breeze crew as being truly impressive; not only as people, but as casual luxury software performing nearly flawlessly. They endured the Covid-19 ordeal under conditions far worse then you or I, had literally no income for 1.5 years, came back to work only to be at sea for nearly two months before seeing a guest, then had to learn entirely new systems on an expanded ship with a huge number of new facilities and then…so frustratingly…had to shift everything to cope with their vaccine not showing up.  And with it all, I saw virtually flawless service…and not only for me, but for the entire ship.

So with that out of the way, kinda sorta, the reality is that there is a very significant contingent of former longtime Seabourn executives that now call Windstar home.  Each of them, from Chris Prelog, Windstar’s president -and previous Windstar President John Delaney – Peter Tobler (Director of Hotel Operations), Guenter Steinbrunner (Corporate General Hotel Manager) and Graeme Cockburn (Corporate Executive Chef), and others have been given a freedom to not only express their passion, but to execute and deliver upon them.

To be honest, I was not expecting the level of design, fit and finish, and uniqueness that Windstar and its team produced. Even with my shipbuilding background, knowing the issues with the triplets (including the regular flooding of my suite and other hardware issues on my Star Legend cruise:  Goldring Travel Experiences the “New” Windstar and its Star Legend Through the Orient – Part VIII – Reflections (It’s All About the Software; Not the Hardware!) – Goldring Travel) and all the hype, I did not truly understand the extent of the refit/stretch, the amount of thought and care went into each of the new spaces and, importantly, the execution!  (It takes a lot of oversight, made much more difficult with the Covid-19 ordeal, to assure the vision becomes a reality.)

As you will read in my earlier articles:

Windstar Star Breeze Inaugural: Part Deux – I. What to Expect When Preparing for My First Post-Covid Cruise – Goldring Travel

pretty much every element of the Windstar Experience has been elevated and, in many cases, expanded.

Cuisine is an interesting topic; especially because Windstar has really gone “180 Degrees from Ordinary” not only with its dedicated full-on Catalan experience at Caudro 44, but its truly unique Barbeque at Star Grill (a misnomer in my opinion!) with two dedicated smoker ovens and ever-changing menu (as in every lunch and dinner over seven days).  These are two of my favorite culinary luxuries and both were delivered flawlessly and at a much higher standard than I anticipated.

But if you are looking for a more fine dining experience, Amphora and Candles are your options. As I noted, however, the quality and presentation are most certainly there, but the menu selections and complexity of the dishes are more limited than you will find on other luxury lines; noting I have Seabourn and Silversea clients, and myself, that have been more than satisfied with the offerings.  (The Veranda is quite nice for breakfast, but I believe it needs to improve its lunch offerings and presentations. Again, tasty, but just not always hitting the luxury cuisine level.)

The wines offered as part of the All-In Package (beverages, wi-fi, gratuities, and laundry) are quite acceptable, but the premium wine is was surprisingly strong with many lesser-known and high-quality offerings. There is also a strong selection of spirits, but not as diverse as you might find on other luxury lines; something most guests would never notice but I did.

Service was as good as it gets as far as warm, friendly, and efficient goes. There is a casualness that I find charming; formality just not being a Windstar “thing”. But don’t let that casualness be misinterpreted for a lack of style or respect. It is anything but!  There were regular examples of intuitive service; my favorite being after my first dinner at Caudro 44 the server came up to me and said, “You would you like your whisky with three ice cubes now?”  I also truly appreciated when dining in Amphora and Candles the waiters surround the table and serve everyone at once; a little show that seems to be slipping away on some other luxury lines.

In keeping with its new luxury status, I would like to see Windstar become an all-inclusive product…with a twist because of its also offering the very different sailing yacht product: Offer two prices without a confusing array of packages: Ala Carte and All-Inclusive.  The historical Windstar guests will more than likely continue with ala carte pricing, but the new luxury guest trying Windstar will not be off-put by the concerns of “nickel and diming” with an all-inclusive option.

And that brings me to what I see as the inherent inconsistency between Windstar’s power yachts and the sailing yachts. Having experienced and enjoyed both, there is no mistaking the experience on one being the same as the other. Those differences are so significant that a discussion of same deserves its own article.

In conclusion, Windstar’s Star Breeze and her sister-ships, Star Legend and Star Pride, are legitimate entrants (re-entrants?) into the luxury cruise market.  It is a unique luxury product where you can enjoy New York deli quality pastrami, a Barcelona-transported Catalan culinary experience, a fine dining experience…in a casual experience with, should you so choose, no ties, jackets or pretense.

There is nothing like an intimate experience on a Windstar power yachts.  Seriously!